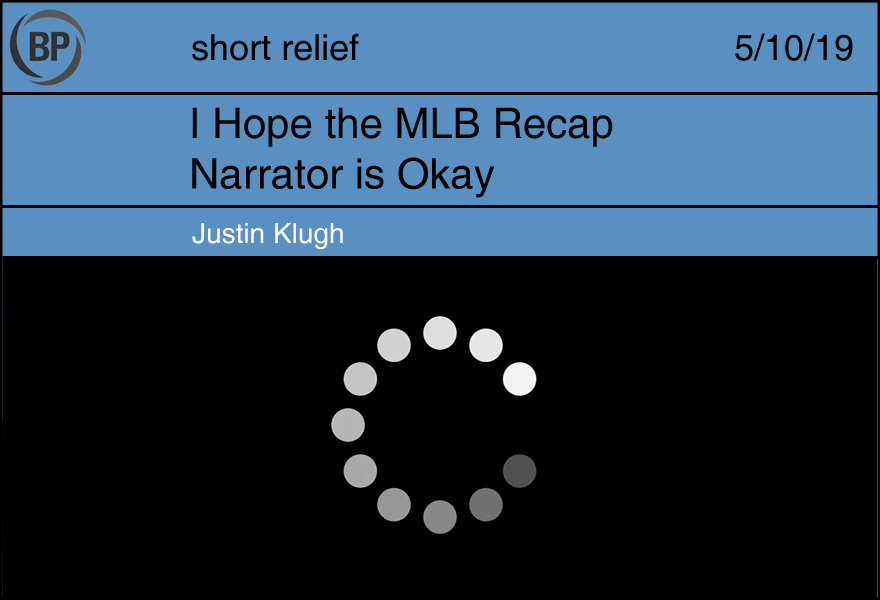 Look, I’ve got no idea what’s going on at MLB HQ. The Mishandling of Everything Committee is hard at work, turning Rob Manfred mid-sleep night whispers into bylaws. The mascot spaying and neutering division has fallen way behind. People are accidentally ingesting baseball weightlessness serum and floating into ceiling fans. Who knows. All we have are very accurate-sounding guesses like these.

But one thing that I have noticed is that the guy who used to narrate game recap clips on MLB.com seems to have lost his job to some rollicking stock music. He used to play a prominent role, introducing, outroducing, relaying exposition and context to the crucial moments of a game, but little by little, he became less and less of a factor, going from talking over clips, to simply introducing them, to fading away entirely. Somewhere along the line, MLB decided they could just let the highlights tell the story themselves, or what is more likely, deduced that they wouldn’t have to pay someone extra for talking over them.

“Hey, Tom, c’mon in. Now, I was against this the whole time, but I’ve just gotten word that they’re going to replace you. With who? Well, with no one. Actually, O take that back; it’s with a playlist of stock music that upper management is calling ‘some real earworms.’ Anyway, baseball is a simple game, Tom. And what better, purer, more American way is there to tell its 10 or 15 nightly recap stories by letting the clips play out in front of our viewers all on their own, with no intrusive voice talking to them like they’re idiots? Baseball fans aren’t idiots, Tom; they’re just adults who cosplay as younger adults through whom they’re trying to live vicariously. We just need America’s pastime, being watched by Americans, backed by the soft beats and electronic hums of music generated by an automated laptop in a Korean sub-basement.”

Based on what we know about the culture at MLBAM now, he was probably aggressively escorted from his overseer’s office, re-chained to his work station, and forced to finish his 36-hour shift while a Centurion pounding a mitt walked back and forth through the cubicles rows.

Where’s he supposed to channel that energy? All that playful commentary on nifty defensive plays, pitchers escaping jams, guys tripping and getting covered by tarps, just dying inside of his head. I hope he’s narrating his morning routine, just to keep himself warm.

“The alarm clock goes off it’s time for another morning here in Secaucus. It’s Tom taking on Monday, a little short-handed after staying up last night to worry about the future of his career. We start in the bottom of the first, as Tom forces himself out of bed and into the bathroom, where he doesn’t waste any time jump starting the offense. [toilet flushing] Tom came up again in the second with a chance to add to his lead, until he dropped his toothbrush behind the toilet. A costly error, it turns out, as Monday blows the game wide open as his toaster oven bursts into flames after repeated warnings from his roommate that there were too many crumbs in it.” 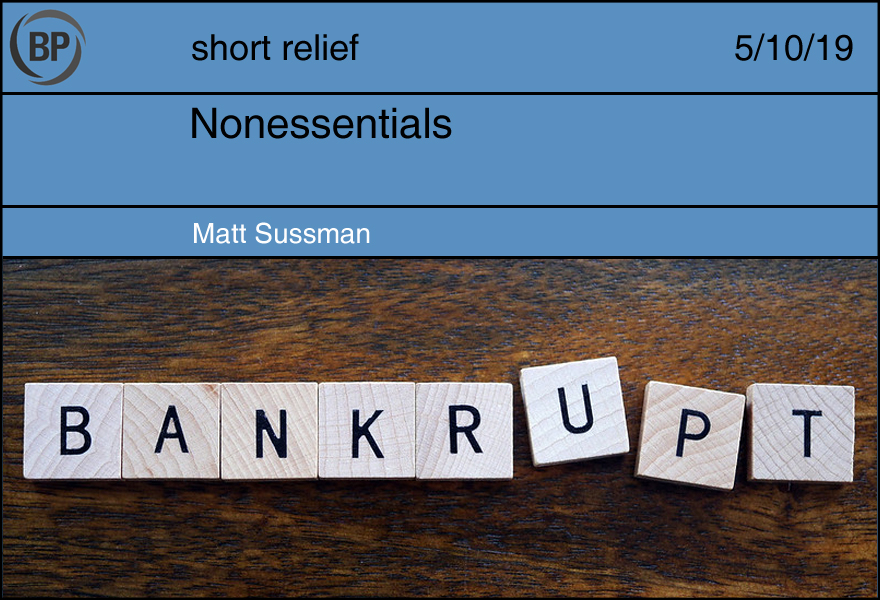 You’ve probably noticed that your favorite baseball team failed to spend meaningful dollars on really good baseball players, and as a result they have blown late leads, scored not nearly enough runs, and generally has stunk up the division. Tanking is one theory. Another is that the modern baseball team just doesn’t know how to handle a pocketbook.

We did a study and noticed some exorbitant purchases every year that every team can probably cut back on, and therefore sign freaking Dallas Keuchel and Craig Kimbrel. Thanks to USA Today for the inspiration, because we once again fixed baseball using math. 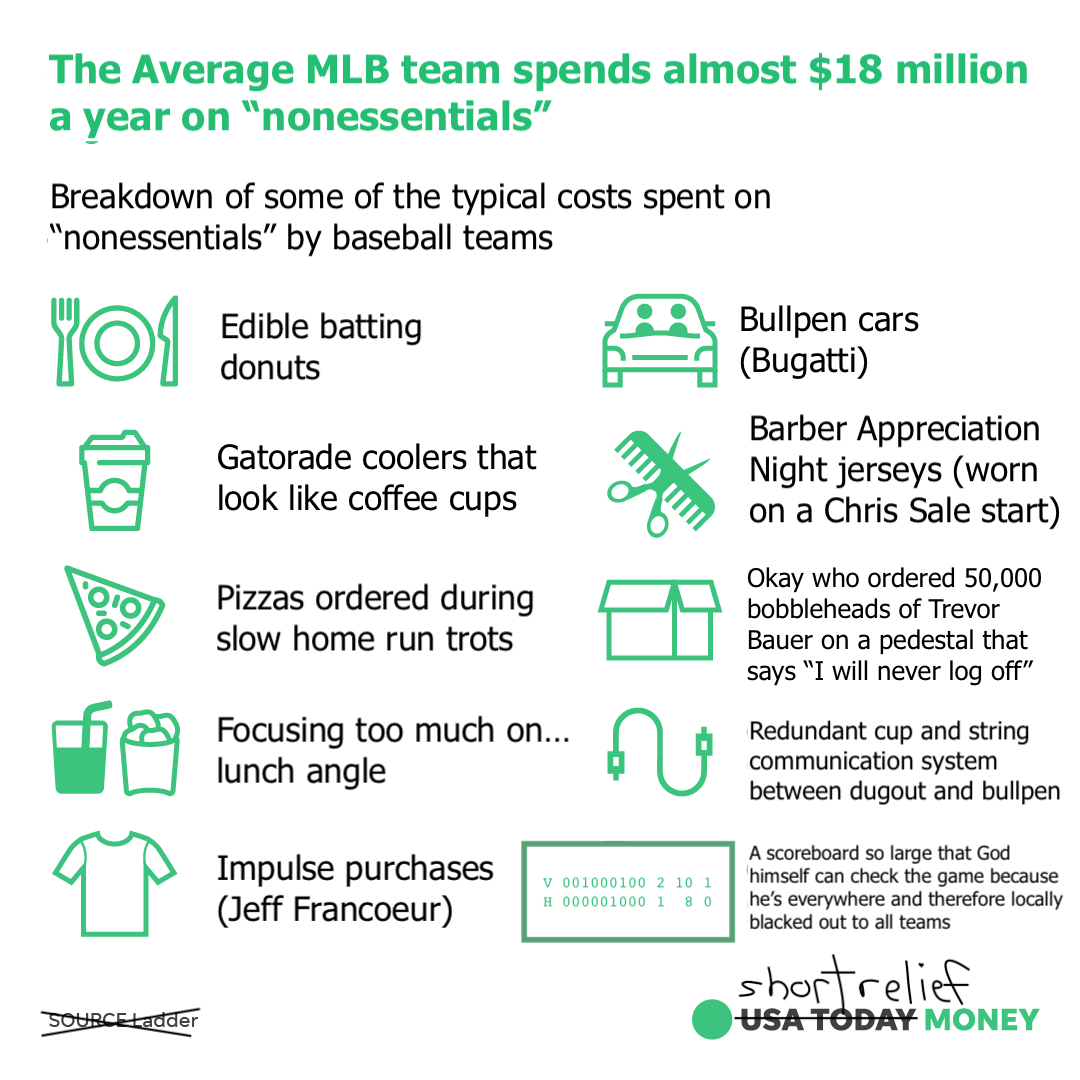 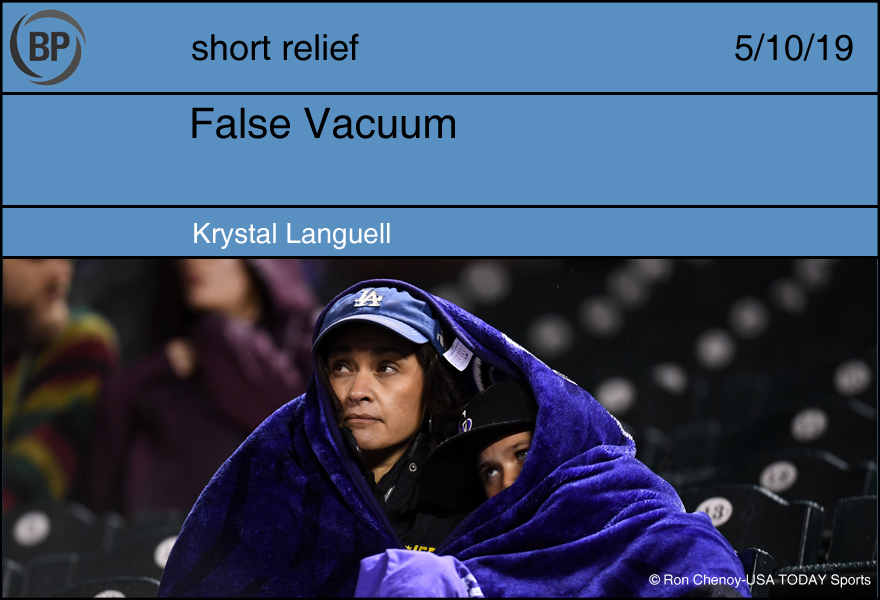 Cold weather baseball
brings me a blown save due
to inexperience and mistakes,
and they say unified string theory
isn’t a metaphor but a landscape
of vacuums and strings.

Ticket prices fluctuate this early
with weather and streaks. The market
is moody and we human beings
perform miracles any time we muddle
through. Our incompetence makes
me grateful to be alive. A pitcher
freezes, forgets to complete the circuit.

Stop talking to me about corners.
Emotions do not meet at corners like
the happy, healthy Walgreens.
Men and their talents are not like a
cross between a young Verlander
and last month’s Mookie Betts.
No new book is Jonathan Franzen
meets Interview with the Vampire meets
The Four Quartets. Knock it off.

Come, fly on a plane to look at this house
someone important lives in. What an
accident, the big limestone halls that
deteriorate if rock salt touches the surface.
Not metaphor then but strict parallel:
Jimmy Cliff said the harder they come,
the harder they fall. Then each person
is their own wild disaster, each one
world champ of something or other.
Let’s check our notes here, I believe we
were discussing sports. See, my unstable
landscape has room for your false vacuum.
If this is the best of all possible worlds,
I’d expect more grand slams. It’s a theory.

You need to be logged in to comment. Login or Subscribe
Cameron eadie
Strap yourself in a bullpen cart. Fill it full of rock salt. And no way will you float up to the ceiling fan.
Reply to Cameron