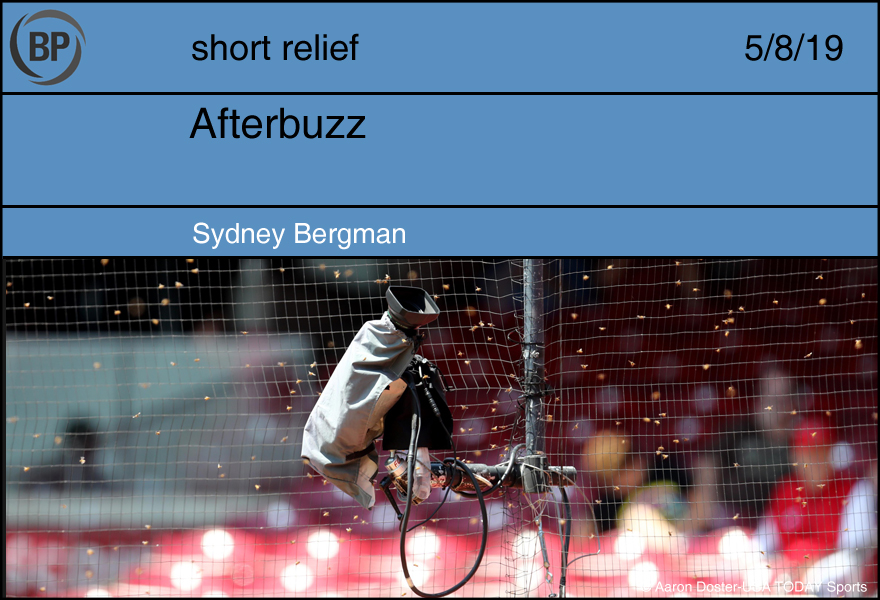 The Cincinnati Reds game was delayed by bees the other day, a swarm of them that had congregated on one of the seats. Derek Dietrich did exactly what you’re not supposed to do in that situation, pretending to spray them rather than just calling a local apiarist. If you see a bee swarm, don’t worry – bees are actually at their least aggressive when swarming: It’s a behavior that follows the hive electing to divide and for a section of it to follow a new queen (or an older queen replaced by a new one) to another location.

I’m not using the term ‘elected’ here without reason. Bees – and I’m assuming that the swarm at the Reds game were honeybees, which are eusocial; there are other bee species that do not live in hives – scout and then vote on new hive locations through a fiercely democratic process that involves a dance-off to determine the hive’s new home. Bees show position and distance through series of dance moves, and scout bees attempt to persuade their sisters to their preferred locations by convincing them to dance with them. (Worker bees are all female; you have likely never seen a male bee, which are stingerless, moderately clumsy, and have big eyes since they basically live in the dark as cultivated sperm producers.)

A fascinating thing about bee elections is that, once a location is decided, other bees dance in concert to show agreement and then seem to ‘forget’ if they had an original preference that didn’t match the hive’s decision.

The Nationals fired their pitching coach last week, a move that they did in exceedingly Nationals fashion – Mike Rizzo basically interrupted the standard post-game presser with manager Davey Martinez to say that the club had an announcement, leading to a few minutes of Nationals Twitter speculating that they were going to axe Martinez and make him do the press conference, a move that would be both incredibly inappropriate from a human perspective and incredibly appropriate from a ‘how the Nationals FO sometimes operates’ perspective. They didn’t, though, instead announcing the departure of Derek Lilliquist, rendering the totebag I have signed by him (and Martinez and Michael A. Taylor) slightly less valuable.

I don’t know if this was the right move, but it was certainly a move, and is at least doing something when the club seems to be in mid-flail, amidst injuries, a predictably bad bullpen, and endemic defensive miscues from replacement-level players (and Carter Kieboom, who is clearly not baked fully into playerdom from prospect-dom). Baseball players, like bees, need to have short memories, to be able to forget bad games, bad series, bad seasons. I don’t think that the Nationals, as players, should fall in and fall in line with whatever the FO is doing, but having a short memory about mid-season antics has surely has to be helpful with a club that has so many of them. Besides, considering all the Nats have been through, who’s to say what’s flailing and what’s dancing? 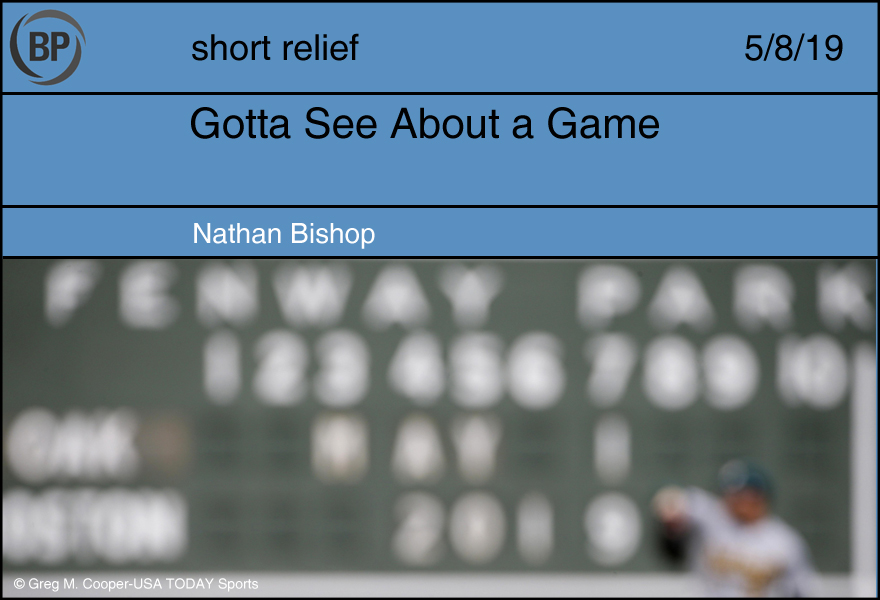 I’m going to Fenway Park on Saturday, which is a thing I’ve never done before. As a baseball fan whose formative years were filled with Ken Burns’ Baseball and Good Will Hunting, this feels like something I should have done a while ago. But not long after my formative years I became a parent, and one thing led to another. Aging is full of hard-won wisdom, and one of the pearls I’ve pulled from the manure is that Boston is, in fact, quite far away from Seattle.

Like all working Americans, and per federal mandate, I have one coworker who is a die-hard Red Sox fan. He has been to Fenway many times. His enthusiastic encouragement of my trip, with all the customary tips for seating, eating, and sightseeing, was followed by a word of caution:

“You know what dude? You’re gonna get back after all this and think ‘Fenway is fine.”

There’s a grad school term for this, and probably German word too. I didn’t go to grad school though, and I don’t speak German, so you’re getting the longform version of it here: The habitual avoidance of doing something you’ve always wanted to do out of fear it will let you down.

So I’ll cross through the entrance, and go find my seat over by the Pesky Pole. I’ll cram my 6’ 2” frame into a too-small seat, that for some reason or other faces out towards left field. I’ll crane my neck, and sweat in the east coast humidity. I will spend a week’s lunch budget on two (2) “craft” beers, none of which will be as good as the random can of beer I can pull off the grocery shelf back home, the Puget Sound, God’s own personal beer garden. 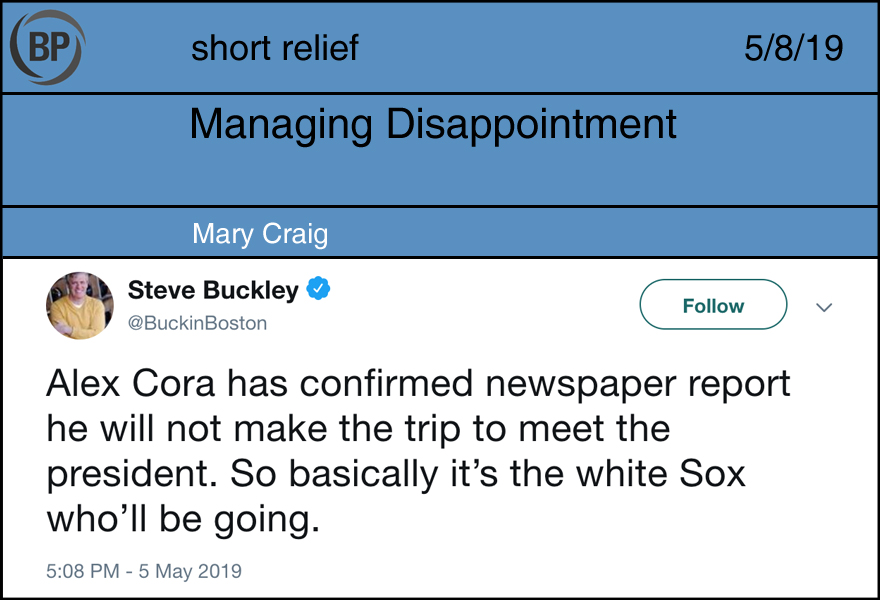 Baseball will disappoint us. That’s what it’s designed to do. Over 162 games, even the best of teams will disappoint at least a handful of times. It should be no surprise, then, that in today’s era, the greatest of triumphs is accompanied by the harshest of disappointments. The question that remains is how we deal with them.

There are some disappointments that are so routine we become numb to them. We know that on some level our lives would be improved if they ceased existing, but do they really matter? Sure, it would be nice to not have to watch Red Sox infielders botch routine ground balls or CB Bucknor change his strike zone for each batter, but if these things didn’t exist, would we even notice an improvement? Would it just be life?

Then there are the rare disappointments that sting so much more because we never see them coming. We expect better of the people involved in them because a long history of experiences has prepared us for the opposite. We never expect Jacob deGrom to give up 6 runs, and so when he finally does, it stings. It’s an instant reminder of the fallibility of human nature. Suddenly we can’t use baseball to escape the mistakes within our lives; they’re being played out in front of our own eyes and we can’t look away.

Finally, there are disappointments which are routine but which matter. A lengthy history has told us to expect them time and again, but it’s impossible to shrug them off, try as we might. They’re bigger than a botched grounder or a terrible start from an ace. They transcend the realm of professional baseball, so we can’t fold them up and place them in a tiny box in the back of our minds. Instead, we watch them happen over and over, adopting a greater sense of helplessness each time.

On Sunday, Red Sox Manager Alex Cora announced that he would not be attending the White House, joining a list of Boston’s POC players who have also declined the invitation. Absent from such a list was the name of one white player. And I felt disappointment creeping up.

You need to be logged in to comment. Login or Subscribe
Cameron eadie
I always enjoy Short Relief and how baseball and life are intertwined.
Reply to Cameron
Robert Grace
I came to say just about the same thing Cameron said. Really enjoyed these pieces and I love this feature of the site. Also, I'd be interested to see BP's take on the Nationals' front office, covered here in Sydney Bergman's essay. As a fan, I'm worried about the team and baffled by some of the high-profile decisions they've made. The narratives emerging about the way they handle negotiations and personnel decisions are not positive.
Reply to Robert