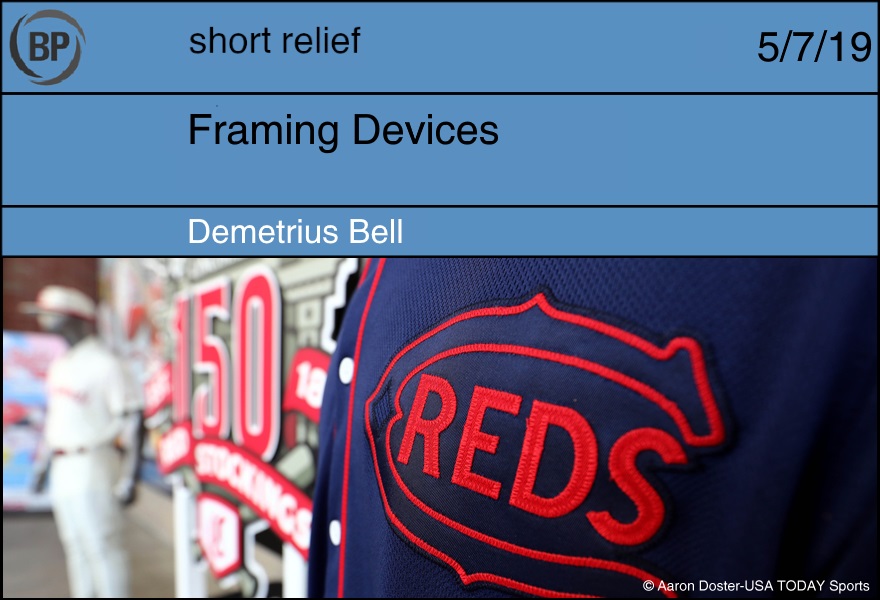 As a whole, the uniform landscape across Major League Baseball is a picturesque one. You’ll be hard-pressed to find a baseball uniform that is objectively ugly. Even though MLB uniforms are in a good state right now, it’s still always a lovely breeze of fresh air to see teams turn back the clock and wear their throwback uniforms. Even newcomers like the Diamondbacks and Rays have been around long enough to either honor their uniform history or (in Tampa Bay’s case) completely make up some history.

However, nobody in MLB is doing throwback games better than the Reds are. This is a major anniversary season for the Reds and they’re celebrating it the right way. They’re not just wearing one set of throwbacks every now and then; instead, they’re wearing 15 different throwbacks throughout the season. Instead of just going from point A to point B on their trip to the past, they’re taking the grand tour and falling into all of the destinations that they enjoyed during this particular timeline.

This includes well-known classics like the pullovers from the Big Red Machine era of the 70s, the mid-1990s uniforms that saw them don pinstripes from the cap to the pants and they also pulled out some deep cuts that only hardcore fans even knew existed. This includes the 1936 “Palm Beach” alternates, which included red pants. I want to make it known right now that I am always in favor of wearing red pants, so I can’t wait to see the Reds wear these uniforms on June 30.

We’re going to have to wait to see a lot of these uniforms, as 15 games are only a small fraction of the long regular season. That’s why it was such a treat that the Reds brought out two throwbacks on the same weekend. They wore their 1902 and 1911 uniforms against the Giants, and seeing a baseball team wear denim blue from head-to-toe is truly a sight to see. Derek Dietrich also stole the show as he decided to get in the spirit of things by donning an eye-black mustache. While there’s no filmed evidence of baseball players in the 1910s dropping the bat and admiring their homers in a sassy manner, I’d like to assume that maybe it happened once or twice back then.

That type of stuff is fun to watch, and it’ll definitely be fun to see the Reds make their way through their uniform catalog as they celebrate their 150th anniversary season. Hopefully this will incentivize other teams to try to do the same thing in the future, if only so that it will encourage some other player to put on some eye-black facial hair and have some fun with it. 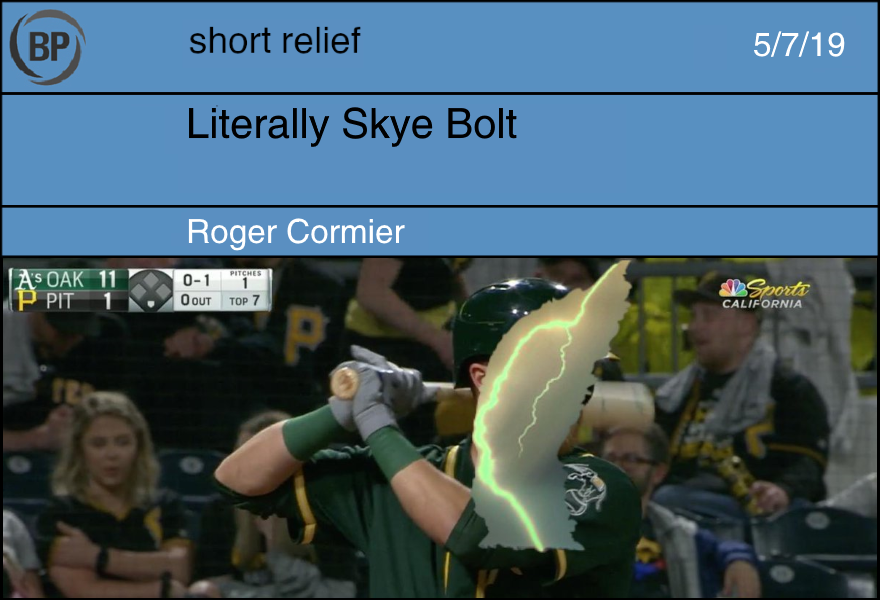 There was no way someone named Skye Bolt would live up to expectations. One would think he would at the very least crack the starting lineup during his first major league series. After all, the three games were held in Pittsburgh, where his father spent his summers, travelling often to Three Rivers Stadium with Skye’s great-grandmother watching the Pirates, driven there in her “big old Cadillac”. One would think he wouldn’t cry telling his parents about getting the call to the bigs, or that he would have human emotions, or human parents, or any family history of bothering with gas-guzzling automobiles. One would think an entity named Skye Bolt would boom in the huskiest voice you could possibly imagine times fifty of the grandest of electric car suppression conspiracies, and you would believe it.

That is not very fair. Surnames haven’t been synonymous with a person’s profession or trade in a few centuries. Assuming the Oakland Athletics’ latest call-up was a bolt of lightning that gained sentience and figured out how to exhibit itself in human form and was into baseball was kind of a stretch, the more I think about it.

I hesitated to read into Bolt’s history after he activated my imagination so. I didn’t want to confirm my biggest fear that he was a human being, thus boring (and possibly a jerk). When his mother was Miss Alabama USA she met a European model named ‘Skye’, and when his father first heard it he knew that had to be his future literal large adult son’s name. It was all a gimmick, just like everything else.

Or a cover story concocted by the United States government.

I can spend the next couple of paragraphs discussing nominative determinism, or how studies show having a “fluent” name gives you a greater chance of moving up the ladder at your law firm, or parrot the rest of the first chapter of Drunk Tank Pink, or reminisce about the scene from Forrest Gump when Forrest explains where his platoon buddies Dallas, Cleveland, and Tex are from, but instead I am going to share with you a reworking of Adele’s “Skyfall” and formally ask Paul F. Tompkins to consider singing it before Bolt’s next at-bat (or Adele, I suppose.)

Skye Bolt is a switch hitter
A Bolt righty and lefty-loosey
A Bolt that is all charged up
A.K.A. a phone at one hundred percent
What folks, is better than that?
You can’t have his number
For some reason it’s forty nine
You can’t take his name
But maybe you can have his heart