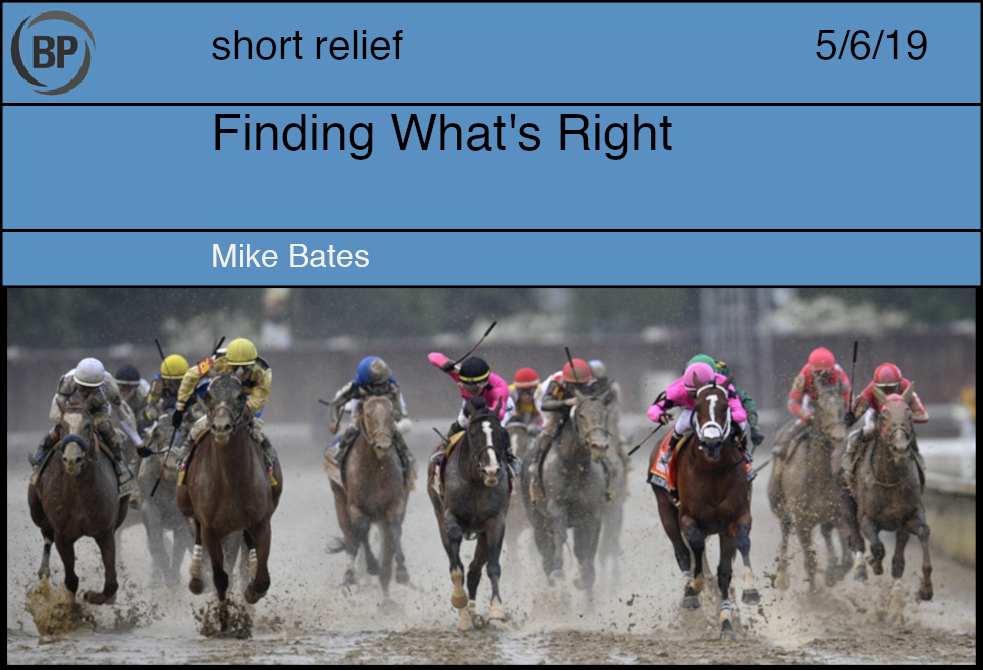 Bad calls used to be bad because we all knew they were wrong and the umpire who made them was an idiot. We could boo and yell and gesture safe in the knowledge that we were better than the boys in blue. We didn’t know what the hell was wrong with them, but we knew how righteous we were.

But this weekend’s Kentucky Derby result, in which Maximum Security was DQed for making contact with other horsies, reminds us of the new kind of bad call: the call that is bad because it is too right. It took video evidence to overturn the original finish, evidence that clearly showed Max (as I’m calling him from now on) touched the other horses. Now, I know nothing about horse racing, but I keep hearing the familiar refrain that, while the horse technically violated the rules, it didn’t actually impede anyone too significantly or violate the spirit of those rules. And that we never would have noticed its infraction anyway, except that our video replay capabilities have gotten so good.

It reminds me of how annoyed fans have gotten when a runner gets called out for being tagged when he comes off the bag for a microsecond on an aggressive slide when he beat the throw. So many fans become incensed that replay has gotten too good. That players who clearly have bases stolen or taken get screwed in a way they never have before because we’re following the rule and not the spirit of that rule.

It occurs to me that this anger is not just because we want to live in a fair and just world where the outcomes are correct. It’s because we want so badly to be Right, and for officials to be wrong. Michael Lewis’s new podcast, Against the Rules, covered this in its initial episode a few weeks ago, about how trust in officials everywhere is at an all time low. I think each of us wants to be those arbiters, and for our opinions to count.

But they so often don’t. I used to joke a lot about how horrible democracy is because we are the ones who are making the decisions. And so many of our decisions are wrong. These calls? They were right, and it’s a good thing that they are let to stand. They might not be perfect. But, on the whole, they’re a hell of a lot better and more legitimate than ours would be. 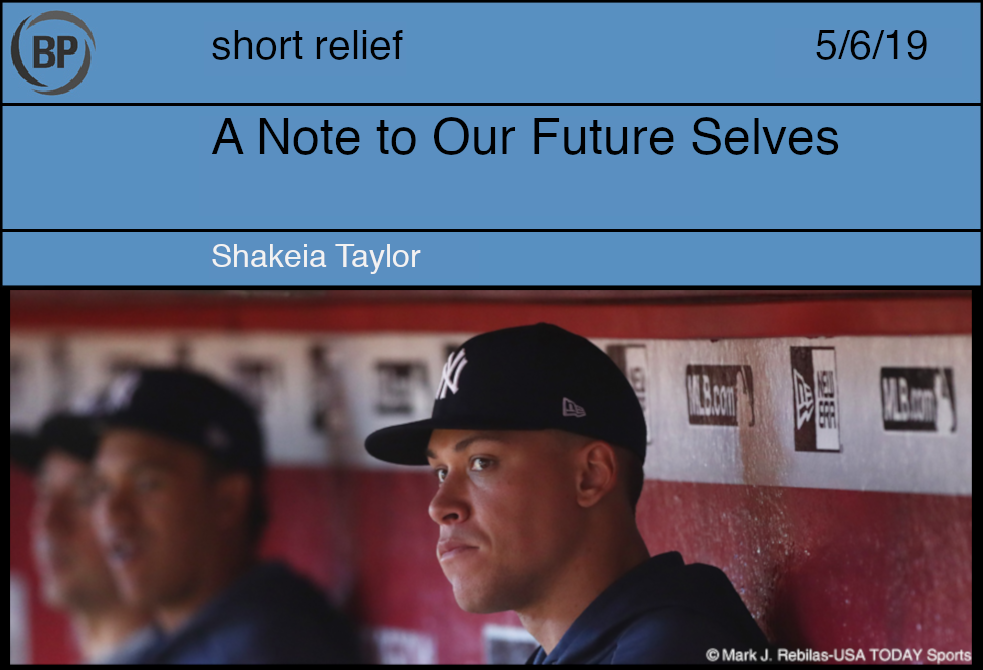 I’ve recently learned when it comes to baseball, despite my best efforts to be above it all, that I can dive into the most ridiculous level of petty. In the reminders in my iphone, I found that I’d asked Siri to remind me to talk trash about Aaron Judge on April 29, 2019. I have no idea when I did this. I have no idea *why* I did this. Aaron Judge must’ve really irritated me, enough to mark my calendar but not enough to where I’d actually document the transgression. I searched Google for anything relating to Aaron Judge from April 2018 that might have made me a madwoman and came up with nothing. While I shared the scheduled reminder on Twitter, I didn’t actually spend the day trashing Judge. I figured since I couldn’t remember whatever I was mad about, it was best to just drop it. Also, it’s a game. A game for which I get paid nothing.

Second, Aaron Judge isn’t even playing right now. He’s injured and that kinda takes the zing out of mostly harmless trash talking to no one in particular. I’d look like a real jerk kicking a man while he’s down.

I was talking about this with a friend and we somehow ended up talking about how ridiculous people act over sports. While my pettiness was funny and no one was harmed, sometimes fans take things a bit too far.

So I’d like to take this moment to just ask everyone to maybe try my way. Maybe try being just silly petty. Don’t rant for twenty tweets because a play or a game didn’t go the way you’d hoped. Don’t send weird and unhinged messages to players and their families. Just take out your phone, set a reminder for a year from the date, and then laugh at yourself when it pops up and you can’t remember why you made it. 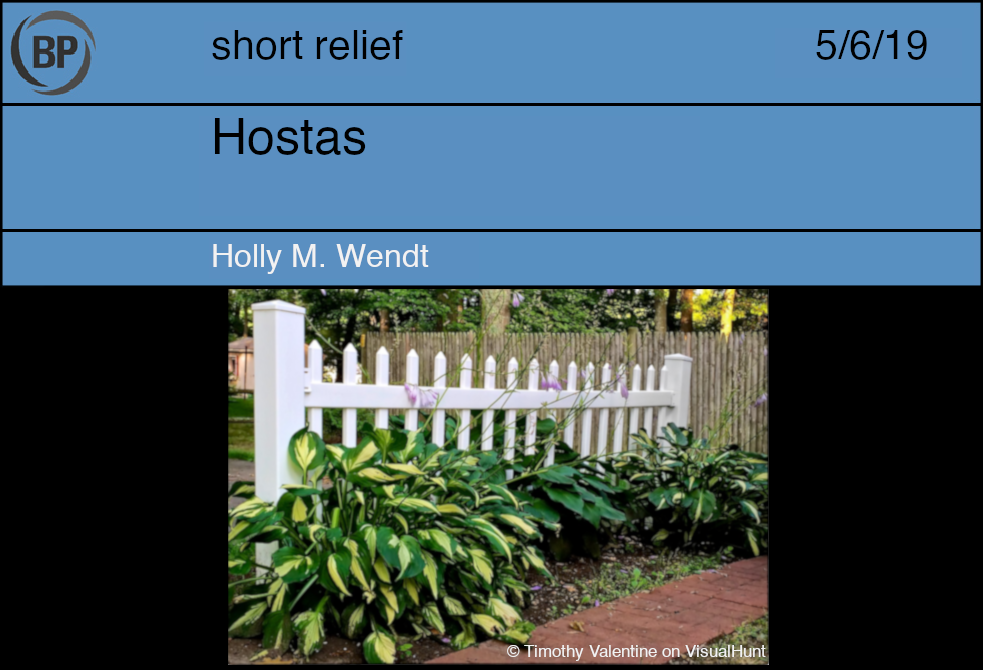 I arrived too late to the plant sale. Where earlier Saturday morning I would have seen a sea of green—a great multitude of tomato and pepper varietals, budding vinelets for everything from musk melons to cucumbers, sweet peas and green beans and runner beans and wax beans, and then the flowers and the herbs and the exciting landscaping plants like Chocolate Shogun astilbe and ostrich fern—I found long, empty tables. A few things remained, like some slightly sad pots of salvia, the hostas no one wants because everyone already has too many, the herbs too arcane for central Pennsylvania, and pre-selected trays of bee- and butterfly-friendly annuals. I came home with a bee garden set, one of those salvias because the ones planted last year thrived, and a pair of red-veined sorrel plants.

There are, of course, other plants to be had. I won’t go tomato-less because I botched the timing on the Master Gardeners’ event. If I were a better gardener, too, all of these plants would have been started indoors ages ago; I wouldn’t be so anxious about only having “boring” types of tomato and basil if I got a seed catalogue and picked the colorful and exciting choices I hoped to have. I’m working within the parameters I have, but I’ve set those parameters myself.

On Saturday night, the Phillies and the Nationals seemingly challenged each other to a game of bullpen chicken: whose bullpen could collapse in grandest fashion while their team still earned the win? Based on certain kinds of evidence—the recent firing of Derek Lilliquist, the Washington injury list, and the stories past performances have told—the Nationals seemed marginally more likely to lose the endeavor. However, anyone paying attention to the late innings in Philadelphia knows that any bullpen event is one rife with uncertainty. When the Phillies, in the seventh, gave up two runs on a bunt, thanks to Juan Nicasio’s throwing error and two preceding infield hits, after squandering several prime offensive opportunities in earlier innings, it seemed apparent that they’d gone too far, too fast. Then, after a single and a walk to open the inning, the Phillies’ batters put up four doubles in five batters, all hung on hapless Joe Ross. One set of fans in red and white dared to have hope, perhaps even confidence, in a successful outcome. But in the eighth, after Pat Neshek gave up two singles, Adam Morgan, somewhat uncharacteristically, gave up back-to-back home runs, negating the efficacy of the Phillies’ five-run seventh. The Phillies’ bullpen offered up another run in the ninth, and their bats could not answer.

Craig Kimbrel, like that last pot of salvia, like the lemon thyme and the ornamental lavender and the whole table full of hostas, is still waiting. I do not think Craig Kimbrel is a pot of pale-hearted hostas, bland and common in what would be his age-31 season, but even if he is, I can think of several teams who could really use even a little competent coverage in the brief, bright light of the late innings.