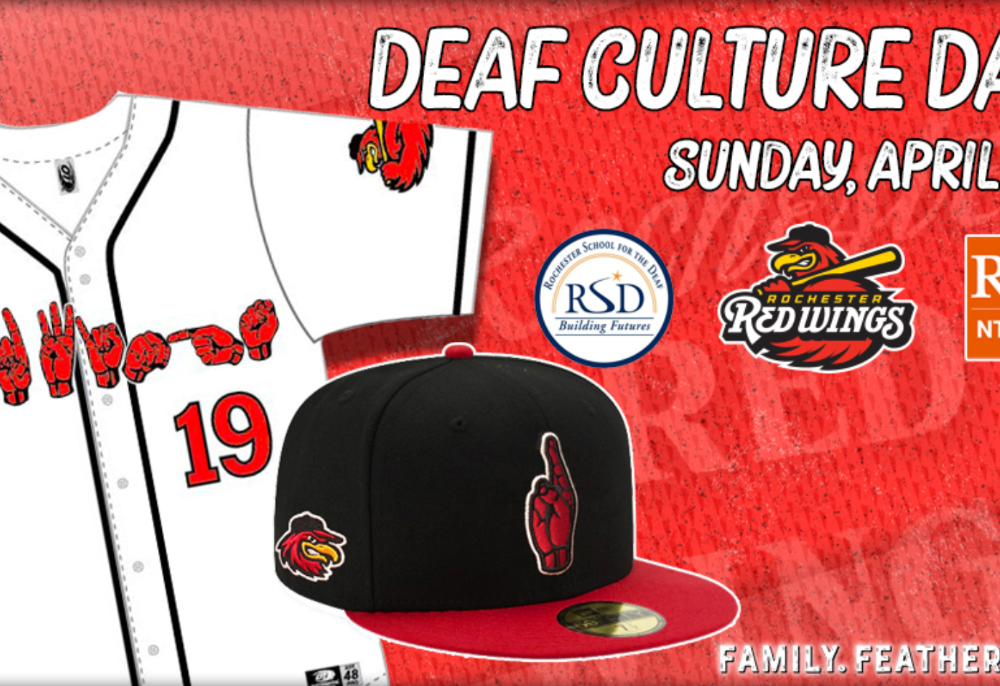 There’s so much about baseball that revolves around listening. When a scout talks about a player who is something special at the plate they’ll say his swing produces “that sound.” Rarely you’ll get a pitcher that spins the ball so well you can hear it. When the season starts up each year, everyone uses the “crack of the bat” trope. Before streaming video and television the game was evangelized on radio and over the loudspeaker. Hell, a current, successful broadcast TV show (Brockmire) is built on a character whose ability to call a baseball game, to tell stories, is the only functional part of his life. It’s a communal game where lively chatter is commonplace, on the field and off. The most electric moments I’ve had at a baseball game have been due in large part to a crackle within the crowd building slowly at first before crescendoing to a full-throated roar. It is the action on the field, of course, but it is also the audible reaction of the crowd.

The experience is, I imagine, at least a little different for the community of Deaf baseball fans. While there are likely substitutes for many of these interactions, I do imagine the importance placed on them within that community is different. I say “I imagine” in these instances because I am not deaf. I cannot put myself in the shoes of those who inhabit the community and the closest connection I have is a family member who uses hearing aids due to hearing loss, and while there is an impact, it is not the same thing. I reached out to author Sara Nović who explained:

“While deafness can certainly be difficult in the way the hearing world builds unnecessary barriers against it, it’s not inherently disabling; there’s no daily life task we can’t do because of it. Culturally we think of ourselves as a group with a unique language and history, just like many other minority groups. So while I imagine there is some aural pleasure to be had at a baseball game, expecting a Deaf person to miss the sound of a bat cracking or whatever is like expecting a French kid to miss or mourn the fact that he doesn’t speak English. It doesn’t factor in that way.”

It makes sense, of course. For the hearing world, it can be hard to step outside of the mindset that when someone has a different experience than we do, they are missing out. I did it in the introduction of this article. But rather than remove that paragraph, I am leaving it as a point of emphasis to myself, and hopefully others, how easy it is to make these assumptions and how difficult it is to understand that the aural aspects that I relish about baseball as a member of the the hearing world aren’t, as Nović states, a loss for the d/Deaf community.

The Rochester Red Wings are, for a game, celebrating the history and culture that is represented by the city’s Deaf community: 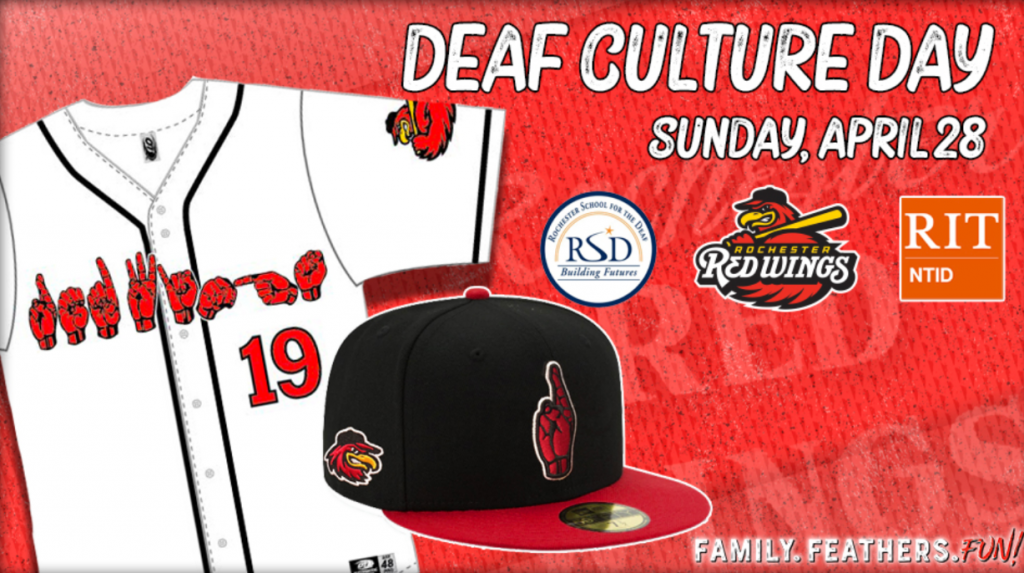 They have teamed with Rochester Institute of Technology’s National Technical Institute for the Deaf (RIT/NITD) and the Rochester School for the Deaf (RSD) for the event, which will include interpreters dispersed throughout the park, “including in the seating bowl, at concession stands and at the ticket offices to assist deaf individuals,” as well as an inning with no PA announcements or music. The videoboard at the park will have captions during parts of the game, along with the jerseys spelling out “Redwings” in the manual alphabet and the hats using the manual alphabet letter for “R” on it. The game will also feature highlights of d/Deaf individuals who have made an impact on society, all in an effort to educate attendees about d/Deaf culture.

Baseball doesn’t have an expansive history with Deaf ballplayers, and hasn’t had a deaf player since Curtis Pride last appeared for the Angels in 2006 (partially deaf players such as Michael Cuddyer have played since). The only matchup between a Deaf batter and Deaf pitcher occurred in 1902, per Nović when Giants pitcher Luther Haden Taylor faced down Reds’ batter William Ellsworth Hoy. Nović further notes that “we haven’t seen a culturally Deaf, ASL-using player on the major league field since Hoy, age 99, threw out the first pitch at Game 6 of the 1961 World Series.” Even Pride’s relative recency belies the lack of deaf players through modern history, as he was the first deaf player in the major leagues since Dick Sipek appeared in 82 games in 1945. There is some hope on the horizon, though, as Cason Sherrod, a 22-year-old reliever in the Marlins system was drafted in the seventh round last year, and might be the next best chance of seeing a deaf player reach the majors.

So what I appreciate, now, about this event is the emphasis on Deaf Culture, which is different than simply integrating d/Deaf people by making them more like hearing people. Again, borrowing from Nović:

“People often think progress means life is automatically better for d/Deaf and disabled people. And in some sense, it’s true—I mean no one’s walking around calling me “Dummy.” But with progress, especially in technological developments, comes a change in cultural attitudes—if the deaf person can be “fixed” it follows that they should be, and it’s no longer the majority’s responsibility to make an effort to communicate in a way that’s mutually accessible. It’s difficult to imagine my coworkers changing their everyday habits to make things easier for me, or taking time out to learn ASL. Our education system glorifies “mainstreaming” as integration, but in reality, the goals set for deaf children are more about blending in, endlessly practicing to speak and listen when that energy might be put toward other skills.”

While the captions on the videoboard won’t capture the whole game and the silent inning is only an inning, with the help of RIT/NITD and RSD, the game will address the Deaf community — a significant one in Rochester — more on their terms than any other game they’re likely to attend and in a way the celebrates them rather than treats them as a group that needs to be gifted a special game.

And that’s something that baseball could use more of, in general. An approach that understands that what makes the game great for many cannot always be accessed by a few, and that there are things to celebrate on the terms of the few, anyway. We generally do not attend baseball games to hear the PA or the music between innings and batters — to have a chance, even for one inning to appreciate the experience others have while not losing something of consequence seems like an easy win for Rochester, and is something that could be replicated across all levels of affiliated baseball.

Inclusion of any marginalized community need not be any different or more complex than when teams run alumni nights of neighboring colleges and universities. The Washington Nationals, like all teams, run any number of event days, including alumni events for American University, University of Virginia, Pac-12 (???), University of Maryland, Washington Catholic Athletic Conference, Big 10, College of William & Mary, VCU, Old Dominion, Radford, Virginia Tech, James Madison, George Washington, Georgetown, and George Mason. Missing from that list is the local Gallaudet University,* where Curtis Pride — who debuted with the Montreal Expos — is the baseball coach. This isn’t meant to shame the team, which does offer a Night OUT promotion among other events. Rather, consider it a suggestion for additional inclusions with a local connection. Surely other cities have similar communities as Rochester, who would love to be considered and celebrated.

Nović relayed that for her, baseball was the most d/Deaf friendly sport because the “clear scoreboard, built-in hand signals, and…slow pacing are really conducive to a Deaf/ASL outing with a lot of conversation time.” It is great that the sport has features that the Deaf community can appreciate as it is, but that doesn’t mean the organizational body can’t do a little more to recognize and commemorate them, as they do so many other communities throughout the year. Rochester’s initiative in doing so makes it the best thing in baseball this week.

*Update: the Nationals do have an event for the Deaf community, as noted below

The Nats had their deaf day last week! It wasn’t advertised as the Gallaudet day but there were ads on campus and I got this photo too. Friend who went said they showed a video of Abe touring the campus with Bison. Lincoln signed the Gallaudet charter BTW. pic.twitter.com/pYGgMU6kbe