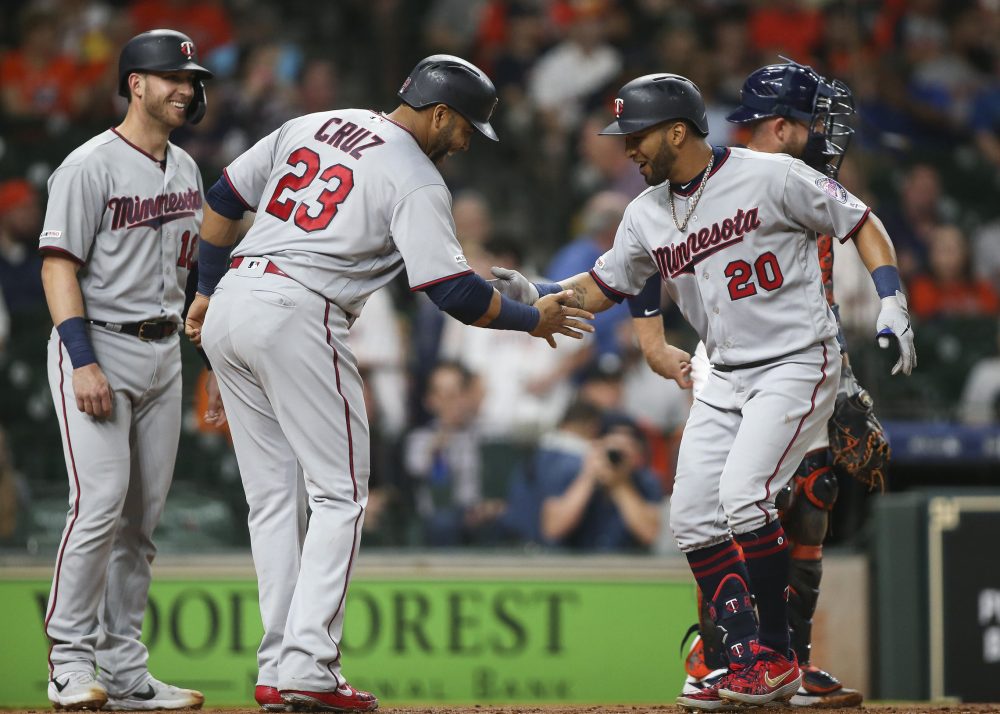 Minnesota’s power numbers making a huge jump isn’t a surprise — they added Nelson Cruz (37 homers in 2018), Jonathan Schoop (32 in 2017), C.J. Cron (30 in 2018), and Marwin Gonzalez (23 in 2017) this offseason and they’ve already played the Orioles six times — but what stands out about the Twins unexpectedly leading all of baseball in slugging percentage, isolated power, and extra-base hits per game so far this season is that they also have MLB’s third-lowest team strikeout rate.

Following the departures of the ultra patient Joe Mauer and his dollar-store doppelganger Robbie Grossman, the Twins have rapidly transformed into an attacking, aggressive, homer-hunting lineup. At a time when strikeouts have skyrocketed across baseball, the Twins are striking out less often than they have since 2012. Most teams looking to avoid strikeouts do so by acquiring high-contact hitters, but that’s not the case with the Twins — their current per-swing contact rate is the lowest in team history.

Instead, the Twins built a lineup full of power hitters who swing early and often, ending many plate appearances before they even get to two strikes. There’s a fine line between “free-swinger” and “undisciplined,” of course, and in attempting to trade on-base skills for slugging without the usual increase in strikeouts the Twins will be walking it all year. Compared to last season, they’ve jumped from no. 28 to no. 4 in percentage of total pitches swung at, including rising from no. 28 to no. 6 in first-pitch swing rate. 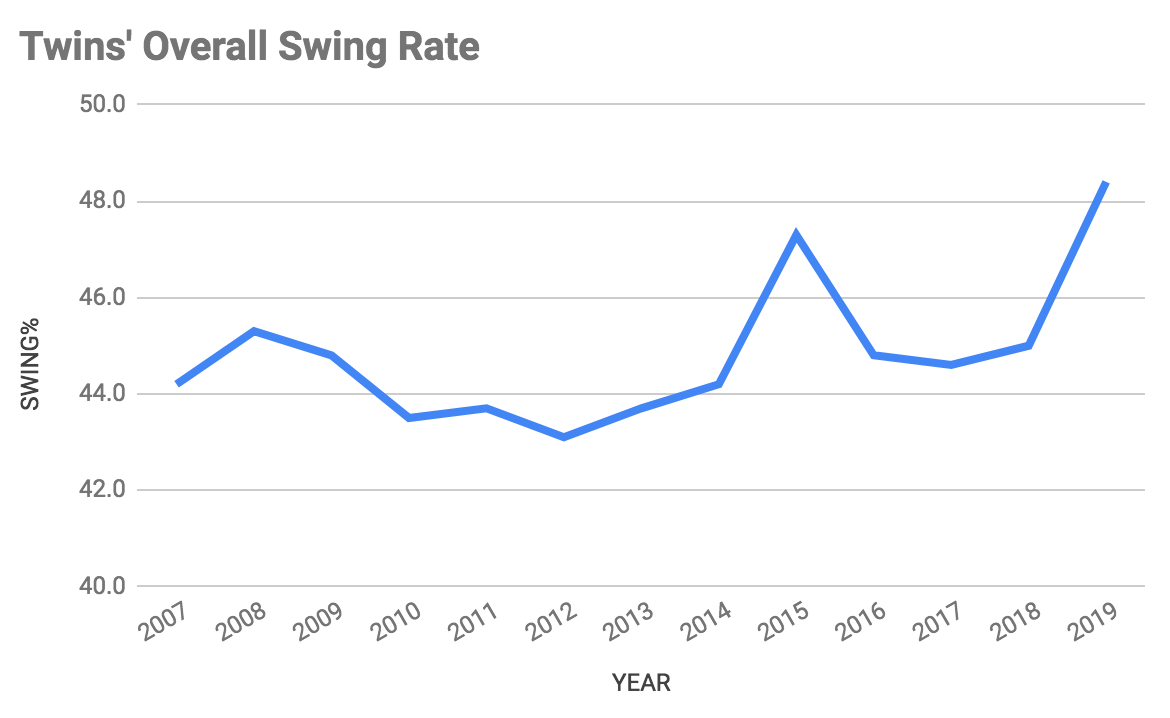 Their overall swing rate of 48.4 percent is by far their highest since such data became available in 2007, and within that they’re swinging at more pitches inside (good!) and outside (bad!) of the strike zone. Let’s look at the bad part first. In theory, an ideal approach would involve swinging at close to zero pitches outside of the strike zone. Minnesota’s swing rate on out-of-zone pitches — also known as “not strikes” — has risen from no. 26 last year to no. 4 this year, and at 32.9 percent is their highest rate since at least 2007. 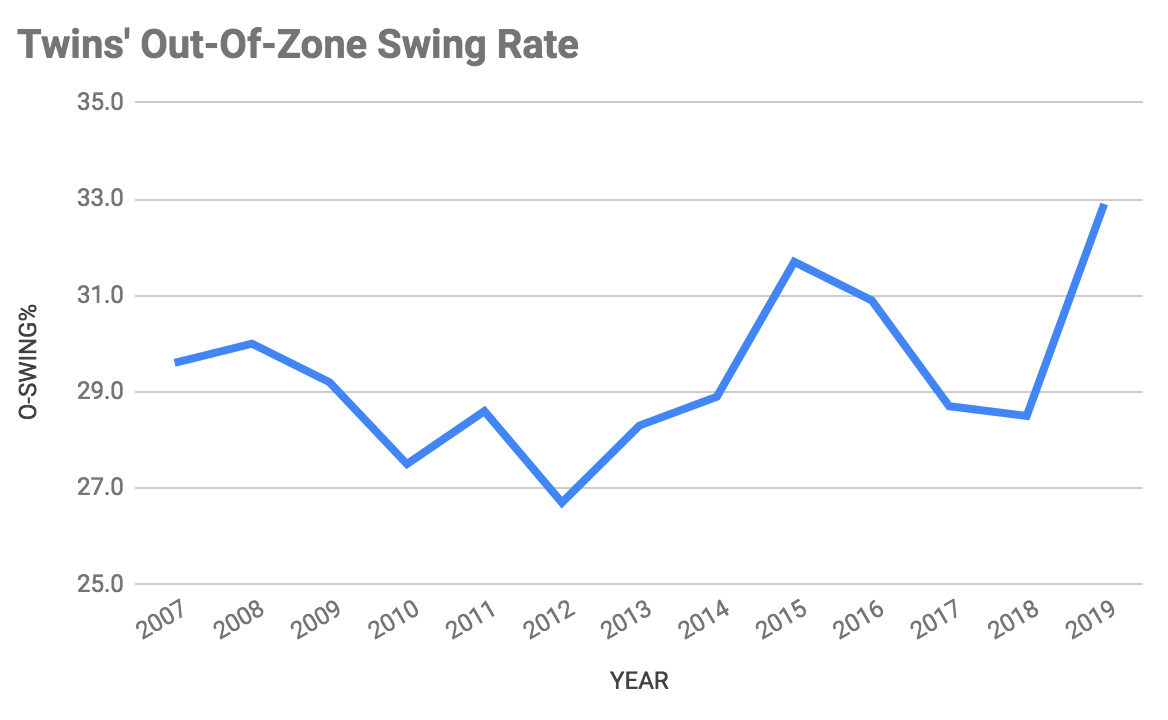 Now the good part. If the collective goal as a lineup is more power and fewer strikeouts, at a time when deep counts lead to more whiffs than ever before, the smart approach is probably to maximize big, bad-intentioned swings on pitches inside of the strike zone. Their swing rate on in-zone pitches — also known as “strikes” — has climbed from no. 29 last season to no. 2 this season. When a pitcher throws the Twins a strike they’ve hacked at it 67.1 percent of the time, by far their highest rate since at least 2007. 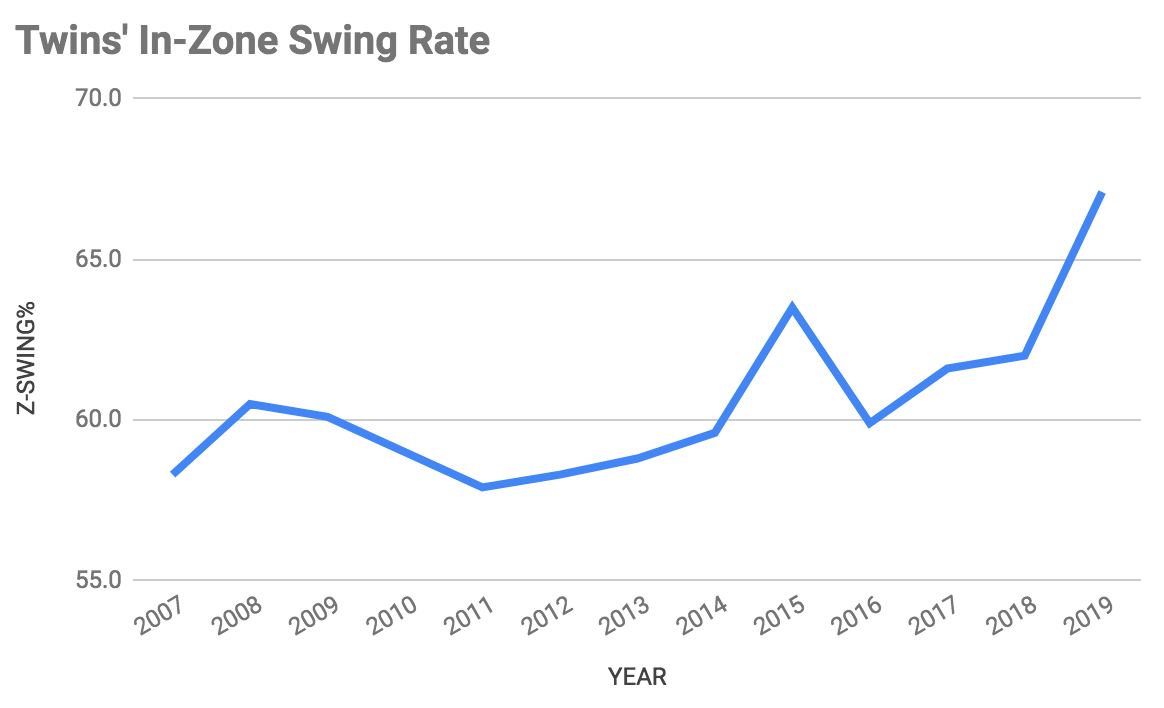 While becoming far more aggressive, especially early in counts, the Twins’ lineup has improved from no. 18 to no. 1 in isolated power and from no. 10 to no. 3 in strikeout rate. However, they’ve also declined from no. 14 to no. 23 in walk rate. Opponents are aware of their approach and have thrown them fewer strikes, to avoid being ambushed and to coax free-swingers into the undisciplined end of the spectrum. Minnesota has seen the second-fewest in-zone pitches this season, compared to the fourth-most last season. 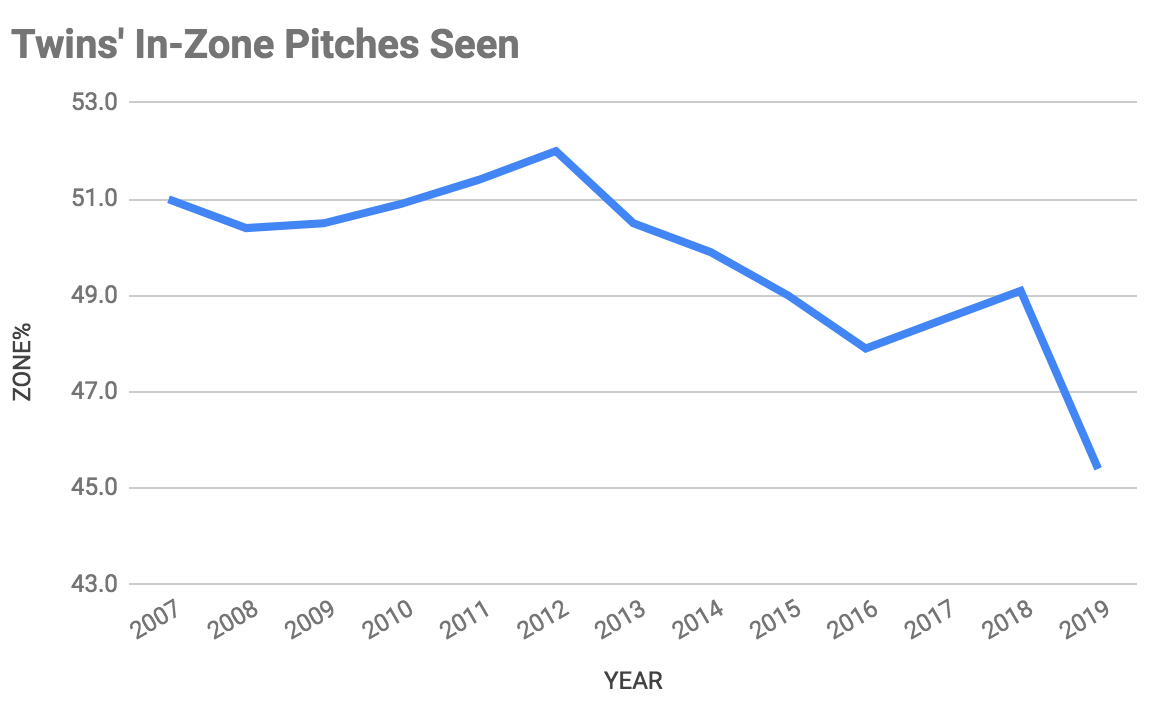 Minnesota’s power will come back to earth, if only because they’re done teeing off on the Orioles, and once that happens grinding out some walks would be nice. Miguel Sano‘s return should help — for all of his strikeout issues, he’s drawn 76 walks per 150 games and drags pitchers into the deep waters of 3-1 and 3-2 counts — but the plan’s success is riding on hackers Schoop, Cron, Eddie Rosario, and Byron Buxton being semi-disciplined (and super-hacker Willians Astudillo remaining a strikeout-resistant unicorn).

It’s a risk, but it’s one the Twins took consciously after assessing the hitters available this offseason as well as MLB’s extreme homer-or-strikeout state. So far it’s worked, as they’ve scored the AL’s third-most runs per game and boast the league’s best record, all without Sano. And a month of watching the Twins’ baseball-crushing, whiff-avoiding lineup got me wondering about the history of such offenses. How often is an elite power-hitting lineup also among the best at avoiding strikeouts? And what becomes of those teams?

Let’s use isolated power — slugging percentage minus batting average — since it excludes singles while including doubles and triples. We’ll focus on rank within a season, since year-to-year environments vary. (In the past 50 seasons, only five teams — 1997 Mariners, 2003 Red Sox, 2005 Rangers, 2010 Blue Jays, 2018 Yankees — topped a .200 isolated power, yet this year’s MLB average is .176 and the Twins lead at .237.) OK, ready? Only one team in the past 50 seasons had MLB’s highest isolated power and lowest strikeout rate.

Houston topped MLB in batting average, on-base percentage, and slugging percentage, with George Springer (34), Jose Altuve (24), and Carlos Correa (24) leading 11 total hitters with double-digit homers. They scored 143 runs more than the average MLB team and struck out 250 fewer times than the average team. That season 140 different hitters struck out at least 100 times across baseball and only two were Astros, with Springer’s team-high 111 strikeouts ranking tied for 108th in MLB.

Altuve epitomized their approach, winning MVP by hitting .346/.410/.547 with 24 homers, 67 total extra-base hits, and just 84 strikeouts. Of their 11 hitters with at least 250 plate appearances, all but two (Carlos Beltran, Jake Marisnick) posted a better-than-average isolated power and strikeout rate. The lineup was a modern marvel, combining power and contact skills in a way we’ve never seen, and their 123 OPS+ is the highest of any team since 1970. Oh, and they won the World Series, too.

There are all sorts of Twins connections here. Minnesotans know all too well how scary those mid-90s Indians lineups were. Paul Molitor, who was let go as Twins manager in October, starred for the 1982 Brewers. David Ortiz starred for the 2003 Red Sox after being cut loose by the Twins that offseason. And the 2009 Yankees began their run to the World Series by sweeping the Twins in the ALDS.

In addition to the six teams covered above, six other teams since 1970 had a top-three isolated power and a top-three (lowest) strikeout rate.

There’s that mid-90s Indians juggernaut again — the only lineup since 1970 to finish top three in both categories in back-to-back seasons. Toronto was also a juggernaut in 1992-1993, winning back-to-back World Series, but the 1992 version struck out too much to make the cut. The 1993 version added Molitor, who hit .332 with 64 extra-base hits and 71 strikeouts, and they cut their team strikeout rate from no. 18 to no. 3. Nelson Cruz, now the Twins’ designated hitter, totaled 29 homers for the 2011 Rangers.

In all, 12 teams during the past 50 seasons have ranked among MLB’s top three in isolated power and in (lowest) strikeout rate. Those teams averaged 95 wins (adjusting for strike-shortened years). Seven of the 12 led the majors in runs scored and all but one had a top-four run total. Nine of the 12 either made the playoffs or would have if not for a strike canceling the postseason. Of the 11 teams from years in which a postseason was played, six advanced to the World Series and three won the World Series.

Thanks to the indispensable Rob McQuown for research help.

You need to be logged in to comment. Login or Subscribe
Bruce Rothstein
Although his impact has been somewhat limited by spotty playing time, Willians Astudillo has been leading the band for the combination of high Z Swing, High O-Swing and high contact whenever he has been in the lineup. Right at the top of the leaderboard in all of those categories for 50+ plate appearances.
Reply to Bruce