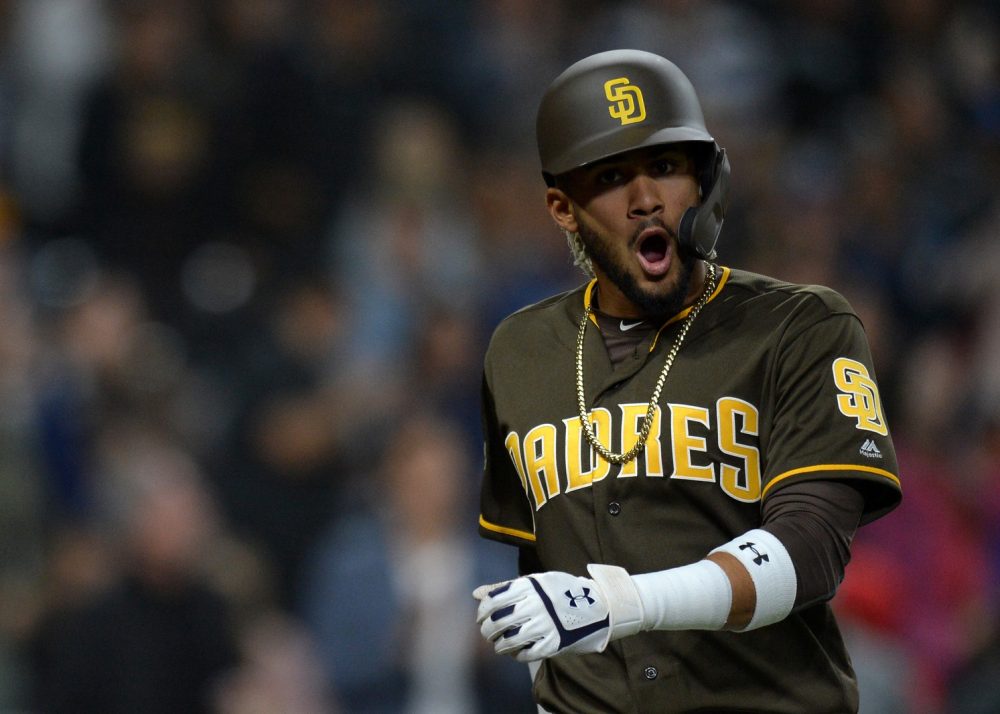 As with last year, the premise of this article is explained entirely in its title.

I know, I know; Sanchez isn’t the best player in this draft, and Arizona just drafted Hunter Greene last year. But not everyone is sold on Greene’s ability as a leader. Sanchez is undersized but dynamic, and he’s absolutely electric with the ball in his hands. Look for the Diamondbacks to trade Greene to recoup some value and to rebuild around the higher risk, higher reward Sanchez instead.

With outstanding bloodlines and a rare combination of power and speed, Tatis Jr. is the easy pick for a Giants team that just needs talent. Tatis comes from a baseball family and has an argument for top overall prospect and fits a need here, so San Francisco shouldn’t overthink it. His historical association with James Shields is a little troubling, but at the end of the day the talent has to win out.

Few players in this class had a more eye-opening 2018 season than Franco, who’s earning some comparisons to Von Miller. New York badly needs to add some speed to its roster, so Franco is the pick here over the consensus best prospect, Vladimir Guerrero Jr.

How lucky can one team get? Many consider the beefy Guerrero to be the best prospect in this class, and Oakland lands him at no. 4 thanks to some classic over-drafting by teams ahead. Guerrero has power for days and can be a star attraction for this franchise in their soon-to-be-new home.

Tampa Bay has to get faster, and they have to improve defensively. Enter Lewis, who excels both coming downhill and around the bend. Honest disclaimer; they’ll probably draft someone worse.

Does New York love or hate Whitley? We’ve heard plenty of rumors that the latter is true, but that smells like a smokescreen; can they really go with Jason Vargas for another year? Whitley may need some extra time to develop but he’s got a big arm and impressed last season.

With Sergio Romo acquired as a veteran stopgap arm this offseason, the Baby Cakes can instead focus on the best player available. That’s Adell, who lit up the combine and who has perennial Pro Bowler potential.

Yes yes, this is way too early for the position. But Bart is the rare two-way prospect who can catch and block, and some scouts liken him to a poor man’s Travis d’Arnaud. He fits what they’re trying to build in Detroit.

This may not be the world’s most exciting pick, but Jimenez can make life easier for Marcus Stroman, and that’s got to be Toronto’s top priority. Look for the powerful and sturdy Jimenez to become a fan favorite up north.

Is Keller the best arm left in this draft? Not in the eyes of most. But Colorado has been linked to him from the start, and he fits what general manager Jeff Bridich looks for in a first-rounder. Hopefully the arm strength wins out.

There are some who think that Cease is too stiff to be a franchise hurler, but he’s got a huge arm. Cincinnati is tired of seeing its ceiling capped by the likes of Anthony DeSclafani, and swings for the fences here.

Two catchers in the same first round? It’s a rarity, but it makes sense. Ruiz’s defense isn’t quite what Bart’s is, but he’s even more of a threat offensively. A make-up present for Jhoulys Chacin?

Miami just needs to take the best player available, because have you seen that roster? Dear god.

Atlanta has missed badly on some speed rushers in recent seasons. Trammell can help buck that trend. Watch the tape; there’s more power here than many think.

Look, lots of people are going to disagree with this pick. But if you think you’ve identified the guy you’ve got to go get him. Washington does so with Dunning, who compares favorably to Paul Byrd.

He has all the talent in the world, but Lucas Giolito just can’t stay healthy. The massive Riley can help fix that by providing support, and can also help clear some lanes for Chicago’s run game. He’s a force when underway.

The Mets addressed their biggest need at six. Here, they grab a jack-of-all trades weapon who was made for today’s game. Injury history may scare some off of Senzel, but he’s a dynamic talent when on the field. That’s something New York lacks after failing to retain Wilmer Flores.

C’mon, take one look at Vogelbach and tell me he doesn’t belong in Minnesota? He might not have a ton of versatility, but Vogelbach provides power, durability, and an ability to play right now. They have to make life easier for Michael Pineda, who’s looking like a bust.

Safe. Productive. Ready to play now. Tucker fits in well with what they’re trying to build in St. Louis for many, many reasons.

Will Pittsburgh learn from its past mistakes and avoid drafting an uber-talented, uber-risky speedster? LOL, of course they will not.

After trading away some talent, look for Seattle to try to rebuild on the fly with Kieboom. He’s not a direct replacement for Frank Clark, but the organization is in more of a “best player available” mode, and this pick could be a real homerun (baseball metaphor).

Not everyone is going to agree with Baltimore’s decision to build around Trey Mancini, but it’s too late to shift gears now. Bichette is an up-the-middle thumper who can set the tone with the ball in his hands.

Arguably the last really good exterior defender remaining, Gorman fills a massive need in Houston. He’s not without some risk, but few can match Gorman’s power and hand usage. His age is also a plus.

Oakland landed the best player in the draft at four. Here, they reach to fill a need in Verdugo, a player who’ll help them tremendously defensively in the secondary but who has questionable football character and a moderate ceiling. The perfect Raider, honestly.

Philadelphia has a loaded roster, and that allows them to get creative here. Kopech might not contribute much in 2019, but if he were healthy he may have been a top-10 pick. Philly can redshirt him for a year and essentially gain an “extra” first-rounder in 2020. Real Moneyball type stuff.

How does this happen every year? A top prospect falls during the draft process for pretty much no reason, and then a smart team scoops him up. This year it’s Kirilloff, who’ll be a 10-year starter if Joe Maddon doesn’t drive him out of town first.

Too soon? Too soon.

It was far too easy to run all over Los Angeles last season. Murphy can help fix that, even if he’s a bit of a one-trick pony/schematic fit.

Acquired from the Royals in a recent trade, this pick should be used to address Seattle’s giant hole in center field. Enter Thompson, who can occupy the “center field” role and who’s got enough pop to hurt you coming downhill, too.

They got Chacin a weapon at pick 12. Here, they help protect him with one of the #thiccest and most powerful talents in the draft. O’Neill is a plug-and-play mauler who makes up in raw strength what he lacks in finesse.

L.A. was great last season, but we all saw what happened in the playoffs. Adding a talent like Puk can really help them close out games.