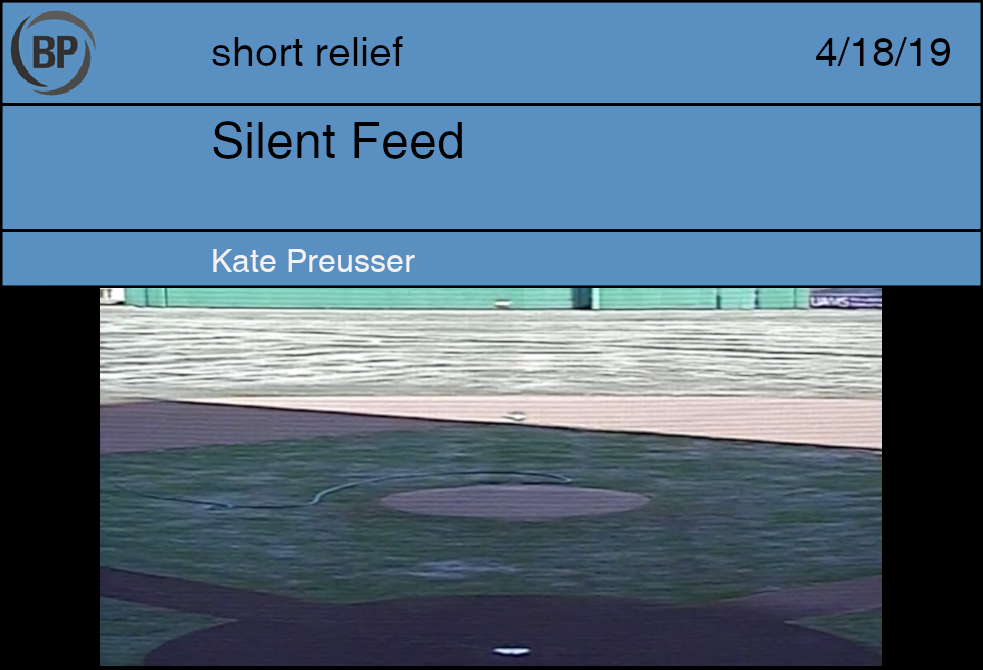 Despite pouring money into improving the product in the off-season, MiLB.tv remains charmingly low-rent, which is exactly how I like it. Give me broadcaster chatter and Power Point slide art and wonky camera angles any day over slickly produced MLB.tv content or that godawful Imagine Dragons song being shouted at me every half-inning through a pair of disembodied arctic-blue lips. The Mariners’ West Virginia affiliate regularly runs a commercial featuring a woman with a Southern accent saying “try our nay-ked chicken burr-gahs” and I would die for her. (Also their entirely unironic tagline: “you can’t beat our meat.”)

There’s also a refreshing lack of canned chatter on pre-game shows in the minors. Occasionally a top-performing prospect will record a brief interview with the broadcaster, although this isn’t always broadcast on the TV feed. Often times, there’s a gap between the TV feed clicking on and the broadcast starting up, a quiet, meditative time I’ve come to treasure.

For some reason, the Mariners’ Arkansas affiliate has one of the longest TV-to-talk delays. The TV feed kicks on almost a full hour before gametime, showing the field being manicured and watered, interspersed with stock footage of fans coming into the park or waiting in line at concession stands. 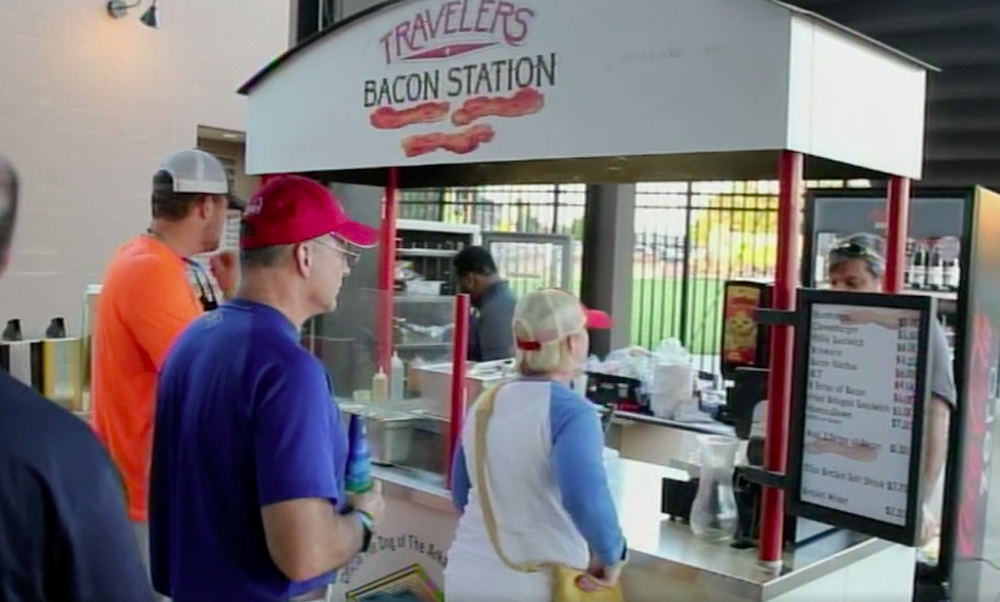 (I want to go to the Bacon Station!)

I turn the feed on early now, just to have it in the background, intending to do other things while I wait for the game to start, but instead find myself hypnotized by the footage on loop.

I’ve never exactly figured out what ASMR is, but from reading the descriptions of it, it seems akin to what I experience watching the footage unspool of an empty field, the endless looping turnstile, neon signs flashing on and off, on and off. The grass is watered, and watered again.

And then, at the end of the game, the feed stays on over the silent park, the signs in the distance blinking out, the landscape blackening like outer space, and the ballpark a tiny floodlit spaceship in its midst. 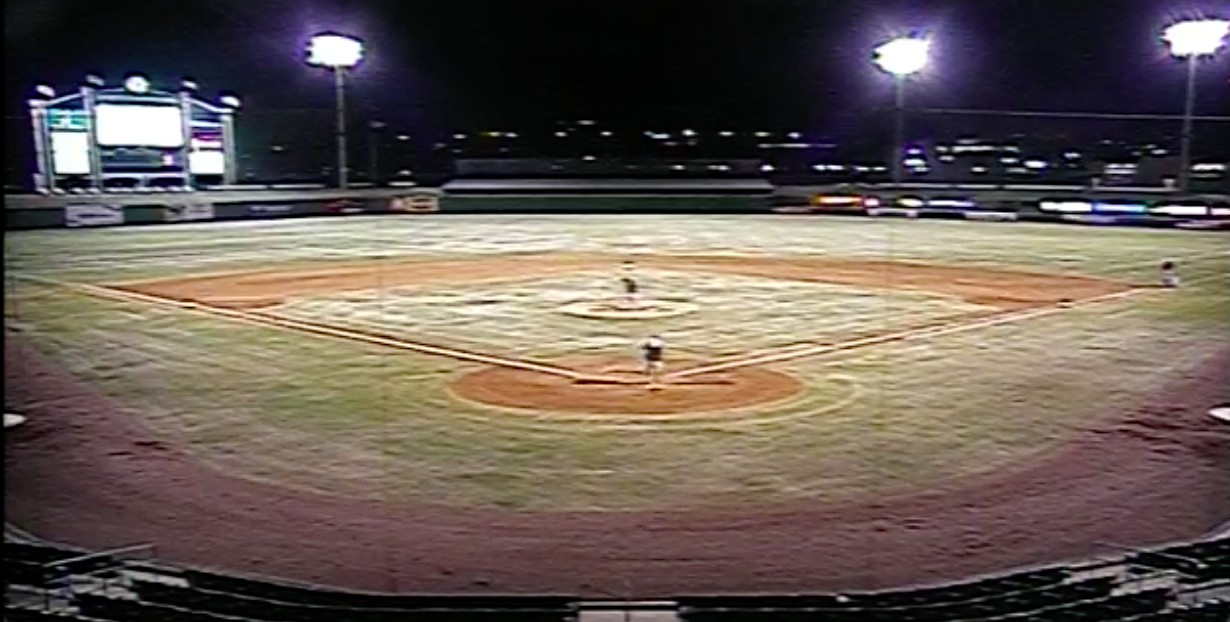 Baseball season, for anyone involved with the sport, is endlessly noisy. There are countless articles to read, Twitter arguments to endure, games to watch, podcasts to hear. And then the next day, there’s more. It encourages me to honor this space of silence, the quiet breath before and after, where the field seems like it stretches to the ends of the earth, and anything feels possible. 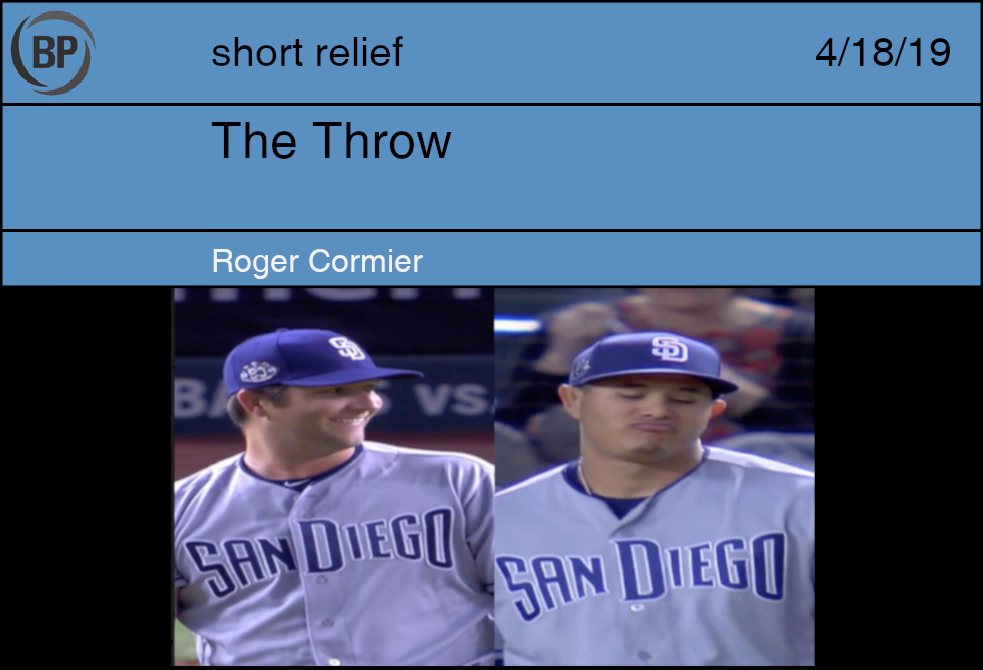 I have a theory. It is probably wrong, and impossible to prove, so it is definitely the best kind of theory: Ken Griffey Jr. is revered by a higher percentage of sports fans who grew up in the east coast than the ones who were reared out west. Griffey Jr.’s prime was with the Seattle Mariners, who tended to play into the early morning in the Eastern and Central time zones, and since this was before MLB.TV and when the internet really began to hum and consume our lives, that meant the east coasters would mostly see the home runs and great catches from Junior on Sportscenter, and not all of the times he made an out (more often than not, like all baseball players) or an error (it happened, I checked). That’s how a legend grows.

There are no secrets anymore, so I might as well inform you that the Padres are the cool late night team to watch now. They used to just be weird: McDonald’s “founder” Ray Kroc saved the team from moving to Washington D.C. in 1974, then in their home opener yelled into the public address microphone that his team’s play was “stupid”, almost causing a team boycott. Their mascot was a chicken, and it was not even exclusive to the team. They had Tony Gwynn, yet won only one game in two World Series appearances. It took 7,444 games for a Padre to hit for the cycle. They still haven’t thrown a no-hitter. They were once no-hit in a game where they had 10 baserunners.

They are still weird, but in a fun way. They actually agreed to pay a dude $30 million a year. They let a prospect start the season in the big leagues without locking him up to a team-friendly extension first. Their rookie pitcher thinks he is a cowboy, and I have yet to see proof he ain’t one. Their other rookie starting hurler jumped from A-ball to the bigs, and his last name is Margevicius. Their bullpen is puntastic: Stock; Wisler; Wieck; Yates; Wingenter (the latter somehow has yet to get a win.) Another reliever has “hunted for alligators”; that’s it, there is currently no further information to be found about this hobby, or whether he has found one. 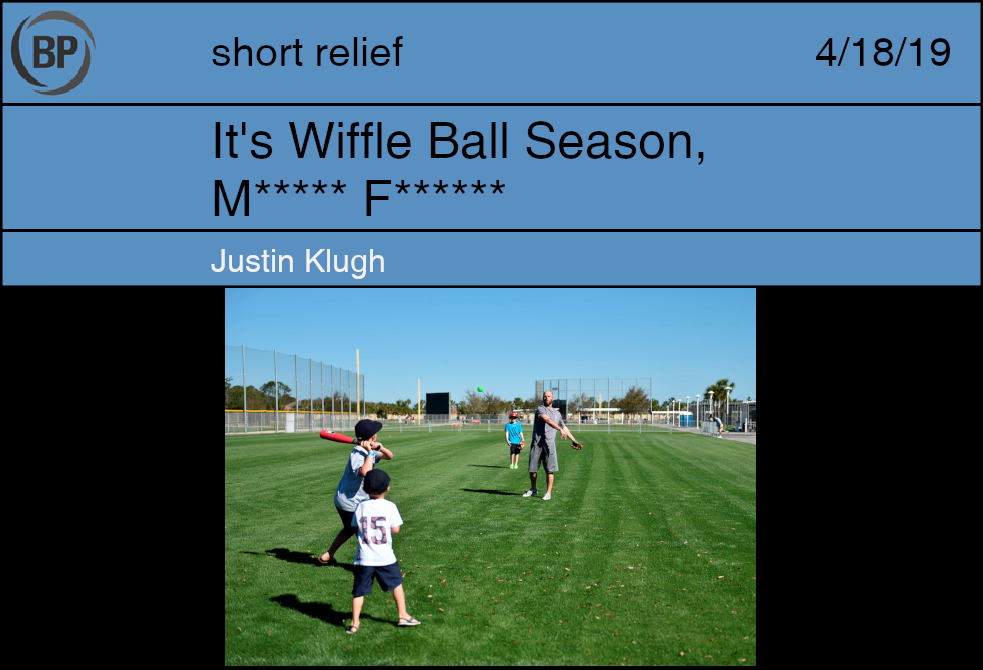 Everybody done? Yeah? All right, just go ahead and jam your paper plates and cups into that garbage bag that’s being passed around. Reapply the sunscreen. That’s right, uncles and neighbors, it’s wiffle ball season and no claims of “everyone’s pretty tired after cake, Justin” are going to change that.

Look, we were all excited for Nana’s birthday barbecue, but it was always going to come to this. We all knew that when we woke up and it was already sixty degrees outside with a family gathering on the calendar.

Of course everyone can play. I mean, age limits still apply. It’s a wiffle ball game, not a offer to babysit. And I don’t think Nana’s too interested, are you Nana? Ha ha ha. That sure is a lot of bourbon in your cup.

We have the big red bat here for children and cowards. That one’s been around since Stacy’s kindergarten graduation 12 years ago. I remember because I killed a bird with it and never told anyone. That’s how it got that weird, big crack down the middle. I think dad found it in a church basement. Congrats on your dissertation, by the way, Stacy. What’s that? She couldn’t make it? “Solving the Amazon water crisis?” How are they having a water crisis? Isn’t it all just wet trees down there?

Then we’ve got this skinny yellow bat for the seasoned veterans like myself. I’ve seen versions of this one in every suburban garage I’ve ever been in, and for some reason, that’s a lot. But I’ll bet this is the only one thrown like a spear at a neighbor’s dog after it wandered into our yard, right Darryl? Man, you had a pinpoint accurate arm. Whatever happened with that javelin scholarship? Hmm? Well why shouldn’t I bring it up? I didn’t hit him with the riding mower.

And of course, the balls. When we put them in that old green bag in the shed, I swear they mate in there all winter so that when we get them come spring there’s about forty more than when they went in there. We got balls with big slots, balls with fake seams, baseball-sized, softball-sized; a couple of these are a weird, sickly orange. Here’s the one Aunt Rita hit into the playground that connects to her backyard. I had the catch lined up but then her boyfriend that year pantsed me and I shuffled with my shorts around my ankles until faceplanting into a thorn bush. I still see Rod sometimes. He works at the Jiffy Lube.

Look, I don’t have to tell you. You were all here for all of these memories, and whether or not they are fueling our motivation to keep playing this game at family events due to a need for athletic validation available to us nowhere else or not, it’s time to break out big red and skinny yellow and play a few innings. You want to bat, Nana? That’d be fun, right? A fun little cameo for Nana with one of the younger kids pitching? Get that on Instagram? Let’s do it early in the game, though, before things get serious. What’s that, Nana? You’re too sore from CrossFit this morning? Huh. There’s a CrossFit right around the corner from my apartment, actually. No, I’ve never been inside.

All right, lean into the cake and ice cream sugar rush, clear the backyard of any obstacles or children, and I’ll steal some frisbees out of the neighbors’ yard to use as bases. Because it’s wiffle ball season, mother fuckers, and everybody’s swinging for the fences.

Watch it, there’s dog shit right here–and all over this area, over here.

You need to be logged in to comment. Login or Subscribe
John McGrath
Warren looks like he's in high school and one of his friends just threw something at the blackboard while the teacher was up there pontificating.
Reply to John