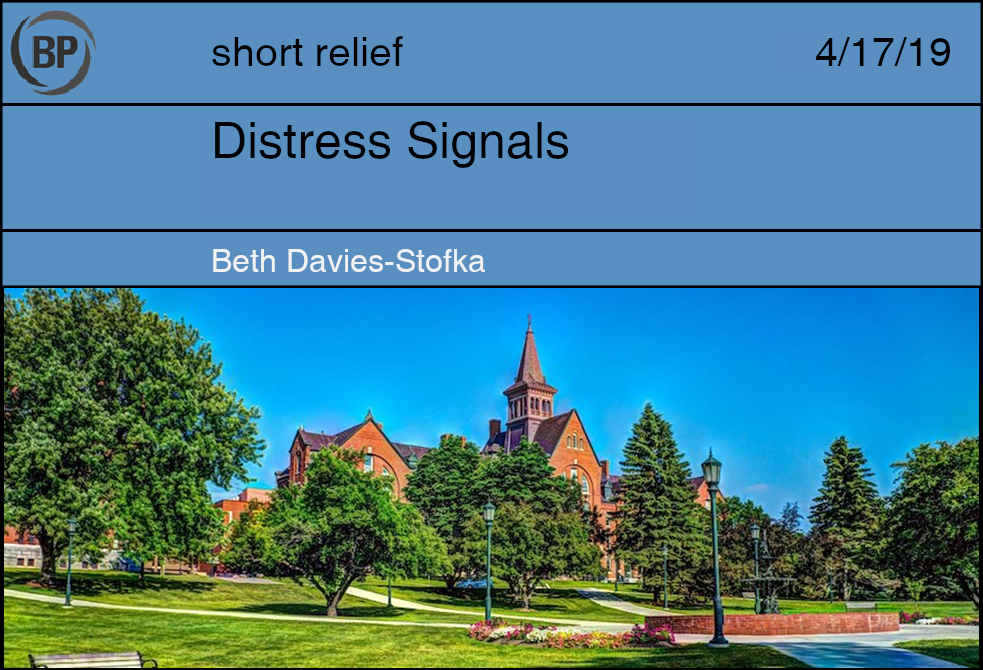 Hi. I’m a philosophy professor and department chair, and I have an SOS for you. Things aren’t going well. There are far too many students who don’t understand the art of written communication. I get emails that are so garbled, I can’t work out what they say. I recently read an essay that failed to distinguish Indian women of North America from Indian women of the Indian subcontinent. They were just an undifferentiated group of “Indians.” Pakistani women got included too, somehow. The essay was from a graduate student.

There are competent students, of course, and some that are stellar, but more to the point, there shouldn’t be any students in postsecondary education who can’t do the work. Writing is the foundation of critical thinking. It’s how we make sense of the complex world in which we live. Yet somewhere up the line, students don’t learn to write, so when they get to college their professors have to try to make up for it. The range of options is very limited, and it’s tiring. I’m tired.

The range of options is much greater in baseball, but it’s only mid-April and we can already see signs of wear and tear. Max Scherzer looked a little bit human in his Sunday start when he only struck out seven. The Pirates, meanwhile, looked confident. Their approach at the plate said, “This guy is really hard to hit, but I’m prepared and I have a chance.” And hit him they did, seven times, scoring two runs in the first and another in the third. But he also pitched eight innings. At 7.75, the Nationals bullpen has the worst ERA in the majors and Scherzer had to try to balance it out.

On April 9, Yoan Moncada had two hits, two runs, and two RBI on a two-run homer. That’s a pretty good day, but returning to the dugout after his other three at bats, Moncada looked disgusted with himself. He’s hitting .323/.364/.565, a big improvement over his career numbers, but he looked like he’s searching for answers. Granted, the expectations for Moncada are intense, plus he’s slipping after a very fast start, but there’s a more immediate problem. The delightful White Sox offense is trying to balance out a team ERA of 6.12, last in the league.

It’s got to be tiring, trying to make up for visible weaknesses with spectacular effort. Of course, there’s plenty of time for correction in the 2019 season, and for many, much-needed relief will come. But for now, I can testify that it’s really hard to get in there when you feel like you have to produce sky-high results every single day. And for teachers, there’s no relief in sight. 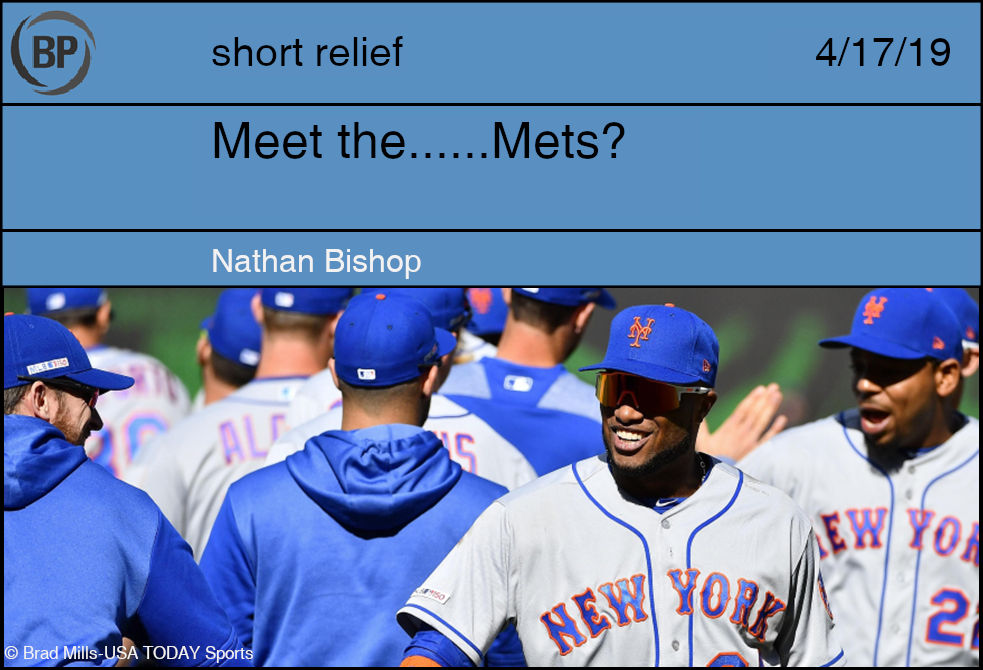 There are a variety of ways in which I am utterly boring and predictable, and one of those is that as a white, mid-thirties father of two, I enjoy afternoons and evenings after work with a baseball game on the television. Like dads before me and all dads to come, I find the languid pace of the game and silly, often-meaningless banter of the commentary team a pleasing backdrop to weeknight meal prep, homework-correction, and maybe even a short family board game.

Another predictable thing about me is that my family is on a budget, and as such we don’t pay for cable anymore. This means that our hometown team, the Mariners, is strictly off-limits for our little evening routine. As ideologically and morally aggravating as I find the idea of local media blackouts to be, and as much as I would enjoy watching my hefty, Northwest Green-clad adult sons attempt to raze T-Mobile Park to the ground with their mighty dingers, I’ve found the lack of emotional attachment to our evening baseball to be, rather surprisingly, delightful.

Take last evening – Dinner dishes complete, I wandered over to sit next to my eight-year old. She has started using a bluetooth keyboard and iPad to transcribe passages of her favorite geology books (this is the hot craze of the month for her). She does not entirely understand what “igneous” means, or the difference between “quartzite” and “gneiss”, but she enjoys carefully and precisely digitizing the words of her books onto the screen. I sat close to watch her, my periphery aware that on the TV it seemed very cold wherever the Phillies and Mets were playing.

Ten minutes passed, and Jeurys Familia threw two (2) strikes. With the bases loaded in the eighth inning of a tie game my 11 year-old flew into the room, his tepid baseball knowledge roaring to never-seen levels as he bellowed:

“ROBINSON CANO ON THE METS WHAT IS THAT!?! THAT ISN’T RIGHT! THIS IS STUPID!”

He returned to packing for camp, and my daughter to her transcription.

The Mets ended up winning. Edwin Diaz, another bizarro-Met, blew through the heart of the Phillies’ lineup with his trademark dragonfire. We went about our evening, smiling just a little bit more than we would have without that experience.

I have loved baseball my entire life. There have been long periods I imagined it being my career, and where I have followed it obsessively. Now, in a different time of life, I find it more at the margins. In both extremes, and all those in between, baseball somehow finds a way to give me what I need. I always return to where I started as a child smacking wiffle balls in the yard, imitating Jay Buhner, Tino Martinez, and of course, Ken Griffey Jr. Baseball is a beautiful game. 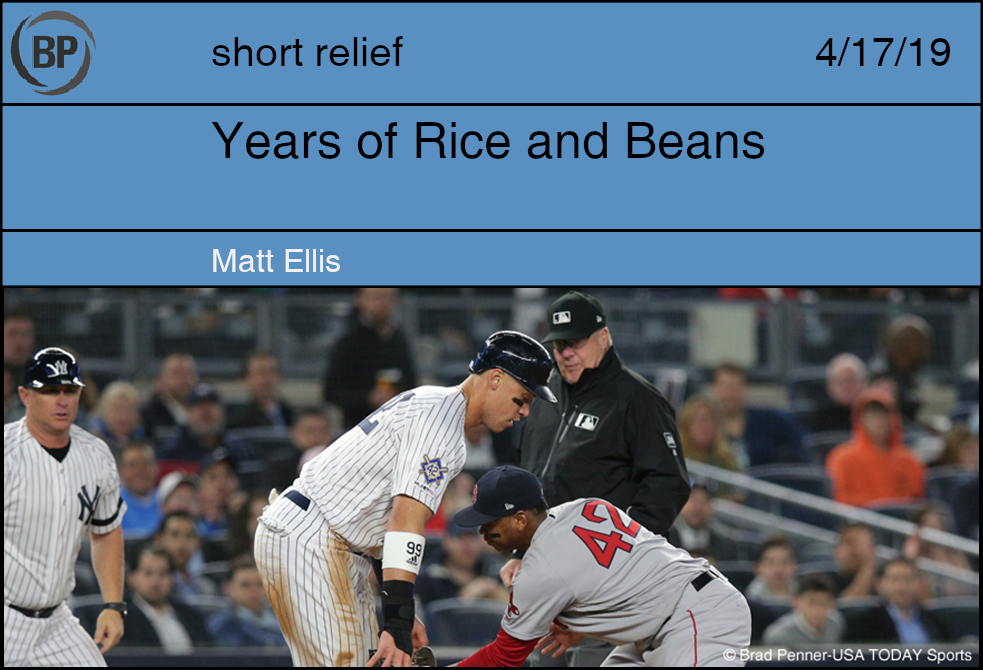 As I write this, the Boston Red Sox are playing the New York Yankees in New York, and they are down by seven runs to none. It’s been a bizarre year for the reigning World Champions, bookending their season with an ace, zillion-dollar pitcher with a possible elbow problem and a DFA of an otherwise serviceable catcher who is probably about to go hit twenty dingers for the A’s, or something. But before you feel bad for the Boston crowd, the Yankees themselves are suffering from the freak injury-bug that has hovered over this season like a doomcloud: both teams sit far under .500, and while it’s still early, they have a long way to go to make up for already lost time.

I thought about this while I grabbed a beer at the afternoon bar I stop at after teaching, and I thought about both expectation and necessity. An expectation that two franchises that always get airtime on MLB Network or ESPN simply due to their deep history might actually not provide anything worth watching whatsoever, a necessity that baseball history try to point you back to the true franchises and ignore the blossoming Rays, the unlikely Mariners, the 11-6 Brewers.

Kim Stanley Robinson wrote a book a while back called Years of Rice and Salt, an alternate history novel considering what would have happened had the plague killed almost all of Europe’s medieval population instead of only the third it did. Crucial to this narrative is a decolonial reimagining of world history: It argues why an “imaginary” that fewer European peoples would have lended itself to something like Asian hegemony in global politics while forgetting the fact that it’s entirely possible that event is already underway. But I thought about that today while watching this game, and I thought about how many narratives we assume sit outside history, telling us both the past and the future are to Be Done, predetermined, and that only a radical reimagining could consider anything else. An MLB Network which airs twelve Orioles games instead of another Sox/Yankees marquee matchup.

The Yankees are going to win tonight, and the Red Sox won’t lose as many games as their pace reflects, but neither team remains the favorite to win the World Series this year. Right now that feels odd, but in October, of this year, and in October of 2074, that will not feel odd whatsoever. I think part of baseball’s short term problem is precisely that we come expecting years of gold when we not only get years of rice and salt, but years of rice and ten-cent bean cans mass produced on the open NAFTA market that is postmodernity.