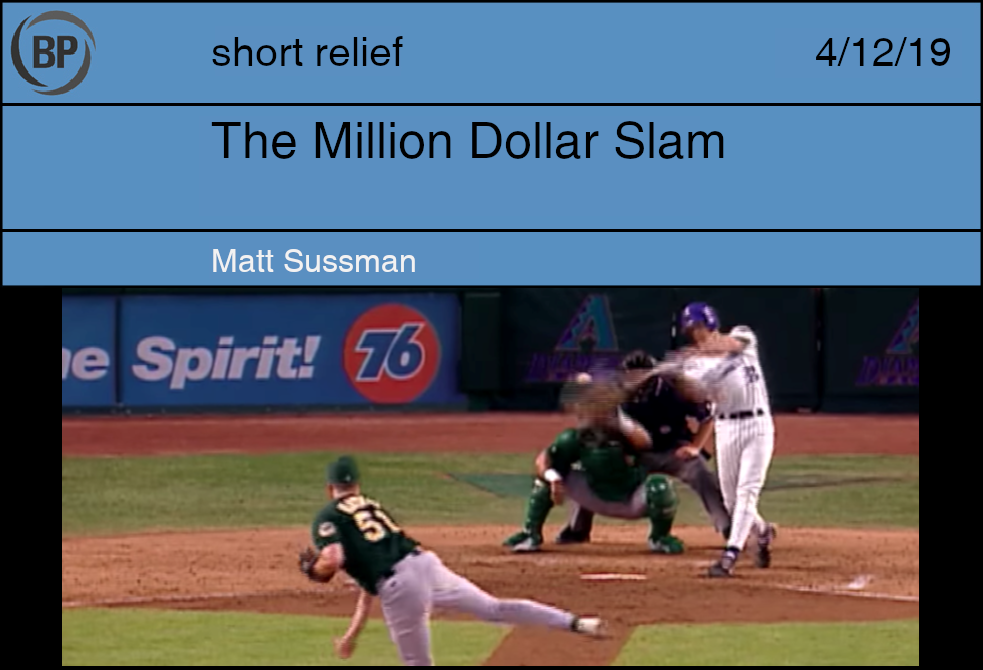 Twenty years ago Jay Bell had a career year for the Diamondbacks: a 131 DRC+ highlighted by a career-best (and team-best) 38 home runs. He helped Arizona reach the playoffs in their second year of existence, but one home run changed everything for a family. You may not remember the Diamondbacks, as in those Diamondbacks. It’s confusing: there is still a Diamondbacks team in the major leagues, but those Diamondbacks folded in 2006 and was replaced by a team with the exact name, simply with a red and beige color scheme and Tony Clark, for some reason. Today they play in weird graphite and teal jumpsuits, like if the Easter Bunny also went down the chimney.

The late 90s were wild times in desert baseball festivities. Securely in the middle of the dot-com bubble — at least that’s what I’m making the excuse — a radio station sponsored a million dollar contest: every Sunday home game a contestant was chosen at random to win four free tickets to the game. And prior to first pitch they’d secure the million-dollar pot if they could predict which batter would hit a grand slam, and in which inning. There were 13 home games that year, and this was the eighth such game.

On Monday I ran an extremely small experiment to recreate this contest, only I gave myself much bettermoment odds by naming a player for each of the 20 teams, because I did not think this through and forgot they do off days on Mondays. Nonetheless, while grand slams do not happen every day, by fortune one was hit, and you’re not going to believe this, but “Kevin Pillar in the fourth” was definitely not on the prediction list for the Giants entry. (Buster Posey, fifth.) But four of the batters at least homered that night, and twice even did it in the right inning (Trevor Story in the fifth and Justin Bour in the eighth). That was probably luck. Only one of the batters even had a bases loaded plate appearance (Ji-Man Choi, and twice, but neither in the correct inning.) Still, I felt close enough to never do this again.

As the original story goes, Gylene Hoyle and her family weren’t baseball fans but were happy to simply have a fun-filled day at the ballpark. They weren’t too sure which baseball players were good, because it was just their second year with professional baseball men in town. With help from relatives who knew some of the names, they settled on Bell and randomly chose the sixth inning. This is where lack of baseball knowledge is such a benefit. Going into that day, Bell hadn’t homered in 18 games and was hitless in the series.

As the sixth approached, Bell was due up seventh. He also knew of the contest and his role in it. A double, groundout, double, walk, pitcher sac bunt and walk resulted in Bell stepping into the plate. Also a sign of the times, Athletics pitcher Jimmy Haynes was over 100 pitches and surrounded by baserunners in a 3-3 game the day before the All-Star Break and where in the world was Art Howe when all this was happening? Bell finally swung at the full-count pitch, shoulder high, and deposited the seven-figure sphere into the distant seats.

We’re probably not going to see such a high-stakes prize where eligibility includes correctly guessing a baseball player in the ballpark and knowing a number between one and nine, mostly because everyone knows about launch angle, even though we no longer let starters twist in the wind in the sixth inning. Now if you want to get rich at a baseball game with little effort you just have to own the team. That lottery probably isn’t going away. 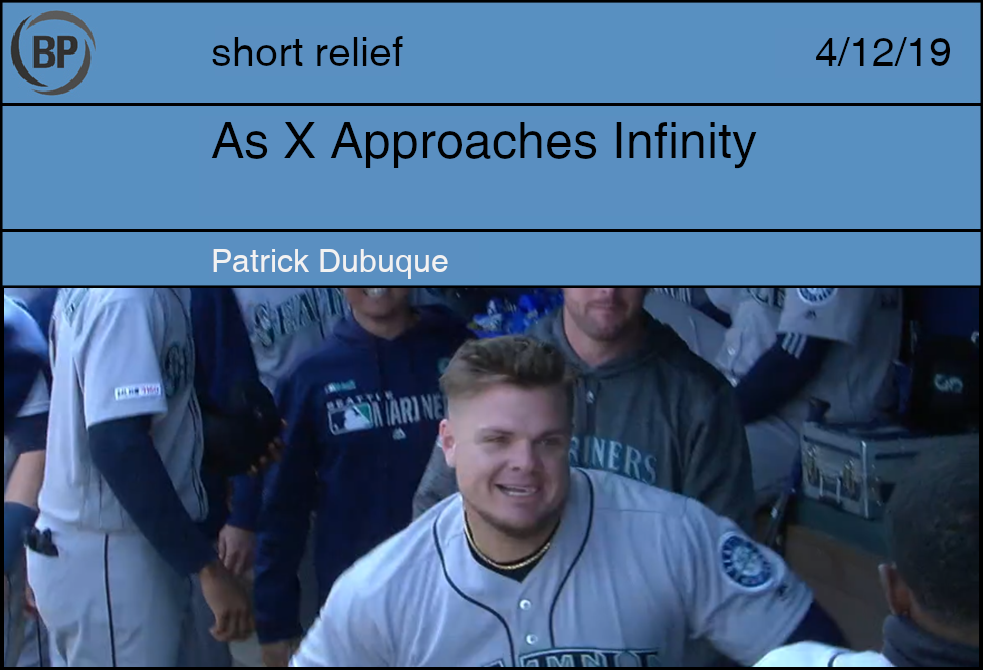 Setting: the van, driving back home from my daughter’s dance class. My legs ache from thirty minutes on a nearby stair machine, and gesture toward the pedals rather than press down on them. Sylvie sits in the back, a bandaid patched over a hole in her tights. She had danced, apparently, too hard.

“When we get home, can we play while Mom makes dinner?”

“Of course. But you know we have to play with your brother too, since Mom’ll be busy.”

“Oh, man.” Sylvie loves her brother. But he is three, and thus, limiting.

“You know, soon your brother will be a little older, and he’ll be able to play games and Legos with you too. Not long.”

“Well, you two will be teenagers in no time. Tomorrow, practically.”

“But by then you’ll be old.” She waves her hands out in a gesture of senescence.

“You mean like grandpa old? That’s a long way from now, Sylvie. By the time I’m grandpa old, you’ll be me old. And imagine how long it’ll take to get as old as me.”

“But someday you’ll be a hundred years old, and then you won’t be able to play,” she says. “I don’t want you to die.”

“Oh, kid. I mean, we all die someday. If I live to be a hundred, then I’ll have gotten a lot of time with you.” This has no effect. “Besides, there’s no sense worrying about it. Right now I get to go home and play with my two favorite kids in the world. That’s all that matters, you know?”

She thinks about this. “I want to play Legos when we get home.”

“You have to be Batman.”

“You, uh… you sure you don’t want to be Batman for a change?”

“You do the voice better. I AM BATMAN,” she growls, doing it perfectly.

Later, a message from a good friend, regarding the Seattle Mariners:

E: you have to love these guys
P: I have to understand them first

But do I? The 13-2 Mariners defy every attempt at explanation, like the archaea that dwell inside the hydrothermic vents on the ocean floor, living in spite of itself. They make as much sense as my daughter does, arriving home with dozens of forgotten dandelions wadded in her pockets, waiting for the washing machine to tear them apart. The randomness of kindergarteners and Vogelbachs are some of the best things in life. And yet every day I check the playoff odds, do the math: if they do play .470 ball, how many more wins will be enough? How does this turn out? I’m no different than my daughter, caught peering at the horizon. We all do.

We all want to be teenagers. We all want to see confetti. What we should want is to never get to either. To be so tied to the present moment that we never see the end.