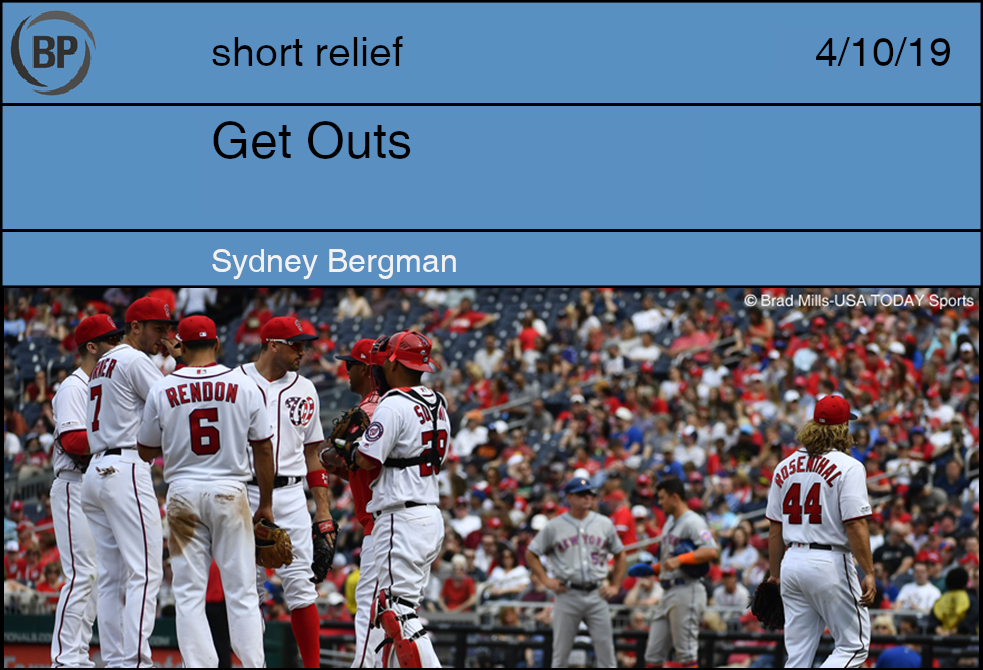 We’re more than a week into the 2019 baseball season and Trevor Rosenthal has yet to record an out, leaving him with an ERA of literal infinity. His job has an astonishingly simple description – get outs – though like most things that can be described simply, it’s of course infinitely more complex than that. Still, Rosenthal has failed his job’s most basic aspect: He hasn’t gotten anyone out and has the dubious distinction of being the biggest problem in a bullpen that has, both historically and presently, been a nexus of fiascos.

I don’t know Rosenthal, and I can’t speak to his emotional state. He’s repeatedly said that he’s fine, at least mechanically, though having an ERA that’s so high it’s the place at the end of the number-line is liable to bother even the most mentally resilient. And of course, each lack of out isn’t done in isolation. Regardless of mechanics, every un-retired batter probably produces the next, as the thing that he has done for the entirety of his adult life – throwing a baseball in such a way that batters don’t hit that baseball – skids away from him as we all watch.

It’s taken me both a few hours and several months to write this. I don’t have writer’s block; I just haven’t been able to write anything. Is it the writing ‘yips?’ Maybe. Maybe I just don’t want to put a name to something, to give it that much power over me. But I can say that there is a spike of anxiety every time I open a new document, the blank of it staring at me like thousands of spectators, waiting, expectant.

If I had to describe anxiety, it’d be like this – a tumultuous oil slick somewhere in my chest, a storm-cloud that won’t let me sleep. Increasingly, like I’m alone, surrounded by people watching me fail, 60 feet from anyone who can provide assistance.

I’ve never thrown a baseball in a professional setting – but I’m old enough and far enough along in my career to have a few bankable skills, writing among them. I’m not sure what I’d do if I woke up tomorrow and found that the well of words I draw from was sealed shut. And there’s always that fear – that the thing that you go to, that thing that lets you do what you do, will evaporate, leaving you desiccated. Every time I begin something and don’t finish, there’s that fear – what if the last thing I wrote is the last thing I’ll ever write? What if the last out that you record is a swinging strikeout of Nick Markakis in August of 2017?

Maybe it takes faith – not the big ‘F’ kind, but the smaller kind, that sits against your ribs and crowds out everything else, at least temporarily. The kind that says, even though you’re struggling, this too will pass. That the next words you write will be some kind of decent. That the next pitch will invite a called third strike from a generous umpire. That there will be a next time, and a next. 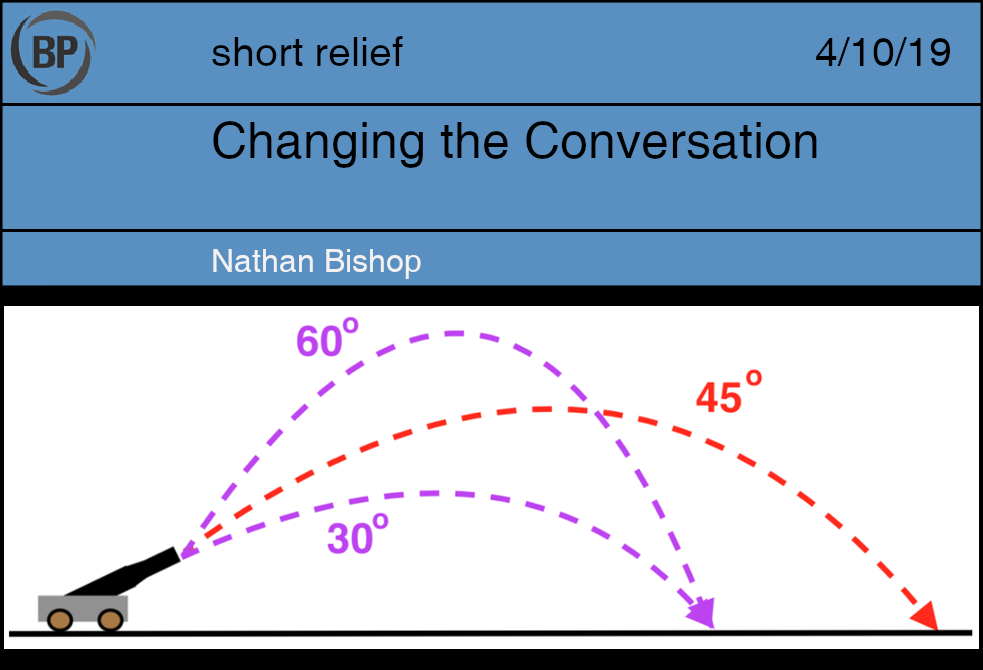 Guess what, reader, it’s 2019! While you were at work running TPS reports for your boss Hal, buying groceries on the way home, and trying to grab 30 minutes of exercise before getting up and starting it all over again, baseball has changed! While the players are better than ever, thanks in part to exhaustive, scientific analysis and testing, the way we talk about it has taken a decided turn away from its everyman past.

“Ribbies”, “two-baggers”, and “pitcher wins” were and are bad ways to evaluate the sport, but they were excellent additions to the cultural lexicon of American life. “Launch angle” and “Exit velocity” are fantastic contributions to the study and better understanding of our game, but they are terrible things to try and shift conversation to when Uncle Frank starts getting Problematic during Family Dinner Tuesdays. We need to do better, and I think we can. My ideas:

Exit Velocity: Let’s start with the worst one first. Hitting a baseball extremely hard is one of the more pleasing things to achieve and/or view in sports. We’ve been celebrating it as such for years, and with some terrific language. “Frozen rope”, “Screaming mimi”, and “Piss-rod” are all excellent descriptive terms for a ball thoroughly and pleasingly thumped. “Exit Velocity” sounds like something you measure from a weapon. It’s cold, clinical, and does nothing to convey the pleasing lack of feeling in your hands and arms when a ball meets a bat just so.

Launch Angle: Look, NASA is a miracle. The ability to launch man-powered rockets into space safely and explore the cold, inhospitable blackness of space is one of our species greatest, most life-affirming achievements. THAT SAID, we don’t grab little Estes rockets off Amazon, stuff them into baseballs, march them into fields and shoot them into the sky. Maybe we should do that, in fact to be honest it sounds pretty rad, but we don’t, and so we don’t need a term that makes it sound like we do.

Look, we get it, it’s good to hit the ball in the air. Ball in air mean ball go far. Ball go far mean home run. Much yell and whoop and win hooray. I’m a simple man but I understand. That said, we can and should do much, much better.

Proposed alternatives: Angle of the Bangle, Air Balls, A Fly Ball, literally just call it a fly ball it’s what it has always been and what we have always called it. Congratulations, Silicon Valley, you invented a fly ball.

There are other regrettable terms the sabermetric revolution has brought to the grand old game, and I would and could spend all day with you here complaining about them. I am an old man, and the world is my cloud. Sadly, however, Short Relief has a very strict maximum word count which I am just about to 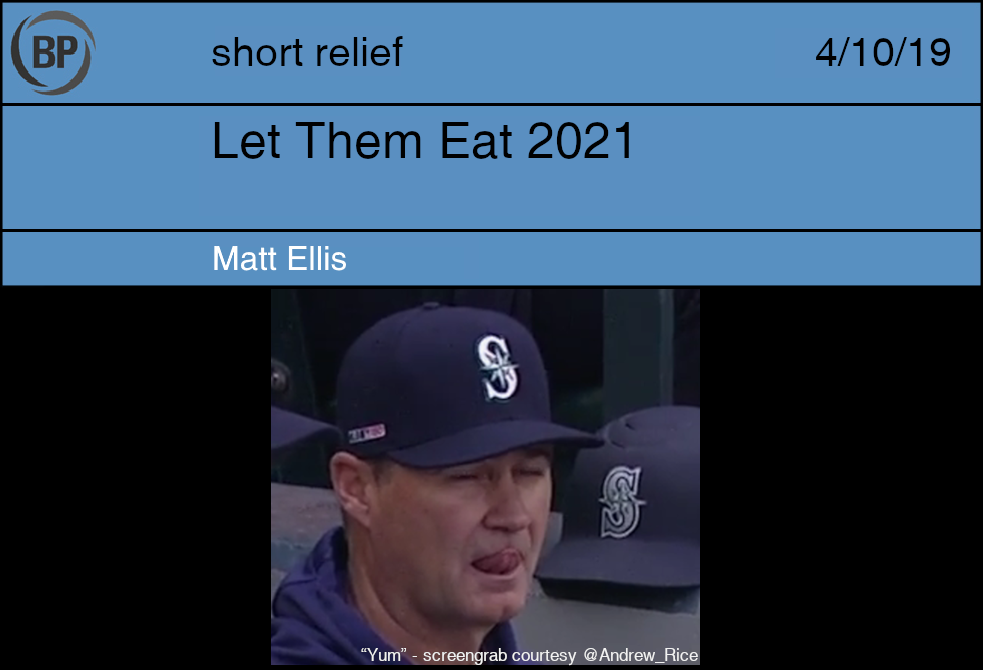 I used to write about the Mariners. A lot.

It would look different from year to year: in one, I wrote like 100 recaps of meaningless baseball games which featured the Major League debuts of Nick Franklin, Taijuan Walker, and James Paxton. Another year I wrote fewer articles, but I had to recap Felix Hernandez breaking down into a million pieces in a summer game against the Astros–he’s never been the same–while living 3,000 miles away from the place where my team plays half the year. In another, I wrote literally two pieces, and still called myself a “Mariners writer.”

Nevertheless, when I took this gig at Short Relief I knew that I was making the transition with some fellow Mariners writers, but I told myself I can’t just write about the Mariners every week. If that’s what I wanted to do I had other options. And yet, I’m very sorry, today, Year of our Lord 2019, April 9th, I have to make the following concession, about the Seattle Mariners:

The Mariners are two weeks away from a destiny with statistical inevitability: they currently lead both leagues in hits, runs, home runs, total bases, runs batted in, and slugging percentage. They are second in OPS, and in the top five for on-base percentage, average, doubles, and total at-bats. None of this will last–their totals are buttressed in part by overperformance but also the additions of Jay Bruce and Edwin Encarnacion, neither of whom were ever supposed to be on this team in the first place. Soon their bats will calm down–nay, meet league average–and the losses will start to pop up.

But the reality of the situation is that I’ve spent nearly the entire 2010’s as someone who has more than just a fan’s responsibility to following the Seattle Mariners, and every year I reconciled myself to the futility of following the worst franchise in all of professional sports, leaving me now to question just what it means that this team can’t even tank correctly.

I think I’ve come to a conclusion: the absolute funniest, most incredible, exciting, exhilarating, heck–even enervating experience would be to watch a team that has run through four GMs, almost ten managers, and by all accounts I bet 200 players, manage to make the playoffs in the one single year of the last eighteen they weren’t literally, actually trying to make the playoffs.

So sign me up. I spent 2012-2017 wanting the Mariners to Make It, and was skeptical last year. But this year? No more skepticism. The doomsday clock is literally set two minutes to midnight as you read this, and there is no guarantee that Jerry Dipoto’s 2021 plan–which requires every single minor league prospect to blossom into a deadly threat–will work whatsoever.

So why not? Let’s go Mariners.

You need to be logged in to comment. Login or Subscribe
Cameron eadie
I think your Base-Out State has been reset to zeros , Matt.
Reply to Cameron