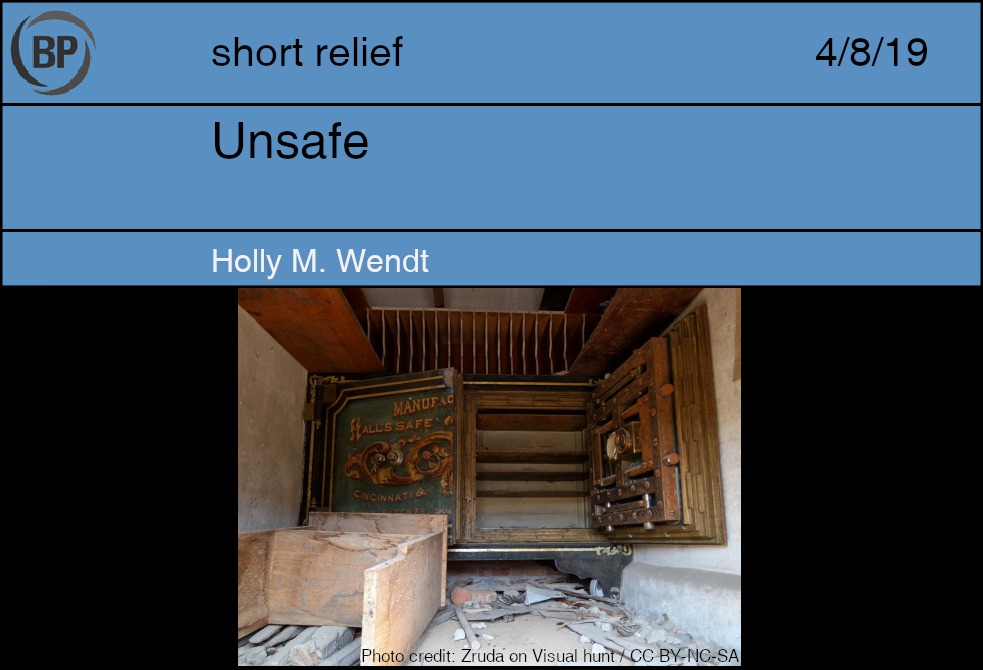 On Thursday, Markus writes out a to-do list: create the new front desk schedule, place necessary orders for tiny bars of soap and little bottles of shampoo, pay invoices for vacuum cleaner repair and swimming pool chemicals, deliver the previous day’s deposit to the bank. The paperwork goes quickly enough that he starts to dream a little; he’ll leave his desk at eleven, get to the new sandwich place before the rest of the lunch crowd, and be in and out of the bank before the teller even closes his window.

He’s the first one in line, and the woman behind the counter piles corned beef high on a fresh roll as brown and glossy as glove leather, the crumb inside like clouds. He’s already thinking about the park bench, the sunshine, how good it’s going to be, how close to home in his heart a moment like that is.

Markus takes the bag and carries on to the bank, where his usual teller waits at the third window, the old-fashioned Schwab just past his shoulder. Markus likes the hulking, aged thing, the way it gives the place some presence, a sense of security he doesn’t feel in the wide open First Whatever Banks, with their slick tile and white marble. On days like this, when no one else is here, the teller lets Markus lean past the counter and watch while he carries the deposit bag to its destination. There’s something so satisfying in the tidy slide, the knowledge that all that effort–made tangible in this imperfect but still present way–is going to land there, safe.

While Markus leans, a sound like an arrow approaches, waist-high. Something strikes the paper bag in his hand. Then there is a muffled bong, and the teller is caught short of the safe. The bag of money is gone. Maybe vaporized, Markus thinks for one wild second, so laser-like was the sound.

The sandwich has been torn from Markus’s hand. Against the safe’s squared base, the bun, a baseball clapped in its soft mahogany grip, the room still ringing with the force of its tag.

“My friend,” the teller says, “you’ve been robbed.”

The culprit is already to the door, his name written in bold letters across the shoulders that turn toward the security camera as he lopes back into the green world. Laureano. 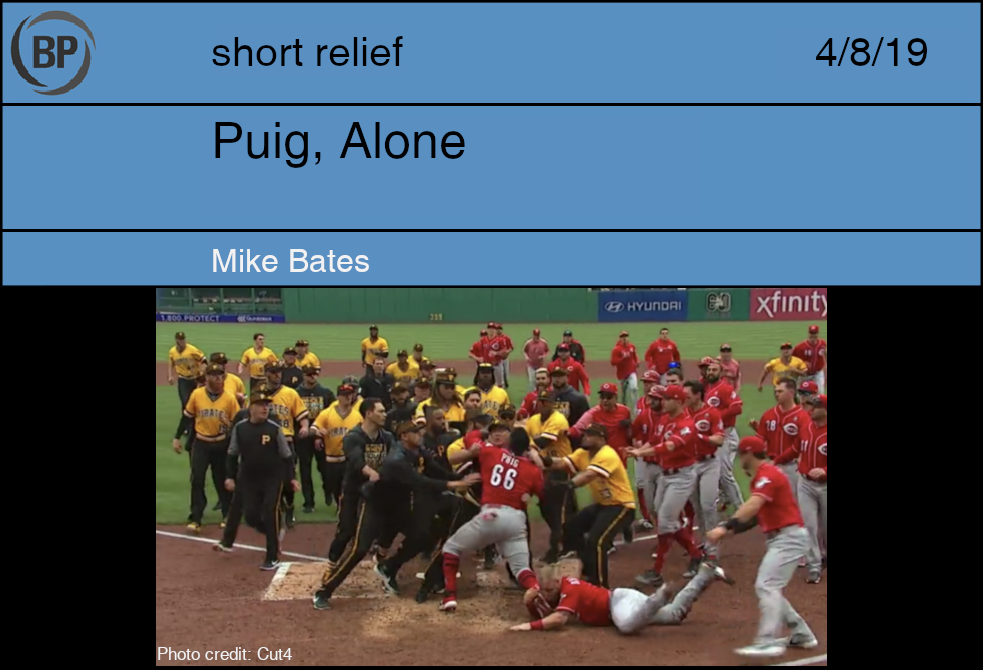 Sometimes, my friends, we feel like the deck is stacked against us. That we face immeasurable odds. No one told us life was going to be this way. Our jobs: a joke. We’re broke. Our love life’s DOA. Like we’ve always been stuck in second gear. It’s not been our day, month, week or even our year. It can feel, quite literally, like it’s us against the world.

Yasiel Puig knows how you feel.

Look at him. Defiant against the odds. Bracing himself for the wave of Pirates to crash upon him. Will he be swept away? He can’t know for sure. But what he does know is that he must meet his fate.

Now, don’t get me wrong. Baseball brawls are stupid affairs. Someone’s manhood has been challenged and so they must either throw at someone or charge the thrower. It’s all very agro and pointless and would be far better addressed by winning the next matchup in convincing fashion. That way no one risks separating a shoulder from being thrown to the ground, having their fingers broken after being stepped on, or looking like a ninny who just stands around pushes people or holds others back.

We are a world of posers. We pretend to be how we want others to see us, whether that’s on social media or in bars or on the ballfield. We perform ourselves into being far too often in ways that are unhealthy. But 95 percent of it is an act. A cover for our insecurities.

But who could think that of Puig, prepared to beat himself upon the rocks until he is broken? There is, at least, an uncompromising nobility in that. No one can doubt the sincerity of his actions or of his rage in that moment. Indeed, all you can do is to fight back when a wall of Pirates bears down on you. You will almost assuredly be trampled. But to go down swinging is a small victory in and of itself. 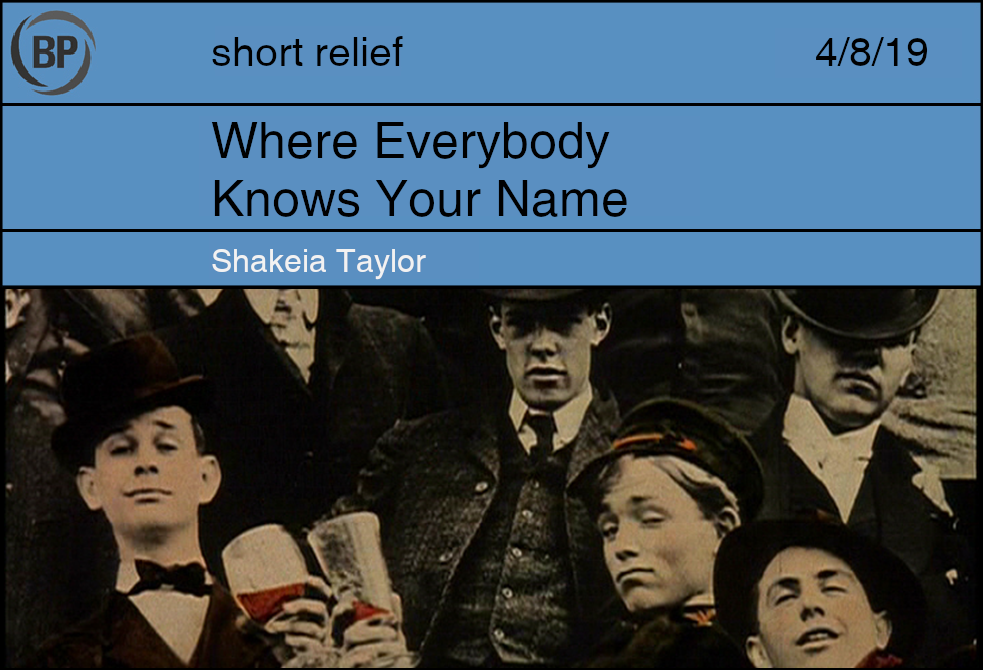 It’s not very well-known that Cheers might be one of my favorite shows ever. The show debuted in September 1982, two months before I was born, but it is an absolute classic. Sam, Coach, Carla, Norm, Cliff, Diana, Frasier, Lilith, Woody, and Rebecca all either worked our hung out at the Boston watering hole night after night. They laughed, they cried, they pulled pranks, they talked trash to each other, they loved, they lost, and occasionally, they talked about baseball. They were friends. Friends whose lives crossed paths over a few beers. I, too, have a favorite bar. And bar friends. Scratch that, they’re just friends.

My favorite bar has a countdown to day baseball and the Christmas decorations were still hanging in March. It’s my favorite place to be when I am not at home, though sometimes I wish it had a couch. There’s 100 bottles of Jeppson’s Malort behind the bar. There’s tape on the floor from an old “malort race.”

Hanging out there is like being in my living room with my friends, but you know, with a professional pouring the drinks. I am at this bar so much, upon opening my ride share apps, my shortcut options are work, home, and my bar. For me, going to this bar is like going to a casino for others: I lose track of time and end up staying well into the night. Okay, I stay until close.

We talk about life a lot. And we make fun of each other. And we go to baseball games as a group. And we drink. Looking at us, we don’t appear to be a group anyone would expect to hang out together. Not at all. We are an odd bunch. We specialize in weird and rowdy. Just like the group on Cheers.