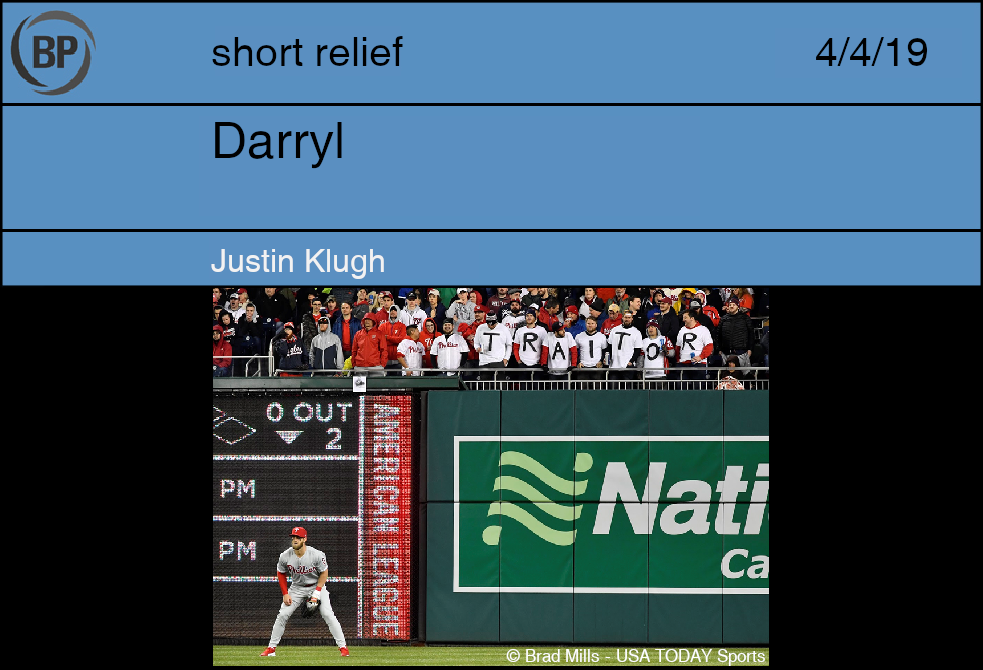 The rain had started around midday, and it couldn’t have matched the mood more accurately. Bryce Harper‘s return to Washington had been anticipated so much by local fans in a cold, sad way. With no motivation to root for their former star, Nationals fans had enthusiastically embraced Harper’s new villainous role, with many using duct tape or permanent markers to try and erase the past on their jerseys, altering them so that his name was transformed into gutting insults like “POOPER” and “FARTER.”

I made my way from Union Station to Nationals Park by foot, and D.C. was quick to introduce itself. A young guy in a suit vaped aggressively by me at an intersection, saying into his phone, “How’s your ass doing?” A police officer asked me how many home runs Harper was going to hit tonight, we settled on two (we wound up being only half right).

I had started to jog, realizing that Harper’s first at-bat of the game would come quickly. For some viscerally emotional reason, I felt like I had to be there for the crowd’s reaction that everyone had pretty much predicted and which, when it happened, followed that script exactly. Nevertheless, I had come this far, so I wanted to be there on time.

So did Darryl. I heard his footsteps and glanced in my peripheral, as you do in a big city when you hear quickened steps behind you. He was a middle-aged guy with a gray beard and a Nats jersey, and his light jog forced me to match pace with him.

For some reason I was desperate to give Darryl an explanation for why I had stopped running. So, we jogged together in silence for a little, talked about where we were from, what Nationals Park was like, at one point he pointed out that my train ticket had fluttered out of my pocket and landed in a puddle.

The game to which we were breathily jaunting had been hyped up all week: Nats fans would be at Harper’s throat. Phillies fans would have invaded the stadium. The whole thing reeked of drama, and because of the rain, the smell lingered. Making my way toward it with Darryl was a reminder that whatever happened in that stadium, at least we were all able to pretend we were okay outside of it. Understandably, he was a little more driven to get there on time, where I and my lungs were willing to take it slow.

Then, we reached a corner outside Nats Park, where the crowds started to intensify and he turned to face me.

“Darryl,” he said, introducing himself. “In case I lose you, it was nice to meet you.” We shook hands, and he went trotting into the distance, disappearing behind patches of waterlogged Nats fans.

“Your dad knows the game is delayed, right?” a guy asked me. 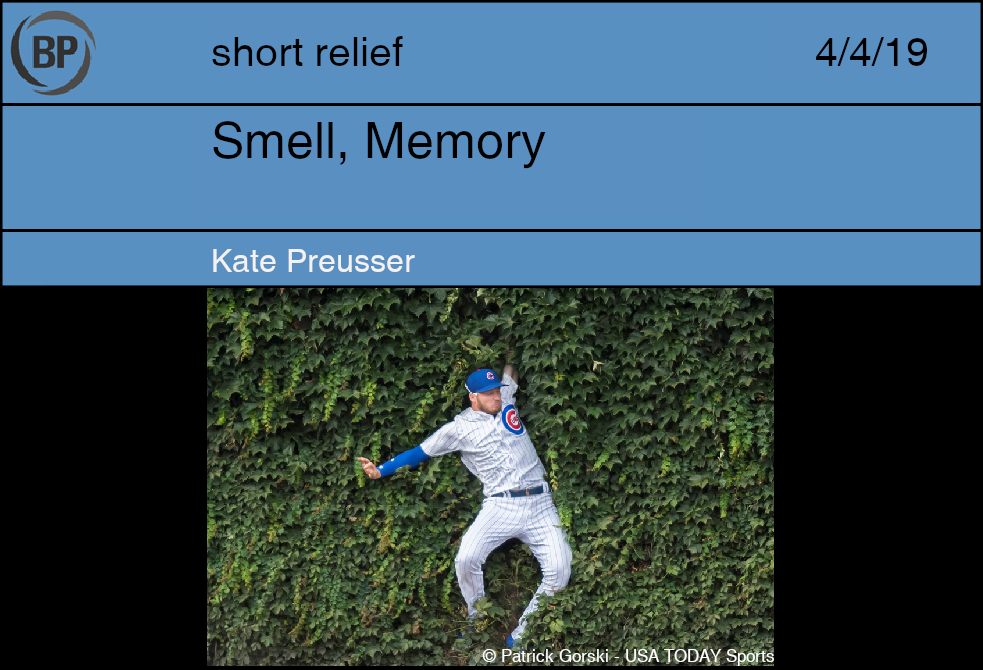 This Monday, the Cubs account tweeted out a teaser for a three scent collection called “The Scents of Wrigley Field”: Dirt, Leather, and Ivy. I was excited at first before realizing it was that cruelest of japes: the April Fool’s Joke. As the owner of several perfumes that proudly proclaim to contain notes of the above scents, I would happily wear Dirt, Leather, or Ivy, or preferably layer them all together. Admittedly, my taste in perfume runs to the obscure, the outré; much like in other areas of my life, I prefer the theoretical to the actual. My current favorite is called “Cape Heartache,” from Imaginary Artists, which smells like a foggy Northwest forest, but after a visit to the Desert Botanical Garden this spring training I’ve become partial to Larrea from La Curie, which recreates the smell of the desert after a rain with “chaparral, parched leather, ocotillo bones, and lost canyons.” Mostly, I like perfumes that tell a scent-story, a mise en scéne, a book that opens to the middle with one spray. Marcel Proust with his madeleines understood the power of scent to transport, its ability to “bear resiliently, on tiny and almost impalpable drops of their essence, the immense edifice of memory.” Scent is tied powerfully to memory, as is taste, and specifically “involuntary memory,” almost like a string that tugs one immediately back to that moment in time. Unlike visual memory, which can be compromised by photographs, scent and taste are directly experienced, preserving the undiluted memory as if in a piece of amber.

Being able to recreate the ballpark – my favorite place – in the dark of winter, would be [insert “take my money” .gif here]. For any boutique perfumers reading this, here are some suggestions for park-specific scents: 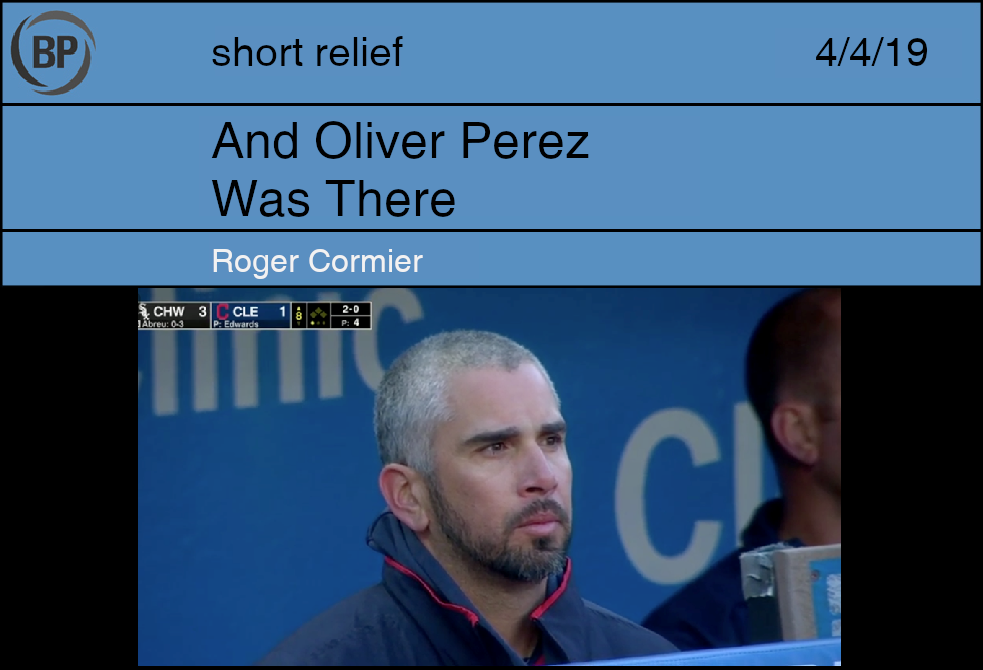 A Mets season ended on October 19, 2006, when Oliver Perez started Game 7 of the NLCS. The Mets lost, but Perez didn’t. One earned run in six innings from Ollie. it still would have been a three earned run, six inning appearance if Endy Chavez did not make his amazing catch, and that my friends is a Quality Start. Perez was pitching on three days rest too. And man, the Mets did not want to put him out there either time. They traded their starting right fielder for reliever Roberto Hernandez on July 31, after very early that morning their hotshot bullpen piece Duaner Sanchez got into a taxi cab accident (he was hungry, and Uber Eats was eight years away) and messed up his shoulder. Ollie and his 6.63 ERA just happened to also be sent from Pittsburgh to New York. He was a guy who flashed signs of becoming the next Sandy Koufax (lefty), and those flashes usually lasted one inning at a time, evenly spaced out over two months, and that was kind of enough back then. He didn’t improve that ERA very much in seven starts for the Mets during the last two months of the season, which made him unnecessary. Pedro Martinez and El Duque injuries made him necessary. He didn’t screw it up. All the same, when the team that won the NL East by 12 games lost to the 83-79 Cardinals, in such a heartbreaking way you know you will never forget it, Oliver Perez was there.

A Mets season also ended on October 3, 2010. Mercifully. After late season collapses in ‘07 and ‘08, there were much less dramatic, just as miserable seasons in ‘09 and ‘10. A championship window definitively closed shut, just as soon as the Nationals and Mets stopped playing Game 162. The Mets were forced to bring in Perez in the 14th inning of a 1-1 tie, even though he had not pitched in almost a month. That will happen when you refuse minor league and rehab assignments and get yourself demoted to the bullpen in a -1.4 WARP year while making $12 million, and your pretty decent 2007 season is long forgotten. He walked in the winning run, of course, booed by those who remained in the ballpark to see out the 4th place year. In one of the funniest displays of wishful thinking in recorded history, the Mets network SNY’s score bug briefly declared the game a final, even though the Mets were legally required to try and at least tie it back up. They did not. Thank goodness. The whole enterprise was so embarrassing and awkward it is a minor miracle the game of baseball survived it. You will never forget it. And Oliver Perez was there.

A Mets season was just beginning on April 1, 2019. Before they play their game in Miami you put on ESPN. Cleveland was hosting the White Sox and Oliver Perez screwed some things up. “Wow,” you think. “He is still around”. He made himself into a new man. A LOOGY man. He drives a car a stereotypical LOOGY drives, wears the clothes LOOGYs wear. But you still recognize him. Then you think. Then you remember David Wright retired a few months ago, and Jose Reyes mercifully was not asked to come back. Then you check the 2006 roster again. You look down the list, progressively slower the more you scroll, because you can feel it before you confirm it. Yup, Oliver Perez is the last active member of the 2006 team. You have never felt older than you have in a long time. You will never forget it. And Oliver Perez was there.