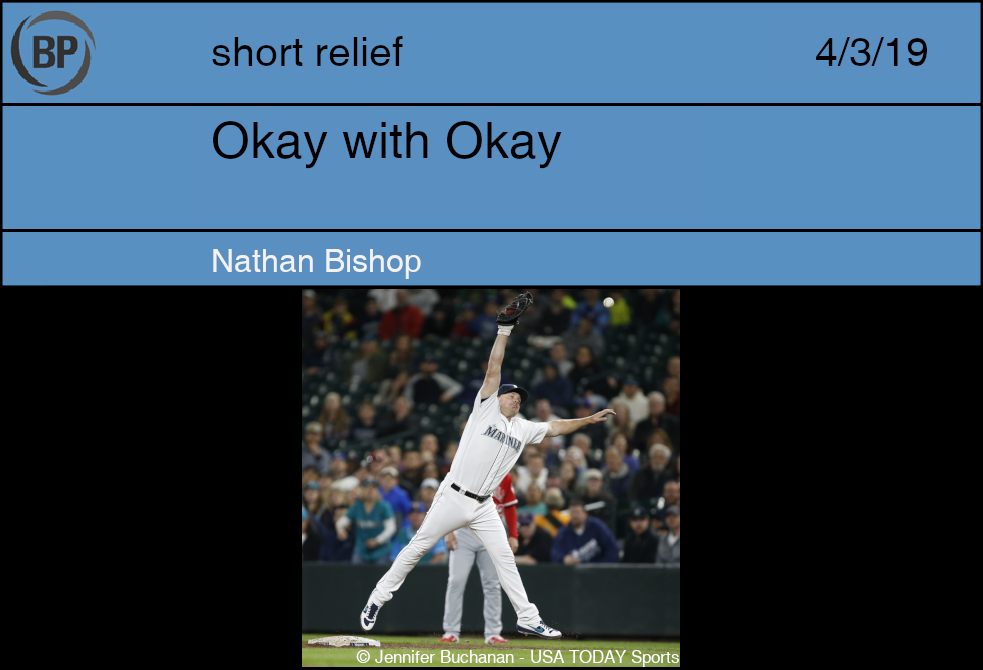 I am 37 and married with two kids. It is not a period of time I think anyone dreams about. Children do not fall asleep to thrilling stories of dad staining the deck, or of him waiting for the water to heat up to help us scrape the dried macaroni from a dish left out overnight. Still, I’ve found myself enjoying it, or at least figured out how to not let it beat me. There is a rhythm and a purpose to a family, a business that hums through the days like a current. I’m often tired, but I’ve found that tiredness is often just the cost of being present. I’ve struggled a lot with depression in my life, and I can say there are worse things than being present.

One of the things I’ve realized only just recently is that, while my daily routine offers very little free time for anything, let alone three hours per day to watch baseball, I can get by okay by just noting that things are changing. We are in debt, with a mortgage, car payment, and student loans still left to pay. Many days it feels as though our top speed is about five miles an hour slower than the world requires of us. I’ve decided that’s okay. My speed is my speed. We’ll go as hard as we can, and make do as best we can.

The Mariners – that baseball team I don’t have time for – are 7-1. They’re supposed to be bad this year. PECOTA says so. The media says so. Hell, even the team’s own general manager says so. The bullpen is one of the worst collection of arms I’ve ever seen in the majors, they haven’t yet gone one game without committing an error (they made four Monday night), and the lion’s share of its big league talent is depended on to produce to maximize its trade value, rather than for wins.

Still, the Mariners are 7-1 for the first time in franchise history. They lead the league in home runs. They have spent a week collectively hitting like nine Mike Trouts. The bullpen, pitching, and defense, have done just enough. It will eventually come crashing down. Everything in life fails, and the Mariners are baseball’s best teachers of that truism. But, for now, they are 7-1. Tomorrow’s game will be hard. The game after that too. That’s okay, I think. For now, at least for a bit longer, that’s okay. 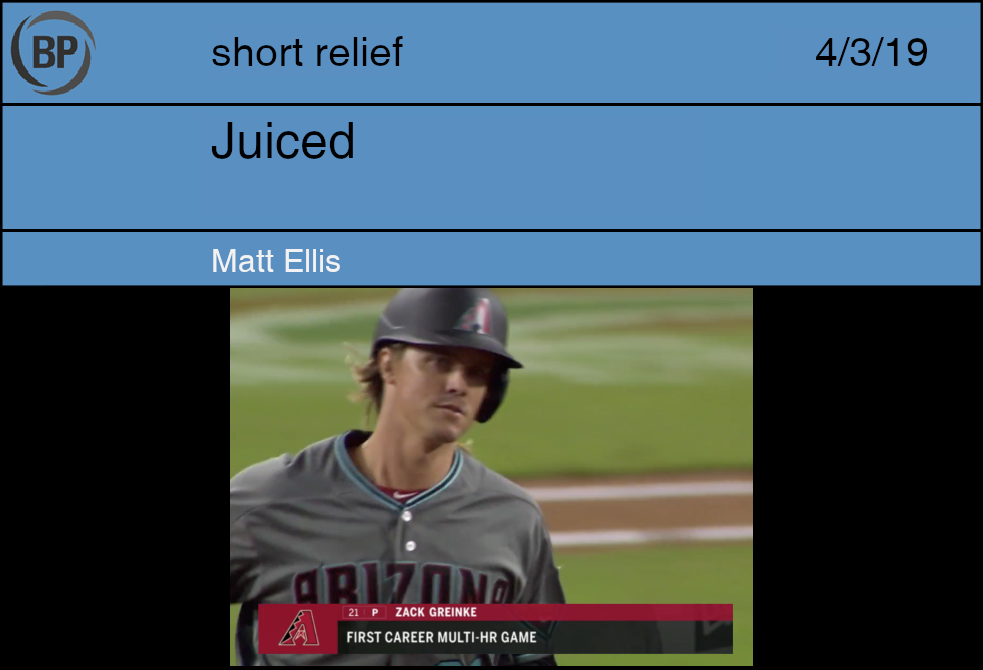 The ball is juiced.

That’s what they say, anyway. Who knows if it’s true. Since Opening Day there have been approximately seven thousand home runs hit by everyone from Khris Davis and Paul Goldschmidt to whatever a Tim Beckham is (not the soccer one). It’s popped up high and wide, and in Arizona’s first game, Zack Greinke – a reliable computer pitcher if there ever was one – gave up four to the Dodgers alone: a feat which, on the one hand, might be the result of an NL powerhouse coming into being. On the other hand, Los Angeles featured names like Austin Barnes and some folks recently off the injured list suddenly playing their minds off like it was the 1988 World Series, as if their names were Kirk and Gibson. (Not to mention that Greinke got revenge with two home runs of his own last night.)

The first inclination something was wrong came last year when researchers from Washington State University determined that, indeed, the ball was somehow different just enough to qualify as doctored. Just 15 years earlier, while banks were busy deregulating home loans, baseball had been summoned to a special session of congress to get yelled at because they needed to be told to make Jose Canseco’s arms smaller. Nevertheless, the crisis sat gestating for a few years, and now the balls fly high and the profits come rolling in.

It’s kind of irritating. I think often of what my uncle, Gene Ghekiere from Great Falls, Montana, an Atlanta Braves fan and mass collector of baseball cards from the 1930s-60s, would say about this development that has changed the game so much from the one he recognized as a child of postwar America. That is a trap of course: the very reason the ball is being doctored is because the powers that be want it to be like it was Back Then – a time when the mound was lowered five inches when pitchers began to dominate. They want fans to give the same kind of affective relationship they did then, now.

I was thinking about that today, and I realized that we still don’t quite know what we mean when we say the ball is “juiced.” Sure, they might have lowered the seams a bit, or at the most egregious, changed something about its core (this is doubtful, as it would be much easier to track). Nevertheless, I think we should ask not simply why the ball is being “juiced” (because we know why: dingers = profit) but if it’s possible to “juice” only one thing in the game at a given moment.

What if “juicing” the ball also required “juicing” the game, itself? What if a governing body such as the league was given the power to fundamentally change the rules of the game from the inside out–and somehow only chose to change the shape of the ball by .00000000014%? That seems rather unlikely.

I wonder, then, if we’re really being honest with ourselves when we say that the worst thing that could happen is the ball keeps flying, flying and that Brendan Ryan missed a stable career by two seasons. I wonder.

I wonder, then, how long all these rebuilds are really going to take, after all. 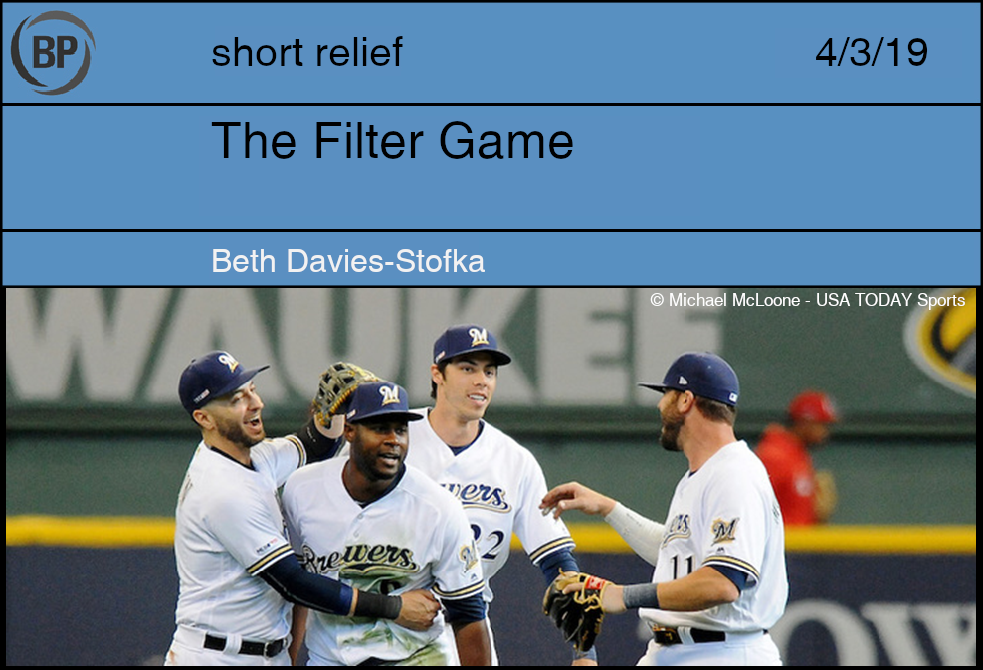 I play a game that I like to call the Filter Game. Next time you’re out and about, maybe in the ballpark or at a favorite bar/café/eatery, look around and filter for anything yellow. Then, filter for triangles. Find every triangle in sight. Next, filter for anything in cursive script. Depending on where you are, you might have to focus really hard for cursive. Finally, return to looking at things the way you always do. Suddenly, you see so much more. Temporarily applying extremely narrow filters results in a huge upgrade to how we see the world.

This tactic came in handy when baseball resumed in full on March 28. The return of baseball is a really big deal, and now that I can choose any game, it’s also daunting. What will I choose? What if I make bad choices? What if I watch a totally boring game while something amazing unfolds elsewhere? What if I change the channel and miss something really cool? I can’t handle the abundance!

Well, there’s no use getting hung up on things you might miss, because that will give you vapor lock. Instead, I decided to play the Filter Game. I decided to spend Opening Day intensely focused on some of 2018’s highest-achieving players, a baseball version of filtering for triangles. I chose Max Scherzer’s pitching, Matt Chapman’s defense, Christian Yelich’s plate appearances, and Mookie Betts’ everything.

The results exceeded all my expectations. I saw Scherzer strike out 12, Chapman take part in two double plays, Yelich hit a home run, and Betts hit .600 on the day while keeping right field almost spotless. But that wasn’t all: I also saw a near-historic Opening Day pitcher’s duel when deGrom matched Scherzer with 10 whiffs of his own. I saw the A’s shut out the Angels in two hours and 18 minutes. I saw the Mariners smash expectations by hitting five home runs against Red Sox pitching and holding a three-and-a-half hour party in the dugout.

And while I didn’t see the Dodgers hit eight home runs, I saw Lorenzo Cain rob José Martínez of a game-tying home run in the bottom of the ninth. Game over, Cain jumped up and down like a man on a pogo stick, exuberant, laughing for joy, and I was laughing and jumping with him. I am ready for more. Now, after removing that four-player filter to fully engage the season, I am looking at baseball with surprise and joy. It’s a huge upgrade. I won the Filter Game.