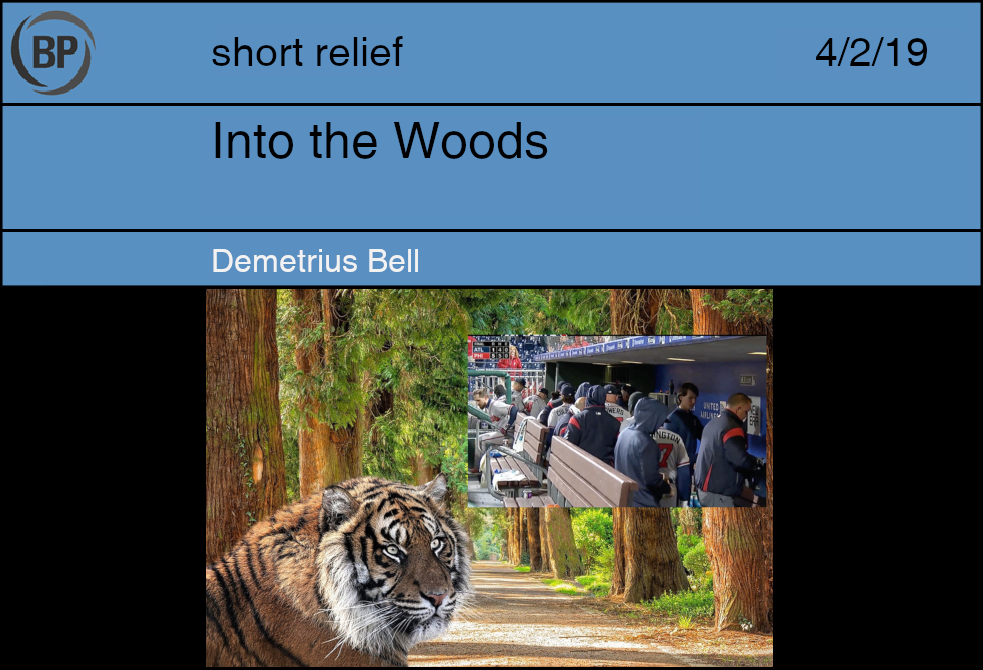 The Braves got battered by the Phillies this past Sunday night. The game capped off a series sweep for Philadelphia where everything that could possibly go right for them, did. It was also a series that confirmed all of the concerns that Braves fans had for their team throughout the entire offseason. Atlanta’s pitching staff had a problem with walks last season and the same problem reared its ugly head to start the 2019 season because the same cast of characters from 2018 returned.

As fans, there’s a sense of hopelessness in that you can’t affect what’s happening on the field. For a lot of us, all you can really do is yell into the void by using your fingers to send out tweets voicing your frustrations. That’s where Braves fans were at after just the first three games of the season, as they watched their team’s Achilles heel get exposed at such an early point. When you’re in doubt, you send angry tweets. Failing that, you change your avatar to a picture of Tiger Woods smiling awkwardly as the pain pierces through his eyes.

Braves fans on Twitter chose to do the latter. Almost immediately after Hector Neris got Johan Camargo to fly out to end the game, the image of the legendary golfer began to spread like wildfire throughout every corner of Braves Twitter. By 11:20 PM, AJC Braves beat writer Gabe Burns noticed the meme and things just snowballed from there. By midnight, Craig Mish had joined what was simply known as “The Movement.” Mish changing his avi to Tiger Woods coincided with the vast majority of Braves fans doing the same thing. The avalanche was underway.

So, why did Tiger Woods suddenly become a deity for Braves Twitter? You can blame a couple of bloggers at SB Nation’s Talking Chop for kicking this off. An inside joke that had been a running gag for years was suddenly thrust into the spotlight and used as an image of solidarity for fans who were bitterly disappointed with the offseason that the team just had. This was more than just a funny picture of Tiger Woods from a party a few years ago. This had suddenly become a striking avatar of baseball protest.

It’s also proof that the internet is such a deeply weird place. In the blink of an eye, it can go from being a house of horrors where hot takes rule the day to being a place where you can laugh with other fans about your favorite team’s woes while sharing the same avi of one of the best golfers of all time. We all process disappointment in different ways and Braves Twitter found a uniquely different way to process their emotions. For all we know, this avatar could end up being considered a good luck charm. That might end up being the case after last night. You can’t predict baseball, and you can’t predict the internet either. 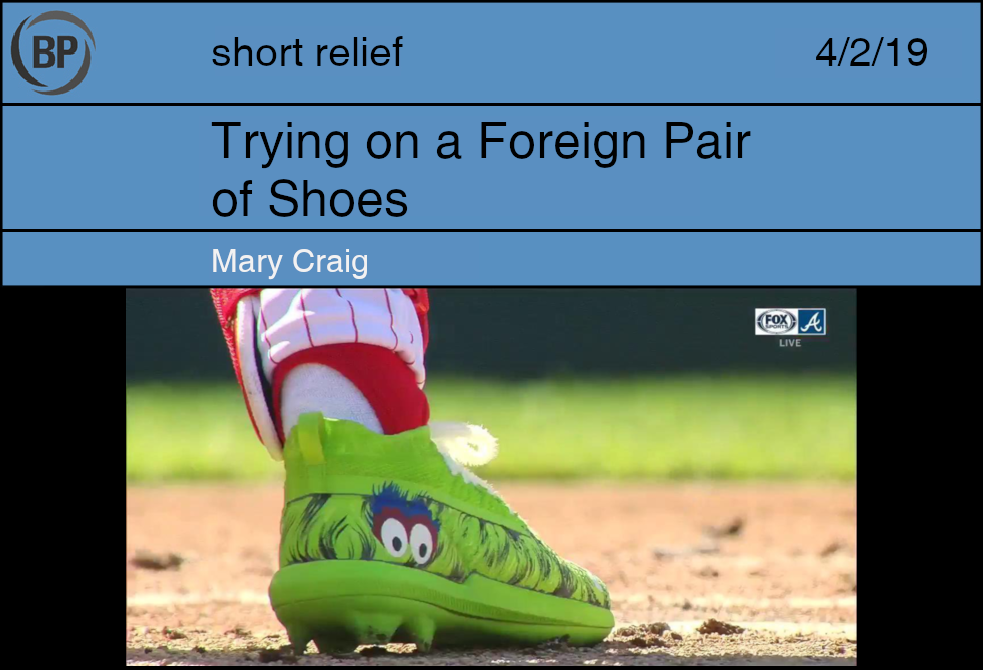 If you’ve been on this planet long enough to have attended a team-building event, you’ve heard some variation of the saying, “You can’t understand someone until you’ve walked a mile in their shoes.” Like most idioms, its origin is murky, as is the origin of its entrance into my life. It’s also been around long enough that it’s been misquoted, misapplied, and generally misunderstood by thousands of self-help gurus across the country. This weekend, Bryce Harper and the Phillie Phanatic took it to a new literal level: sticking their feet into each other’s plastic-y, fabric-y heads.

But just what do Harper and the Phanatic need to learn from one another? On the surface, they’re very similar. They’re both beloved baseball figures who aren’t afraid to cast themselves as the villain from time to time. They both set out to breathe fresh air into an oft-archaic sport: the Phanatic replacing a pair of siblings dressed in revolutionary war-era garb and Harper brazenly opposing the white, goateed “play the right way” crowd. They were both brought to Philadelphia to attract more fans to the ballpark. They’re both much better off with thick, face-framing eyebrows. If Harper were to dye his hair green, they’d be borderline indistinguishable.

Perhaps the Phanatic could experience what it’s like to be better compensated for his skills or learn about how close he comes to engaging with the human experience. Maybe Harper could find freedom in stepping outside of himself for a moment, something he’s been unable to do for over a decade. Maybe in finding themselves in the other, they could obtain the complete friendship about which Aristotle writes.

Or maybe they learned nothing, ending their journey precisely where it began. They spent every one of those 5,280 feet yearning for the comfort of their own shoes, walking away only with an exaggerated understanding of their differences. Maybe a mile isn’t long enough to get to know somebody else, let alone yourself.

It may take thousands of miles and hundreds of misapplications over thirteen years to break in an alien pair of shoes. Luckily, Harper’s got the time. 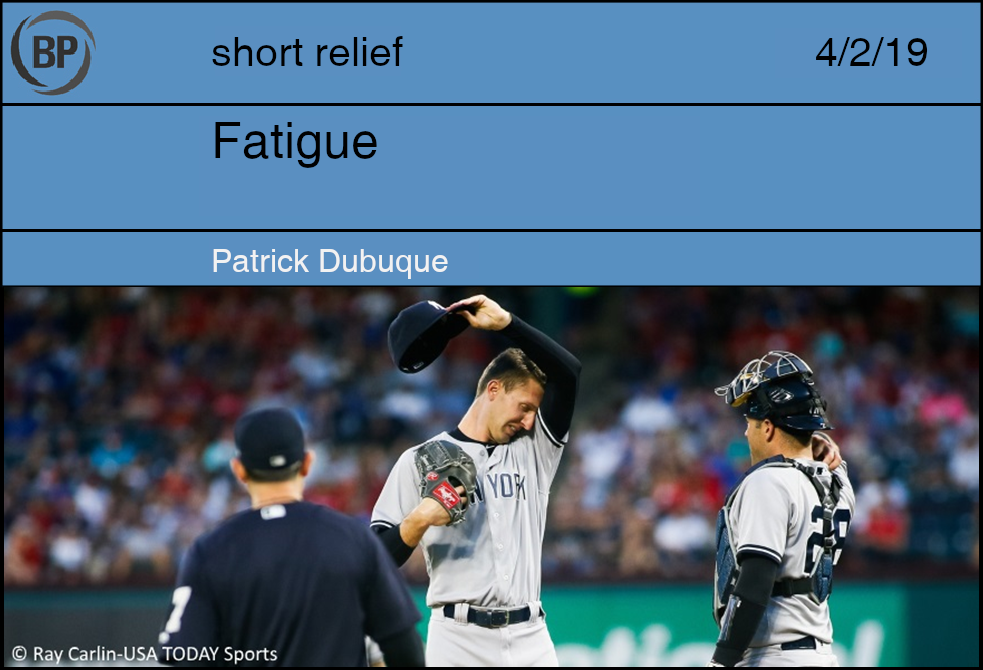 In the air I am still me, as I leap and chase my son around the playground equipment. It’s not until I hit the woodchip turf that I feel my age, the duration of the bending of my knees creating an asynchronicity with my brain. I throw pick up pinecones and throw them against the fence, and my pitching motion is every bit the smooth delivery of childhood; I don’t see how the leg no longer kicks all the way up, or that my arm angle has dropped to near sidearm. No one really feels old, physically, until the moment they’re forced to remember.

But I do feel old all the time, just a different type of old. Especially late at night, when I brush the kid’s teeth and the kid keeps putting up her hand to signal me to stop because the American Dental Association never factored in the issue that my daughter can’t go two full minutes of toothbrushing without talking. And I tap into that parental reserve of patience and energy and know, even as I reach, that it’s empty. Or after it’s finished, and the kids are asleep, and I head downstairs to edit, or wake up from five hours’ sleep to go back to work, repeating groggily I can’t keep this up, and then keeping it up, because routine is the strongest force on earth, stronger than love, stronger than despair.

Growing old, more than anything else, means growing tired. Except in baseball, where teams have slowly discovered over time that being tired is a bad thing, athletically speaking, and have done everything they can to scrub it from the game. Teams have grown judicious in expending and marshaling their energy: concentrating the innings and arm strength of starting pitchers into smaller doses, parading fresh-armed relievers inning after inning, tossing backup catchers out to absorb the mandated work of a blowout loss.

I understand the drive for teams to steer this way, but I also feel the urge to stop them, to wish for rules and constraints that push the sport back to an era of sweat-stained caps, deep breaths, hands on knees. I’m drawn to a baseball where stamina is almost as valuable as talent, where the players are weary and imperfect and human. I don’t know how to make it that way, and I don’t think it ever will be; such a thing is a barrier to the flashes of absolute perfection and youth and energy that draw so many to the game. But I think back to those pitchers, weighing and conserving themselves, reaching down for just a little more when they know they’re empty. There has to be a greatness buried in that not-quite-greatness, I hope.