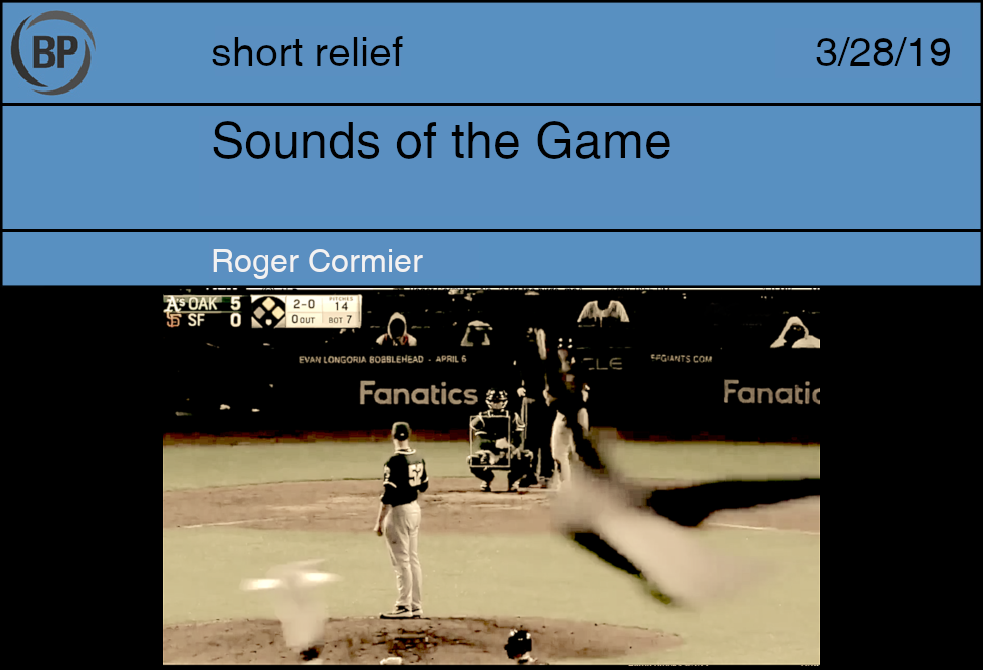 Call me a nut, because what I missed most of all were the sounds of baseball. The crack of the bat. The ground rules to enjoying a game, as explained by the hometown players so you know they are not making stuff up. An echoed Deborah Kerr asking “Do you think it will ever take the place of night baseball?” as the roof closes (night starts only). The buzzed fan imploring the player to “go.” The clarion calls to give fans license to insist the home team “charges.” The mocking of the visiting batter who just struck out with the sound of the ghost of the founder of the local electronics store conglomerate whistling in the void, or the immediate noise heard after Pacman’s quick yet brutal death, or the sound of the biggest embarrassment of your life as documented by The Price is Right cameras. Eve Babitz reciting her “Dodger Stadium” to a contest winner. Yello’s masterpiece. A salute to the armed forces. A screening of the wackiest of bloopers. One seagull yapping. A fan asking what the athlete was trying to do, exactly. The cowbellers, the airhorners, the vuvuzela folk. Two seagulls crying. The chorus to “Lithium”. Jack White and his seven nation army. Boos towards the Kiss Cam. Four seagulls chanting. Hot dogs/Crackerjacks/Beer/Prop bets heeeere! Ten seagulls signaling. A fist fight over whether nine or ten batters is “batting around”. Twenty seven seagulls singing. Pathetic human screaming. One hundred seagulls chanting. One thousand seagulls barking orders. Pathetic human pleas. “Sweet Caroline”. Two thousand seagulls yelling. Bum, bum, bum. Mewing, keowing, yawning, leaving. So good, so good. Piped in hand claps. Overheard: “Some of those clappers are dead now, you know.” Rami Malek stomping and clapping to “We Will Rock You.” Roars of approval for the 6-4-3 double play that made trusted family tailors openly weep. Bathroom line calculus determined out loud. Limbs popping during the seventh inning stretch. Eighth inning questions of whether to beat the dreaded traffic. Ninth inning groaning. Ninth inning cheering. Thousands upon thousands of feet hitting the floor, pointed towards the escalators. Explanations on where the home team could have improved (win or lose.) One seagull singing. 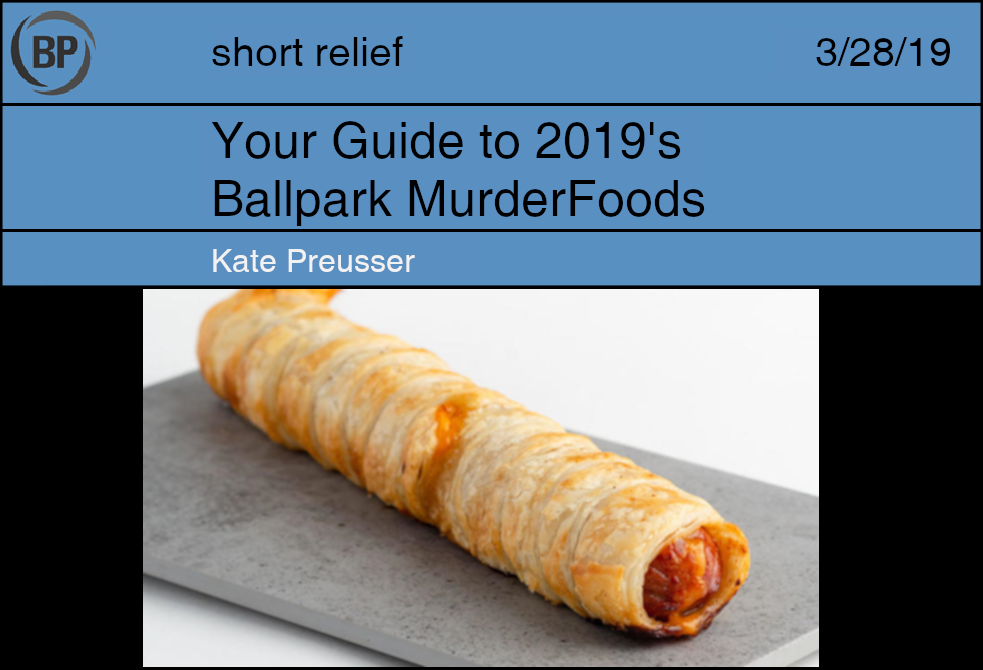 After years of a grim game of gastrointestinal one-upmanship at America’s ballparks, it seems the pendulum has finally swung back towards offerings fit for the typical number and constitution of human stomachs. Some parks, like T-Mobile in Seattle or Oracle Park in San Francisco, are even focusing more on options including locally-sourced ingredients and plant-based products that are both better for the environment and our fragile mortal bodies. And other parks have looked at that, wiped their sweaty brows with an American flag, and vowed to press ever-deeper into the slums of Flavortown, because they can take our straws, but they can never take our freedom to consume calories equivalent to the GDP of a small country in one day. 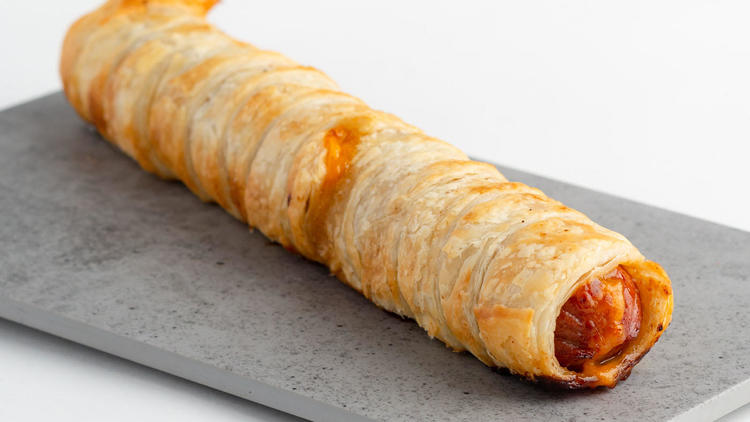 Braves, you cannot fool me with your entreaties of “puff pastry” and “bacon jam.” This is straight out of my mom’s 1992 Pillsbury Bake-Off Favorite Brands pamphlet. I bet that cheddar cheese is straight Velveeta. Everyone knows these are called Mummy Dogs, you make a face on them out of dollops of mustard, and they belong on an orange plastic tablecloth in between a bowl of grape eyeballs and spaghetti brains. 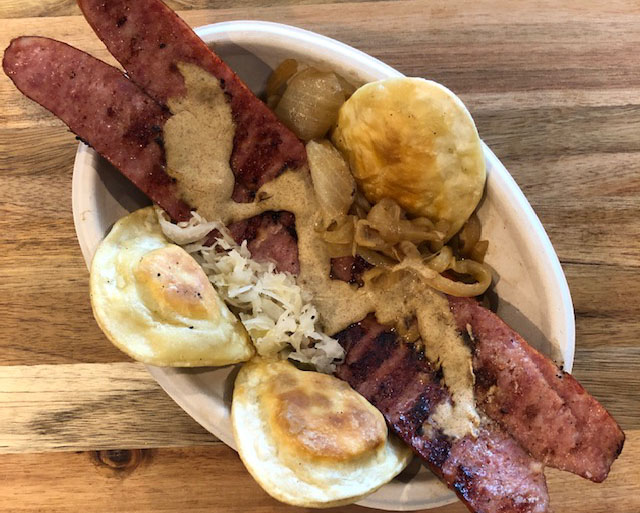 First of all, no. I reject on principle this overlong butterflied kielbasa laid bare before a bachelor party even with its sad half-moon pierogi, the fluff of yellow snow sauerkraut, and sticky, soggy onion. You cannot just put a variety of items with no internal consistency in the same space and call it a platter, White Sox. How does one wrangle the sausage while also attempting to quarter what is assuredly the world’s densest pierogi? This is the equivalent of trying to give someone a single item like a candle or bath salts, then panicking that it seems chintzy and amending the gift with bath salts or a candle, then adding a decorative soap you have had in your house since the Clinton administration. 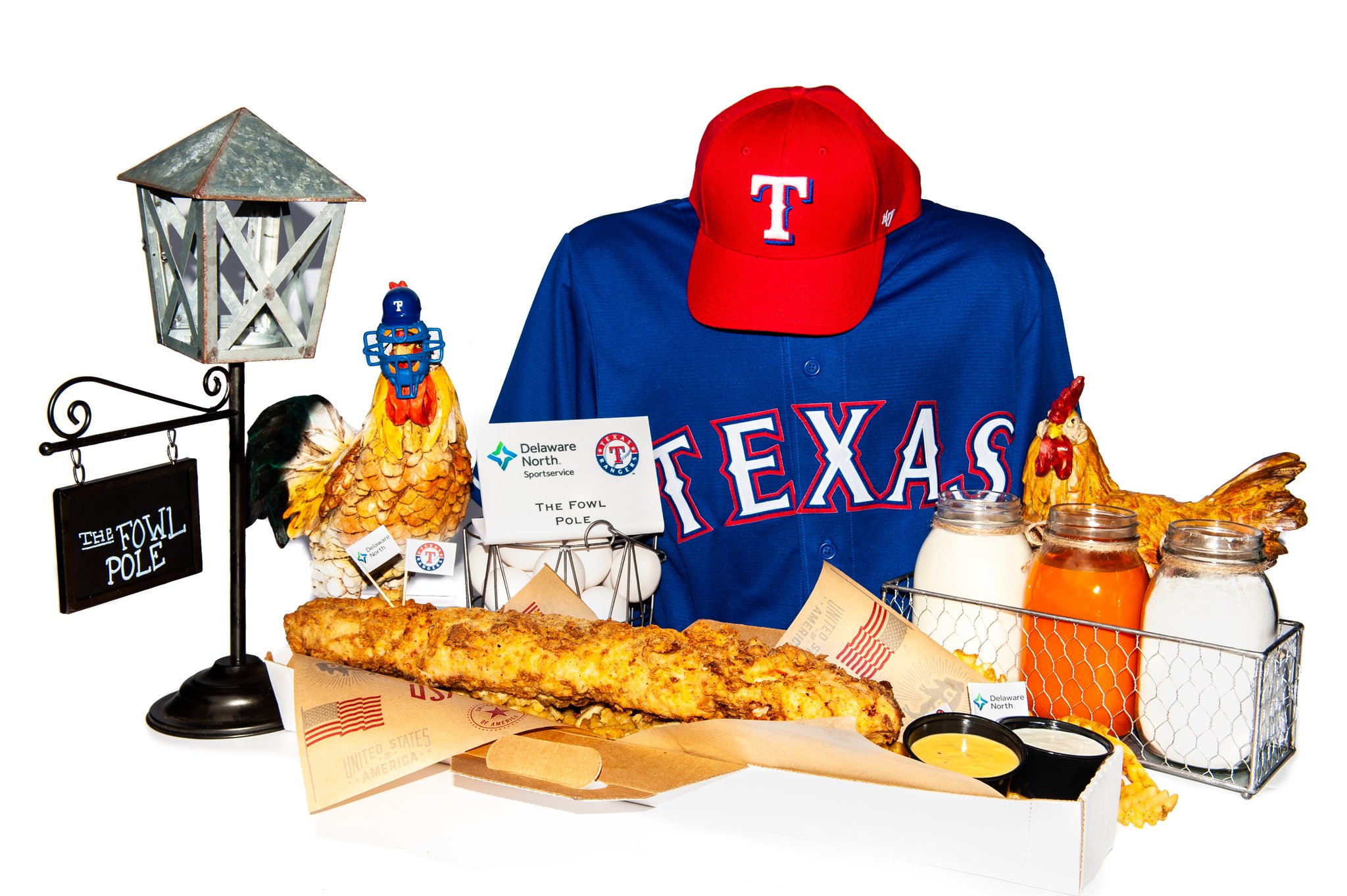 It must be so exhausting to be a Texan, always having to prove it’s bigger there and whatnot. This affront to God and nature is a two-pound chicken tender that retails for close to thirty dollars, and, like a top-shelf Scotch or beloved childhood doll, comes with its own carrying case and what appears to be an entire mason jar full of dipping sauce. I’m not sure exactly what’s happening with the staging of this promo photo, but can only assume there has been some kind of Animal Farm-style takeover that’s left poor Farmer Rangers Fan headless and armless, with the lamppost a reminder of the industrial age that’s now been overthrown in favor of an agrarian-led, poultry-first society. Four legs may be better than two legs, but two-pound tenders will rule them all. 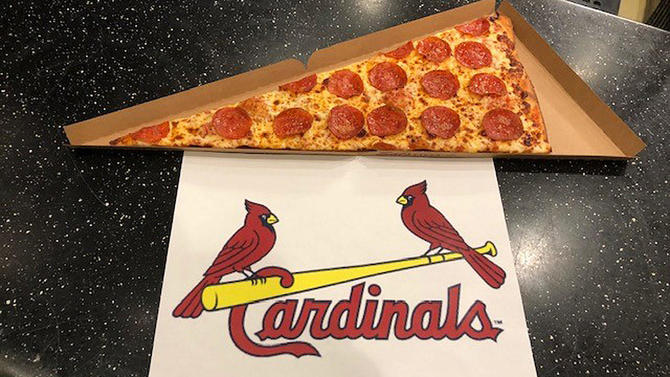 Midwesterners believe in plainspeak and plain food, and there’s no wink-nudge name here: The pizza is big. It’s Big Pizza. In an elementary school in Kimmswick, Big Pizza sits between Skinny Ray and The Gunnery Boy and isn’t allowed to take the class hamster home because of last year’s incident. Sure, Big Pizza looks like it belongs nowhere else than in the hands of an ten-foot cartoon rat or possibly a Ninja Turtle parade balloon, but no one says that, such things are not spoken of. It’s Big Pizza, and that’s enough. 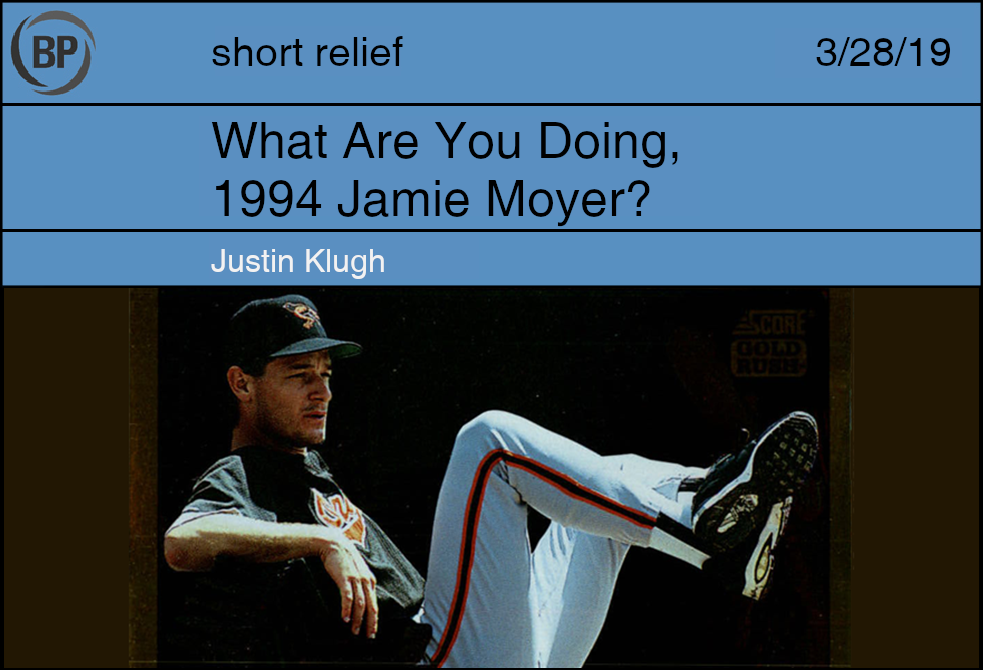 A shutterbug for a wire service was sitting there in the sun, getting full practice shots in Sarasota, when he turned to his left and there you were, kicking out the pillars of society. What are you rebelling against? All that is decent?

What could possibly have made Jamie Moyer this relaxed in 1994? Well, he was coming off one of his finer early seasons, 1993, in which he started the year in the minor leagues with Rochester before getting called up at the end of May. He posted a cool-looking 3.43 ERA in 25 games after that, throwing up some of the Jamie Moyer-y stats you’ve ever seen: 2.37 K/BB, 5.3 K/9. The Baltimore Sun said he “Must have pinpoint control to be successful.” Let me ask you sometime, The Sun… does that look like the cool squint of a man who’s not in control?

Of course it is. They don’t let you throw your cleats up on the fence for throwing less than three complete games in most of a season. Moyer was so pretty okay in 1993 that people couldn’t contain their polite applause, giving him standing ovations that season and considering him one of the game’s unquestionably premiere back-of-the-rotation starters.

So, what’s Moyer looking so cool about in this photo? He owns this league. Call it guile, call it control, call it an 85 m.p.h. heater, Moyer had nothing to worry about after putting up those numbers. All he had to do was go out there and pitch and assume everything was going to be exactly the same. Until the unthinkable happened.

Everything in baseball in 1994 just went sideways, anybody could see that. For the first and only time ever, Ken Griffey, Jr. hit a home run off Moyer–”well beyond the center-field wall” of the Kingdome, said Tom Keegan of the Sun. Moyer underwent an uncharacteristic struggle with his control, likely having to travel within his own mind and do battle with some sort of shadow version of himself. In the first inning, American League batters were hammering him with a .522 BA; through a stretch of four midsummer starts, Moyer had a first inning ERA over 22.00. Moyer told reporters he was switching up the timing of his delivery, when it started, when it ended.  Manager Johnny Oates suggested Moyer change-up what he ate for breakfast. Then, baseball broke and needed a drug-fueled tater rampage to fix itself.

We don’t know this Jamie Moyer anymore. We have tan, ponytailed, seen-some-shit Jamie Moyer, and he is the natural progression of the Jamie Moyer seen in this image, photographed in a moment of utter mental dominance, taking in his fleeting glory–as all glory is–and knowing it can’t last forever–because nothing does–staring at the infield, his whole life ahead of him, thinking, “I bet I’d look good with a ponytail.”

You need to be logged in to comment. Login or Subscribe
Llarry
Isn't "olfactory" scent, not sound? I think you meant "Auditory".
Reply to Llarry
Llarry
Still, a great description of the sounds of the ballpark.
Reply to Llarry