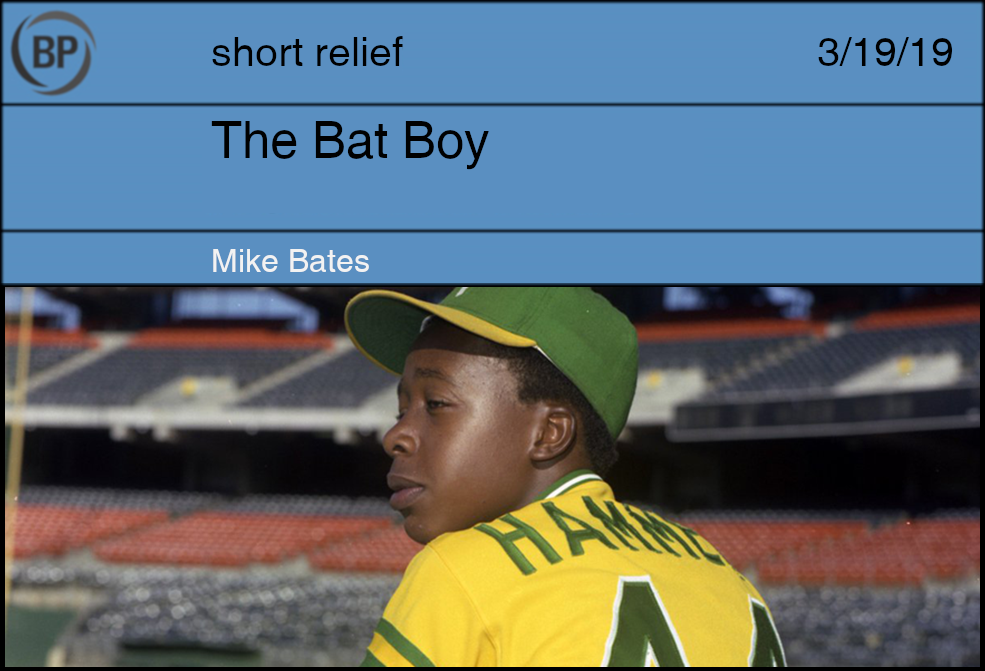 Because we are, all of us, such right-thinking people, we concern ourselves very greatly with the plight of the young men who are currently being exploited in the minor leagues for less than the minimum wage and being paid far below the poverty line. Those who are being manipulated and lied about and cheated out of their rightful roster spots.

We also spare a thought for the interns who slave away in baseball ops departments, hoping for a way in to gainful employment while teams take advantage of their free or vastly-undercompensated labor. We mourn for those who miss out on the chance to work in the game because they cannot afford to.

And we pretend that this is a new development in the game when, friends, we know that it is not. Baseball was built on the reserve clause, which left players without any kind of leverage, and ensured they’d be underpaid when they could not organize and resist. And teams have always looked for ways to get away with paying their employees less than their labor is worth to them.

As a case in point, I’ll point you in the direction of Oakland in 1972. There, we would find one Stanley Burrell, dancing outside of the Oakland Coliseum, much to the delight of miserly Athletics owner Charlie Finley, a cartoon of a man so ridiculous that one would be forced to invent him for comic purposes if he had not already done us the courtesy of existing.

Burrell was 10 years old and, quite taken with the precocious boy who he thought looked like Hank Aaron, Finley invited him to become Oakland’s batboy. This, in and of itself, would not be all that remarkable a story, except that it continues. Burrell spent years as Oakland’s batboy, through the rest of their dynasty and beyond. He also worked his way up through the shoestring organization, becoming something of a “go-fer” on Finley’s behalf, and reportedly a spy who would feed the owner tidbits and rumors from the clubhouse. What is clear is that Finley began to rely on him more and more, and doted on him.

And then, when Burrell was 16, according to Scott Ostler of the Los Angeles Times, “Finley made him a vice president, though his duties were somewhat nebulous.”

I don’t know which is the actual truth. I don’t have access to Oakland’s personnel records, though my dream is to someday get that chance. Is it possible Burrell was an executive? I mean, the A’s were weird. Running the club on a shoestring budget, Finley never really had more than a handful of employees at a time. By 1980, his team had just nine full-time employees in the front office. And Burrell was tasked with relaying his boss’s messages and orders to the clubhouse. The idea that Finley might have, on a whim, given this kid a title and key to the washroom isn’t far-fetched.

Even if he didn’t though, it seems abundantly clear that Finley was leaning on the young man so heavily because he was unwilling to actually hire and pay an adult to perform these tasks. As much as he may have loved Burrell personally, Finley was exploiting him. But such is the way in Major League Baseball.

Anyway, as many of you know, the second thing that makes this story remarkable is what happened to young Burrell after leaving the A’s at the age of 18. After a stint in the Navy, he would reemerge some years later in an exceptionally poofy pair of pantaloons, as many of you know, honoring his nickname with the A’s, Hammer, and becoming one of the most successful rappers of the early ‘90s. His story reminds us of all that we are not allowed to touch, including the industry’s unfortunate practices regarding its most vulnerable workers. 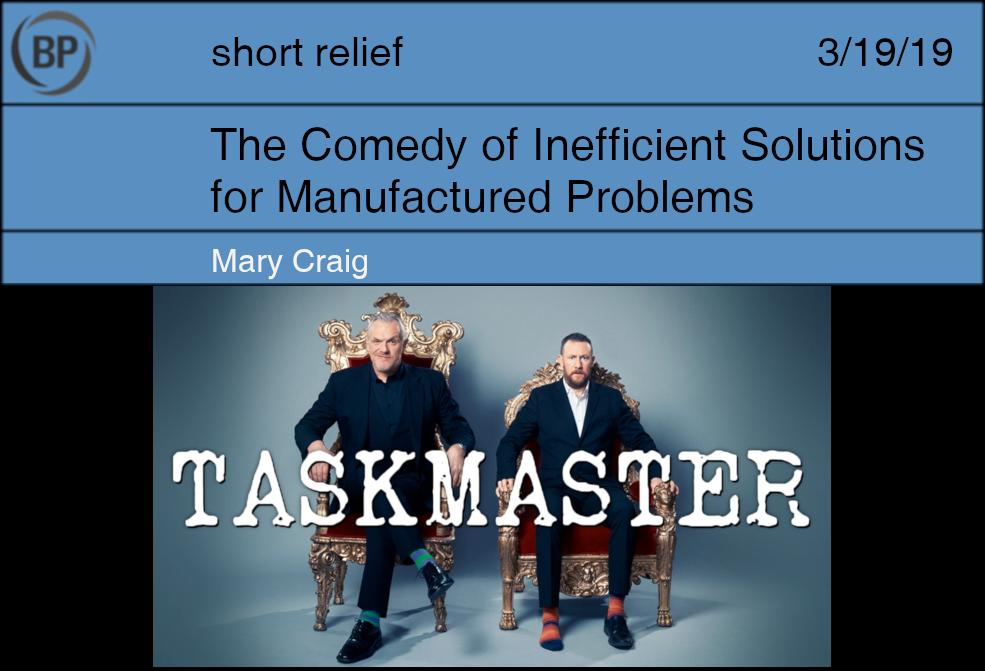 I’m a huge fan of British panel shows. Watching them is my second-favorite way to relax, behind watching baseball. If you’re not familiar with them, panel shows involve a group of celebrities, typically comedians, engaging in comedic banter with one another while attempting to gain points in various ways by engaging with nonsensical scenarios, hypothetical and real. Occasionally, versions of UK panel shows make their way to the US where they are absolutely butchered, resulting in their being cancelled after one miserable season.

One such panel show that recently made its way “across the pond” is Taskmaster. The show involves five celebrities competing to complete a series of bizarre tasks designed to challenge them creatively, logically, and physically. They then appear in front of a live audience in order to be judged by the Taskmaster on their ability to complete each task.

Each task generally begins with a simple premise, like getting a ball into a hole or making the highest tower out of boxes. Added to these tasks are various impediments: time constraints, limited materials with which to work, bizarre physical boundaries, all designed to reward contestants for ingenuity and penalize for straightforwardness. As expected, these tasks produce results ranging from spectacular to comical to pathetic, illustrating the diversity of the human condition.

One of my favorite moments involved a task in which the contestants had to get a potato into a hole. Of course, the hole was surrounded by a green the contestants were not allowed to touch. The climax of the challenged occurred when one contestant, who was impossibly bad at nigh every single task, managed to get the potato into the hole in one single throw.

This unbelievable triumph was immediately, cruelly undercut by a closeup image of the contestant’s shoe grazing a millimeter of the green. He, who was in dire need of the points his potential victory would garner him, pleaded his case to the Taskmaster, who eventually decided to allow his fellow contestants to vote on whether he should be disqualified. They all pretended to deliberate among one another before unanimously voting in favor of disqualification. He never recovered. It made for fantastic television.

With the potential implementation of an electronic pitch communicator in order to solve the problem of sign stealing, MLB is well on its way to becoming another US adaptation of Taskmaster. 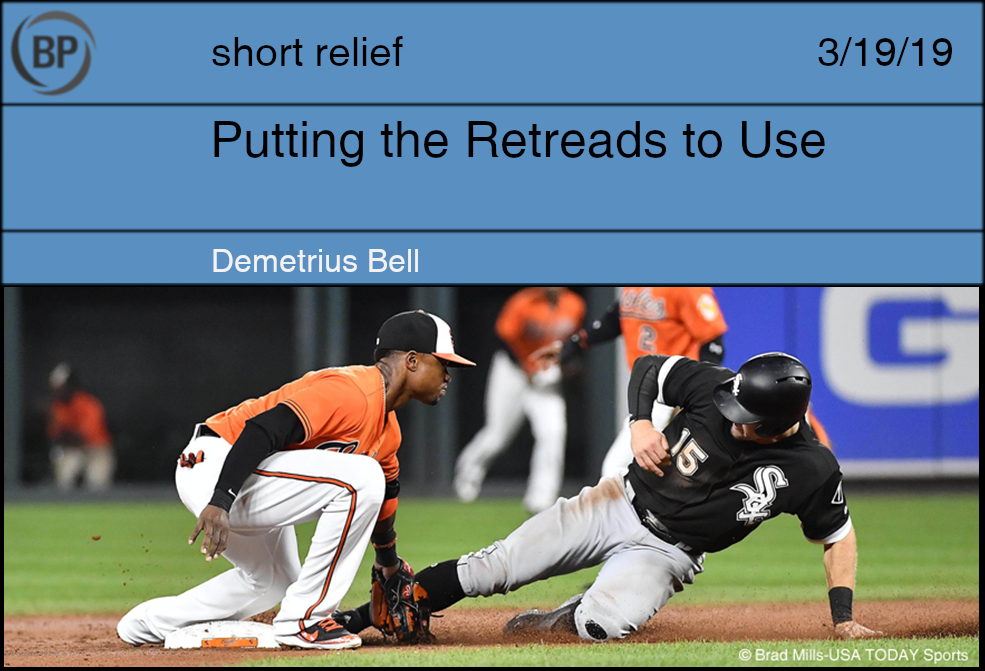 Baseball has its fair share of concerns at the moment, and not least of them is the fact that half the American League is just happy to show up. Plenty of organizations have decided to punt on a season or three, with the hopes of returning to prominence in a bigger and better fashion once they’ve accumulated talent either through the draft or by trading away their former stars.

As long as MLB doesn’t do much about it, this will continue to be a viable strategy for teams. However, I’ve come up with an admittedly wacky idea that would actually give these tanking teams something to play for at the end of the season: making them play for draft position in a season-ending single-elimination tournament.

The premise is simple: Since only four teams get into the divisional series each year, that leaves 11 teams on the outside looking in. Instead of telling those teams to clean out their lockers and go home, you’d give them a chance to salvage their season. They’d have to simply make their way through an 11-team, single-elimination tournament in their respective league in order to take on the winners of the bracket from the other league. Whoever wins the tournament gets to pick first overall in the next year’s draft and they get a trophy commemorating the tournament, possibly the size and shape of Rick Monday.

I’ll get the cons out of the way immediately, since I’ll be the first to admit that this is probably not the best idea in the world. For starters, this probably wouldn’t move the meter in terms of excitement. While this is a tournament, it’s still not “The Postseason.” There’s some undeniable NIT reek on this. The sporting culture in this country is very much “all or nothing,” so it would be hard to get people hyped up to put any effort or emotion into what amounts to a consolation prize. It would be a true test of professionalism to keep guys from spending this tournament playing Fortnite in the clubhouse in-between at-bats, or maybe even not stopping them.

The main positive would be that it would satiate the hardcore fans’ need for even more baseball. I couldn’t see any of the networks going for this, but I can easily envision MLB Network carrying this during an October weekend afternoon. Plus, while most teams and fanbases wouldn’t touch the “Consolation Cup” with a Louisville Slugger, you just know that there would be one franchise would would pride themselves on winning anything and getting the top pick. It would be worth it for some team, even if it would make Vince Lombardi roll over in his grave. It’s definitely October madness.