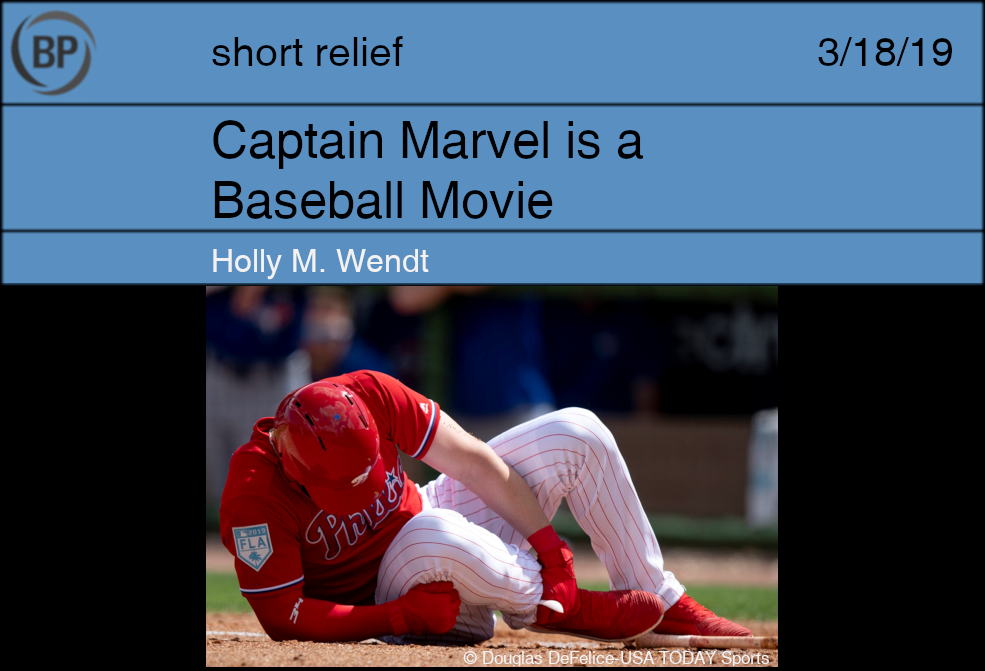 The latest installment in the Marvel Comics film universe, Captain Marvel, is a baseball movie. From the outside, of course, it doesn’t look like one. It looks like a movie in which a woman, Carol Danvers, who can fire photon blasts from her hands and fly alien space crafts with ease, does many of the things we have come to expect of our superheroes: she fights, she cares, she triumphs. She builds unlikely alliances; she gives us all the opportunity to learn about flerkens. There is, of course, quite a lot more to it, and though my treatment of the plot and action here is deliberately clipped to avoid spoilers for a film that’s only been out for 10 days, it’s a good addition to the MCU. If you’ve enjoyed the other movies in the series, you’ll like this one, I think. But the point of this is not to sell you on tickets. It’s to sell you on Captain Marvel as a baseball movie.

In a series of very brief flashbacks, the viewer sees young Carol Danvers standing in a batter’s box, the memory filtered slightly golden. A pitch comes in high and tight, clearly aimed for her ear. The memory is set in the early 80s. She’s the only girl on the field. Carol hits the deck, and of course she gets back up. The flashback reel continues: go-kart wrecks, bicycle mishaps, failures on a ropes course. Every time, she gets back up, and it’s a shorthand we recognize, one made easy by a lifetime of sports film montages.

But baseball works as another kind of shorthand in Captain Marvel. At another point in the film, a baseball appears in the most unlikely of places: on the floor of an invisible space station that could hold anything at all (and likely, the movie posits, danger). But there, in the world of the unfamiliar, the familiar. It’s a comfort even before its context reveals itself. The sudden shock of seeing a baseball—lying still, on the ground, so unexpected—jolts a tonal shift.

I keep looking for tonal shifts. In our world, it’s been another crushing week. An act of white nationalist terrorism killed 50 people—the total as of Saturday night—and injured thirty-some more in New Zealand. A tropical cyclone struck Mozambique, Zimbabwe, and South Africa, killing dozens and wreaking havoc on homes, power grids, infrastructure. There’s no end to the list of tragedies smaller and larger, individual and structural, and unlike in the Marvel Universe, there’s no set of superheroes who are going to magically set things to rights. Baseball isn’t going to save us, either. Baseball, most days, doesn’t even show many signs of wanting to save itself.

But on a cold afternoon, after a morning spent on some frustratingly futile work, I could watch Aaron Nola pitch in the kind of weather I’m still dreaming of. The Phillies didn’t do well, though, even by Spring Training standards: everything was human, flawed, fragile. Case in point: the Phillies lineup was already without Bryce Harper, thanks to an errant pitch on Friday, but the relief is that he was back on Sunday. The relief is that it isn’t worse. And I feel silly saying, in context, that the bruised-not-broken status of a millionaire’s foot makes me feel relief, but it does. Baseball, with all its shortcomings and my own wrapped in with them, is a familiar talisman, a reminder. For a little while, as the sun holds over some bad baseball, the tone shifts, and it helps me remember how to get up again. 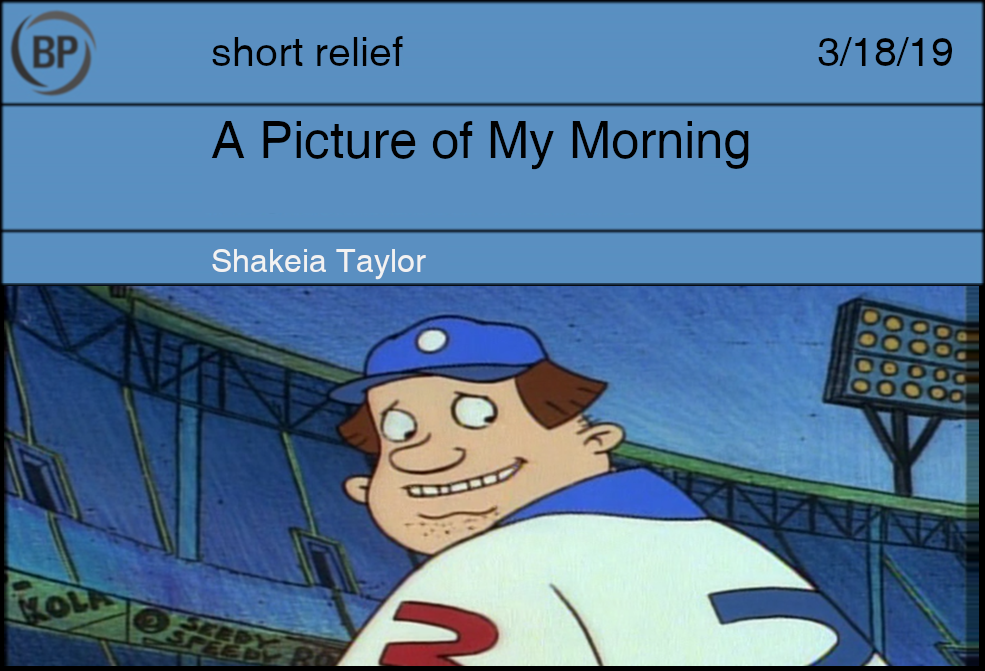 If there’s anything I love, it’s nostalgia. Records, physical copies of old books, film cameras, and 90s cartoons. Sometimes, when I can’t sleep, I hang out in the living room and watch reruns of Hey Arnold. It’s amazing the things you miss watching a show when you were kid. As an adult, I’ve noticed baseball was a recurring theme for Arnold and the gang.

In season 1, episode 5b titled “The Baseball”, Arnold’s favorite baseball player Mickey Kaline is retiring and Arnold wants to attend his last game. Like a true 90’s kid baseball fan, Arnold carries Mickey Kaline memorabilia in his backpack and can rattle off random facts about him at the drop of a dime. At the game, Arnold catches Mickey’s last home run ball. Later, he catches an interview on TV in which Kaline talks about his mixed emotions about never playing the game again, since baseball was all he ever wanted to do. Arnold, who cares deeply for his favorite player, starts to wish there was something he could do for Kaline to repay him for inspiring him. Arnold’s grandpa drives him to the ballpark where Kaline is standing alone and Arnold is able to give Mickey his homerun ball and they play a game of catch.

I’d imagine every baseball fan has a moment like this. Okay, not quite like this. I’m not sure how many of us have actually met our favorite players and played catch, but you get what I mean. A moment from youth that we cling to because it is everything we love about baseball. A moment we return to occasionally, that reminds us why we fell in love with the game.

My moment? I remember watching a game with my friend Michael, and seeing Ken Griffey Jr. and then we hear, “I live and die for Hip Hop/This is Hip Hop for today/I give props to hip-hop so Hip Hop hooray, hey, ho!” And we absolutely lose it. We had made it. Yes, we! Ken Griffey Jr. is my Mickey Kaline.

Nostalgia often seduces us to stick with baseball when we want to abandon it, or feel like it has abandoned us. Memories of being awakened by family members reacting to Mark McGwire going for the single season home run record, of watching grandmothers be the biggest fan we know, of your favorite team opening the season in a new ballpark. Or, if you’re me, memories of Naughty By Nature’s Hip Hop Hooray blasting in a game. 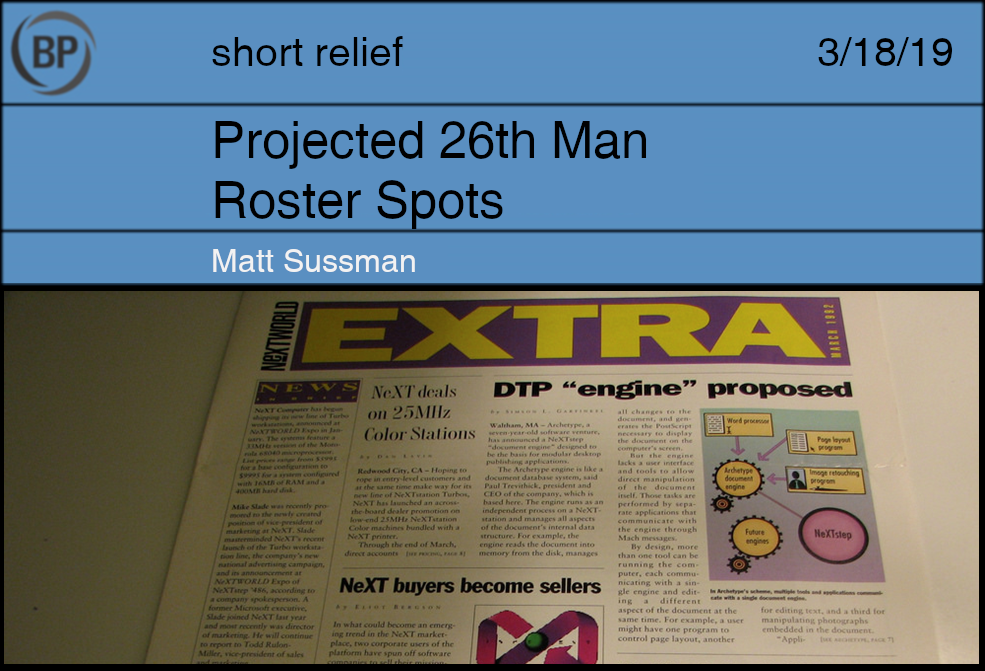 You heard the good news that they’re almost certainly going to add another major league roster position to every team. This news is of no consequence to the Vladimir Guerreros Junior or the Eloys Jimenez Regular because that 26th spot accrues major league service time. Rather, this is terrific news for everyone’s favorite baseball archetype, the hanger-on.

With that in mind, it’s not too early to predict who will be the 26th man on each team’s 2020 roster.

Arizona Diamondbacks: Most teams would go with a versatile superutility option, but the Diamondbacks are pretty well set in the infield and outfield. They could, however, use an extra pitcher. And one that scouts tell me the Diamondbacks have their eyes on is right-hander Oliver Drake. He would fit right into that bullpen.

Kansas City Royals: 2020 will still be a rebuilding year for this team, but with lots of speed and a budding rotation, they’ll be on track to contend sooner than you think. Still, it wouldn’t hurt to get bullpen depth, and I could see Oliver Drake getting the final roster spot for KC.

Milwaukee Brewers: It’s so refreshing to see a mid-market team actually try and contend. They’re going to stay in the thick of things for a while, and they already have one of the most dynamite lockdown bullpens. But for the stretch run, Oliver Drake will give them some extra innings to take the heat off the high-leverage guys.

Boston Red Sox: What do you do with an extra spot for the team that has everything? You stash Oliver Drake in the bullpen, of course.