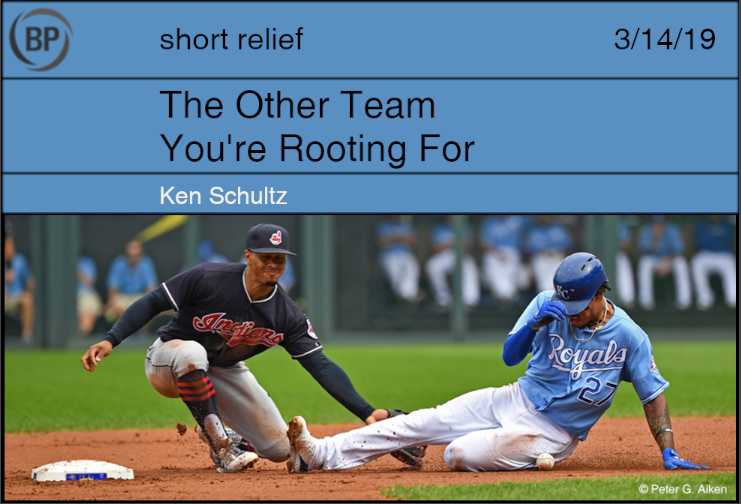 Thought experiment: if you could magically add 30 points of on base percentage to any team in baseball, who would you pick?

(Ordinarily, I’d add the caveat “excluding your favorite team” but let’s face it…if you’re an MLB fan during this execrable offseason, there’s a 95 percent chance the owner of your favorite team has decided to opt out of the concept of “making improvements” entirely. cc: tom@cubs.com)

For me, one squad immediately springs to mind above all others: the Kansas City Royals. Coming off a 104 loss campaign and still in the early stages of a rebuild (Dayton Moore Voice: “Don’t call it a rebuild, Ian Kennedy’s here for years!”), KC has decided to zig where all other 29 teams have zagged and built their roster around speed and… well… only speed.

While the rest of us were obsessing over the fates of Harper and Machado, Moore was stealthily adding Billy Hamilton and Terrance Gore to a team already boasting Whit Merrifield and Adalberto Mondesi, and thus stretching the word “boasting” so badly past the breaking point that Mets trainers just cleared it to throw 130 pitches.

In the middle of the Databall/Powerball era, Moore has decided to fight back by reconstructing the Whiteyball-era Cardinals. That is, if Whitey Herzog ever filled out a lineup where every spot in the batting order was taken by Joaquin Andujar.

Intellectually, I know that this will not work. Merrifield and Mondesi are projected to be be Good in 2019, with PECOTA bestowing 3.2 and 2.4 WARP on them respectively. But Hamilton’s career OBP is what would happen if Joey Votto went 0-for his next-2900. And it took Gore five years to finally see the Jumbotron congratulations from Herb Washington for passing him on the career hit list.

But just from the standpoint of liking baseball when it’s at its most fun, I can’t think of another team for whom I want a plan to work more. As soon as any of those four guys got on base, the opposing pitcher and catcher would go completely off their trolleys. After one game against the Royals, Yadier Molina would immediately land on the injured list with carpal tunnel due to repeatedly posting the word “disrespect” on his Instagram. Hell, Denny Matthews might even raise his voice.

If only there were a way to magically make OBP appear in the Mondesi, Hamilton, and Gore skillsets. Or turn them into Vince Coleman, Ozzie Smith, and Willie McGee by making a ritual sacrifice to the BABIP Gods. (Which is definitely what would happen if Mel Gibson pitched a Major League reboot.) The Royals even have Ryan O’Hearn and his .597 SLG playing the Jack Clark role.

Kansas City would instantly become the most must-see team in baseball. All that’s preventing it from happening is that it would be unprecedented in baseball history. Next thing you know, some team could win the World Series with Alcides Escobar as its leadoff hitter. 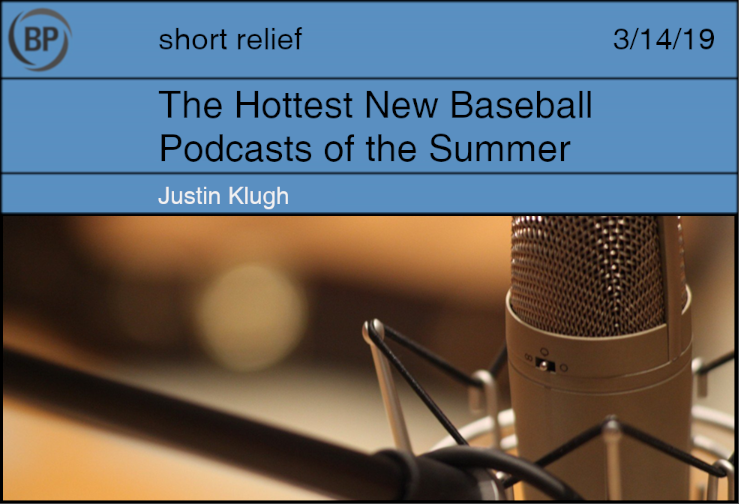 Baseball podcasts–everybody’s got one. In fact, you’re only ever a desk mic and a dream away from starting your own. But don’t do that. Instead, listen to one of these already established podcasts from the rich, unending world of baseball commentary, that will only be expanding in the summer to come!

Each episode of this glacially-paced breakdown of the baseball day’s events takes forever to end as the hosts make a point to speak slowly, softly, yet with pinpoint accuracy, on what’s happening in baseball. “An infuriating experience,” one listener wrote in the review section. “This podcast left me off-balance and out of sync with pretty much everything else I had to do that day.” In a confusing segment that further scuttles what the overall point is, the hosts speak at 5x speed to close out every episode just to, as they say, “change it up.”

Pop-up shops are all the rage downtown. You never know when your local abandoned shoe store is going to temporarily become cupcake factory for a weekend. In the spirit of transformation, The Pop-Up suddenly appears in your feed, often with the art and title of a now defunct podcast. Curious? Give it a listen, only to discover it’s not a new episode of the podcast it’s pretending at all; just a pair of hipster brothers who quit their jobs as high-paid corporate accountants just to roll the dice and try to make this wacky baseball podcast dream work out. If you like what you hear, don’t forget to follow them to their next location… wherever that may be!

Where’s the best place to talk baseball? Over the carcass of a still-warm deer, naturally. This podcast, hosted by an avid hunter about to skin his latest kill, is entirely whispered as the host attempts to not wake up his children, having retreated to his “hunting/podcasting shed,” which is the “only place he can get some peace and quiet.” Those of you who’ve heard episodes in which he has failed and the children have wandered into his his blood-drenched backyard structure in mid-recording know all too well what their shocked screams sound like. Their high-pitched shrieks, as the host tries desperately to calm them down, actually result in some of the livelier episodes. Come for the discussion of Jake Arrieta’s ground ball rate with a man holding a hunting knife; stay for the possibility that he may have irreversibly scarred his children.

You might think that nomadic travellers have bigger priorities than talking baseball–there’s always a moving boxcar to catch, a sheriff to evade, or a rat to roast on a tiny spit–but in this case, you’d be wronger than a hobo sleeping on the train tracks. MLB has, as we are all well aware, been desperately trying to break into the “problematic wanderer” demographic for years, and by making this podcast an official part of their catalog, they’ve taken a big step toward dominating the market. Each week, the host sets up shop in a different MLB stadium and talks loudly about the latest roster moves until security discovers him. Then, there’s everyone’s favorite segment, “a brief scuffle,” followed by an occasional chase, until the inevitable sound of him and his audio equipment hitting the pavement closes the show.

Everyone who has ever tried to start a baseball podcast will tell you–it’s not a routine play! It all comes down to that one moment, as it did on this podcast, where you have to shout at your oil tycoon father that you won’t become a heartless baron like him who drove your mother away until her “inexplicable” death from falling down an oil well. Instead of inheriting his industrial empire, you’ll say, you’re going to start a successful baseball podcast, and make your millions the old fashioned way! Little did you know that saying those words would drive your father away, too–and not just from you, but from the secret family he’d established in Idaho. Suddenly, it’s your responsibility to raise the six half-siblings you never knew existed, all while trying to record your baseball podcast! That’s the premise of this underground hit, in which every episode, talk of Christian Yelich returning to MVP form is intercut with the chaos of young children releasing a stable of prized greyhounds or derailing the tiny steam train that serves as a transit system for a massive estate property. Come for the baseball talk, stay for the absolute chaos caused by the fallout of a lecherous father’s sins! 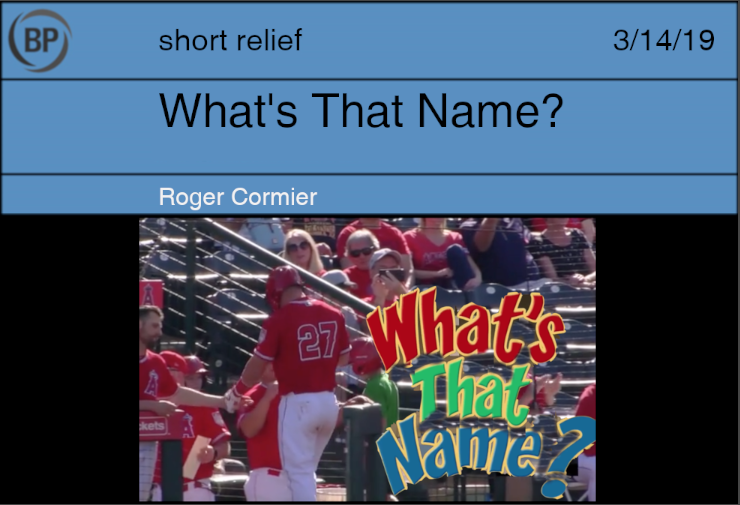 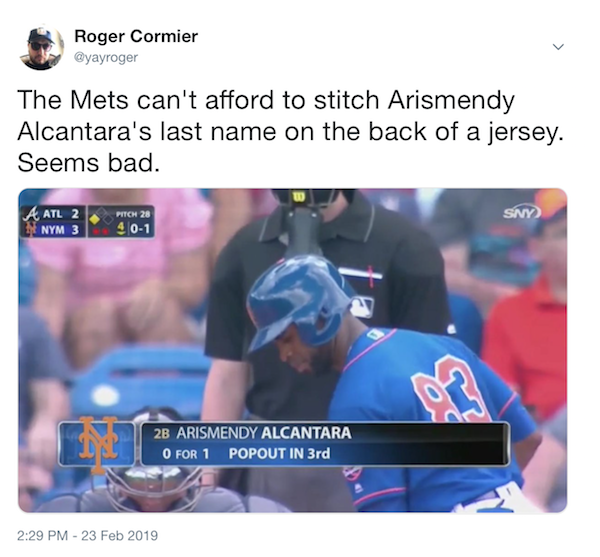 Not my best work. Man, I really hope nobody believes it to be my best work. One could say it was a cheap joke, if one finds puns about the Wilpons to be very funny.

I got a response to this tweet from a former Met.

Preston Wilson did not – and as of this writing still does not – follow me on Twitter. Why did he choose to reveal himself as a secret follower of mine for this one clarification?

What is the criteria for “earning” your last name stitched on your jersey for spring training, exactly?

The second question seemed to be the most answerable without contacting Mr. Wilson himself.

Arismendy Alcantara is not currently on the Mets’ 40-man roster. Nor are his fellow minor league contract signees Danny Espinosa and Adeiny Hechavarria, yet those two have names on the backs of their Met jerseys this spring. Alcantara has shown his visage in 157 major league games over four seasons so far in his career, which, okay, pales in comparison to Espinosa (872)  and Hechavarria (811) when it comes to “real life” experience.

However, there’s a surname stitched on Rymer Liriano’s jersey too, and Liriano only has 59 major league games to his CV and is also not on the 40-man. It’s almost cheating to bring up Tim Tebow, but hey yeah, Tim Tebow –  zero MLB plate appearances, yet you can read his last name between his shoulder blades, even though he probably has one of the most recognizable faces on the planet.

The Detroit Tigers had two Alcantaras in camp, and they both were identified with names on their back. Victor Alcantara has pitched in 33 major league games in his life, so fair enough. Sergio Alcantara has zero major league experience, and even though he made a great catch to give the Tigers a victory over the Yankees last week that for all we know could have been the highlight of the Tigers’ 2019 season, he was rewarded two days later with a Double-A assignment.

Two of Preston Wilson’s former teams, the Cardinals and Marlins, appear to give everyone in camp a last name on their jerseys, if my speed viewing of all of the games they’ve played so far on MLB.TV did not deceive me. This would include Marlins pitcher Sandy Alcantara (42.3 career ML IP).

There are a few teams that give out absolutely zero last names this time of year – the Yankees (naturally), Blue Jays, A’s, Rockies, and Angels. Colorado thinks Nolan Arenado is worth $260 million, but not seven letters. Mike Trout is apparently someone the Angels consider a fictitious anthropomorphic fish existing exclusively in Bryce Harper’s fantasies.

What does this do the psyches of free agents who go from, say, the Reds to the Angels, or the Cubs to the Rockies? One day you have a name, and the next someone is making The Prisoner references to your face and you are too embarrassed to admit you are too young to get it.

This exercise seemed to raise more questions than answers. Thanks for nothing, spring training.