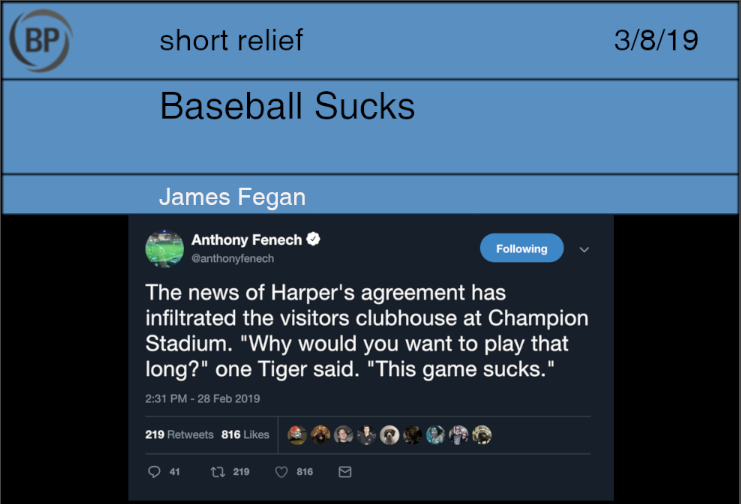 Have we considered this?

Covering baseball, being immersed it, being able to walk up to it, listen to it, smell it and–albeit likely at the consequence of immediately revocation of my media credential–touch it, only increases the suspicion that it might actually suck.

It lasts absolutely forever, demands constant travel, and touts a culture of the necessity of constant work and dedication that a self-selected extension of the built-in eight month schedule and firsthand evidence of a rigorous offseason – which ideally is tied to some burning self-scrutinizing grievance – is a mandate. That culture is on display in the mentions of this tweet, where there is a debate on whether the player in question should be exposed and promptly drummed out of his current employment.

Perhaps this player’s employment with the Tigers involves squatting, where the most mentally involving position on the field also requires elite, inhuman performance from the thighs and ass. I’ve been going to the gym regularly for the past 18 months and it has, frankly, involved more squatting than I could previously fathom. Multiple sets of eight, 12, 16, hell, 20 squats at a time, have all become achievable concepts with built-in knowledge from experience about how much energy they will require to complete, and what physical cues to lock in to maintain form as fatigue sets in. The idea of catching nine innings still seems like trash, and if anything the vision of how much it would be trash, and how trash it would be to do it for eight months, under scrutiny, is further realized with every trash squat. And if I ever suffered something as painful as the impact of sliding across hard infield dirt at one point in any day, I would skip the gym and all the associated squatting.

But beyond the whole physical suffering in isolated parts of the country thing, I return always to this moment from the 2013 NLDS, over five years ago.

At an emotionally devastating moment in David Carpenter’s career, after he just allowed an effectively series-clinching home run to Juan Uribe, and Justin Upton himself struck out to end the game, Upton comforted him with the statement of “That’s baseball, that’s fucking baseball.”

Public humiliation, ruinous, life-altering failure despite maximum effort with no promise of any opportunity for redemption. This, Upton immediately calculated, is baseball. The unforgiving emotional brutality that comes from complete dedication to something that can really, truly suck.

But there are a lot more games today, and maybe one of them won’t. 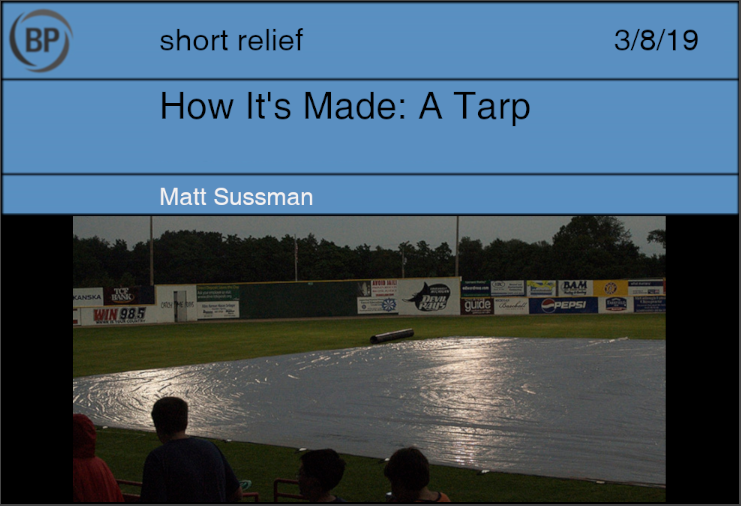 Seen in baseball parks everywhere, the baseball tarp is the perhaps the most familiar large square of fabric rolled onto a natural surface in the country. Its appearance signifies a complete loss of hope in the promise of live sports being played in front of you. But a lot goes into its production before it is unfurled over your optimism.

First, several million reused grocery bags are shoved into a large machine. The bags are checked by a technician to ensure no receipts or dirty diapers are in them.

Next, the machine melts down all the bags into one large amorphous plastic glob. The glob is kept in a special room so that nobody accidentally tries to roll it onto a football field. Another technician with a lab coat and clipboard checks the glob for any impurities, then scribbles furiously on the clipboard.

When the tarp factory gets an order for a new one, a scientist enters the room and cuts off a carefully measured cross-section of the glob.

In previous years, tarps would be hand rolled in a children’s gymnasium, which would take hours but also cancel gym for the day. Now they perform the transformation in a former Blockbuster Video store.

First, they flatten the plastic using a gigantic rolling pin. Once they reach the walls, the plastic is folded over and the process is repeated. At this point in the process, any desired logos or subliminal messages to fans to buy, like, nachos and stuff are painted into the plastic.

Once the tarp has been completely flattened, the inner core which will hold the tarp is brought into the abandoned store, and the flattened plastic is carefully rolled onto it.

This tarp is now ready for use. Thirty-two dudes in cargo shorts then roll the tarp down the street toward the baseball park. Good thing it’s made it in time, those clouds look ominous! 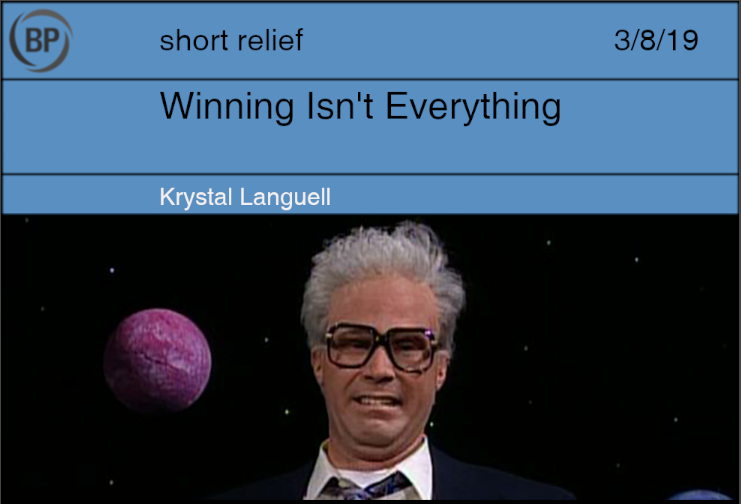 The word budget goes in here somewhere
When you learn one fact and huff off
Try anyone
Unsportsmanlike to rush others
I told a pushy woman on the train HOLD ON
I mean she’d raised her hand to push
Put me in, coach
The Pablo Picasso of free agent signings
Talent gets dredged up
Talent spun from straw
Harry Caray wants to know:
would you eat the moon
if it were made of ribs?
If the computers are listening
the internet will remember I once said
I don’t kill time or win style points
and I deleted a line about Peoria
In thirteen years the moon
could be green cheese or ribs
Bryce Harper will work in Philadelphia
Who marinated in the timeline
Slumping into giant contracts
Ask the computer please
What is the budget for talent
What is the budget for attitude
for abuse for sleeves for raw meat
for seagulls for guardrails for
the ocean under the ocean and
the budget within the budget
Some places have a slush fund
Others really get in your face