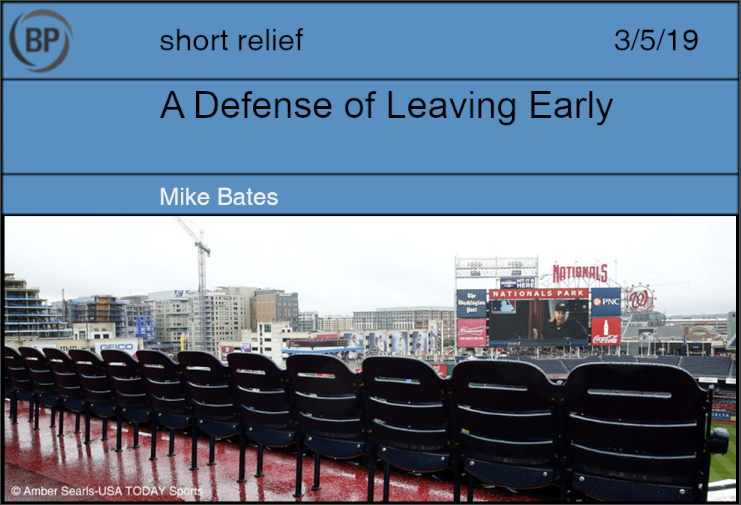 Friends, before I get properly started, let me assure you this is about baseball. I just need you to bear with me for a paragraph or two.

I took my seven-year-old daughter to a basketball game on Sunday. The Iowa Hawkeyes women’s basketball team was playing Northwestern on Senior Day, and thumped them quite thoroughly. A tall person named Megan Gustafson absolutely dominated, scoring 34 and bringing down 12 rebounds. With five minutes to play, the Hawkeyes were up by 20 and pulling away, and I gave my daughter a choice: Stay and watch the end, or leave early. (For context, it’s important to note that there were 12,000 fans in attendance and getting that many people off of campus at the same time is kind of like trying to move wedding guests through a buffet line; everyone eventually gets their chicken breast, but it’s rubbery and unappetizing and everyone is miserable).

She chose to leave early, and I supported that choice. It’s the same policy I have with baseball games that we attend as a family.

In addition to the seven-year-old, I have a 12-year-old son. Neither of them are particularly huge baseball fans. The boy isn’t interested in sports at all, really, but has many good points in his favor that mostly make up for it. My daughter enjoys the game, but hasn’t really developed enough enthusiasm to begin following it, and mostly is there for the food, the chance to be on the jumbotron, and getting to hug the mascot.

While going to games will probably never be as much fun for them as it is for me, I’m very invested in them having a good time. For one thing, it makes my experience better not to have whiny, miserable children. For another, I’m still hopeful that they’ll come around eventually, and I view making each game we go to as an opportunity to build goodwill both toward me and and the game. I want the kids to look back on days at the ballpark as happy experiences. I want their fond memories and nostalgia to bring them back, because I want them to go with me for the rest of my life. And I want that to be their choice, and not just an obligation to be fulfilled if they want any kind of inheritance. I don’t want them remembering baseball games as that slog where their asshole dad made them sit still for three hours and then made them sit in traffic for another one.

Whenever I’ve mentioned my policy of leaving when everybody’s ready to go, I’ve heard from a bunch of Internet Tough Dads who tell me that I’m coddling my kids. And that their kids are learning to appreciate the game The Right Way. But I suspect those kids don’t actually like their dads; they just don’t want to be yelled at. And I’m guessing that does more damage in the long run both to their relationships and to their fandom.

Every time I let my kids leave early, I’m making a long-term investment that, given how unpopular baseball is with young people and how attendance has fallen these days, I think the sport is going to need down the road if it’s going to remain healthy. And I hope, someday, they’ll thank me. 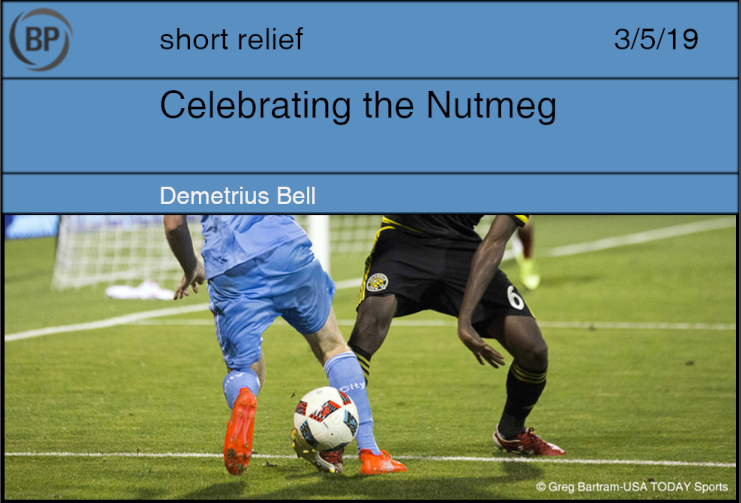 In sports like soccer and basketball, getting nutmegged is an inevitability. It’s more common in soccer but no matter what sport it happens, the result is always a moment of pride for the nutmegger and a great moment of shame for the nutmeggee. The level of excitement ranges from merely being cool to being absolutely spectacular, but the common denominator is that it’s always fun to see someone put the ball through another person’s legs.

While you expect to see something like that when defenders stand in direct opposition, you really don’t expect to see it happen in baseball. When it does happen, it’s normally associated with a moment of dread instead of being a moment that you’d want to relive over and over again. You also don’t normally see a pitcher put the ball through the legs of the batter. Pitchers are doing some insane stuff right now with the baseball, and if I were a major league hitter, I would be absolutely mortified at the prospect of having to figure out how to combat the witchcraft and wizardry that I’m about to deal with for the upcoming at-bat. It’s a rough life for hitters right now.

Nobody knows that better than Jordan Patterson after what happened to him last week. It’s understandable to get bamboozled by a pitch in the middle of June. At that point, everybody’s firing on all cylinders and you’re eventually going to run into someone who throws a breaking ball that looks like a strike for 50 feet and then turns into something that is unrecognizable to the human eye once it gets 10 feet away. I don’t think that Patterson was expecting to run into something evil like that during the infancy of spring training.

Unfortunately for Jordan Patterson, that’s exactly what Dan Altavilla had in store for him this early in the year. Patterson was expecting something enticing to hit and that’s what he swung at. Altavilla transformed it into something disgusting, and what we got was one of the rarest moments in this sport: A baseball nutmeg.

I’m impressed with everybody involved in this scenario. Dan Altavilla threw a pitch that flew right threw the batter’s legs and landed in the batters box but was enough to convince the batter to swing at it. Jordan Patterson swung at that pitch and didn’t fall on the ground, himself. Omar Narvaez was the catcher and he deserves praise for making sure that this mystery ball didn’t end up reaching the backstop.

The only ones who deserve criticism are the fans in attendance. There was only a mild reaction to the absurdity that they had just witnessed. Maybe they needed some time to take it in, or maybe this isn’t the type of sport where the crowd can force an exhibition game to end after someone got nutmegged into the next dimension. Either way, it’s proof that maybe Lionel Messi does have a kindred spirit somewhere on the baseball diamond. 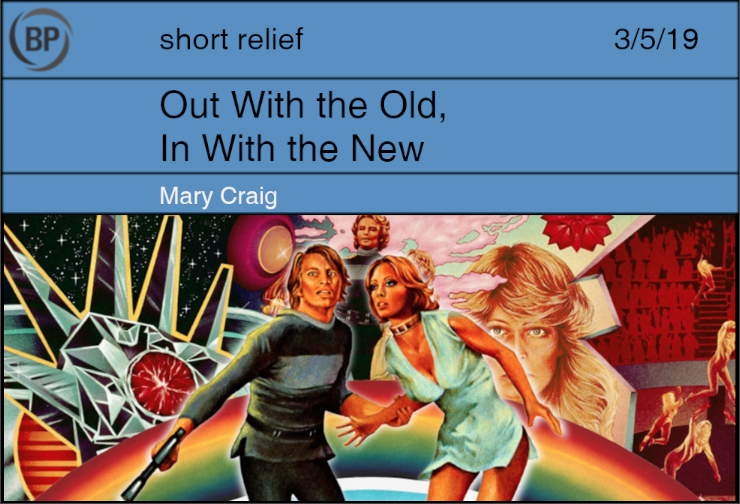 Although it’s still technically Winter for another 15 days, the delightful sound of bat-on-ball emanating from my television means that in all but fact, spring has arrived. And with its arrival, it has brought the general sentiment that things are beginning anew. Spring cleaning has begun, bringing with it the saying “out with the old, in with the new” and a renewed sense of purpose and hope. For several years following the 1976 film and television adaptations of William F. Nolan’s Logan’s Run, the old adage took on a more sinister meaning that I’ve found myself re-visiting these past few weeks.

A utopian work, Logan’s Run takes place in the post-apocalyptic year 2274, in which the remains of human civilization live within a domed city. This computer-operated city promises to fulfill each of its members’ most hedonistic desires. However, there looms a constant threat of overpopulation, warded away solely by the participation on one’s 30th birthday in the “Carousel” ceremony. Colloquially referred to as “out with the old, in with the new,” this process kills every 30-year-old under the guise of initiating a process of rebirth, making them believe they will live another 30 years. Eventually, the two main characters, Logan (a police officer) and Jessica (a woman seeking to find a Sanctuary), escape the dome and encounter an old, crazy cat man, proving that it is possible to live beyond the age of 30. They then, naturally, attempt to prove the existence of the outside world to the other inhabitants of the domed city.

Both the film and TV show, as one might expect, feature a thin, predictable plot, instead relying on innovative visual effects to draw in viewers. Indeed, there are many completely nonsensical elements, including a long scene of the protagonists escaping the city (and a robot Tin Man) through a giant, melting ice tunnel, which concludes with the pair changing from their soaked clothes into animal skins and then almost immediately back into their wet clothes. What is most likely to stick with viewers, at least as far as the film is concerned, is the prominence of cats the animal and Cats the musical (all of the old man’s 200 cats are Jellicle cats).

This Spring Training, more so than the cats, I’ve found myself thinking about “out with the old, in with the new.” As teams churn out the lie of finite resources to justify the long list of free agents on the “wrong side” of 30, I long for the world of Logan’s Run and the promise of a happy ending after a mere two hours or 14 episodes.

You need to be logged in to comment. Login or Subscribe
David Irvin
The first view of the Green Grass of a Major League ballpark is a right of passage. Every Dad ( assholes included) must provide that memory. Perhaps a fan is created.
Reply to David