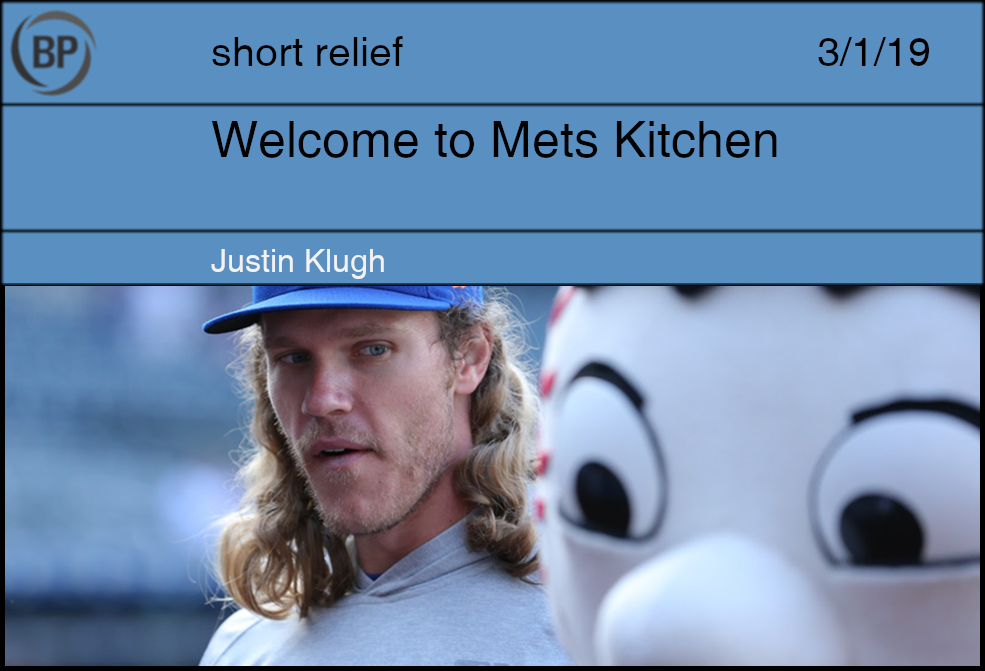 "I guess he cooked some chicken, and didn't know how to cook or something. He was throwing up all night. We're going to have to teach him how to cook so he doesn't miss any more games." 🍗

Hello Brandon, welcome to Mets kitchen. I’ve got to be honest, not a lot of people make it down here. Certainly not any players; not since Keith Hernandez chased a cat down here and I had to knock him out with a ladle before he discovered the sub-basement full of squealing Mr. Met babies.

Anyway, let me just, consult your file here… ah, yes. “Made ill by consuming undercooked chicken.” Well, have a seat. Thanks for, uh.. thanks for coming in here in a full-on sprint. You seem like the kind of guy who wants to be told what a good job you’re doing, so… good, uh. Job.

All right, first things first, we’re gonna need a raw chicken. I think I’ve got one around here somewhere, but ah. Hmm. Empty freezer. You know what, I think I just used the last one. Hang on, I just have to wrench open this sealed steel door here. Don’t be alarmed if you hear something that sounds like cats having hate sex, it’s just a brood of slick, baseball-headed larvae, fighting over a raw chicken and I’m going to have to do my best to yank it away from them. Whew, they are not gonna like this, but orders are orders.

Oh no no, thank you, but please, just, sit down. Any help from you would… not be received well. I have the only human face they’ve ever seen and frankly I have no idea how they would react to you. If their reactions to all other things are any indication, I would guess “poorly” and “wetly.”

Hello, children! And I use that term loosely, ha ha ha. I know this goes against every instinct in your tiny, writhing bodies but I’m gonna need that chicken back.

Aah, wow. That’s a real shrill scream you’ve got there. Hey, some of you have teeth now! That’s terrific. I don’t know why that happened, I don’t think your father has any. Fun little twist in the evolutionary chain.

Oof. All right. I got it. Thanks for waiting, Brandon. I hate having to kick them like that, their bodies are so malformed and spongy. I see you’ve adopted a look of abject horror. I understand, but I promise you, we’re going to cook this chicken in a way that won’t make you ill again.

All right! Let’s find a recipe here. Or you know what, why I don’t just show you how the oven works. I think that might have been your whole problem, really.

So you just have to turn this knob on the top here, I think. Yeah. And then you just probably want to open the–

Jesus christ! One of them must have–there it goes!

No, for the love of god, don’t touch it–there’s no way you’re immune like me. Here, take this fire extinguisher and if you see it, just… you know. The ones that get a breath of fresh air won’t ever go back in. Plus, they start rapidly evolving into the phase two model. Which you probably don’t want to see. Hell, I don’t want to have seen it.

Look, maybe we better cut this short. Get out of here before you see something you’ll see every time you close your eyes.

No, no; take the extinguisher. You might need it. I’ve gotten pretty good with the ladle. And here, take the chicken. Don’t forget what we talked about–use your oven to cook it more than you did last time. That’s really pretty much it. Four hundred degrees should do it. And don’t– 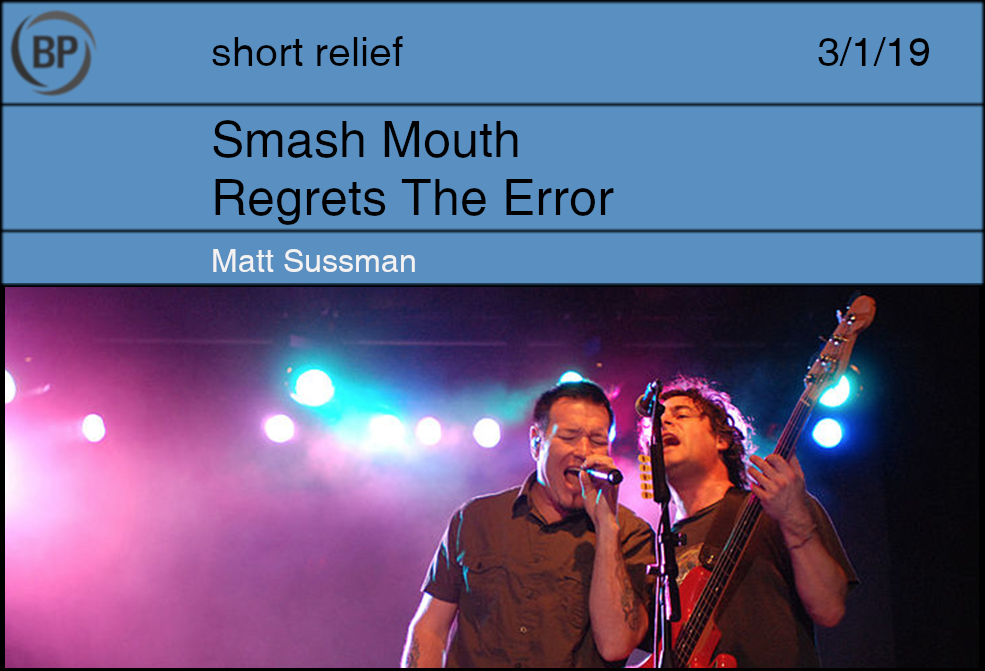 All of us at Smash Mouth Media take getting our facts seriously. As far back as our biggest hit, “All Star,” everything was well-sourced, such as reports that the world was gonna roll me. You can’t build a brand by making stuff up.

And in the last week, we still stand by our reporting. We trust our sources that the Giants brass had disagreements with signing Bryce Harper; that president of baseball operations Farhan Zaidi did not want to break the bank on him, though the owners wanted a megadeal. Other media reports that the Giants did make a decent offer only seem to confirm our original reporting, and while that may be the case, we should have been more specific in the likelihood of the Giants signing Harper. We could not remain objective, we got our hopes up, and for that we are sorry. We will learn from this.

THIRD EYE BLIND: [enters from sliding door] I wish you would s—

SMASH MOUTH: — oh don’t worry. I’m not going to. It’s just … this has been such a weird week and, to be honest, last couple of months.

THIRD EYE BLIND: It’s been quite the offseason.

SMASH MOUTH: But I wanted to make a difference. Two of the biggest free agents in several years don’t sign until February? And all the same cat-and-mouse reporting kept sloughing through Twitter and it didn’t seem to do any good. I just tried to be different. And it feels like it backfired.

THIRD EYE BLIND: There’s no way to say it, Smash Mouth. It definitely did.

SMASH MOUTH: Am I just doomed to be known for 90s songs? Heyman and Rosenthal make it look so natural. They seem to know the right people.

THIRD EYE BLIND: Maybe that’s exactly how it’s supposed to work. These “sources” know exactly what they’re leaking to the public to leverage the worth of these free-agent contracts. It’s a big machine and there’s no way you can expect to just jump in and change it.

THIRD EYE BLIND: If you do not want to see me again,

SMASH MOUTH: Thanks for understanding. 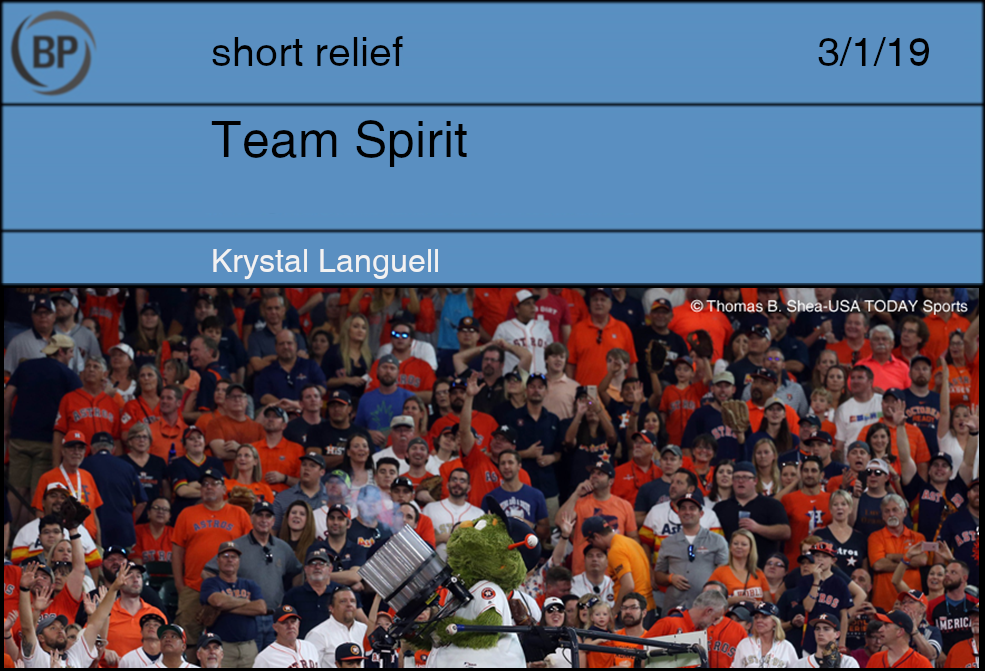 to stand atop your desk

I didn’t know the script

and when I was told to climb

onto my desk I refused

because that’s my leadership style

sticking up for yourself

is at odds with team spirit

the script rolled on

it said those who don’t climb

we already wear the same shirts

that’s what color they are here

and if his speaking gains

excellent as long as it works

reach for the ceiling tiles

but prove it later