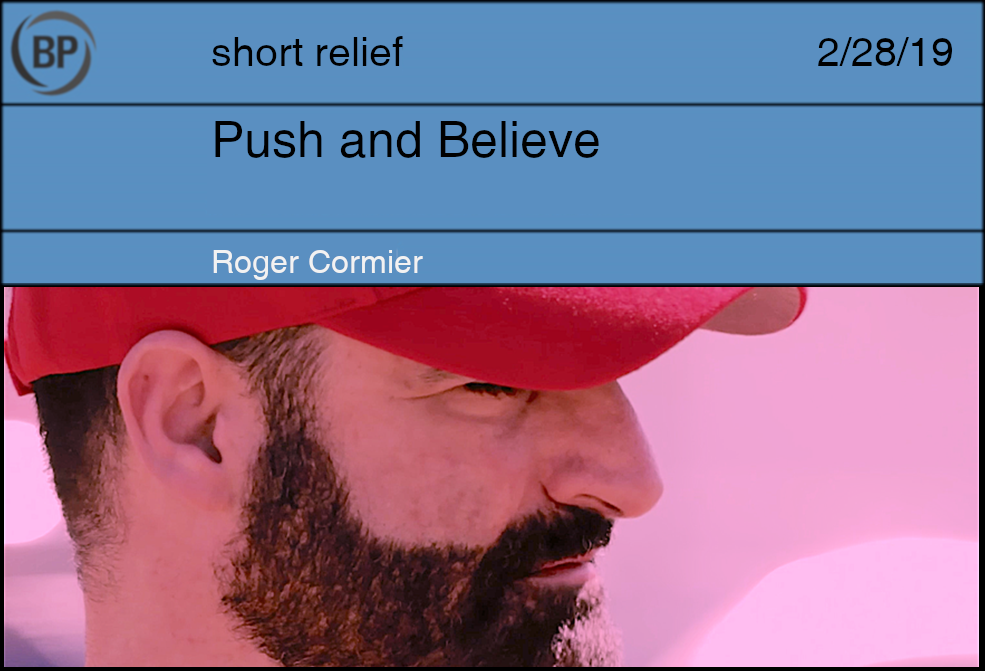 Comedian Brody Stevens died last week of an apparent suicide. He was 48.

Stevens was one of a kind. The phrase “comic’s comic” actually applies with him. Not even Dick Van Dyke himself could tell if Stevens was killing or bombing during sets.

It wasn’t just Van Dyke and other popular comedians who commented and expressed sorrow on his passing – it was baseball players and coaches like Jake Arrieta, and Dan Haren, and Justin Turner, and Kevin Youkilis, and Joe Maddon.

His cadence was as distinctive and earworm-y as Mitch Hedberg’s without ripping off Hedberg at all. Almost the exact opposite, really. Stevens was intense. He talked about it all the time, how he was burdened with the mentality of an athlete forced to live a quotidian life. Whole Foods couldn’t contain him; Trader Joe’s wanted his business. Describing his act is a futile effort – it just sounds like peak toxic masculinity: an ex-athlete rattling off his Hollywood resume (he was in The Hangover, cut out of the impossibly long Funny People), demanding the audience show him respect. It was a joke on ex-jocks pretending to still be the big man on campus. He got it. You got it.

This was always the set of Brody’s I would show new guys I was dating. If they got it, we could keep hanging out. https://t.co/stIxf8l28V

Hidden away in the middle of the lone season of Brody Stevens: Enjoy It!, which Comedy Central aired early Monday mornings at midnight in the dead of winter five years ago, was a great segment where Stevens relived the peak of his baseball career. Stevens was a star pitcher at Reseda High School, outdueling future closer Rod Beck in a playoff game 1-0. Stevens is certain he’s not going to walk a batter. He’s certainly not going to give up a home run and lose the game. He’s definitely not going to pitch briefly for Arizona State University only to hurt his arm and find a new vocation entirely. We all know where this is going. That’s okay, because it is Stevens and Zach Galifianakis in catcher’s gear. It’s still funny.

My favorite story was sadly never filmed live, nor reenacted for posterity; we only have comedian Matt Braunger’s recollection. Braunger and Stevens performed in front of “every great living baseball player” at a huge private Florida resort for a benefit in 2010. While Braunger, one of the best comedians out there but not a baseball fan, did okay, Stevens completely destroyed. Walking through the audience “like a pissed off coach”, he called out the players individually, reciting their stats dating back to high school and bringing up mistakes they made. He poked Ken Griffey Jr. and screamed, “I touched him. I win!” The players laughed so hard they cried. Griffey went up to Stevens after the set. He poked him and said “I touched you.” “He was like a kid,” Braunger remembered of Griffey, probably not realizing the pun on his nickname. “We all were. Just grinning. Comedy is so fun.”

Griffey Jr. attempted suicide when he was 17 years old after his first year in the minor leagues. He first went public with the story in 1992, hoping it could show others would not follow his lead. “Don’t ever try to commit suicide,” Griffey said he wanted to tell kids. “I am living proof how stupid it is.”

Sadly, it is not that simple. Depression turns your brain into your worst enemy. It tells you there’s no way out. Logic is no longer considered. It’s hard for loved ones who don’t suffer to understand because they can’t see the depression on an X-ray or MRI, like you would an arm injury.

Stevens had been open about his depression and anxiety. In his last Periscope he told viewers he was back on Lexapro after time off of it, noting he was unhappy about feeling anxiety in his chest. He was scheduled to visit the Cubs this week in Arizona.

The National Suicide Prevention Hotline is 1-800-273-8255. Okay Together is a website full of stories from athletes and celebrities who suffer from depression and anxiety curated by Red Sox broadcaster Josh Lewin. As corny as it sounds, you are not alone.

Moment of silence before today's game in honor of Brody Stevens. pic.twitter.com/gwtj1SyF5O 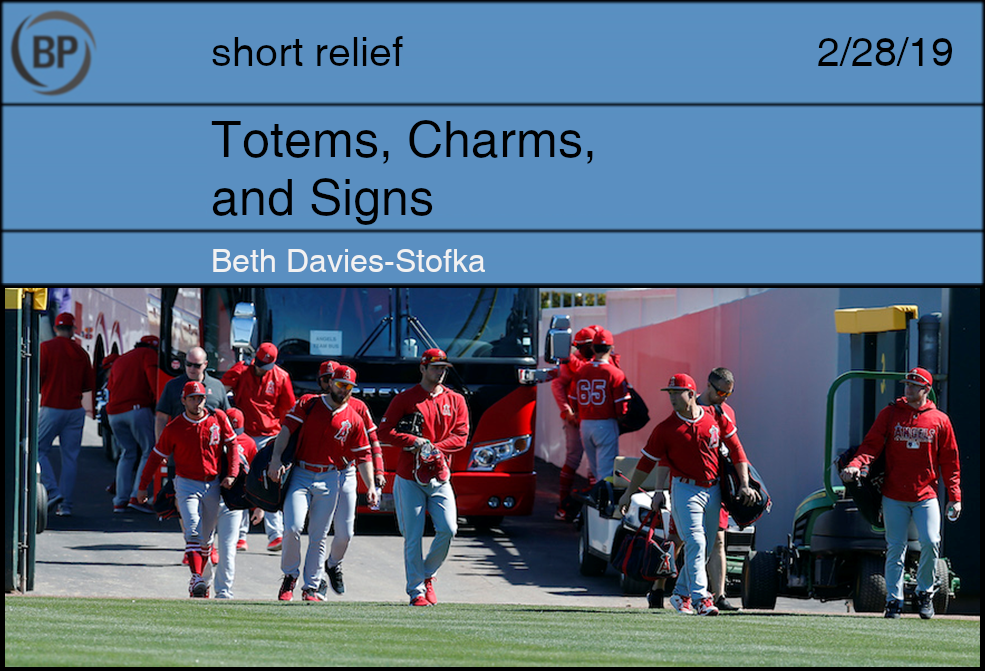 In spring, the players come and go along the outfield fence.
From shoulders hang enormous bags while chiropractors wince.
Stopping en route to sign for fans, agreeably relaxed,
They’re working out, they’re touching base, their nerves are still intact.
This is a time to practice, make connections, sort it out.
Forget the winter’s rumors; prove yourself, delay the doubt.

Mixed within those bags with balls and gloves are totems, charms, and signs.
Trinkets boosting luck and skill could not be better timed.
In Judge’s bag, a wristwatch that’s adorned with Viking runes,
Altuve’s bag, a  CD of They Might Be Giants tunes.
Manny has a training tape to hustle disco-style,
While Mikolas is carrying a ravenous reptile.
Berríos has a coffee cup, no end of the stuff,
For Trout, contented and relaxed, a barometer’s enough.
Arenado’s hiding Chapman’s hat and Chapman, Arenado’s,
Buehler’s got some effin’ socks and yeah, they sport his motto.
deGrom just keeps it simple: a medal marked with K.
Betts goes empty-handed, his brilliance lights the day.

It’s the start of spring and the players are hoping.
No dream is truly free.
But they sleep and they work, and they train and they laugh,
And lead us to believe.
‘Cause Doolittle’s there with his charm on his sleeve.
It’s his heart for you and me. 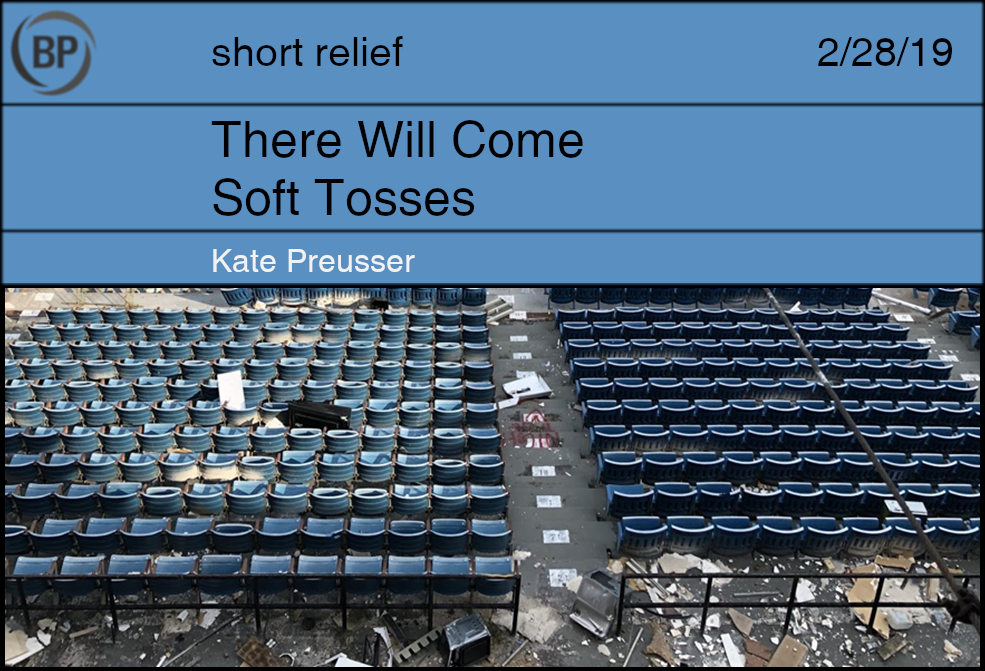 (With apologies to Ray Bradbury)

On the baseball field the pitch-clock sang out. 20-second violation, batter is assigned a ball. The gears on the scoreboard ground to life and a single bulb illuminated next to a painted B, chipped and flaking. 20 seconds, batter is assigned a strike. A red light flickers on, glowing weakly in the morning sun. The scoreboard’s blank face looked at the empty seats in the stands. The seats looked back. One on the end, the one with the hinky hinge, fluttered slightly in the hot breeze, as if waving hello.

A sudden buzz of static announced that the loudspeaker had something to say. Now, fans, it’s time for the seventh inning stretch. So stand up, stretch out, and sing loud. Across the pressbox, open on all sides and sunbaked where windows once were, dingy white keys depressed and the song spooled across the empty field. Take me out to the ballgame, take me out with the crowd. A crow, the only sign of life anywhere the eye might see, alit on the remains of the visitor’s dugout and cocked its head inquisitively. The recording had a skip in it. I don’t care if I ever get back. Ever get back. Ever get back.

The recording wore itself out eventually, as it always did. Down the field, a StatTech RoboUmp rolled out to dust off home plate, which was covered in a fine layer of ash. The ash continued to drift down over the plate, over the field, as it had all day for months now, or maybe years. One shiny silver arm descended again and again, dusting with increasing insistence, until the pitch-clock chirped again. Two minutes for warm up pitches from standard distance. Two minutes. With a great metallic groaning, the pitcher’s mound raised itself up to lever forward four feet, four inches. Sixty feet, six inches intoned a cool female voice. The pitch clock reset and began cheerily ticking down. A faded sheet of newspaper, a relic from a bygone age, rolled across the field, buoyed by a strong gust of wind. “Strike,” declared StatTech, signaling with its shiny silver arm. The scoreboard creaked. The pitch clock reset and began its endless countdown again. The ash continued to fall, over all things everywhere, all the non-living and all the dead.