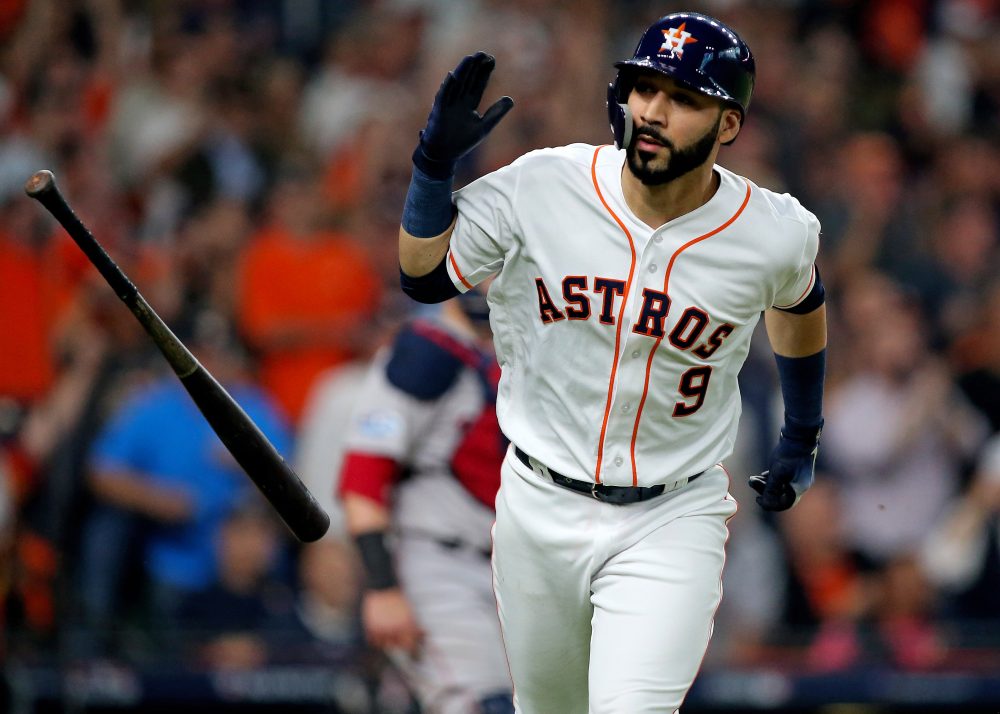 If the Twins had signed Marwin Gonzalez three months ago, it would have made perfect sense. They had an obvious opening at second base and I’m among those who viewed Gonzalez as the most desirable non-Manny Machado middle infielder on the free agent market, ranking him as the no. 20 overall free agent. Instead, they signed Jonathan Schoop to a one-year, $7.5 million deal.

If the Twins had signed Gonzalez one month ago, it would have made a lot of sense. Their lineup was already set following the additions of Schoop, Nelson Cruz, and C.J. Cron, but their payroll was still below $100 million and they seemed poised to make more impact moves, particular on the pitching front. Instead, they signed only right-hander Blake Parker and left-hander Martin Perez for a total of $5 million.

To sign Gonzalez now, when every lineup spot is accounted for and such little help has been given to a shaky pitching staff, is certainly surprising. And yet, what’s the downside? They had plenty of opportunity to acquire pitching help and haven’t. Beyond that, even after signing Gonzalez the Twins’ payroll is $12 million below last year’s mark and $24 million below the likely MLB average, leaving room for more shopping. Given the timing there’s no logical way to paint this as choosing Gonzalez over pitching, in which case it’s really just Gonzalez vs. the Twins not spending any more money. (Not spending any more money is projected for 0.0 WARP.)

His on-field fit may seem trickier, and it’s not without issues given the Twins’ other hitters, but the beauty of Gonzalez is his versatility. He has a good bat—a switch-hitter with 20-homer power, PECOTA projects him for a 107 DRC+ this season—but Gonzalez’s real value comes from being able to play nearly anywhere defensively. Combined from 2016-2018, he started at least 40 games at first base (136), second base (63), shortstop (85), third base (40), and left field (130). Rookie manager Rocco Baldelli, who comes from the versatility-focused Rays, will no doubt treat him as a 10th regular, using Gonzalez in a super-utility role bouncing around the diamond.

That’s more or less what he did in Houston while logging 518, 515, and 552 plate appearances from 2016-2018. However, while being an “everyday player” by manning a different position each day may sound doable on paper, in practice surpassing, say, 300-400 plate appearances likely requires sliding into a more permanent position at some point. Three years ago, Gonzalez found himself as the Astros’ primary first baseman down the stretch. In each of the past two seasons, he subbed for an injured Carlos Correa as the primary shortstop early and then moved mostly to left field.

It’s impossible to know for certain where that more permanent home could be in Minnesota, or when he might stop playing somewhere new each day, but there are plenty of candidates. Miguel Sano is a major question mark, in general and specifically at third base. Schoop is trying to bounce back on a one-year deal, but a poor first half could push him out at second base. Cron is under team control for 2020, but is no sure thing to remain the first baseman if he doesn’t hit right away. Byron Buxton has basically never been healthy and effective for more than two consecutive months. And the injury bug can bite anyone.

Plenty of teams could have offered Gonzalez more immediate playing time at a set position, but few teams figure to have more use for a 10th everyday player at some point this season. If every other regular stays healthy and effective, perhaps that means only 300-400 plate appearances for Gonzalez, but it likely also would mean the Twins are a playoff contender. If someone breaks down or struggles—and someone always breaks down or struggles—then the Twins can turn to Gonzalez rather than Ehire Adrianza or Ronald Torreyes. And he gives them all kinds of options for 2020 as well.

Prior to leaving Baseball Prospectus for the Mets’ front office last month, the great Russell A. Carleton wrote extensively about defensive flexibility being an underrated skill, perhaps so much so that it’s an area where teams can find an increasingly rare competitive advantage. Like most teams, the Twins are deciding between 12 or 13 pitchers for their Opening Day roster, leaving only two or three bench spots beyond a backup catcher. Someone who can competently play a half-dozen positions has considerable value. Someone who can do that and be a plus at the plate has never been more valuable.

Now go get some pitching, too.

You need to be logged in to comment. Login or Subscribe
Anthony Worrall
Is this signing the end of days for Sano ?
Reply to Anthony
William Lindeke
No.
Reply to William
Matthew Gold
The Twins seem to be the only team not preceded by the definite article. I"m sure there is a good editorial reason for this.
Reply to Matthew