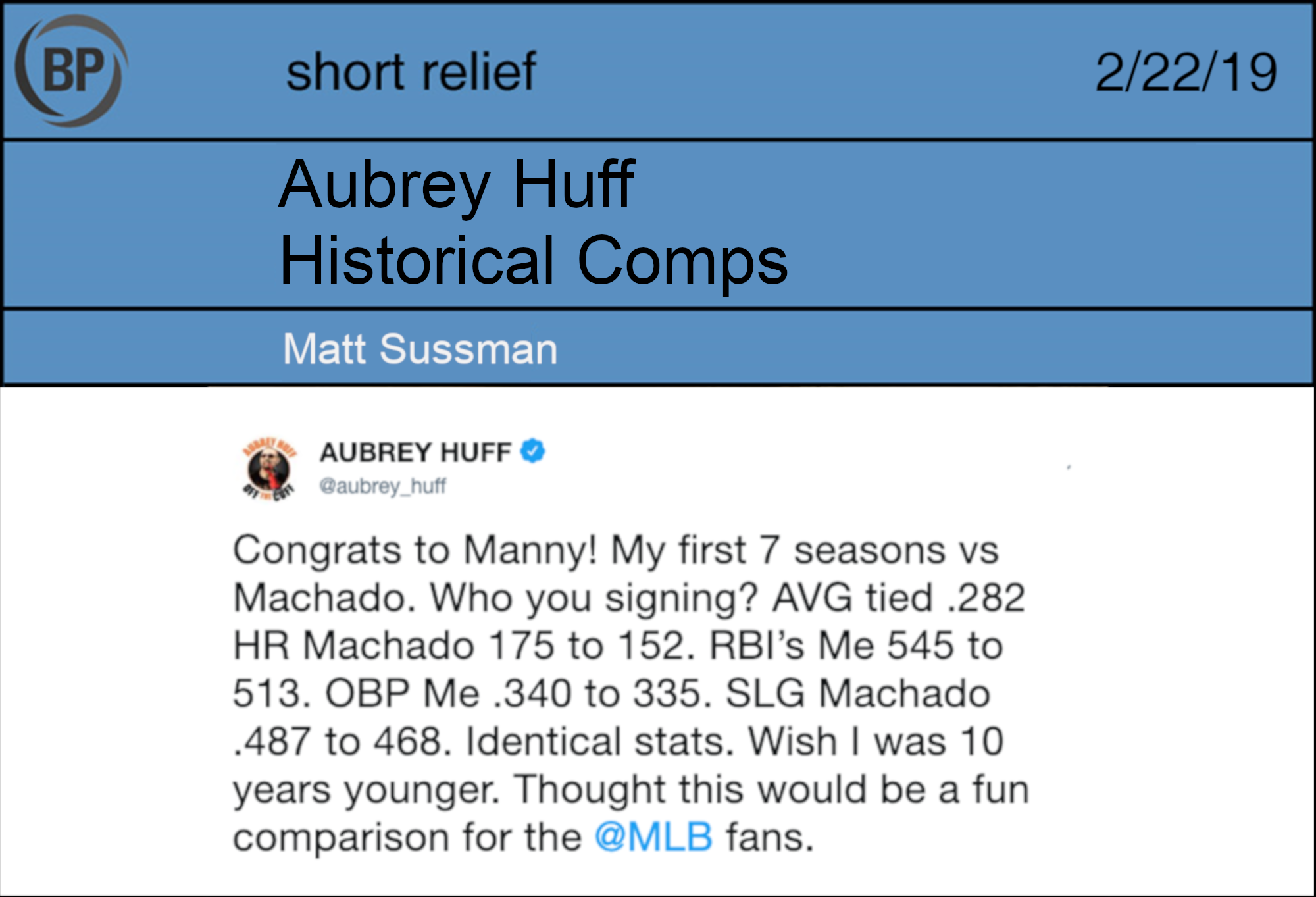 [PROLOGUE: It should be noted, after we absolutely roast this old ballplayer who was probably just having fun but in reality hates advanced stats, that after seven full major league seasons Aubrey Huff was 30 and Manny Machado was 25. We’re only talking five years difference, which is barely anything if you compare it to, say, the Cretaceous Period, one of earth’s most transformative periods. It is really of no consequence. Please sit back and continue enjoying this post.]

In his first seven full seasons, Aubrey Huff beat Home Run Baker in home runs 152 to 58. That’s nearly 100 home runs better than someone nicknamed Home Run Baker. It’s pretty obvious that Aubrey Huff would have been the king of the home run in 1912. Never mind the RBI and batting average titles, however.

Creighton played baseball when it was two words, and they didn’t really record stats all that much. This is an ideal matchup for Huff, against the star of the 1860s who had nothing but intangibles on his baseball card and also died from a baseball-related injury sustained from hitting a home run. Huff also probably had more home runs and stayed alive during every single one.

Lincoln could have played baseball around the same time as Creighton, but instead chose to be the US president. Now we don’t normally like to pull out the advanced stats since he’s not a huge fan of them, but in his first seven seasons, Aubrey Huff had nearly 9 WAR while Lincoln only had the one. And Lincoln didn’t even make it through his first seven seasons and — much like Creighton — died in the middle of a play.

Another nerd? Oh, great. Again, as a reminder, stats have no place in baseball, at least the ones that make you look inferior. And furthermore, Huff probably had way more home runs than this 12th century Persian mathematician. Also, Khayyam? Still dead.

We have a tough matchup here. On one hand, you have a bold, brash man with a constant daily burden to push a large weight up a hill, proving everyone wrong, only to see the fruit of his efforts go rolling back down to square one. On the other hand, Sisyphus was a mythical person and not a historical figure, so it’s entirely possible he would have had more RBIs. 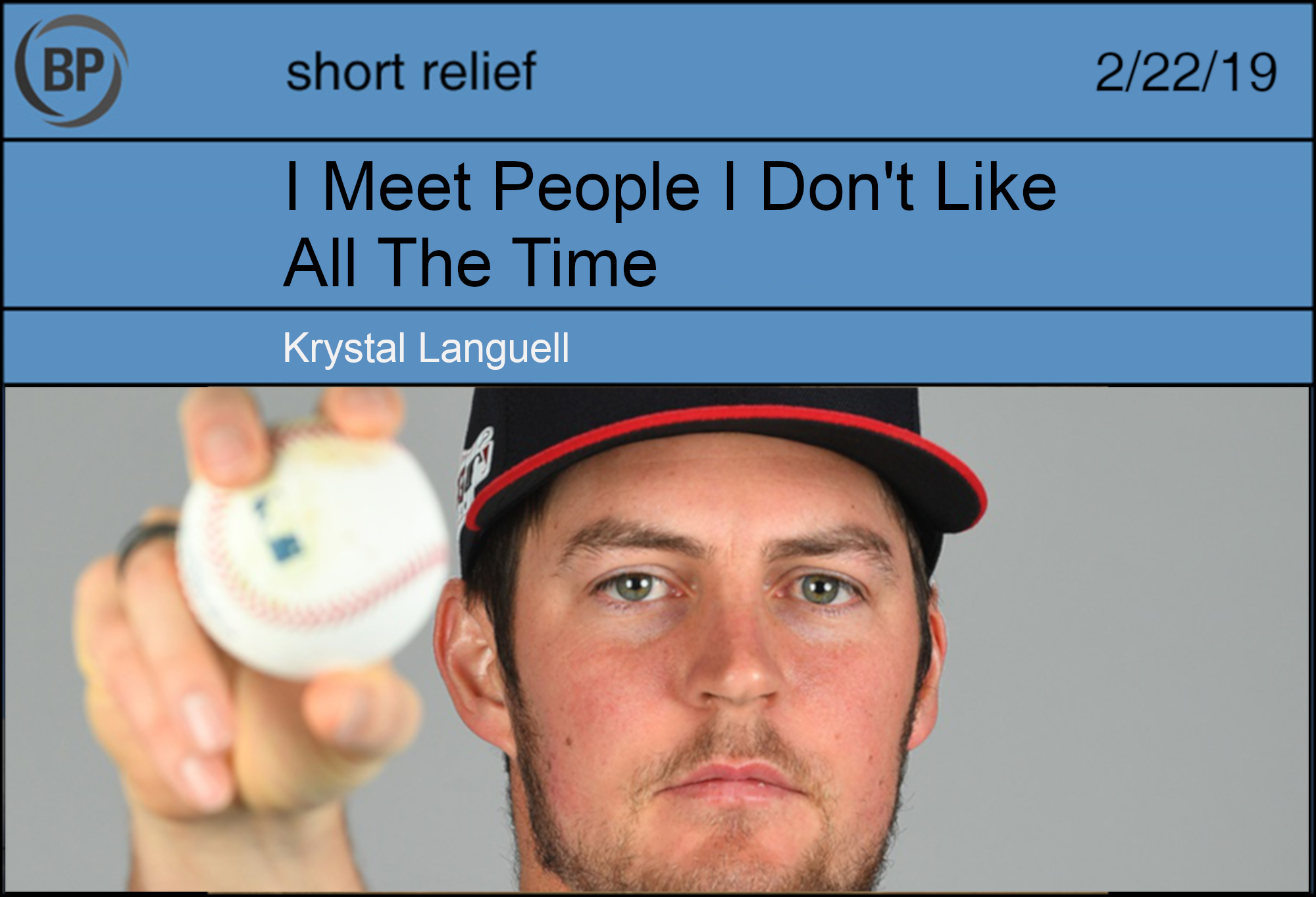 I Meet People I Don’t Like All The Time

As we all know

What if old school relevancy

A lot of guys they don’t talk about 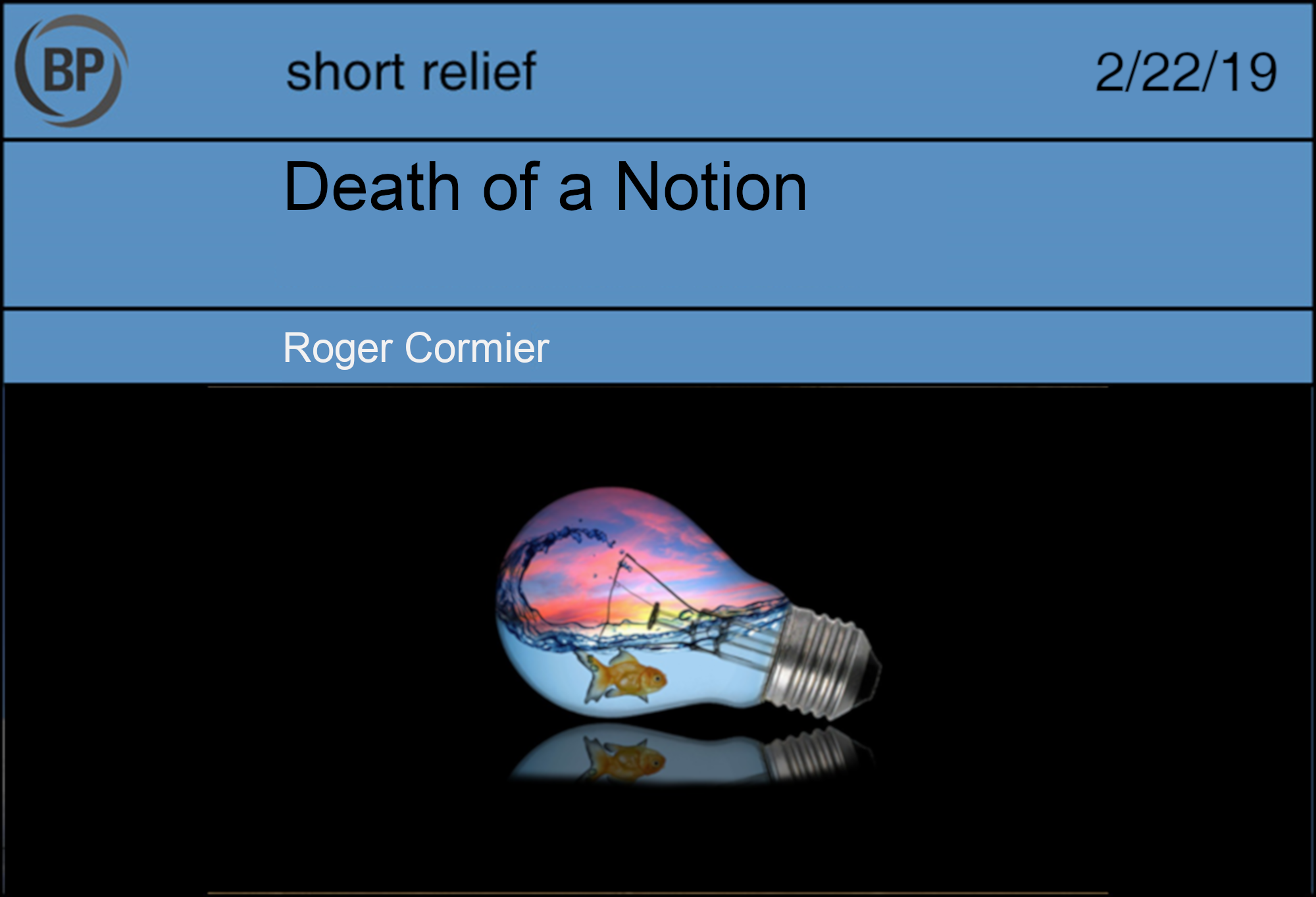 Pop quiz: Which of the following was actually said by Major League Baseball commissioner Rob Manfred?

A) “I reject the notion that payroll is a good measure for how much a team is trying or how successful that team is going to be.”

B) “I reject the notion that the Boston Red Sox won the 2018 World Series.”

C) “I reject the notion that the Boston Red Sox, the team with the biggest payroll, won the 2018 World Series and went on a dominating 11-3 postseason run in the process, and they are owned by someone who is about to get a nasty voicemail.”

D) “I reject the notion that people disagree on the internet.”

E) “I reject the notion that all dogs are good dogs.”

F) “I reject the notion that Las Vegas knows what they are talking about, making ridiculous assumptions, e.g. the Padres will improve because they spent some money. Unless it’s the fine folks at MGM Resorts, in which case they shall receive a friendly, faux-authoritative voicemail.”

G) “I reject the notion that I now find myself actively rooting against those reckless spending, sun-baked brained, secret agents of chaos in San Diego to improve at all.”

H) “I reject the notion that this is the time of year some baseball players claim to be in the ‘best shape’ of their entire existences.”

I) “I reject the notion that there ain’t enough motion in the proverbial ocean.”

J) “I reject the notion that teams could simply buy championships. Who would ever fear such a thing?”

K) “I reject the notion that it is almost impressive how The Oscars telecast always has pace of play issues and they think that’s their biggest issue.”

L) ”I reject the notion some players took performance enhancing drugs, especially during the 1990s.”

M) “I reject the notion that it is ‘kind of hilarious’ it was the owners who made collusion illegal in the first place, all because they believed Sandy Koufax and Don Drysdale’s obvious bluffs into show business as a detective and a “television commentator” respectively in a film starring the original Richard Kimble

N) “I reject the notion that if you write about baseball online and you do not watch The Good Place you are considered an odd duck.”

O) “I reject the notion that Corey Kluber always looks like he was just told it was his high school crush who burned down his farm.”

P) “I reject the notion the MLB owners are reenacting The Producers.”

Answer, in the literal sense: A

Answer, in the “he might as well have said” sense: All of the above