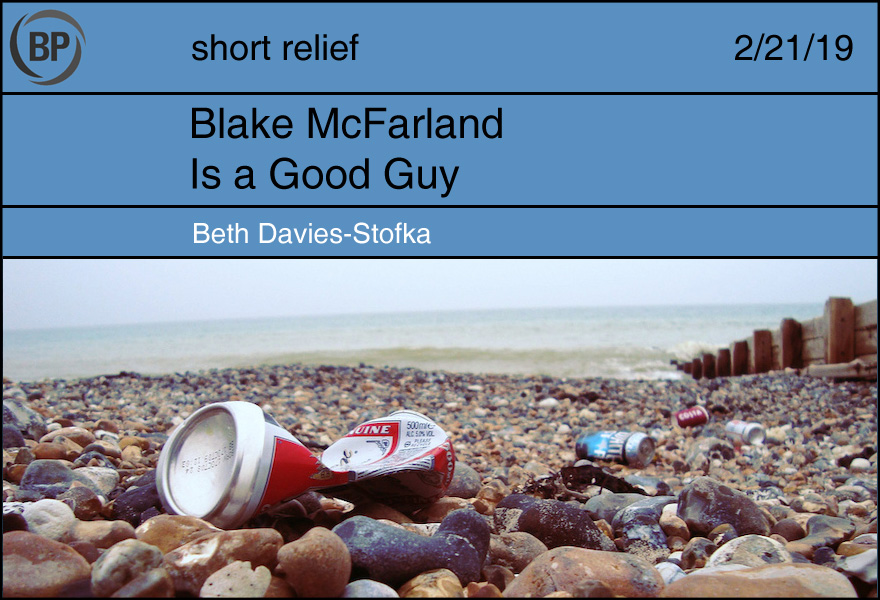 At some point in every artist’s life, they find a purpose or meaning that forces their hand to make something new, something inspiring. To create something so unique that when people see it for the first time, their imagination lights up. For me, that inspiration started by taking ordinary items that people throw away and transforming them into meaningful pieces of art.

Blake McFarland was a pitcher in the Toronto Blue Jays organization from 2011-2018. His numbers were not memorable, and his career ended suddenly when he hurt his right rotator cuff. It wasn’t a serious injury, only calling for some cleanup surgery. He should have been able to come back. But he couldn’t. He didn’t. It wasn’t from a lack of trying, but in that injury, his baseball career ended and a new career began.

Now he is an artist. I like to think that he was steered from baseball to art by Triton, or perhaps Poseidon himself, because Blake McFarland loves the ocean. He wants to heal it. Early on foggy mornings, he puts a pack on his back and climbs down rocks onto remote California beaches, the ones that few people visit. He goes there to pick up the trash. There is so much of it, deposited on those beaches by the ocean itself. McFarland fills his pack and then takes the trash to his studio to transform it, as he says, into meaningful pieces of art.

This past October, McFarland entered one of his most startling works to date in the prestigious Art Prize competition in Grand Rapids MI. The immense sculpture, World at War, is mythic. An immense and powerful male figure, made of tires retrieved from landfill, arises out of a huge pile of trash holding a wounded Earth in his hand. He lifts it high into the sky, almost as if he is pushing it, as high as he can for all to see. His energy is a contained explosion, compelling us into contemplation. The rising body suggests the phoenix, possessing the power of Atlas, redirected to hold the Earth up like a beacon. “Wake up,” it says. “Pay attention to what we’re throwing away. We need to restore our planet’s beauty.” World at War is urgent, but it is blunt and confident.

McFarland was not among the winners of 2018’s Art Prize. There are always far more deserving entries than there are prizes to give out. More to the point, McFarland belonged there. His sculpture and its message mingled freely with the other artists and their works, reaching out to touch the best in people’s hearts. Foraging, sculpting, and caring for the ocean with his own two hands, Blake McFarland is a good guy. I like to think he carries a bit of us with him. 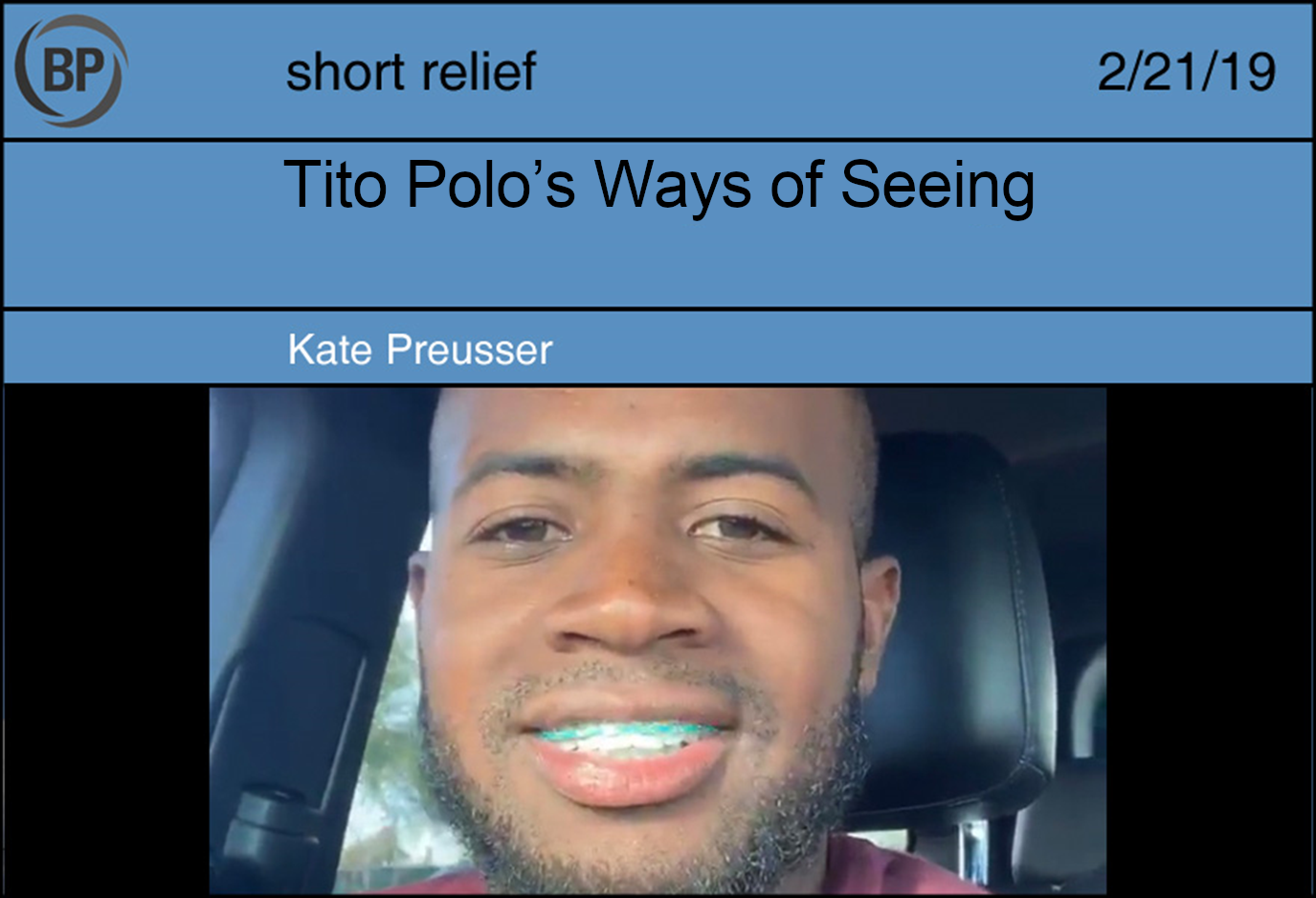 Tito Polo is not, as his name might indicate, a Latin Jazz composer, nor heir to an apparel fortune favored by baseball scouts. He is a center fielder who was previously a well-regarded free agent signing out of Colombia by the Pirates, back when they actually spent money on their baseball club. Six years later, Tito Polo, who should only ever be addressed by his full name, is an NRI for the Seattle Mariners after signing a minor-league deal, having been traded twice: one to the Yankees for Ivan Nova, and once to the White Sox for David Robertson/Todd Frazier/Tommy Kahnle. At 24 and yet to sniff the bigs, Tito Polo has instead nourished his creative side, something he continues to do at his first Arizona spring training. (He also changed the bands on his braces to match team colors. Tito Polo’s artistic expression is not confined to the page.)

“Do you think it will be good?” asks Tito Polo, inviting the people to vote. 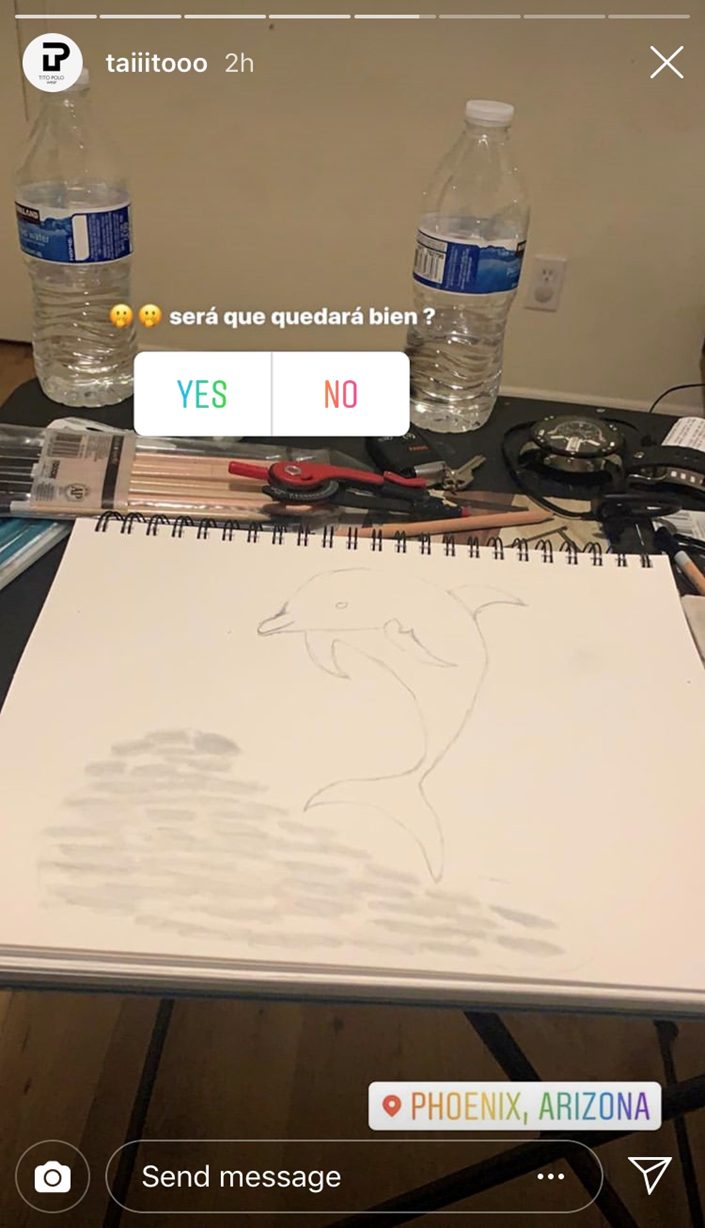 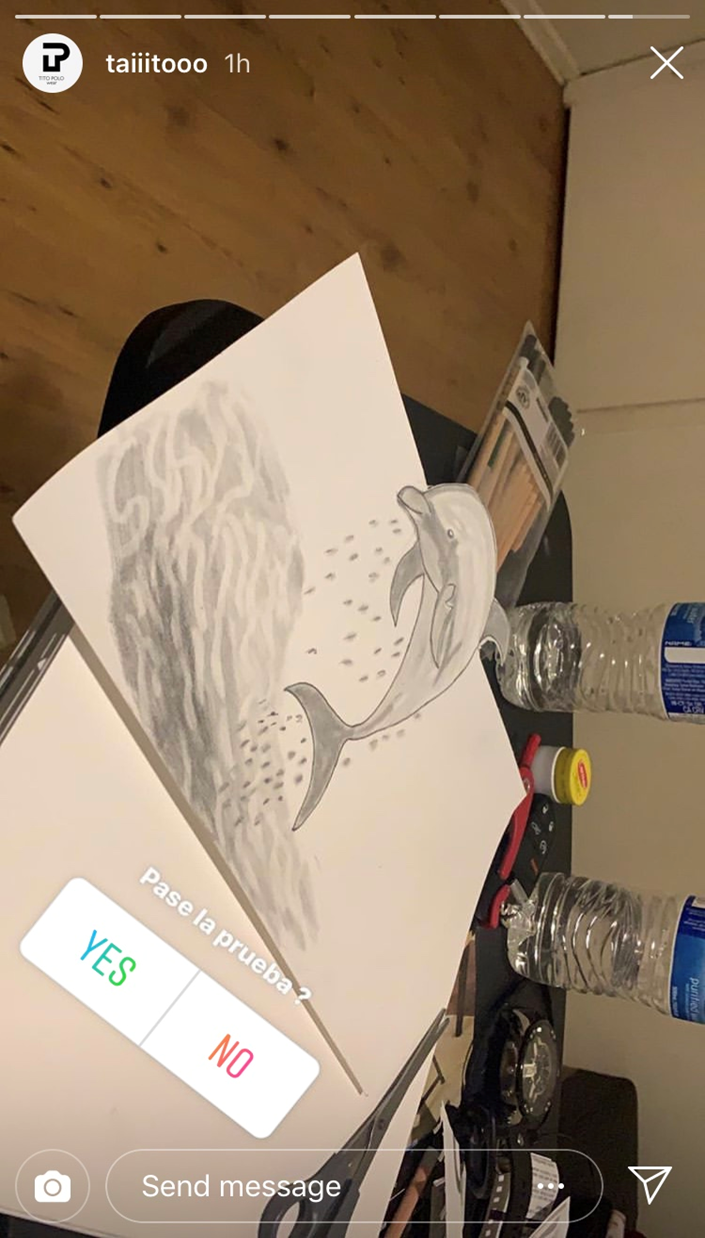 “Does it pass the test?” he asks coyly. Here, in addition to receiving instant acclaim via his Instagram followers, Tito Polo also interrogates the nature of art itself. This piece, known as “Leaping Dolphin” to Tito Polo scholars, explores a hyper-realistic style vis-a-vis a trompe l’oeil construction. Does this dolphin pass the test of “dolphin”? There is no answer hidden in the charcoal-black eyes.

An arrival of a box of pastels (photographed in a personal collection) marks a sudden departure in style: 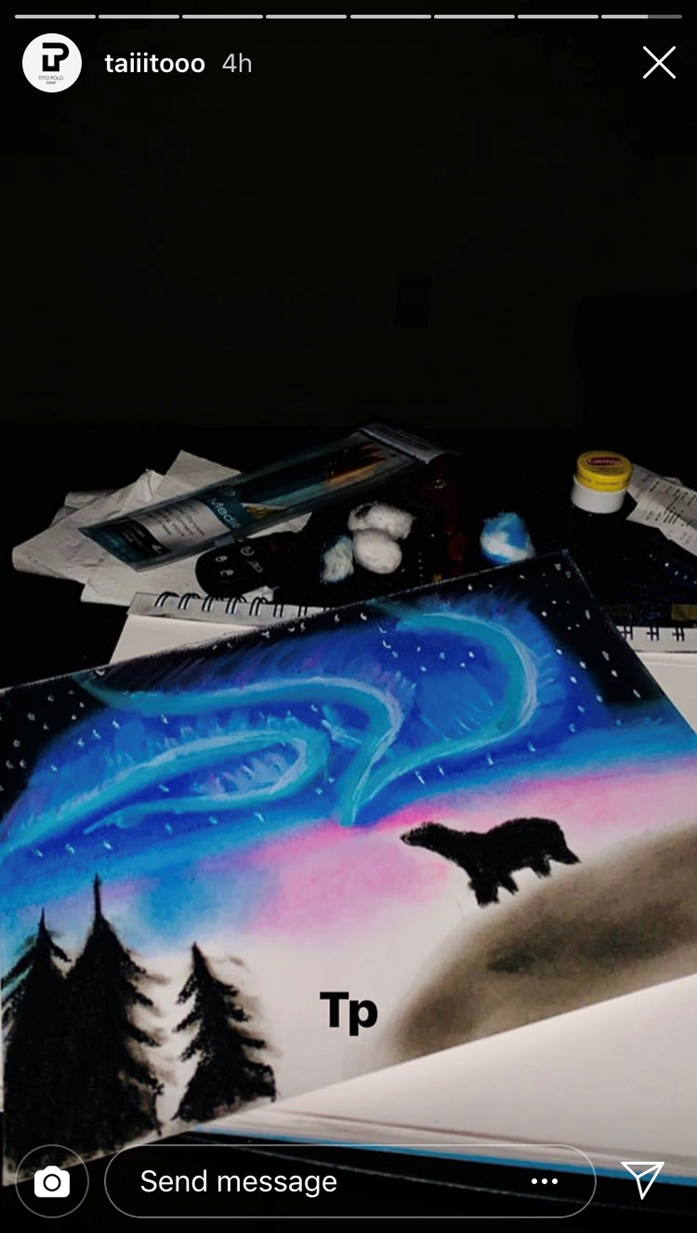 Like the Impressionists before him, Tito Polo paints not the landscape he sees, but the landscape he feels. The Phoenix area is currently mired in a cold snap, with temperatures in the mid-30s; very cold for someone who has recently been playing winter ball in tropical climes. His bold use of color recalls the vivid Arizona sunsets, contrasted against the chill that settles over the valley at night. The polar bear is not meant to be a direct representation, but instead an avatar for Tito Polo himself (Polo, polar), howling his prayer for warmer weather into the cold desert night. This is also the first time he appends his “Tp” signature to his work via picture-editing software, representing an awareness of the palimpsest of modern imaging in the digital age and a willingness to play with layering techniques.

A few weeks later, another change in style. Tito Polo has returned to his representational roots, but this time with an eye for architecture. He begins with simple, clapboard houses, then moves to a more modernist architecture, with ribbon windows reminiscent of the work of Le Corbusier. In his latest piece in this series, he melds together two worlds: on the right, a sleepy, dusty, turn-of-the-century train depot, the only architectural features the bold black power lines leading away from the viewer. On the left is a jazzy city scene with echoes of Jacob Lawrence and Piet Mondrian, with bold colorblocked buildings and a zebra-stripe crosswalk, skyscrapers poking up in the distance. 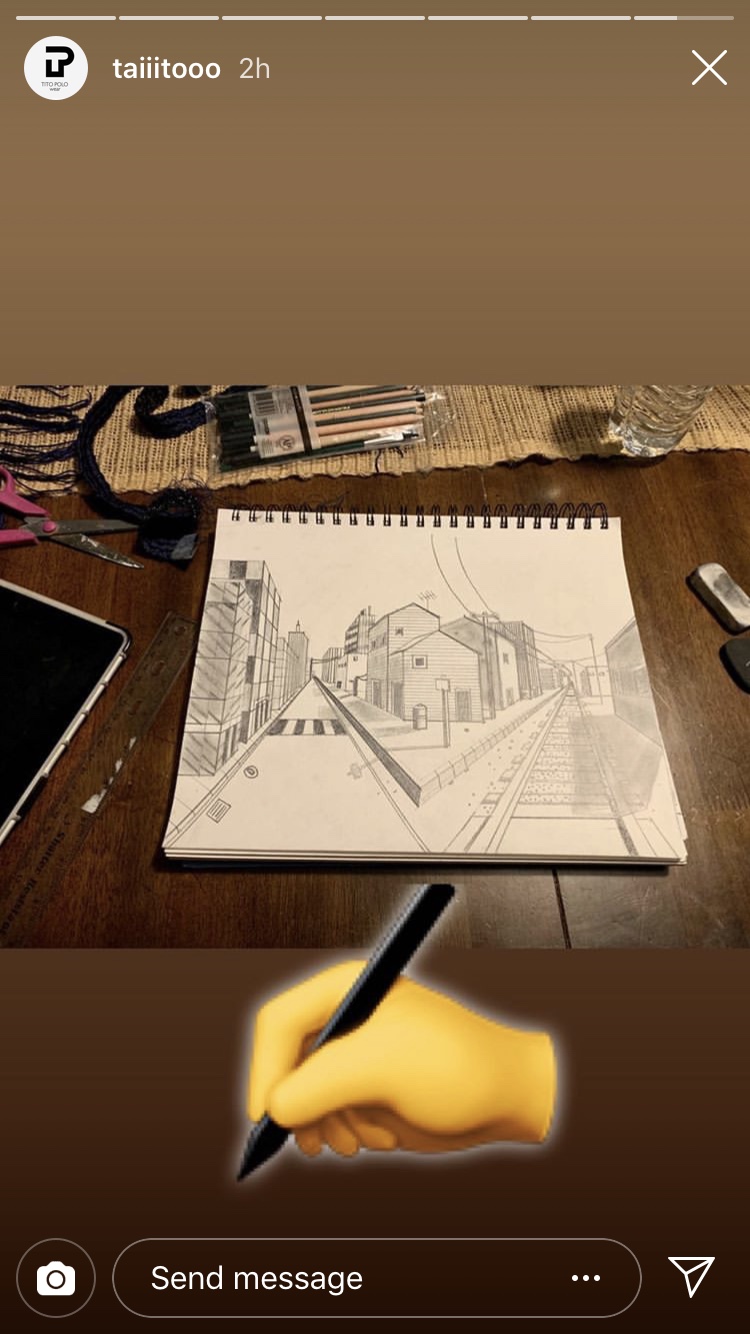 It’s an image of two worlds for a player who lives in two places: the white-sand beaches of San Andrés and the harsh desert night, someone caught between his big-league dreams and another season of minor-league ball played on dusty fields in tiny towns, the only scenery the heavy black power lines marking out the distance, telling you to go, go, go. 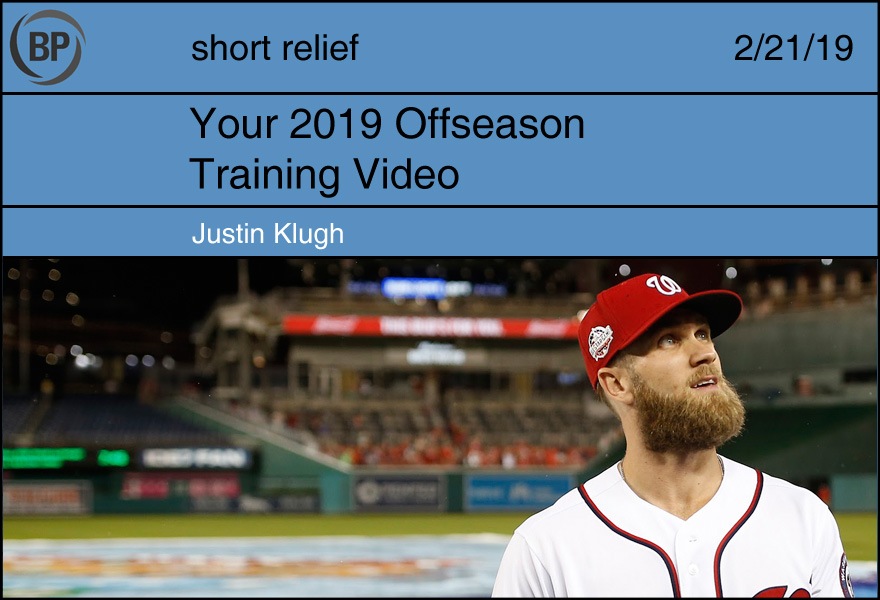 What follows is the transcription of a baseball video that went unreleased by the league, entitled “What to do when a megastar won’t play in your town.” Names of cities and players have been removed to give the material a timeless quality.

TEDDY: Yeah! I know the players are down at spring training, but I’m ready to see some real games!

NARRATOR: Oh, really? Say, aren’t you a fan of the [MEDIOCRE TEAM]? They’re lousy! What’s there to get excited about?

TEDDY: I sure am a [VERY DECENT, VERY DULL TEAM] fan, through and through! And I’m excited because this year’s gonna be different!

NARRATOR: Oh, yeah? And just why in the heck is that?

TEDDY: Because they’re gonna sign a big star player. You know, one of those players who can hit, and field, and run, and throw, and they just give him whatever money he wants to switch teams. At least, I think that’s how it works!

NARRATOR: No one really knows how these things happen, or don’t happen! That’s not for us peons to think about! We just know it’s not the result of owner collusion.

TEDDY: I think a lot of people know how player signings happen.

NARRATOR: Well that’s great! Say, I’ve got some bad news for you, Teddy! No superstar will ever want to play in [FAIR TO MIDDLING AMERICAN CITY]! Not when [SEXY BEACH CITY] and [ONE OF THESE TERRIBLE NORTHEAST CITIES WHERE THE PEOPLE LICK WALL SOCKETS FOR WARMTH] are available to him!

TEDDY: Why not?! [CITY WITH A NAME BUT NO IDENTITY] is as good a place as any! You gotta problem with my town?!

NARRATOR: Me? Of course not! But [VERY YOUNG, VERY RICH ATHLETE] might have one! He’s waiting out signing anywhere because he knows [PERFECTLY ACCEPTABLE, IF NOT INSTANTLY LIKABLE PENNSYLVANIA CITY] is his best option and he just doesn’t like it. No one knows why. Maybe it’s the people. Maybe it’s the organization. Hell, maybe it’s you, Teddy.

TEDDY: So, what am I supposed to do? Kick rocks?

NARRATOR: Maybe! Our research shows you kids from ages 5-17 love rock-kicking! Or, you could see if there is anyone on your team already who might also be good! [Leafing through team program] Say, this guy here seems pretty all right!

TEDDY: He hit .238 before his speargun accident last year!

NARRATOR: Oooh. Well, why not admire the beauty in the game itself? Perfectly executed double plays, crisply smacked home runs, operatic defensive shifts. Yes, baseball the pastime is a sight to behold!

TEDDY: Then why do they keep trying to change it?

NARRATOR: Look, kid; there’s just not going to be a [FLASHY OUTFIELDER WITH INCREDIBLE HAIR or THIRD BASEMAN WHO WILL BE KNOWN FOR HUSTLING COMMENTS FOREVER] in every town. That’s part of what makes them so special, and what makes this such a difficult game. But trust me, you don’t want national attention on your town and your team all summer long.

TEDDY: I think I do.

NARRATOR: Sure, you say that now. But let’s say some poor owner forks over a couple hundred million dollars of his hard-inherited cornmeal empire fortune, and the so-called “megastar” isn’t an instant success? What if that same perfectly likable owner thinks he’s acquiring a generational talent in his prime, only to see him slack off once he gets his money?

NARRATOR: Well, it’s not gonna happen this time. But don’t worry, soon there will be a whole other class of [EXTREMELY COOL BASEBALL PLAYERS NOT PLAYING BASEBALL WHILE THEY WAIT FOR A DEAL], assuming they aren’t locked up by their current teams before then, and we will get to do all of this again! In the meantime, why not embrace baseball for the sudden fluidity of its rules, its personable, relatable owners, and its completely collusion-free atmosphere as we think about the offseasons to come!

NARRATOR: It is. The NBA is very cool.

TEDDY: Hey, how did you know my name?