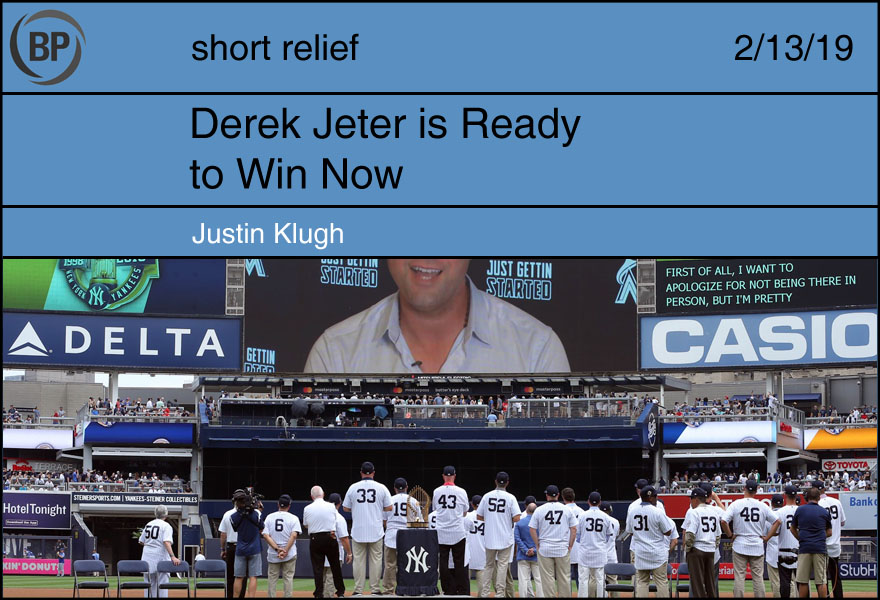 You didn’t know this, but Derek Jeter has never played in a baseball game on a losing team. When Derek Jeter scratches off a losing lottery ticket, he responds, “No,” and eats it like a hamster. If you are dining with Derek Jeter and finish before him, he quietly orders two more entrees and begins the meal again.

This may sound like the indecipherable acts of a madman, but this is simply what winners do. Any winner will tell you: Sometimes, winning just means refusing to lose, refusing the concept of losing, until your competition is so confused or put off they make up a polite excuse and leave.

Derek Jeter doesn’t have to become a good owner with the Marlins. He just has to wait–and not much longer. Because baseball will just say he is one, regardless of what happens next. They certainly won’t say that he’s not.

You’ve had your fun. You’ve gotten to watch as Jeter fumbled through some really bad trades, swapping out two consecutive league MVPs, banishing the Home Run Sculpture, and getting dressed down by Marlins Man. Now, we are on the cusp of the Derek Jeter Redemption Story.

“What?” you squawk, dropping a full tray of ice cubes. “What does he need to be redeemed for? He’s a 14-time All-Star with a jump-throw that changed the game. I mean, jumping and throwing? Who else would have put those two things together? This is the man Rick Reilly called, ‘George Clooney in pinstripes.’ The man Richard Justice said, ‘did every single thing right from the beginning.’ The man who handed a baseball to a child and the New York Post called him ‘intangibles-made-sentient.’ It was always going to take more than the torpedoing of a non-Yankees franchise to ruin his reputation.”

Baseball allowed the narrative of “Derek Jeter: Legendary player, legendarily bad owner” to develop, just so his biopic can have a dark chapter, but it’s not going to let that go on much longer.

Jeter fired his last good player into the sun in the J.T. Realmuto trade with Philadelphia, and minutes later, reports indicated that he wanted to win. His faith will not be in the player development process they have in Miami, which I’m guessing is a pair of Giancarlo Stanton’s old batting gloves in a jar of science goo, but rather in the redemption arc he will be granted as he begins his quest for a World Series title in Miami just in time for his name to start appearing on Hall of Fame ballots.

It won’t take much to change the story: a hot April, the acquisition of anybody, a revisitation of his desire to win, and suddenly, Jeter will not only be viewed as the game’s premiere owner, but all of the moves at which we are now shaking our ignorant heads will be viewed as genius in retrospect, all of them being made with a long game in mind that we were just simply too stupid to see. And then, Jeter will be a winner again, even after the Marlins lose 40 games down the stretch. He’ll have beaten the very favorable odds that baseball will caress his face with praise again.

Yes, it won’t be long now. Because, as he announced this week, Derek Jeter is ready to win again. 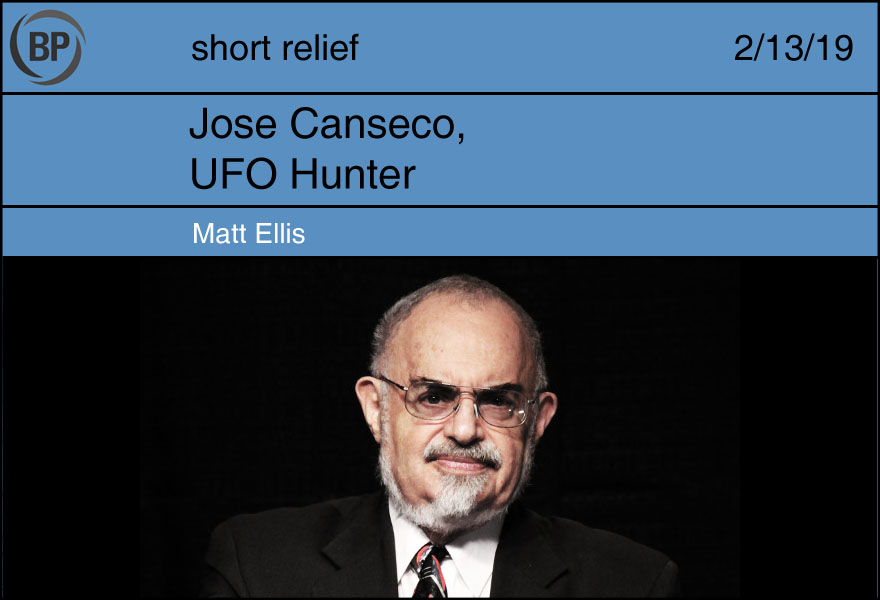 I tried calling Jose Canseco’s supposed agent at Morgan Management to find out what his latest UFO research has uncovered, but unfortunately it went straight to voicemail. Nevertheless, and with the caveat that it seems clear Canseco is producing a media persona in order to write viral tweets–a topic I have already covered here at Baseball Prospectus–we can’t let this one simply go by untouched upon.

I on the other hand have a few questions: 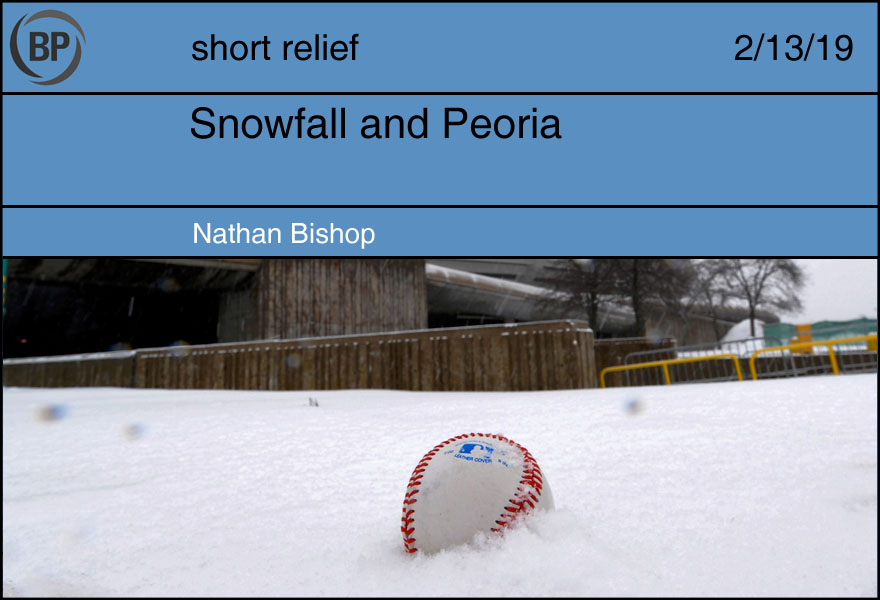 On Monday Mariner pitchers and catchers reported to the Elephant Bar-lined field complex in Peoria, AZ. I read the news in my living room, as the greatest snowstorm in half a century blanketed the northwest. As a child, snow and Spring Training contained magical elements. One promised missed school, sledding with friends, and hot chocolate by a fire. The other promised, well, baseball! For a child like me nothing was more magical than baseball.

As I’ve aged I’ve come to accept that part of growing older is seeing less magic in the world. A snowstorm is now no longer the promise of slip slidey-hijinks, but rather a cocktail of mounting workload, cabin fever, dwindling food supplies, dangerous roads, power outages, and fear of property damage. Mystical qualities, it turns out, are easily cancelled out by an hour or so shoveling snow off a roof.

Baseball, though: Baseball’s magic has lingered. Through PEDs, labor wars, franchise relocations, and rooting for the Seattle Mariners, the sport’s ability to Ken Burns-ify itself to me has never really failed. With baseball, the thing itself was never necessary. All I needed was the promise that I would have it within a reasonable amount of time, and that was the magic of pitchers and catchers.

So as the blizzard raged outside, I read that Marco Gonzales and Wade LeBlanc had dutifully reported to do…whatever it is baseball players do to report to Spring Training. What do they do, I wonder? Is there an official sign in sheet? Do they get a badge? Are they immediately ushered into a full physical, as every inch of their increasingly de-valued bodies are poked and prodded? Do they swear fealty to the team’s logo in an ornate and tradition-rich ceremony? Regardless of the procedure my reaction was a panic-inducing level of ambivalence. Here was My Sport, the game I have loved since birth, and the promise of its return left me flat lined?

I guess the question as we grow older is less how to re-capture the feelings we felt as young people, and more what we choose to hold onto today to make things worthwhile. Snow and Spring Training don’t do it for me anymore, and that’s something I’ll have to accept. Maybe I’ll find it at the ballpark this year, on a Dustin Ackley groundball through the hole, or Jay Bruce hitting Edwin Encarnacion with a pie after a walk-off home run in May. I hope so, and that hope will hold me here. For now.

You need to be logged in to comment. Login or Subscribe
Peter Collery
I'm not sure what it means to say that 29 teams have not offered Bryce Harper a contract. I feel certain that 10 teams would eagerly pay him, say, $25 million a year for 5 years, and that he knows that. Had these 10 actually tendered contracts on these terms, would you feel better?
Reply to Peter