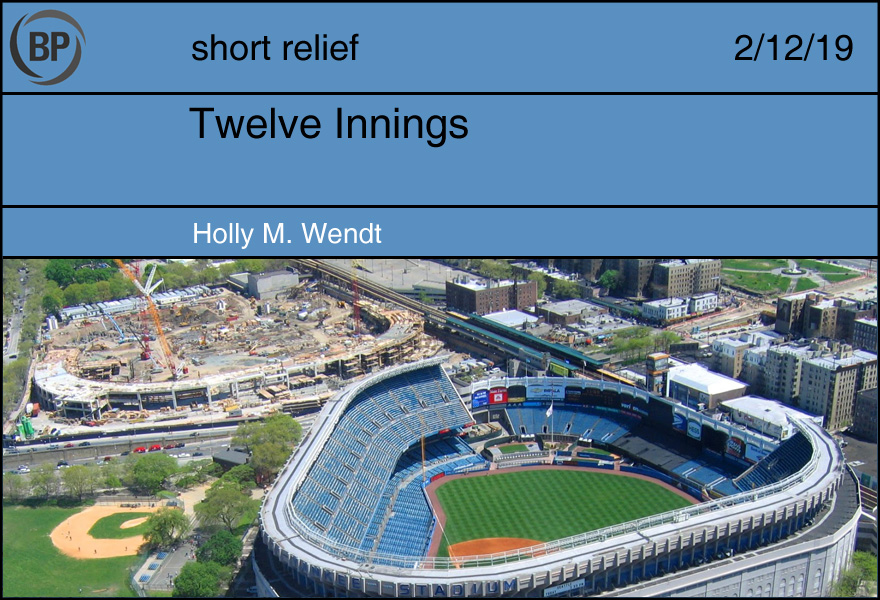 On July 19, 2008, on the seemingly hottest day of that summer, I stepped into Yankee Stadium for the first time. It would also be the last time, too; new Yankee Stadium was already nearly complete across the street, and The House That Ruth Built would close its gates forever at the season’s end. This was a family pilgrimage not of Yankees fans, but of baseball fans; we couldn’t let this historic monument shutter without visiting at least once.

This was the summer before I would begin the final year of my doctoral program. I was working on my dissertation in the mornings before my shifts in the local zoo’s ticket booth and petting yard, watching the job lists that would shrink and shrink under the accelerating recession, getting ready to begin applying in September to positions that would take months to respond, if at all. Sometimes, despite the labor-intensive process of applying to academic jobs—frequently, at that time, involving one to three thousand words of customized responses to institution-specific prompts, the invention of syllabi for hypothetical classes, and the costly process of having a dossier service submit letters of recommendation and transcripts—the positions would be closed without a single interview scheduled or, worse, after interviewees incurred the expense of the MLA Convention—as institutions found their budgets slashed.

While I settled into my molded plastic seat, though, and felt the sweat run freely between my shoulder blades, I didn’t know all that exactly. What I knew was that I was in the stadium where Lou Gehrig had played, where Lou Gehrig had become the nonpareil of both skill and virtue in my life as a young baseball fan raised by blue-collar parents who didn’t take sick days and who didn’t call off for weather even when they really should have. We loved the Phillies that we had—and 2008 gave us so much to love—but my childhood baseball mythology was Murderers Row and the deity on first base who didn’t miss a game.

That day, Gehrig was only present in Monument Park and, upsettingly, in the feeling that I should have been writing instead because a dissertation won’t write itself, and the humid air seemed as solid as the plaques. The more lasting memory is of the crush of people in the concourse’s shade, the heat radiating into and out from everything. My stress-tight neck loosened enough to arc with Robinson Cano’s two doubles from bat to outfield, to shift smaller as Alex Rodriguez took two free passes to first. If I wasn’t drafting that all-important document or putting hours on the clock at my summer job, at least I should pay attention. But everyone struggled. The whole stadium seemed to slump into the day’s simmering syrup, the hoped-for fireworks from the Yankees lineup never launching. The torpor deepened when Mariano Rivera coughed up a rare run to give Oakland the lead in the top of the 9th and then, strangely, sank further—it felt—when Huston Street gave up the tying run to a Wilson Betemit double. It should have been a moment for triumph, but it only meant a longer stew in the pungent confines.

In the twelfth inning, with the bases loaded, Oakland reliever Lenny DiNardo plunked Jose Molina, and the game wobbled to its conclusion with a walk-off HBP. Whatever remained of what had been a crowd of 54,000 sighed and clapped briefly for their home team, then staggered out after nearly five hours in purgatory.

It’s been more than ten years since that game. Sometimes when I tell this story, it comes out funny, the sheer anticlimax of the whole thing turned to Beckett-like absurdity, and I wish I could have told it that way here. But my mom retired from thirty-nine years at her difficult and physically deleterious factory job just a week ago and what I’m remembering is how the feeling of ingratitude—manifested in relief to be leaving despite the anticipation of finally being there—was so much like shame, like wasting all the work that had paid for the tickets: not only my sad TA salary and summer job at the local zoo, but also my spouse’s frustrating warehouse hours and my parents’ constant labor. Watching baseball wasn’t supposed to feel like work, but that afternoon, against all sense, is all that it felt like. 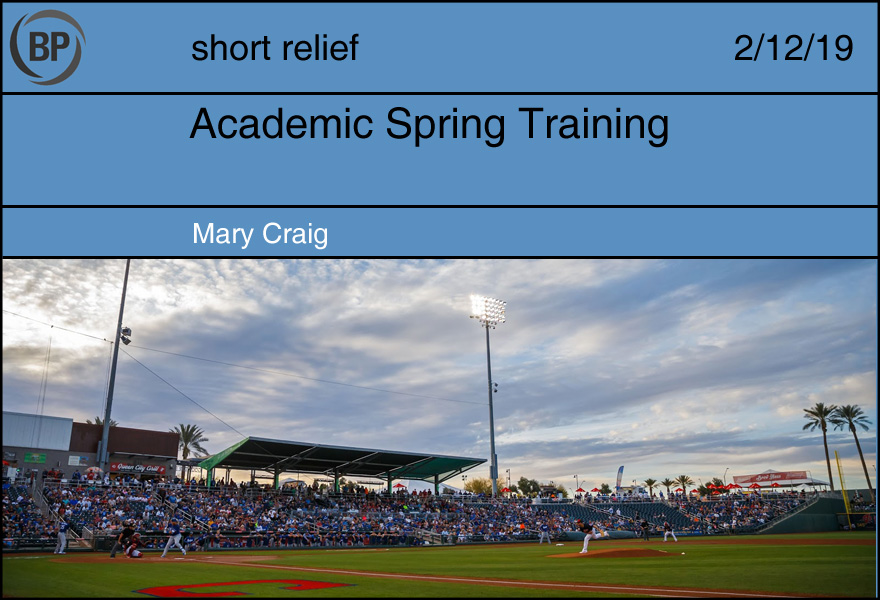 Over the next two weeks, as players report to Spring Training and ramp up preparation for the arduous season ahead, I myself will be participating in something of a Spring Training. Every February, my grad school’s program invites prospective students for a couple of days in order to better see how they might fit into the program. This trial period includes attending classes, having a formal interview with the admissions committee, and socializing with those already in the program as much as possible.

For prospective students new to the area and desperately trying to earn a roster spot, these two days are about as nerve-wracking and exhausting as possible. The work they’ve put in throughout their lives suddenly seems insufficient, particularly when faced with a group of people who are at least as qualified as they are. They’re suddenly faced with the idea that no longer will they be one of the best among their peers. Indeed, were they to join the program, they may be one of the worst. Of course, at this level of academia, the concepts of ‘good’ and ‘bad’ are heavily skewed; the division between good and bad (with exceptions, of course) is condensed, with ‘bad’ becoming something like “not quite as good as The Best.”

For those of us safely in the program, these days are all about up-front reassurance and covert evaluation. Many prospective students have applied to multiple programs and will be accepted into multiple programs. They’re something of a free agent class, and so it becomes our job to sell the program to them. Within this, though, is a genuine concern to determine what is fitting for each applicant; we all believe our program is the best, but we also recognize it may not be the best for all.

Within a group that’s fairly equal in skill, much of the determining factor with regard to what is fitting is personality. The amount that personality truly matters is quite subjective, but with the amount of time we spend around one another, it’s at least preferable to be able to get along. And so in small conversations here and there over roughly 48 hours, we each attempt to figure out whose sense of human and outlook on life are compatible with the program’s. All is scouting.

Relative to the ensuing five years, these 48 hours mean little, but in the heat of the moment, they mean everything. 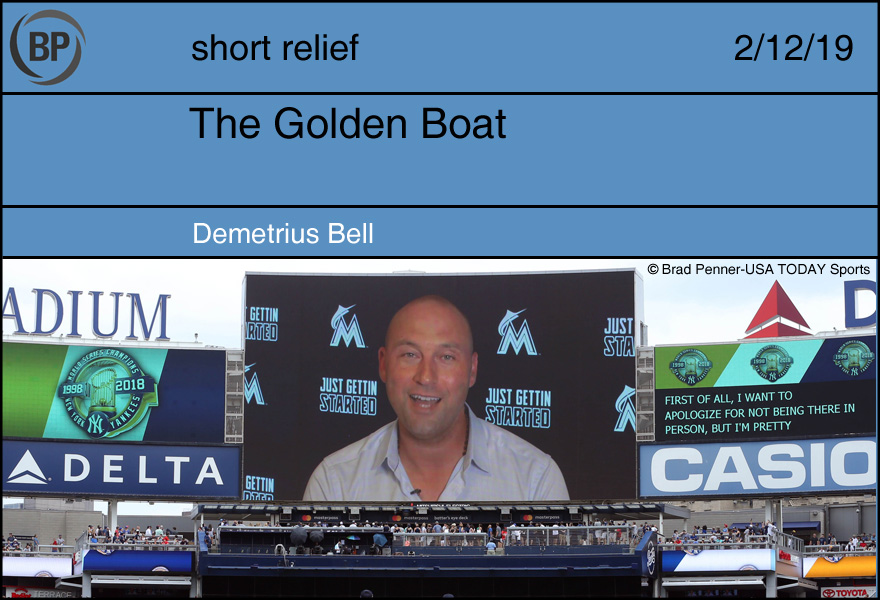 This is one of the happier weeks on the calendar when it comes to baseball. Even though they lost out on Kyler Murray, Oakland A’s fans can at least take solace in the fact that their pitchers and catchers reported for spring training. Two more teams are reporting today, and the rest of baseball’s batteries will soon be flooding into facilities in Arizona and Florida to start getting ready for the 2019 season.

Still, there’s a bit of a dark cloud looming over baseball. We’ve reached this checkpoint during the year, and yet there are still plenty of free agents out there and the quality of these players is good enough to where our robot overlord PECOTA believes this band of baseball orphans could possibly make a run at the playoffs. That list will dwindle as we get deeper into spring training, but it’s still kind of wild that this sort of experiment was feasible for a second season in a row.

It’s going to be fun when we see baseball finally start to wake from its hibernation and make moves, but it’s also weird to see some teams and their reasoning behind not going after Manny Machado or Bryce Harper. For instance, Miami Marlins ownership claims that it has “No patience” and “wants to win now.” While it’s understandable that they’re currently rebuilding, you’d think that if Mr. Jeter is that impatient and has such a thirst for winning, he would have told his baseball operations to add talent to the squad that he inherited upon getting in charge. (Or not trade away all his All-Stars in the first place.) That could have put the Marlins in position to possibly position themselves to make a run at adding one of the premier free agents of this offseason, but maybe we’ll see them go on a shopping spree in the 2020s?

While it’s understandable to see a rebuilding team staying away, it’s another to see a team that figures to be in the thick of things just decide to pass on players like that. Mets GM Brodie Van Wagenen recently told WFAN that none of Machado or Harper would be “the best fit for us.” That’s where we’re at right now. It’s as if you’re telling people to choose between a boat made out of gold or whatever is under a small cardboard box and people are choosing the box because the keys to the gold boat could be in there.

Personally, I’d take the gold boat ten times out of ten, but I guess that’s why I’m just a fan instead of actually working in the game. I’m also a fan of fun in general, and if we’re being real, this hasn’t been the most fun offseason. The good news is that it won’t stay like this for long. Again, spring training is about to get underway and Opening Day will be here before you know it. As far as right now goes, I just want someone to take the gold boat and get the ball rolling for this upcoming season.