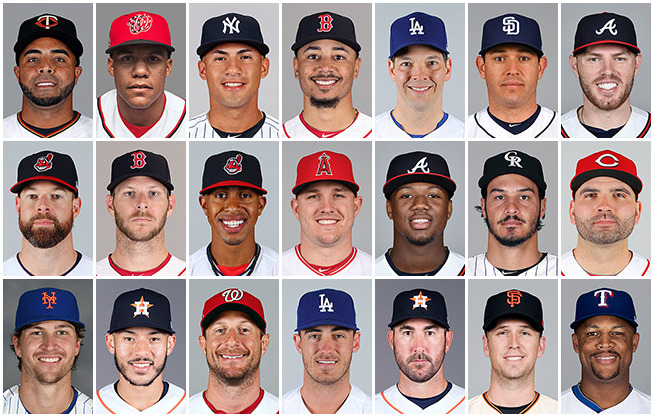 Who is the best player in baseball for each age group? PECOTA projections came out yesterday, so let’s use the projected WARP totals for this season as our main guide while also leaving a little room for subjectivity if/when it seems necessary.

Juan Soto had one of the greatest age-19 seasons ever, joining the Nationals in mid-May and hitting .292/.406/.517 in 116 games. Meanwhile, the Blue Jays left their own 19-year-old phenom, Vladimir Guerrero Jr., in the minors for the entire season and figure to keep him there to begin this season as well. That’s noteworthy because, while PECOTA loves Soto—projecting a tremendous sophomore season and populating his top-comps list with names like Bryce Harper, Mike Trout, and Ken Griffey Jr.—the system is head over heels for Guerrero. However, since Guerrero is likely to spend time in the minors, Soto is projected to receive more plate appearances and, thanks to that extra playing time, generate slightly more WARP.

Honorable mention: Guerrero. There’s certainly an argument for picking Guerrero, whom PECOTA projects as the 10th-best hitter in the majors before he’s even gotten there, but a) Soto is an amazing 20-year-old, and b) please direct your anger at the Blue Jays rather than at me.

Ronald Acuna beat out Soto for Rookie of the Year, which should tell you plenty after reading the previous entry. This time last year Acuna was where Guerrero is right now, the no. 1 prospect in baseball and yet to debut for the Braves. He arrived in late April and hit .293/.366/.552 in 111 games, blowing away what had seemed like a very optimistic projection. PECOTA was a believer then and that certainly hasn’t changed, although some regression is naturally expected and the system views his defense unfavorably. Acuna’s top same-age comps are Trout and Harper.

Honorable mention: In addition to Albies and Devers, this age group is home to top-10 prospects Eloy Jimenez (White Sox), Victor Robles (Nationals), and Keston Hiura (Brewers). Oh, and despite seemingly being around forever, Julio Urias (Dodgers) is somehow still only 22.

Cody Bellinger had a disappointing 2018 season, at least relative to his spectacular debut, but PECOTA still thinks this is a pretty easy call in favor a guy who hit .260/.343/.470 and proved to be a reasonable defensive option in center field as a 22-year-old.

Honorable mention: Jack Flaherty has the next-highest projected WARP for this age group and, as Zach Crizer wrote about extensively yesterday, PECOTA thinks Adalberto Mondesi is a very rare talent.

PECOTA sees Carlos Correa bouncing back fully following an injury filled 2018 season in which his OPS dropped more than 200 points, projecting him as the third-best shortstop in baseball. If healthy, Shohei Ohtani may have been my pick here, but the BP Annual cover model will be limited to hitting only as he recovers from elbow surgery and he’s expected to begin the season the disabled list.

Honorable mention: Andrew Benintendi has established himself as a great all-around player and had a better 2018 than Correa. Red Sox fans will also be pleased to see that Benintendi’s top same-age comp is none other than outfield-mate Mookie Betts. German Marquez and Walker Buehler are the standout age-24 pitchers while Ohtani rehabs.

Alex Bregman is also an acceptable answer here, as PECOTA projects both Bregman and Francisco Lindor among the 10 best all-around players in baseball. Bregman narrowly beat Lindor in WARP last season and finished one spot in front of him in the MVP voting, but Lindor gets the slight nod for 2019 because only Trout and Betts project better.

Honorable mention: Bregman is incredible. Please don’t send me nasty tweets if he wins MVP this season. I’ve been on the bandwagon for a while. On the pitching side, the age-25 group is home to arguably baseball’s two best relievers, Edwin Diaz and Josh Hader, plus standout starters Luis Severino and Jose Berrios. And before blowing out his elbow, Corey Seager was very much in the mix with Lindor and Bregman for the top spot.

Mookie Betts went from superstar to superduperstar last season and PECOTA now views the reigning AL MVP as the second-best player in baseball behind only Trout. Given how much the projection system has (rightfully) loved Trout since he was basically a zygote, that’s quite a feat.

Honorable mention: Christian Yelich is the reigning NL MVP, Aaron Judge projects as the fifth-best player in baseball, and Kris Bryant projects as the fourth-best third baseman, but for these purposes they picked the wrong year to be born.

Deserved Runs Created, our new all-encompassing hitting metric, takes a more nuanced view of Coors Field and in doing so places Nolan Arenado on a higher pedestal than ever. PECOTA projects him as the sixth-best all-around player in baseball, combining a top-15 bat with plus-plus defense at third base.

Honorable mention: Philadelphia bound J.T. Realmuto is PECOTA’s pick as the best under-30 catcher in baseball and the projection system buys fully into Gerrit Cole‘s breakout with the Astros.

PECOTA sees this as a virtual toss-up among Jose Altuve, Anthony Rizzo, and Freddie Freeman, with Giancarlo Stanton a half-step back as well. Using last season’s WARP as the tie-breaker gives Freeman the nod, but I’d have zero problem ranking those four in any order.

Honorable mention: I think Anthony Rendon is generally extremely underrated, so this is simply me mentioning him in a stacked age group.

You may have noticed that every age group’s top spot went to a hitter until now, which has been the case in previous years doing this exercise as well. That might have something to do with a PECOTA bias, or maybe my own bias, but I think it speaks to how hitters and pitchers develop and age. This season, the average age of the 10 best-projected hitters is 28 and seven of the 10 are in their twenties. However, for the 10 best-projected pitchers the average age is 31 and seven of the top 10 are in their thirties. Chris Sale is the best pitcher in baseball, according to PECOTA, and the gap between his projected WARP and the no. 2 pitcher’s projected WARP is larger than the gap between no. 2 and no. 18.

Honorable mention: James Paxton, Stephen Strasburg, and Yasmani Grandal are all great, but this is no contest.

Clayton Kershaw was the king of his age group for a decade, but after displaying some seemingly obvious signs of decline last season PECOTA now projects him as merely the fifth-best 31-year-old and the clear no. 2 pitcher behind reigning Cy Young winner Jacob DeGrom.

Honorable mention: Paul Goldschmidt and J.D. Martinez have reasonable arguments for this spot if you aren’t worried about furthering that whole anti-pitcher bias, and PECOTA wants me to remind you that it still likes Justin Upton an awful lot.

Buster Posey is coming off his worst full season, at an age when catchers tend to decline rapidly, but PECOTA still views him as the best catcher in baseball and a top-20 player overall.

Klubot is projected for twice the WARP of the next-best 33-year-old pitcher.

Scherzbot is projected for four times the WARP of the next-best 34-year-old pitcher.

PECOTA projects Joey Votto as the fourth-best hitter in baseball and he joins Trout as the only hitters projected to top a .400 on-base percentage. Ignoring an injury wrecked 2014 campaign, it would be his 10th straight season with a .400-plus OBP.

Ian Kinsler is the only 37-year-old projected to reach 1.0 WARP, and even that is just barely.

Nelson Cruz is the only 37-and-over player projected for more than 1.9 WARP and PECOTA thinks he’ll post 3.4 as the 16th-best hitter in baseball. At this point, he might as well remain an elite hitter until the National League adopts the designated hitter, so he can finally terrorize that league too.

Imagine telling someone in … well, basically any year from 2000-2015, that Rich Hill would still be pitching at age 39 and he’d easily beat Albert Pujols for the age group’s top spot.

Honorable mention: Pujols, or at least what’s left of him.

This is admittedly cheating, but I just wanted one more opportunity to say how great Adrian Beltre was, and how much fun he was to watch. PECOTA is convinced that if he reconsidered retirement, he’d still be an above-average starting third baseman. I hope he enjoys retirement and never has to be in another GIF involving someone touching his head.

You need to be logged in to comment. Login or Subscribe
Anthony Worrall
Aaron how the hell is Sale younger than DeGrom, he's been here forever. You just blew up my head, but I checked and your right!!! my heavens I just drafted DeGrom in a dynasty league.I thought he was about 28 , How stupid am I. HA
Reply to Anthony