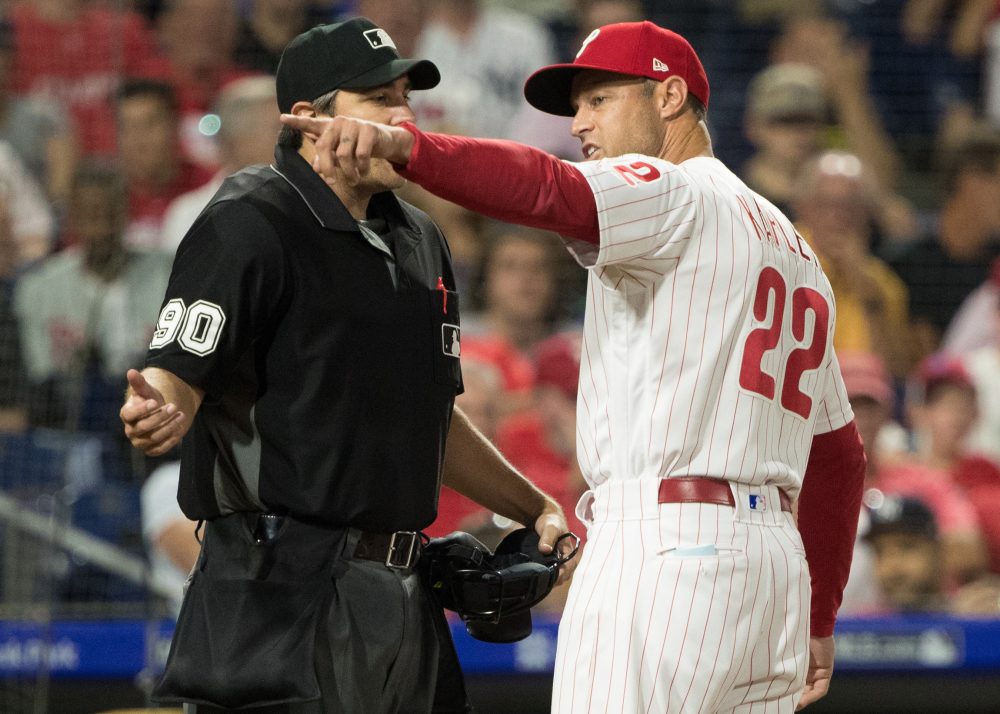 The Mets and Nationals project to run neck-and-neck for the lead in a tough National League East this season, according to PECOTA. The Braves, the defending division champs, are right on their heels. For so much of last season, though, it looked like the ascendant team in that division was the Phillies. Even after their disappointing slump down the stretch, they announced (literally) their intention to move to the front of the pack by the time Opening Day comes.

As of now, that bold intention hasn’t amounted to much: PECOTA pegs Philadelphia for 84 wins and a tie with Atlanta for third place, which would be a bitter disappointment for Phillies fans. Of course, that could still change, drastically. In all the talk about whether Manny Machado or Bryce Harper would sign by Super Bowl Sunday, or by the time pitchers and catchers report, the question of whether or not they would sign by PECOTA Day got lost. Now it’s here, and neither of the young megastars have yet inked a megadeal.

For that matter, neither have Dallas Keuchel or Craig Kimbrel. The winter’s best trade candidate, Marlins catcher J.T. Realmuto, also remains in limbo. There’s still time for the Phillies to emerge as, if not the clear favorites in their division, then at least a true peer of Washington and New York. The spotlight is getting awfully hot, though. If general manager Matt Klentak and company can’t close the deal on at least one of those big names, they’re going to enter the season as the fourth-best team in a strong division. The stakes of this final phase of the offseason are higher for this team than for any other.

It sure seems as though the Machado sweepstakes boils down to a three-team tussle. The Phillies and White Sox have been involved all winter, hosting the slugging infielder for long meetings and making concrete offers (though the reportage on those offers has been a bit less than concrete). Lately, the Padres have leapt into the fray, taking the place of the Yankees and other fringe suitors who quickly elected to resolve their vacancies in other ways.

Funnily enough, it seemed as though Philadelphia turned its focus to Harper just when the door seemed widest for them with Machado. Maybe they got a demand they didn’t like from agent Dan Lozano, or maybe other moves they made changed their mindset, but it hasn’t felt like Machado is the top priority for them for the last few weeks.

Let’s imagine a scenario in which that changes, though, and the Phillies sign Machado. They’d be likely to play him at third base, where Maikel Franco’s inconsistency has been as maddening as his talent is tantalizing, thus leaving Jean Segura at shortstop and Cesar Hernandez at second base. Per the hot-off-the-presses PECOTA projections, that would be an enormous upgrade, both offensively and defensively.

That Machado projection does not include any adjustments for the specific run environment of Citizens Bank Park, and it estimates his value if he plays third base virtually every day and is an average fielder, so if anything it might be conservative. Even so, that’s a stark difference, and it would cause a similar shakeup in the Philadelphia lineup, which is currently projected for an anemic 91 DRC+ overall.

There are drawbacks to this course of action, however. A Machado-infused Phillies lineup would still lean pretty heavily toward right-handedness. Machado might accept the move back to third base, but he’s made it clear he’d prefer to be a shortstop. It’s possible that being shoved back to the hot corner would lead to lapses in focus or effort, both of which have been question marks for Machado in the recent past, anyway.

Presumably, too, such a move would effectively mark the end of the Phillies’ offseason. Anything they might get for Franco in a trade (with, perhaps, the spurned Padres or White Sox) would likely be unexciting, since the reasons they want to replace him are largely public knowledge. This move would close the projected gap between the division leaders and the Phillies from five games to about one and a half, but it wouldn’t put the Phillies over the top.

Recent reports suggest that Harper is further from a decision than is Machado, mostly because there are more teams still trying to work their way in and make a surprising scoop. Harper has very little baggage in terms of personality or makeup, which helps open avenues for him, but he’s also easier to fit into an already-solid lineup, because most teams have at least one hole in their outfield.

Philadelphia signing Harper would likely mean shoving Nick Williams aside. That’s not the end of the world. It’s easy to see Williams’ sheer hitting talent and athleticism, at times, but he’s played 223 games and batted 791 times in the majors, and there is not one thing there to like. He’s been a dreadful fielder, confined to an outfield corner. He’s a below-average baserunner. His approach at the plate is a mess. Worst of all, these are all flaws that have been obvious since he first showed up on prospect radar, in the Rangers’ system, and certainly since the Phillies acquired him in the Cole Hamels deal in 2015. The hope was always that his tools would outshine his lack of refinement, or help it ameliorate itself. That hasn’t happened.

This option would, in theory, put the Phillies right back at the top of the mountain. It’d balance their lineup nicely, adding a needed complement to the streakiness of Odubel Herrera. On its own, however, it wouldn’t set the story of the 2019 NL East on its ear. We already believe the Phillies are close to the other three teams in the struggle for primacy; this would put them more clearly in that tier.

If the Phillies trade for Realmuto …

According to Tim Brown of Yahoo Sports, Philadelphia could be pushing its way into the inner circle of teams trying to pry the best catcher in baseball away from Miami. That might not be entirely true. The Marlins were, according to more widely-spread and more consistent reports, inching toward a Realmuto deal with the Reds over the weekend, and the stage those two teams have reached with regard to such a deal could have led a Miami official to go looking for some way to apply pressure or gain leverage in an ongoing negotiation.

If it isn’t true that a Realmuto-for-Jorge Alfaro deal is in the works, though, it should be. Alfaro showed the tools in 2018 to be a solid everyday catcher in his own right. Williams, whose flaws I described above, nonetheless offers obvious potential. Using those two as part of a package that lands Realmuto would be a coup, even if it means adding one of the organization’s best prospects to the mix.

Again, the projected production for each player is based on their current home, not a possible new one. Still, the difference is clear. Alfaro is the best pure athlete at the position in baseball, but because Realmuto is such a good handler of pitching staffs, so quick on the exchange when throwing to nab would-be base stealers, and so much better an overall hitter, he’s still far superior to Alfaro.

More importantly, the appeal of a Realmuto deal is that it wouldn’t preclude one of the other aforementioned options. In particular, if it’s true that the Marlins would like to obtain Williams, a Realmuto trade could pave the way to a Harper arrival. At that point, the Phillies’ offense would complete a transformation from just OK to juggernaut, and according to PECOTA they’d be a serious rival to the Dodgers for primacy in the National League overall, let alone the division.

There’s a golden opportunity here, not only to surpass all of their divisional rivals, but to set up the Phillies to be a beloved World Series contender in the short and the medium term. If Klentak takes even partial advantage of that, he’ll come out of his most challenging offseason looking like a hero. If he whiffs on it altogether, he and his team’s fans will deeply regret it.