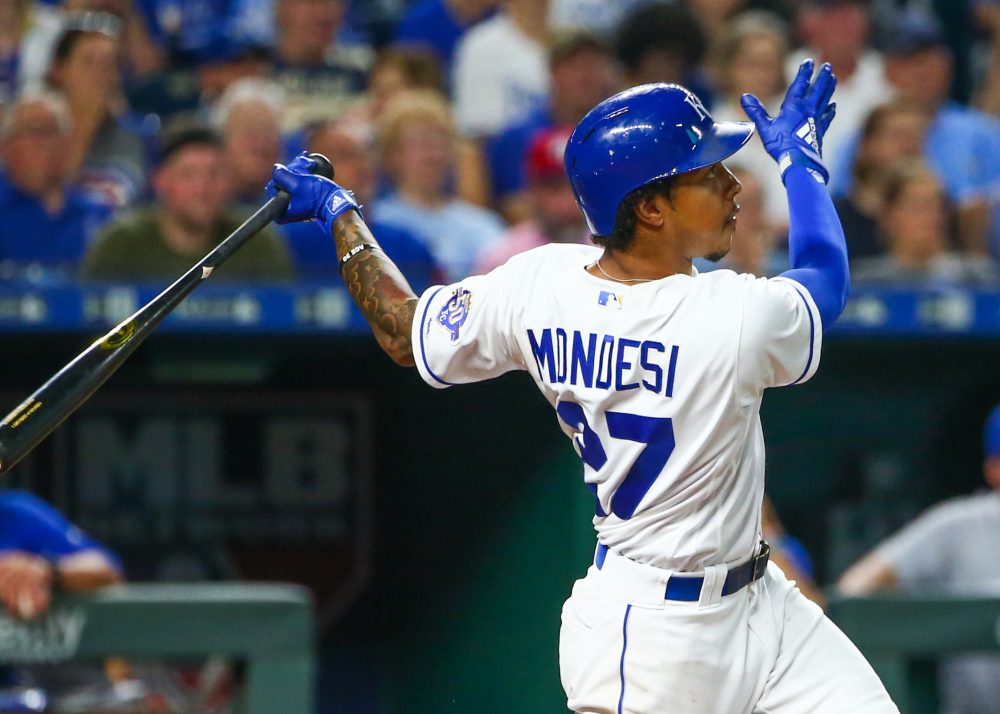 No one has ever hit 15 or more homers and stolen 40 or more bases in a season with an on-base percentage below .300. That’s a reality, a truth you can inspect to your satisfaction. It can’t deceive you. Now look to PECOTA. It says 23-year-old Royals shortstop Adalberto Mondesi will hit 18 homers and steal 43 bases this season despite a .288 OBP. A showman promises invulnerability to the restrictions of history, and it’s willing to believe.

Explanation is the first instinct. Combine two of Mondesi’s three projected numbers, and they aren’t that special, right? There have been 24 seasons of 40-plus steals and sub-.300 OBPs since 1900, though a couple were authored by players used predominantly as pinch-runners. Hitting 15 dingers with an underwater OBP is downright common—407 seasons since 1900, including 24 hitters last year alone.

It’s the third factor, the combination of abilities and ineptitude, that spirals away from reason. Homers and steals feud over a limited pot of opportunities, time crushes in; every roundtrip wipes away another chance to run. Still, the projection is there in plain view: 18 homers, 43 steals, all with a .288 OBP. Never been done, that’s the one certain thing. So what does Mondesi have up his sleeve? 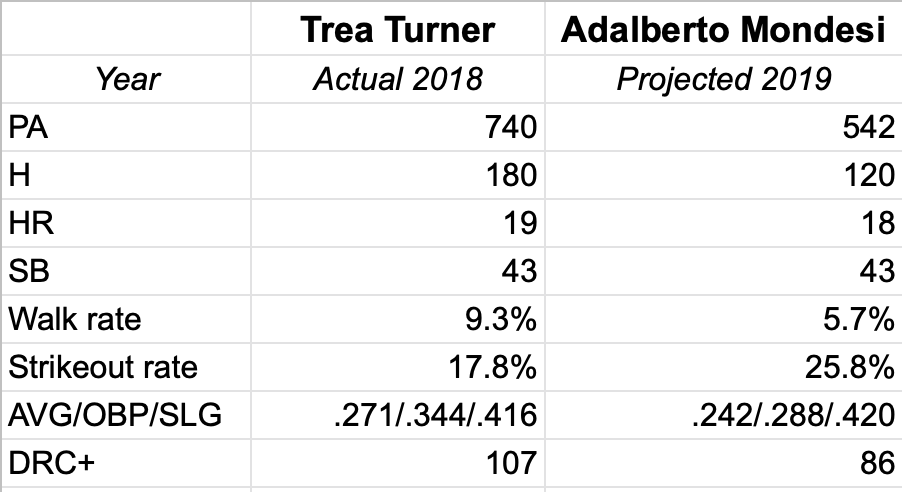 Easy part first: Turner homered in about 2.6 percent of his trips to the plate. Mondesi would need to go deep in 3.3 percent of them—an imminently feasible, 2018 Tim Anderson-esque level of power. As for the steals: Turner posted a .344 OBP, while Mondesi is working with that .288. Plus, a greater chunk of Mondesi’s non-outs will be spent on homers. How tight a squeeze is this?

As a simplistic measure of steal opportunities, start with times on base and subtract homers and triples. Turner had 229 chances, where Mondesi would have 130 by PECOTA’s estimation. There are complicating factors—such as the chance to take second and third base, whether another runner is on base, etc.—but the general picture is clear enough. Mondesi needs at least one stolen base for every three times he lands on first or second base.

Applying this rudimentary opportunities metric to the 1,265 player seasons since 1961 that consisted of 25-plus steals and 400-plus plate appearances (to weed out pinch-running extraordinaires) yields 61 seasons that matched or exceeded Mondesi’s necessary 33 percent rate—and only nine since 2000. So he’ll need to be elite, among the top five percent, the most aggressive and successful base-stealers in the modern game.

He’ll have willing assistants. The Royals as a whole look much like Mondesi, meaning little traffic on the base paths, and more double-steal partners than roadblocks. Situated at the nadir of its competitive cycle, the team will have no reason to suppress his playing time in the way a .288 OBP would suggest, or in the way PECOTA is presuming. Stretching Mondesi’s season to 600 or 650 plate appearances might make it appear less daunting, less incredible, but the trick would be an original nonetheless.

The famed performer named Teller has said magic is “telling a beautiful lie. It lets you see what the world would be like if cause and effect weren’t bound by physics.”

Last season, Mondesi raced to 14 homers and 32 steals in only 291 plate appearances. It came with all the expected red flags, all the questions. There were seven times as many strikeouts as walks. There was an alarmingly low rate of contact. Yet there was an expansion of reality. It was the first time anyone had reached 14 homers and 32 steals in so little playing time.

It wasn’t imitation, couldn’t have been. It wasn’t emulation. More like accumulation, continuation of a 25-year-old’s showing in the Bronx, where he went deep 18 times and nabbed 43 bags—yes, 18 and 43—with a .304 OBP that mattered far less than the tantalizing bursts of energy used to overcome it. Alfonso Soriano was perhaps expanding on the possibility glimpsed in Juan Encarnacion, or strikeout-prone speedster Juan Samuel, or struggling sophomore Andre Dawson.

They weren’t all destined for the same things, but they began with similarly explosive gifts. Casting an unflinching gaze upon what’s known, what’s been done, PECOTA almost always looks toward sturdy ground for the next step. It takes out infrared goggles to find the string, or the trap door. It’s a baseball projection system, built to corral supercharged neurons and overstimulated eyes, to be a killjoy—not to be amazed.

Mondesi’s projection isn’t optimistic. PECOTA (along with other systems) can’t project even passable on-base skills from his track record. It expects him to be a below-average offensive contributor as measured by DRC+. These bursts of the spectacular, however, peek through.

What it’s probably, technically, mathematically, statistically seeing is an advancement in players’ proclivity to drive the ball when they hit the ball, an uptick in efficiency among the game’s most frequent runners. You could choose to see that, too. Or you could see PECOTA having its mind blown by the talent coursing through the game, stretching its internal laws of physics. You could see it as a glimmer in the eye of a friend, experiencing a suspended moment of awe.

You need to be logged in to comment. Login or Subscribe
Shawn Reid
What’s really interesting is how often he runs and how successful he is when doing it.

That includes a handful of pinch running SBs, but you’re talking 3-5 total.

If he reaches on a non HR/3B just 110 times, 45 SB is pretty easy to reach at his career numbers.