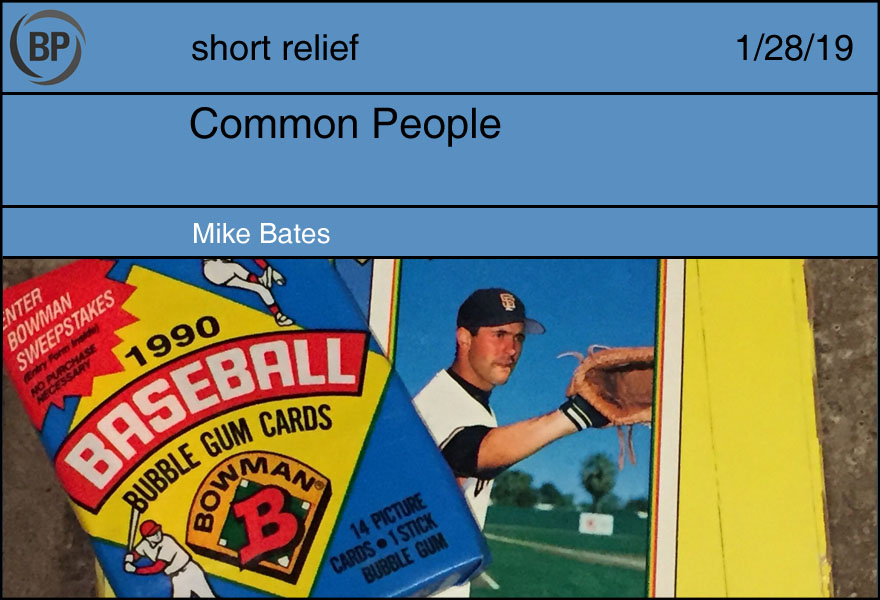 The closest thing in the world to time travel cost me less than ten dollars. But it wasn’t always so cheap.

Once upon a time, as you undoubtedly know, baseball cards were valuable. Growing up in the late ‘80s, everyone heard the rumors and fables of the guy who found his dad’s collection of 1930s Big League Chewing Gum cards hidden in the attic, and the neighbor whose mom threw out all of his old cards from the 1950s (all of which had a Mickey Mantle rookie card). So card producers in that era, seeing a boom in sales, ramped up production to the point where almost every card no longer had any value as anything more than a coaster.

And it probably should be that way. They are functionally worthless. Baseball cards don’t have any utilitarian purpose, they’re fragile and, even in pristine condition and at the height of their popularity, most of them are utterly disposable unless you were really excited about seeing what Bryan Clutterbuck and Rico Petrocelli looked like.

Which is why, when I was at TwinsFest over the weekend, I was able to procure a box of 36 individually wrapped Bowman bubble gum packs from 1990 for the low, low price of eight dollars. It was marked at ten bucks, but when I offered to also buy a set of 1989 Topps Traded, the vendor cut me some slack. And from there, I proceeded to an after-party hosted by Baseball Prospectus editor-in-chief Aaron Gleeman and our mutual friends at Twins Daily, where I handed said bubble gum packs out as party favors, because I wanted to see what would happen.

And here’s what I can tell you: They may be dumb and useless rectangles not worth the cardboard they’re printed on, but they still bring tremendous joy to those who get them.* This is their value. “Oh, giddy-up!” a fifty-year old man shouted when I handed him his pack, which was unnerving. But his unsettling exclamation echoed the enthusiasm of the rest of the recipients, as they ripped into their packs to find skinny Barry Bondses, hand-painted Bo Jacksons, and Rafael Palmeiros who weirdly look exactly the same 30 years ago as he looks today.

*Well, most adults that get them. Nothing brings Gleeman joy.

We seem to all turn into kids again when we open up baseball cards. They are time machines that take us back to our childhoods. We get to wallow self-indulgently in memories of those players, yes, but we also connect emotionally to all those other times we’ve ripped packs.
It’s a moment of both certainty and uncertainty. I’ve always thought it’s like scratching a lottery ticket, except you know you’re going to win something. Even if it’s just Bill Bathe or a Kiki Jones.

And how amazing that, 30 years later, Bill Bathe and Kiki Jones (and Rich Yett and Tim Layana and…) can still bring people joy, long after their bodies have betrayed them and they’ve been forced to join the rest of us who can’t play baseball for a living. What a delightful legacy. And what a delightful medium through which to deliver it…as long as you don’t eat the gum. 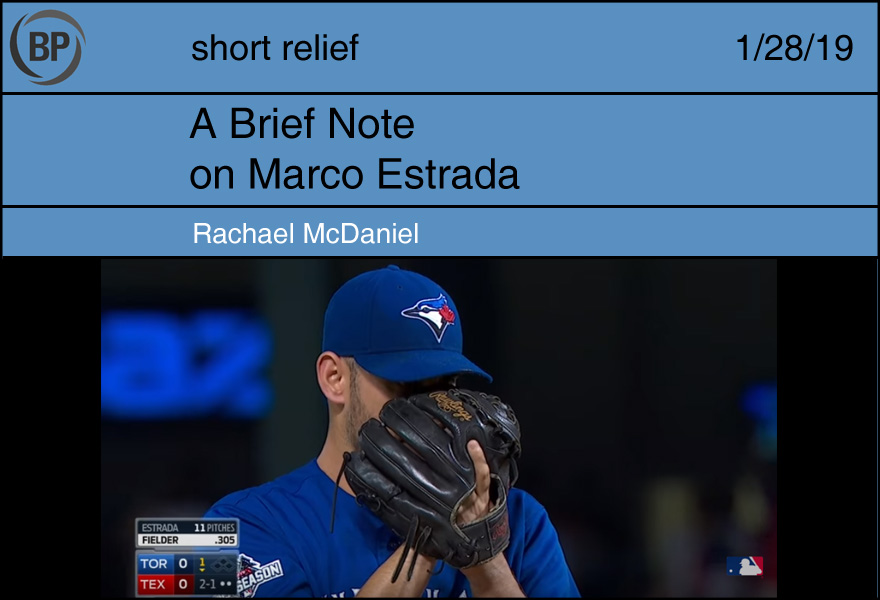 As far as I knew, and as far as I was concerned, Marco Estrada had always been good. I had neither reason nor inclination at that point to know any different. The history of baseball, as constructed in my brain, consisted of the 90s Yankee dynasty, Roy Halladay, and several periods of static void that lifted only in mid-2015. And at that point, Marco Estrada was probably the best pitcher in the Jays’ starting rotation who wasn’t David Price.

My most distinct memories are of that pose, before every pitch. that he took on when reading the signs from the catcher. I would learn later that he had learned from Mark Buehrle to focus entirely on the directives given by the catcher, to not concern himself with doubt of selection or situation, giving his entire brain over to the physical action of making the best pitch possible. But I didn’t know that then. All I knew was the way that this whole-minded focus manifested itself: a pair of eyes staring over a glove that covered his face like a mask, shadowed by the brim of his hat, expressionless and powerful. Then, every time, he took a deep breath. And then, a lot of the time, he threw a changeup. More often than not, it was a good one.

Other than the bat flip, the most memorable thing about the Blue Jays’ two playoff appearances were Estrada’s series-saving wins, balancing the fate of the team on a knife’s edge. He never threw that hard. The pitches always seemed hittable. It was amazing.

I learned about baseball after that, and I learned that Estrada had only become good very recently, and that a lot of people believed that he wasn’t actually good at all. It made me like him more. And it made it even sadder when he began to stop being good. The back issues and the loss of velocity, a home run on what seemed like every changeup that missed.

Estrada pitched two games in Oakland during his time with the Blue Jays. One was on July 30th last year, his first game back from injury. I really hoped that he would do well. I believed it, even. He did not. The stadium was empty, and he gave up another home run. Before every pitch, though, for a moment, he was still the same as in Game 3, 2015. A pair of eyes, staring over the top of a glove. A deep breath. I’m going to miss him. 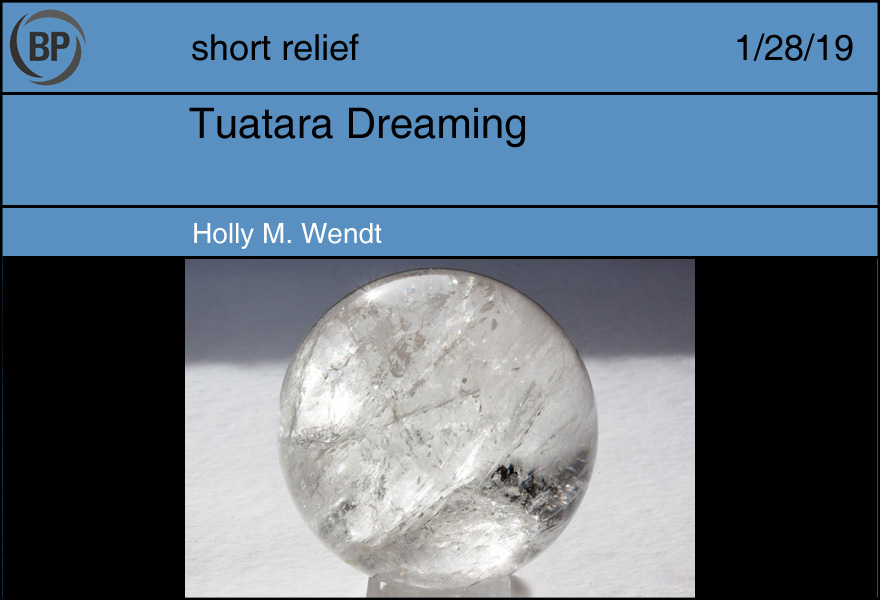 While the northern hemisphere dreams about Spring Training, the southern is putting one of its leagues to bed for the approaching winter’s night. The 160 games of the Australian Baseball League’s regular season are complete, and by the end of the first week of February, a new champion will be decided. With the close of the ABL’s regular season comes also the docking of the Auckland Tuatara’s inaugural voyage.

Auckland, along with the Adelaide Bite and fellow newcomers Geelong Korea, are not taking part in the playoff bracket, and wildcard hopefuls Melbourne have already been knocked out by the Canberra Cavalry, who, in turn, have been nudged out of the hunt for the Claxton Shield by the Brisbane Bandits. The Bandits will face the Perth Heat this coming weekend, a best-of-three series for the league championship.

I’ll tune in, though I will perhaps be attending most to my stymied hope—the fact that I won’t be watching New Zealand’s flagship team in a Cinderella final. But being an expansion team is difficult. Being an expansion team in a league where every other team is located in another country, across at least 1300 miles of ocean, is a whole other order of challenge. The Tuatara also had to face a portion of their season without their most exciting young arm. Phillies prospect Kyle Glogoski was shut down in December, fatigued and sore one start shy of his planned season limit.

Glogoski, who turned twenty at the beginning of the month, is expected to make the long trip to Florida this spring for the Phillies’ minor league camp. Maybe he’ll land in the Gulf Coast League again for three short, hot months in Clearwater; maybe he’ll manage a promotion to Class-A Short Season. Maybe the soreness will linger or worsen or change. Maybe a lot of things, none of which I or the small crystal ball of his brief career thus far can foretell. Still, the four starts he was able to make in the ABL were productive: 18 strikeouts and just three walks in 19 innings of work.

I should be more prudent in these matters. I should look halfway around the globe with more caution, especially at a pitcher whose experiences are still so slight against the six-month arc that is Major League Baseball, especially when there has never been an MLB player from New Zealand. We are fooling ourselves if we say history and tradition have no influence here; history and tradition provide access, support, reinforcement. The necessary blend of skill and good luck are only part of the puzzle, and it’s a long, long way from the rookie leagues to anything else. Nevertheless, I can do nothing else but give myself permission to swim in the Tuatara teal waters of what-ifs and wishes because late January is choking Pennsylvania in ice under a shade of sky that makes a very fetching set of road grays but is nothing much to dream of.