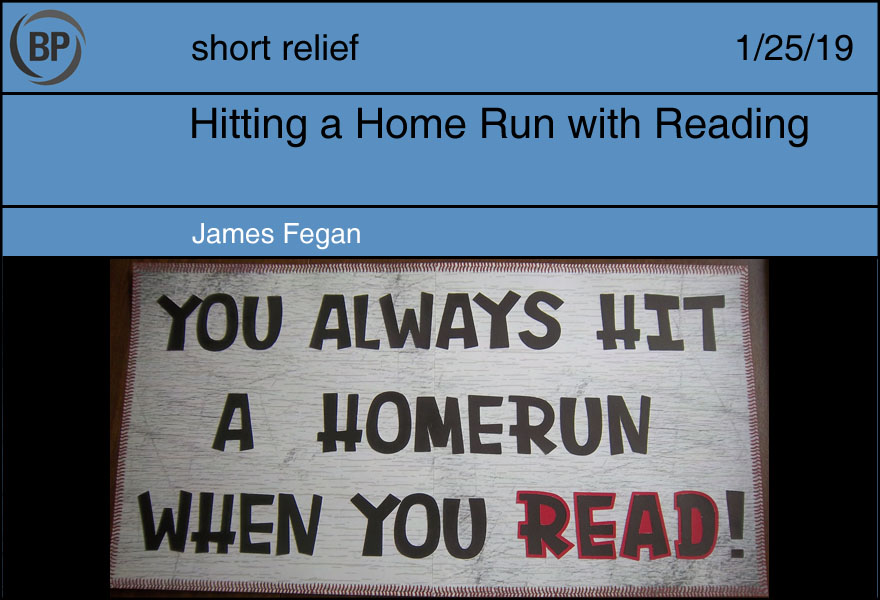 As a professional baseball player, joining your teammates on a visit to an elementary school to read to children is the highest calling the offseason has to offer. No other team-sponsored community service event offers the same opportunity to deliver to the youth the rigorous textual analysis and literary discussion all kids crave.

When you’re tapping a weak comebacker back to the closer when a sacrifice fly would have tied the game in the ninth, they’ll remember how you explained The Giving Tree is really an account of the abuse that arises in seemingly loving relationships with uneven power dynamics, and give you a bit of a break. And probably not hating you for ruining two things.

But, there are always limitations.

Second, time is limited. The event time is an hour, you’ve already wasted seven minutes trying to button your jersey over the Eddie Bauer vest you’re now regretting having chosen. At least 10-15 minutes will be dedicated to taking pictures, and another 20 minutes is reserved for media interviews, which public relations staffers have informed you are likely to include questions about the DM you accidentally tweeted reading “owners cheap AF!!1” and then left up publicly on your account for the entire running time of Ralph Breaks the Internet.

As such, book selection is the separating factor present. Something attention-grabbing with a quickly synthesized central thesis is the only thing that will do the job.

1. The Lottery by Shirley Jackson

Perhaps above the reading level of the six-year-olds you’re addressing, and even with a short story, you’re hard-pressed to rush through the duration in your allotted time, but your spirited re-enactment of the stoning at the end is the sort of mixed-medium experience that gets young minds going.

“What if instead of going to Walgreens to buy you a Twix bar, your mommy or daddy paid a nominal fee to hand over sensitive health information to charlatan grifters? That wouldn’t be too cool, right?”

Obviously this will turn into more a book report than reading an excerpt, but you felt like they followed the thread of Silicon Valley fostering a culture of fraud.

You can’t help but hold concerns that the larger themes about the corporatization of warfare were lost when you had to shout out the final lines of Ripley’s bloody final fight against the xenomorph over the protests of three separate teachers, but the children’s ability to intone those sorts of concepts can only be accessed over time. Hopefully you’ll be invited back to discuss some of the redeeming elements of Prometheus. 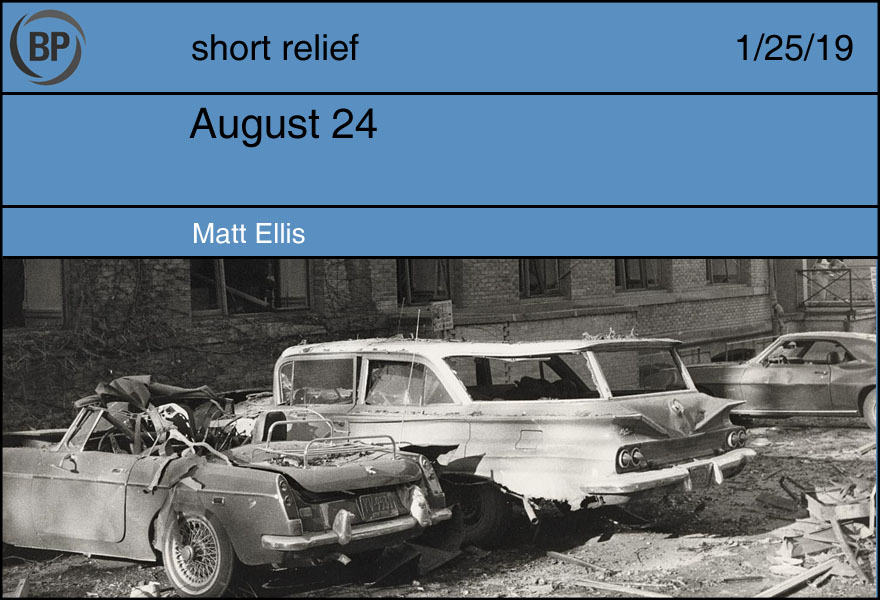 They gathered together, there, knowing it would start once the sun went down. Karl, in particular, shook: once he opened that door it could never be closed again. But still he remembered seeing the craters where civilization once gathered in the far-away rice patties, now turned to blackened husks beneath billowing clouds of orange dust, and he bit his tongue.

In Detroit, Marty Pattin was staring down Cesar Gutierrez, who had just climbed over the .200 mark a week earlier. He knew that Gutierrez had a thing for the outer half of the zone–moreso if you could fool him into thinking the center of the zone stretched that far–so he knew that a slider would do the trick. Sure enough, the ball made weak contact with the very tip of the corner of Gutierrez’ bat, dribbling down the third base side where Tommy Harper was waiting to scoop it up to toss to first. One out.

Karl stared into his brother’s eyes and saw a fire burn deep, deep as it could, and he realized that the door had already been opened. David and Leo sat with them as they watched the clock, and they put their things into small plastic bags that they tied up at the top, and they put them into a larger bag they wore on their backs so as to avoid being seen once they left the safe house.

Jim Northrup, though, smacked a double deep into left field, scoring McAuliffe from first. Brewers 0, Tigers 1. Pattin received the ball back from his catcher and stabbed in the air as he caught it, as if to register his discontent. It was always like this, or at least it had seemed like this lately. Like the ground upon which everything sat–the game, the country, the world–had turned to Jell-O and all anyone could do was point downwards and say hey look at that! while it continued to shake. He took off his glove and did that thing where he massaged the ball and spit and remembered that he only needed a single out to end the inning.

They got in the van and they went there, parking nearby. 2,000 pounds. It happened at 3:42 AM, and while it didn’t destroy the building it damaged it, killing one. Afterwards the Army would divest from the University of Wisconsin-Madison’s Army Mathematics Research Center, due in no small part to the number of anti-war protests the building seemed to constantly magnetize, but obviously also because of the bomb. It felt like the ground upon which everything sat–the people, the country, the world–had turned to Jell-O and all anyone could do was point downwards and say hey look at that! while it continued to shake.

The next day the Brewers played in Cleveland, and it was, then, and was again, and still will be. 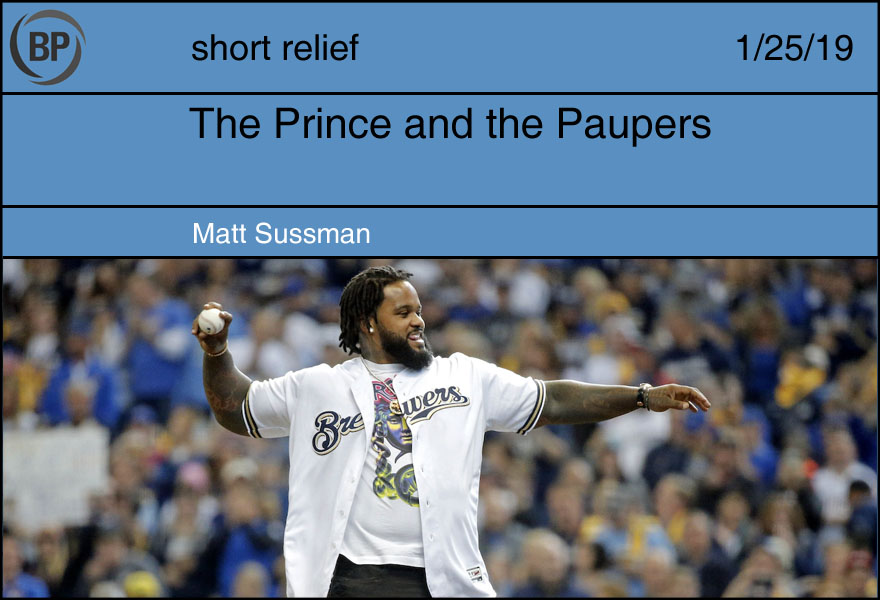 Prince Fielder is entering the eighth year of his nine-year contract. He hasn’t worn a baseball uniform tucked in since 2016. He probably hasn’t tucked any shirt in since then.

On this day seven years ago, The Tigers #mysteryteamed the entire damn league. They solved a small problem (Victor Martinez out for the season) with a solution befitting of an owner who knew he was going to die in a few years and a general manager who loved speeding through the free agency market like it was Supermarket Sweep. It didn’t “work” inasmuch that “working” is tantamount to winning a World Series, because standards of excellence in some circles are ludicrous, even though the team reached the ALCS In both years Fielder played in Detroit.

Yesterday the team announced in a hands-in-their-pockets-going-welp manner that they have high hopes the team will locate their pocketbook and just start whipping it at baseball players needing employment, but not until 2021 at the latest.

It wasn’t so long ago, although seven years in the 2010 feels like 47 years ago, but the Fielder signing capped the end to a fanciful offseason. It was the year Albert Pujols went westward and signed his life away with the Angels. CJ Wilson, too. The Marlins also window-dressed for a competitive run, signing Mark Buehrle, pre-toxic Jose Reyes and post-useful Heath Bell. It very well may have been the end of spending, since the Giants just went and found Ryan Theriot and Angel Pagan and took the World Series in four games.

Fielder most certainly eluded long-term criticism due to that neck injury, which turned him from underperformer to cautionary tale. Regardless of circumstance, it feels like the 2012 season was the final frontier of emptying the vaults for large men who provided baseball services. Bryce Harper and Manny Machado are jobless and they went longer into the offseason than Prince Fielder. The only way to sign them quickly, and the only way I will accept an outcome at this point, is for them to pull a Weekend at Ilitch’s, hope that both Harper and Machado forget that Mike passed away in 2017, and coast to the League Championship Series, where will lose to, like, the Rays, who adopted this new strategy where batters only swing at, like, changeups.