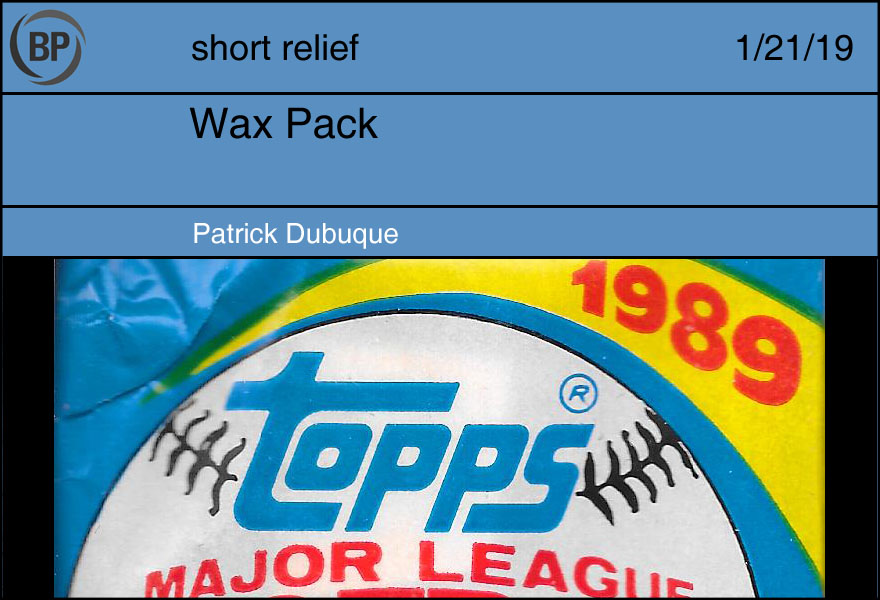 When I was ten years old, during the decade when all the kids collected baseball cards for three months, I had an idea.

I had a couple of friends who lived up the hill from me. One lived in a giant house, the son of a doctor and a lawyer; I spent countless days losing to him in the pickleball court in his backyard, and playing computer games like King’s Quest in his basement. He used to arrange his cards on the walls of his room, tacking up plastic pages and putting the best cards in them; he had a Jordan rookie that his parents made him keep safe, but we marveled at Mark McGwire in his Olympic gear and Jose Canseco with his wispy mustache.

I rarely stayed over at the other friend’s place, even though I liked him just as well. He lived in a small apartment with his mom but not his dad, and we often met in the municipal park nearby and played catch and football. He was a better person than I was, in a way that even a ten-year-old could tell; we were all good kids, but he was Good. His card collection was a loose pile in a box near his bed, and I made a few bad trades with him to make him feel like his collection had cards worth trading for. One was an Alex Cole rookie card that I told him was worth a dollar. I’ll always remember Alex Cole for that.

My collection, and my house, were in between those two. I didn’t really consider the difference between them; we were just friends. It was the latter friend’s birthday soon, and though we were ten-year-olds and were in the habit of receiving gifts rather than giving them, I bought a pack of 1989 Topps baseball cards, in its cheap, waxy blue wrapper. I went home, opened the pack, and looked through it.

And then I made the best pack ever created. Topps didn’t make a Griffey rookie that year, but I loaded in all the best names: a Gregg Jefferies, of course, and a Canseco and a McGwire and a Mike Greenwell and a Kevin Mitchell and a Gregg Olson. Then I carefully rubbed a glue stick over the back of the wax wrapper, and folded them all in again. The next day, I gave my friend a pack of baseball cards for his birthday.

I watched him as he peeled open the wrapper and flicked through each card with the familiar motion of thumb and forefinger. He grew incredulous as each name passed him by. He was so happy. For once he was the luckiest kid in the world, as long as I didn’t tell him what I had done, that I had duplicates of every card he’d prized, that he wasn’t really lucky after all. 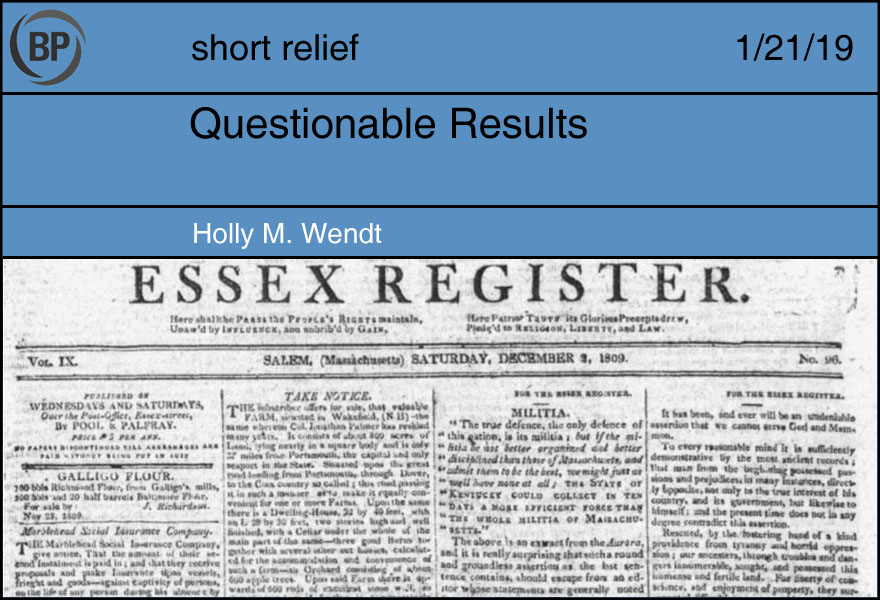 One of the marvels of the modern research process is being able to search, electronically, for terms in digitized materials like newspapers, magazines, and scholarly articles. For works that have always had some kind of digital presence—documents created via word processing software of some kind—the results are often close to perfect. For works that existed only in print at their origination—such as historical periodicals—the process is somewhat less perfect. Often the electronic eye that scans the documents in question might return words of similar shape, ones that feature ascenders and descenders in the correct order, even if the actual letters are different. Sometimes manuscript flaws produce a false positive: here is a hole or a crease or a stain that suggests the word somehow; specks of dirt have dotted many an i or closed a c into an o. And there’s the matter of typesetting changes: early American newspaper printers frequently utilized the long s—ſ or sometimes ʃ—which is “seen” as f or l or just about anything other than s. Still, for anyone who’s undertaking primary text research, it can be a great time-saver, even when factoring in the time needed to trim out false positives.

And then sometimes, well, your guess is as good as mine. 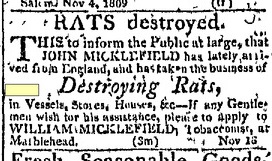 In the December 2, 1809 edition of the Essex Register from Salem, Massachusetts, the word “baseball” is conjured from utter nothingness. Delightfully, helpfully, the America’s Historical Newspapers database highlights the result in question with a yellow bar, so the researcher can find and evaluate the hit quickly. Here, the highlight hovers over nothingness, and a nothingness unrelated: one John Micklefield advertises himself as entering the business of pest control, specializing in destroying rats, and those who might wish to contract his services should contact William Micklefield, tobacconist, in Marblehead. There’s a narrative implied: I imagine John Micklefield as a young man, perhaps a boy still, and that might explain why it’s the tobacconist’s shop that will field interest in his services—his father’s shop. Any association to baseball exists in the potential grim instrument of rat destruction, but that’s a matter of imagination and nothing more.

There are any number of explanations for this search return, and maybe the most likely is a shadow from the page’s reverse, legacy of thin newsprint and heavy ink. Other questionable results from this search offered up the surname “Chaswell,” the word “Bamboo,” the ship name “Bright Phoebus,” and the word “hazardous,” all of which appear to be shape-based returns.

Searches like this are, frankly, a questionable use of my time, and yet there’s a kind of pleasure in it, opening dozens of grainy PDFs to squint at what might be baseball but probably isn’t. Consider it, charitably, as a kind of artistic archaeology, staring into the ones and zeroes like a Magic Eye puzzle, hoping that something familiar and wonderful will emerge. 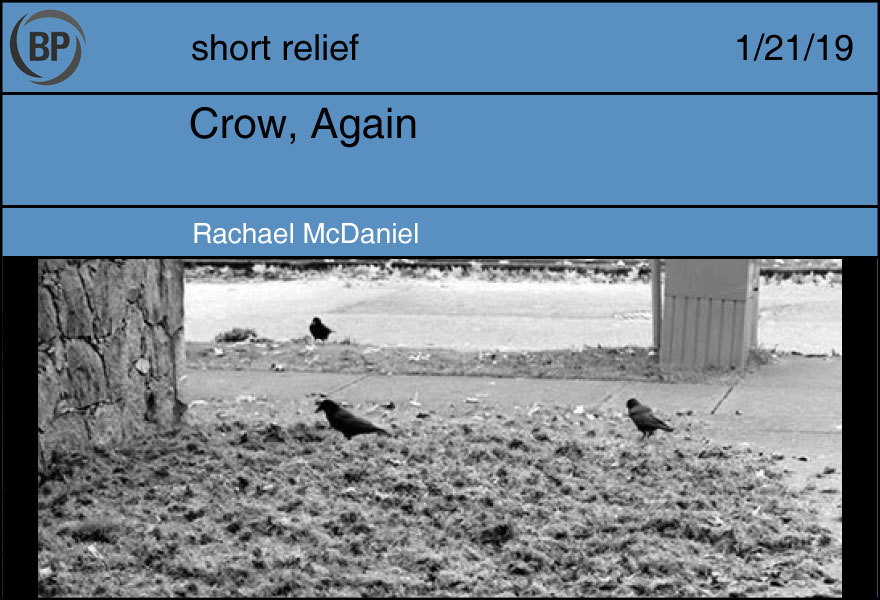 The crows have been here. They’re not here right now, but you can see the signs of their presence — namely, the fact that the grass of your once-pristine lawn has been flipped inside out. Random chunks of sod lie among the overturned mounds of earth, and despite yourself, you have to marvel at the destruction. A few little black birds did this, armed with nothing but their little black bird beaks. It’s a tiny wasteland.

Of course, it’s not even your yard anymore. It hasn’t been for years. But you were in a weird, melancholy mood today. Maybe it’s because of the full moon, the first of the year. So you took three buses over here, to the suburbs you almost never pass through now. The streets are the same, but the places look unfamiliar. Many of the sights you knew have since been replaced by shiny new things, or, more often, replaced by the ugly absences that signal the coming of shiny new things, fenced off and labeled.

This place falls firmly into the latter category. There is fence, taller than you, dark green, its paint chipping. There is a sign stating that that this project has a development permit, on which someone has spray-painted the words TENANT POWER. And then — nothing. The house is gone, but the thing replacing doesn’t seem like it’s coming any time soon. The tree is gone, too. The world can definitely do without the house, but you wish the tree at least was there.

All that’s left is the lawn. You may not have spent more hours out here than inside, but the hours you spent out here were certainly happier. No matter how many times you were told to stop running out into the street to catch errant wiffle balls, you always did, and you only almost got hit by a car the one time. You remember taking your hat off as the sun faded, watching the sky grow dark, face up on the cool grass. That was what you missed most when you had to move into the city, into the mouldy apartment in the grey building. You never came back here, but in your head it was always the same. You thought that now, maybe, some other kid was playing on the grass, chasing their wiffle balls, bouncing throws off the tree. It was only going without that made you realize what a privilege that was — to have somewhere quiet and safe and green.

You look down at the mounds of dirt. A crow descends from somewhere and gets to work, tearing up the earth again.