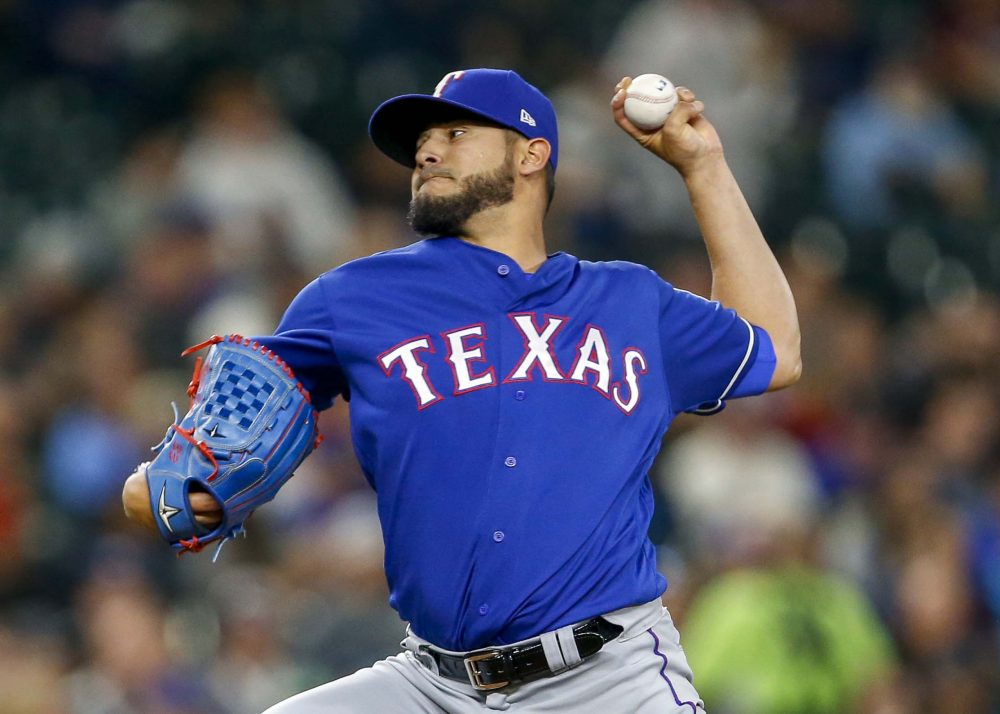 Martin Perez once ranked among baseball’s best pitching prospects, cracking BP’s top 101 list in four different years while coming up through the Rangers’ farm system and placing as high as no. 15 overall way back in 2010. And we certainly weren’t alone in thinking that highly of him in those days. Perez made quick work of the minors, debuting with the Rangers two months after his 21st birthday in 2012, and the next year the left-hander threw 124 innings with a 3.62 ERA. Five seasons later, Perez has yet to pitch that well again.

Since signing a long-term contract following his age-22 season, Perez has posted a 4.79 ERA while logging fewer than 90 innings in three of five seasons thanks to injuries and ineffectiveness. His prospect shine long gone, Perez seemed to reestablish himself as a useful innings-eater in 2016 (33 starts, 199 innings, 4.39 ERA) and 2017 (32 starts, 185 innings, 4.82 ERA), only to have the worst season of his career in 2018. In fact, it went off the rails—or fell off the fence, technically—before the season even began, as Perez suffered a broken right elbow while running away from a bull on his ranch in Venezuela. Seriously.

He rejoined the Rangers’ rotation ahead of schedule, starting the eighth game of the season, but Perez was then placed back on the disabled list in late April after allowing 25 runs in 22 innings. He returned two months later, mostly struggled, and was shifted to the bullpen in September, finishing with a 6.22 ERA in 85 innings. Texas declined his $7.5 million option for 2019, cutting Perez loose with two option years remaining on that contract signed following his promising first full season. Twins general manager Thad Levine was the Rangers’ assistant GM when Perez signed that deal.

Clearly the Twins think Perez is fully healthy following last offseason’s freak injury and are willing to look past his mess of a 2018 season in the hopes that he’ll resume being the solid back-of-the-rotation starter of 2016/2017. That’s certainly plausible. Perez actually pitched pretty well down the stretch in a relief role, getting good results and bumping his velocity into the mid-90s, and the bar to clear for a starting pitcher to be worth $4 million is scraping against the floor. However, what Perez seems to lack compared to other pitchers available for similar one-year fliers is upside.

Of the 131 pitchers who threw at least 250 innings as starters from 2016-2018, he was dead last in strikeout rate (13.1 percent), second-worst in batting average against (.291), and eighth-worst in swinging-strike rate (7.5 percent). His control is mediocre at best, none of his off-speed pitches stand out, extreme platoon splits make him vulnerable against lineups stacked with right-handed hitters, and Deserved Run Average hates Perez to an extent that they must have been mortal enemies in a previous life. Perez is the type of back-end starter Terry Ryan usually liked.

It’s not all bad, of course. He throws hard for a lefty, averaging 93-94 mph as a starter and bumping that up a notch as a reliever. Part of the reason why his strikeout rate has been so lacking is that his go-to pitch is a sinker that generates ground balls rather than missed bats. His struggles against righties also come attached to dominance over lefties, who’ve slugged just .349 off Perez for his career. Beyond that, despite seemingly being around forever Perez is still just 28 years old, making him the second-youngest member of the Twins’ rotation. Minnesota holds a 2020 team option on Perez, so that alone is at least a version of “upside.”

Perez, like most of the Twins’ offseason additions, makes sense as an inexpensive, low-wattage pickup. He’ll fill the fifth spot in the rotation cheaply, hopefully providing five adequate innings every five games while allowing the Twins to give a bit more minor-league seasoning to pitching prospects like Fernando Romero, Stephen Gonsalves, Zack Littell, and Kohl Stewart. Adalberto Mejia is out of minor-league options and may be cast aside now, which is noteworthy because PECOTA projects the 26-year-old left-hander to have a slightly better ERA than Perez.

It’s the same type of approach the Twins took in adding Blake Parker to the bullpen, and in adding C.J. Cron and Jonathan Schoop to the infield. Nelson Cruz doesn’t quite fit into that same category, because he isn’t cheap and he’s certainly not low-wattage, but his one-year, $14 million deal similarly allows the Twins to improve the 2019 team while avoiding anything that might hamper the 2020 or 2021 versions. All five of those players—Cruz, Schoop, Cron, Parker, Perez—are on one-year contracts and the Twins hold either a team option or arbitration control over all but Schoop for 2020.

Taken individually, they each make sense. Taken collectively, it’s a decent enough group headlined by Cruz. And yet the whole thing seems … unfinished. With each signing, there was a growing sense that the Twins were prioritizing the avoidance of multi-year commitments and keeping their payroll powder dry for a big move or two on the pitching front. Sure enough, they still have zero guaranteed contracts on the books beyond this season and their current payroll is just $99 million—$30 million below last year’s spending, the second-lowest Twins payroll relative to the rest of the league since 2002, and well short of any reasonable expectation given their revenue.

But here’s the problem: The only unsigned free agent pitchers who fit the “big move” description are Dallas Keuchel and Craig Kimbrel, and there’s no indication the Twins are realistically in the mix for either of them. “Big move” qualifier or not, the only unsigned pitchers who ranked among my top 50 free agents are Keuchel, Kimbrel, Gio Gonzalez, Drew Pomeranz, and Ervin Santana. Beyond that, the most appealing names are probably Wade Miley and Clay Buchholz among starters, and Brad Brach, Greg Holland, Ryan Madson, Bud Norris, and Justin Wilson among relievers.

Some good pitchers, certainly, and adding one or two of them would help the Twins, but almost all of them will be available on the same type of inexpensive one-year deals Minnesota has been handing out all offseason. Barring a shocking signing of Kimbrel or Keuchel, the Twins will have kept their payroll powder dry not to use it on a big splash, but to not use it at all. For a team that won 78 games even in a disappointing 2018 season and is currently projected to be slightly above .500 this season, it’s hard to understand why they’re merely treading water. Or at least it’s hard to understand without “it’s the Twins, they’re cheap” being the default answer.