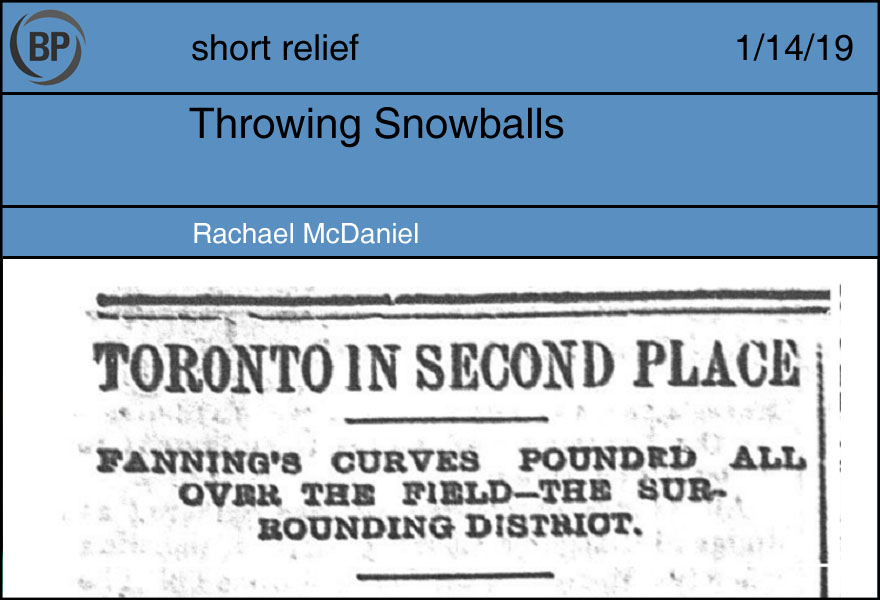 Here is a ruthless summary the previous day’s baseball proceedings from the Toronto Globe on June 6th, 1888:

LEATHER HUNTING AT BUFFALO
BUFFALO, June 5 — Today’s result may have reduced Mr. Fanning’s opinion of his ability to pitch good ball. Even that is doubtful. The main point now with Mr. Fanning is the opinion of the Buffalo management, and if that is guided by the opinions of ninety-nine out of every hundred of the regular attendants at Olympic Park Mr. Fanning will go home and stay until winter time, when he can be renovated and put in the field to toss snowballs. Certainly his inferior display of skill cost the Buffalos to-day’s game.

Going by the line score underneath the article, Mr. Fanning’s June 5 start against Toronto was indeed an inferior display of pitching skill. The final score was 14-3 against him; he allowed 20 hits, three walks, and three wild pitches, and went 0-for-3 at the plate. It was not one of his better days. And, really, it didn’t seem like Mr. Fanning had all that many better days. Of the few articles I can find attesting to his pitching performances, there are fewer stories of wins than there are of 15-2 losses. Though, to be fair, the fielders behind Mr. Fanning made 12 errors in that 15-2 game. It was the International Association in 1888. Times were tough out there.

Still, Mr. Fanning, whose first name goes unmentioned in all the documentation I can find of his existence, seems to have had a rougher time than most. Consider that the above passage wasn’t even written by someone rooting for the Buffalos. Mr. Fanning, it seems, incurred a level of scorn that transcended team allegiances. He was bad to the point that there was nothing left for him to do but to throw snowballs, alone on a field in the winter, far away from the playing of any actual baseball — a chilly exile.

The Buffalo management didn’t consign Mr. Fanning to snow duty. He seems to have kept pitching through the summer: On July 30th, he pitched pretty well, allowing only three runs, but his own TOOTBLAN prevented the Buffalos from scoring. After 1888, though, the unhappy Mr. Fanning fades from the view of my newspaper database. Perhaps he left baseball altogether. It would have been an unhappy winter, then.

There are 23 players with the last name Fanning listed on Baseball Reference as having played affiliate baseball. Only one of them has dates of activity consistent with the Mr. Fanning of my reading, and he is one of the two Fannings to have ever played in the Major Leagues: Jack Fanning of South Orange, NJ, who appeared in a game with the Hoosiers in 1889, and six games with the Phillies in 1894. He was not very good at all — his career ERA is 9.17 — but at least he made it. Not only did he make it: he made it twice.

I have no way of knowing whether or not Jack Fanning was the Mr. Fanning who pitched so poorly for Buffalo that summer, but I hope it was. I hope his winter wasn’t one of exile, far away from baseball, never to return. 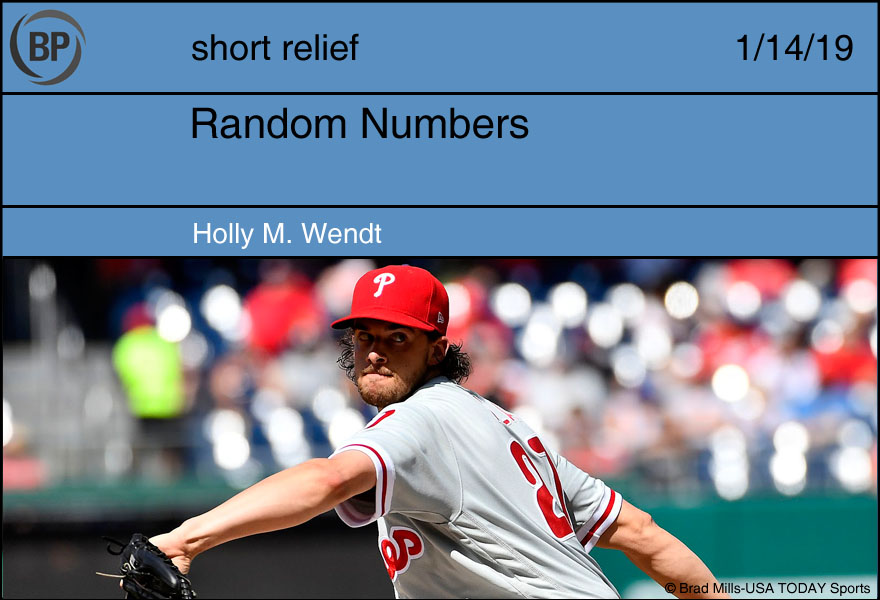 It’s mid-January, and I’m emotionally as far from summer as I’ll be, with snow on the air and a new semester beginning today. There’s some consolation in the knowledge we’re within a month of pitchers and catchers reporting, but everyone knows that days in February are actually three days long apiece and so I’m not comforted as much as I’d like. I needed baseball this weekend—baseball right this minute, and when I’m properly awake (sorry, Auckland), with the faces and uniforms I’ve missed.

For a surprise, I asked a random number generator for a date during the 2018 regular season, and what it spit back to me was June 23. Well, that was the second result. The first one was May 12, and on that date in Phillies baseball, their game against the Mets was rained out. On the afternoon of June 23, though, only a little bit of rain pattered through the late innings, and Washington’s Erick Fedde hurled his first pitch through sunshine for a called first strike against Cesar Hernandez.

The Phillies went quietly in the top of the first, and Aaron Nola earned two quick outs, including one on a first-pitch bunt attempt by Bryce Harper, trapped in the throes of his abysmal June. Then, however, the Nationals bounced to a 2-0 lead. I already knew how this game would end, and yet the little clench still hit: would it be one of those games, the disaster-fests so much more frequent in August and September?

It would not. Indeed, it turned out to be a game seemed designed to give me a little bit of everything I wanted, and not just the eventual win against a divisional opponent. Scott Kingery eked out an infield hit and stole a base that led to an important run. Jorge Alfaro threw out Bryce Harper at second. Maikel Franco, known neither for his speed nor dexterity on the bases, squeaked home safely on two plays at the plate; Odúbel Herrera made the kind of impressive, farcical catch that only he can make. Aaron Nola, against all probability—because he is a truly terrible hitter—knocked a 2-1 sinker into right field, and drove in a run. And Aaron Nola, on the mound, did what he did all season, which was give the Phillies every opportunity to win a baseball game.

Last week, the Phillies and Aaron Nola didn’t see eye-to-eye on Nola’s contract—a difference of opinions shaped like 2.25 million dollars—a circumstance that may see the two parties on the way to arbitration. For me, personally, those seven-digit numbers might as well be random numbers, for all the familiarity I’ll ever have with such sums, but I know they’re not. Baseball’s a business, et cetera and et cetera. That still doesn’t stop me from thinking the Phillies should put every one of those dollars in a bag and lob it ever-so-gently onto his plate. 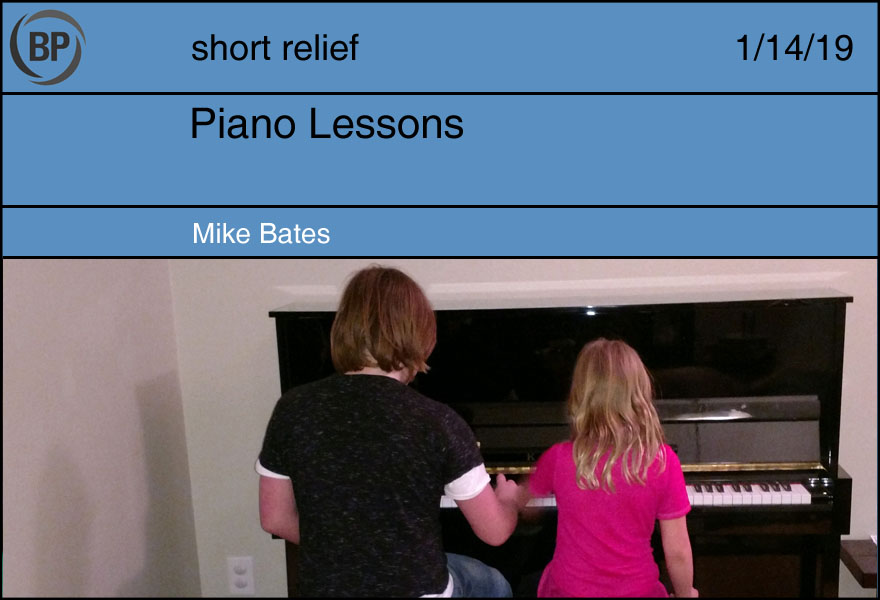 I want my kids to like me, so I bought a piano. My son is really interested in it (just as he was interested in guitar and trumped before this) and was spending a lot of time at our electric keyboard plunking out melodies. I thought my daughter would enjoy it too. At the very least, I thought it would make my house appealing to them in the competition between their mom’s and mine.*

I mention this because it seems like the White Sox have done the same thing. They’ve traded for Yonder Alonso and signed Jon Jay for the sole purpose of attracting Manny Machado, who is the former’s brother-in-law and the latter’s good friend. The Sox are banking on Machado giving their franchise a measure of extra credit for reuniting him with his loved ones. For making their house the cool house. It seems like a cool new kind of strategy.

Here’s the thing though: these are only great ideas if they work. If the Sox can land Manny Machado with their peer pressure strategy, it will have been entirely worth it. If my kids stick with the piano, I’ve made a good purchase. If not, I’ve got a giant piece of furniture taking up a lot of room in my house that nobody uses and that will be a pain in the ass to move if and when we decide we’re done with this house. I’ll resent it every time I walk past it.

If the Sox can’t land Manny Machado, they’re stuck with a mediocre first baseman and a declining outfielder. Sure, they won’t be stuck with them for long, as both are on one year deals, but for that year they’ll be a constant reminder of the club’s failure to land their primary target, and of their failed stab at relevance. The belief, publicly, is that the Sox have put pressure on Machado. But I think it’s quite the opposite. Because nobody wants to be constantly reminded that their house is the second favorite.