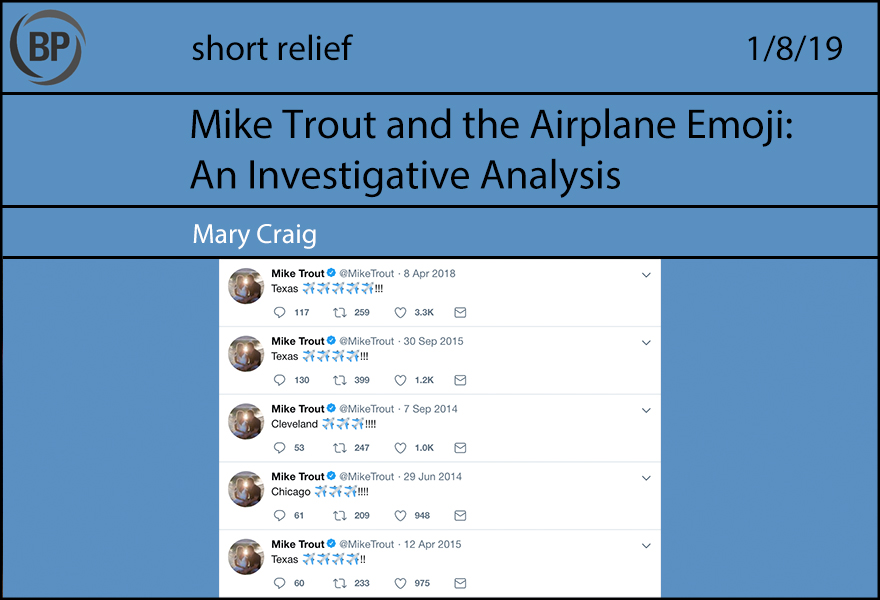 If you search Mike Trout’s Twitter account for the airplane emoji, you will find 168 tweets in which it is paired with some number of exclamation marks and often accompanying the name of a city. The first such tweet dates back to September 18th, 2013, the day the Angels ended a 10-game road trip and returned home to begin a 6-game homestand.

It’s unclear why Trout began this custom, but he has dutifully tweeted plane emojis for each of his flights during the regular season, from 2014 to 2018, with the number of emojis increasing annually. I’ve used the extent of my spreadsheet knowledge to craft a rudimentary chart of his airplane tweets each year, corresponding the city to number of emojis within each tweet.

It’s unlikely that the tweets mean much beyond uncovering Trout’s enthusiasm for air travel, but since we’re in the midst of yet another slow offseason, a little baseless speculation is the least of our concerns. Therefore, I am proposing that these tweets hold the key to Mike Trout’s impending free agency.

There is, of course, some ambiguity in Trout’s system: he refers to both Anaheim and Cali and fails to specify the opponent of two-team cities. Nonetheless, it is clear that some general trends have emerged.He obviously has rated Anaheim rather highly in each of these years, but he’s also displayed an affinity for Houston, the only other city to receive a seven-plane emoji tweet. He has also enjoyed his trips to Detroit, Boston, and Kansas City. His hometown of Philadelphia has received only one tweet, a three-plane ranking, tied for the lowest number awarded in 2014.

Absent from this list are four teams: Cincinnati, Miami, San Francisco, and San Diego. By the end of his current contract, he will hopefully have visited Cincinnati and Miami, leaving just the two NL West teams as true wild cards.

However, if he chooses to break out an eight-plane rank anytime in the next two seasons, all bets are off. 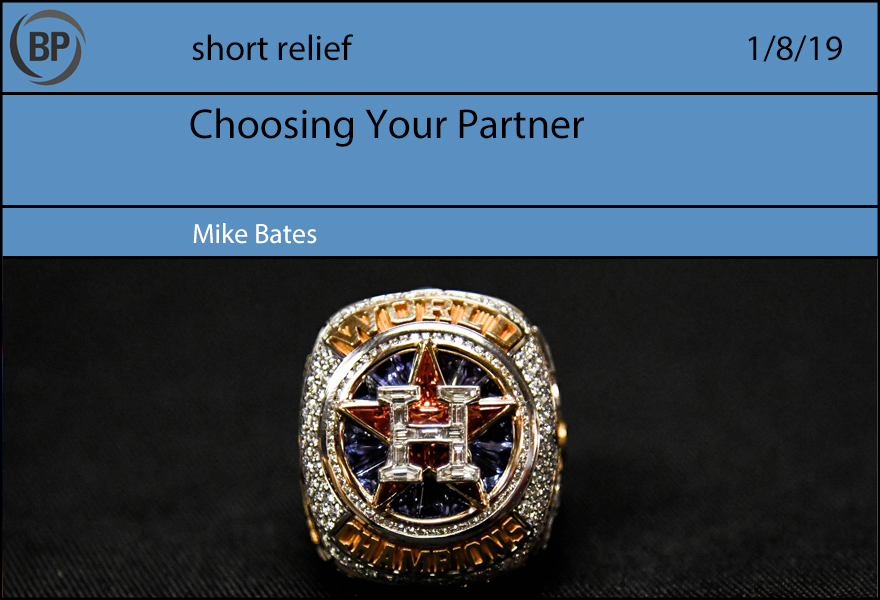 Over the holiday break, I got engaged. This will be my second marriage and I think I’ve done better this time at choosing a partner and will do better at being one. At the very least, I seem to have learned from the first attempt.

I think about this as I see players like Bryce Harper and Manny Machado exercising their free agent rights for the first time. I don’t know why they haven’t signed yet, nor do I know when they will. But when they do, it will probably be for a long time and I’m hopeful that they find partners who like them for who they are, and are prepared to accept (within reason, of course) whoever they’ll become. Forging the right partnership takes insight and patience. That means looking realistically at what a team will be able to spend with that player under contract and what that team and player can accomplish together, and making sure that everyone’s priorities are aligned.

Signing a free agent deal of the type they’re likely to ink creates expectations, however. It creates pressure. In 1992, Bobby Bonilla signed with his hometown Mets to (briefly) become the highest paid player in baseball. The Mets were excited to build a powerhouse team of veterans and outspent every other team by nearly 20 percent to do it. Bonilla wanted to be the richest player in baseball and come home as the conquering and beneficent hero. It was an awful fit. He struggled with injuries, got booed mercilessly, reacted poorly to that and to his struggles, and, on top of everything, the team was terrible. The fans, the team, and the press all turned on Bobby Bo. Everyone was miserable until the Mets managed to unload him to the Orioles.

Unlike me, Machado and Harper don’t get to learn from their mistakes. They only get one chance before they’re old and mostly used up. If they choose wrong, they could be miserable, trapped in a loveless relationship for the rest of their primes. And that’s, frankly, less fun for all of us. It’s no fun being in that relationship, but it’s no fun for everyone who has to watch you go through it as well. So take your time, gentlemen. And choose wisely. And, if it’s at all possible. Get yourself an opt-out clause. I can tell you from experience, that would have come in handy.