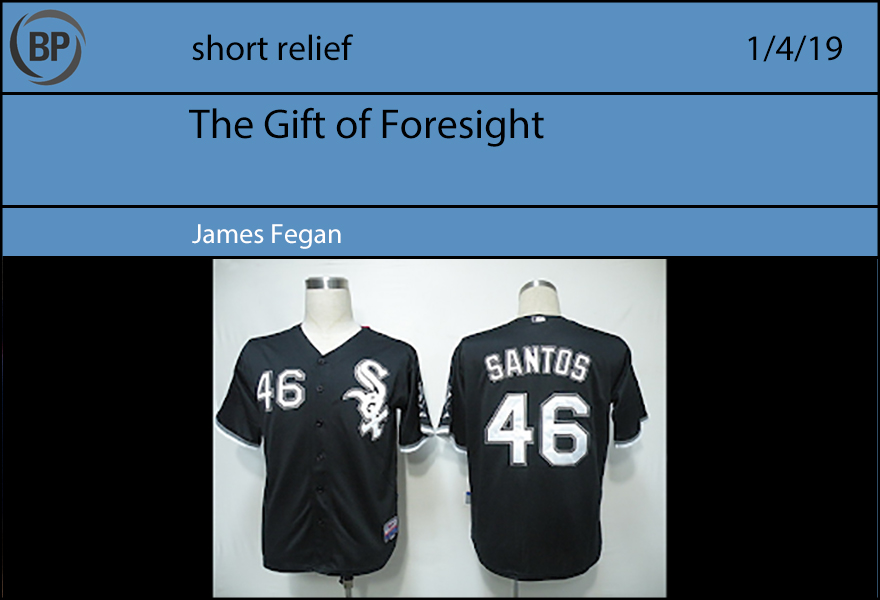 My aunt may be advancing in years, but she remains a sharply engaged holiday shopper, securing her entire bounty by the end of November. That means any requests of jerseys for presents had to be locked in before the start of the offseason in earnest. For a young man in his early twenties who thought obscure choices made him special and was just starting to tout the importance of team control into every conversation, it was an exciting challenge to pick a jersey that could be counted on to provide long-term value.

But by the time December 25, 2011 rolled around, my aunt’s sheepish expression as she slid my present toward me confirmed she had adhered to my request but also seen the news, that signing a contract extension on October 3 had not prevented young White Sox closer Sergio Santos from being dealt on December 9.

“I asked if I could exchange it for Chris Sale and they said no,” she offered.

An exchange for a Nestor Molina jersey, the return for Santos, would have been impossible as well, as he barely made it past Double-A.

With the slowing pace of offseason moves and the more aggressive and bloodless nature of teardowns, the jersey-purchasing risk has extended beyond just prudent and well-planned shoppers. Even just a week after Santos got dealt, every Christmas-observing San Diegan who dreamed of watching Mat Latos in their Mat Latos jersey for the next decade (an increasingly bizarre dream in retrospect) had their dreams dashed on December 17 when he was dealt with less than two years of service time accumulated. It was December 11 when he traded again from Cincinnati to Miami three years later, but the fallout of a dashed Latos romance was probably more muted by then.

There have actually been relatively few holiday jersey crises in the last few years despite these accelerating trends. Evan Longoria jerseys had probably seen market saturation in the Tampa area by the time he was traded on December 20, 2017. Same for Yasiel Puig, and while the Marlins sell-off last year frittered away young players in their prime with multiple years of control en masse, surely that part of the country is battle-hardened by now. When the Padres traded for Matt Kemp on December 18, 2014 and for Justin Upton and Wil Myers the next day, they actually created the opposite problem for their fans…when they were probably still recovering from the emotional fracture with Latos.

The more likely result is not ultimately a wave of trades that catch us by surprise but never being caught by surprise again. A contract extension is just a trade asset; a young player with a bright future is an even better one. Bloodless teardowns are not just for organizations that have run aground but every franchise lacking a clear path to dominance, and a Sergio Santos White Sox jersey is not an embarrassment but a mark of the universal experience. 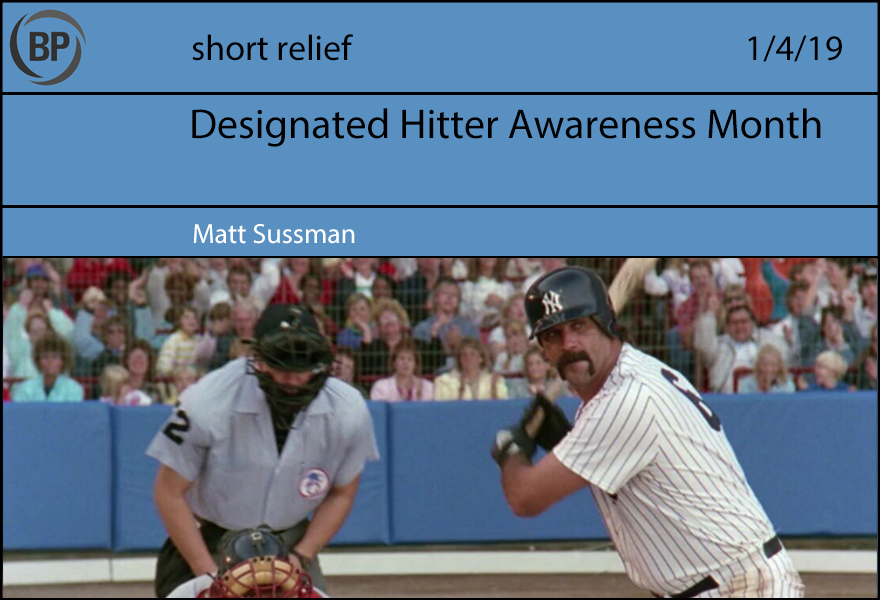 Welcome to Designated Hitter Awareness Month. I created DHAM four years ago in an attempt to pigeonhole the everlasting debate about the correctness of the designated hitter in baseball in a month where little else occurs other than Hall of Fame classes being announced, and now apparently all the good free agents sign during this month as well. Nonetheless, my tradition started first.

When picturing a DH, you are mentally sketching a huge human with cartoony muscles and hard emotions—a hermetically sealed first baseman. You’re imagining a replacement-level Gashouse Gorilla. You’re picturing Jack Cust with a gray goatee and no regret. David Ortiz rather boatraced the field, leaving us with Nelson Cruz in, and wait, when did Edwin Encarnacion change positions?

It was touch and go for a while, but the ascent of J.D. Martinez and Giancarlo Stanton as fieldless titans has somewhat restored my faith. Still, we’re far from the pinnacle that was 1996.

Let’s survey the field. Edgar Martinez, of course. Paul Molitor suiting up for the Twins at 39. Chili Davis still hanging around with the Angels. Harold Baines, now with a bigger speaking fee. A skinny dude named Geronimo Berroa who somehow led all DHs in total bases. Cecil Fielder wasn’t quite a DH—he technically had more playing time at first base—but he was swapped midseason for another of his ilk, Ruben Sierra. And that wasn’t the only DH trade: Eddie Murray, all of 40 years old, was dealt from Cleveland to Baltimore at the trade deadline to give Jeromy Burnitz some more PAs at the designated hitter spot.

Burnitz would then be traded for yet another primarily DH, Kevin Seitzer. Randomly, Mickey Tettleton was in this class down in Texas. There was even a DH platoon in Boston: Jose Canseco from the right, Reggie Jefferson from the left. Carlos Delgado was up-and-coming, and I’m going to count this anyways because it came up in my search: it was 24-year-old Raul Ibanez’s major league debut season. Four games, all at DH.

It was a wild era. Everyone wanted dingers, and everyone was hitting them. They’re always going to have a suboptimal reputation because All They Do Is Hit, and if you went 0-for-4 you did nothing else. But I suspect part of the dark cloud over their head is the word “designated,” which is also what you do to a player you want to take off the 40-man roster. You want to win the DH war? Win the marketing war. Start calling ‘em Dedicated Hitters.

You need to be logged in to comment. Login or Subscribe
Sharky
Two very enjoyable articles. Really filling a need for articles that have the emotional impact of traditional sportswriting while maintaining the awareness that appeals to the stathead/sabermetrician audience. Very difficult to do. With the demise of BP city sites, I hope we can still maintain content like this that speaks to the fans' emotional (and occasionally nostalgic) connection to baseball. It is in short supply these days.
Reply to Sharky