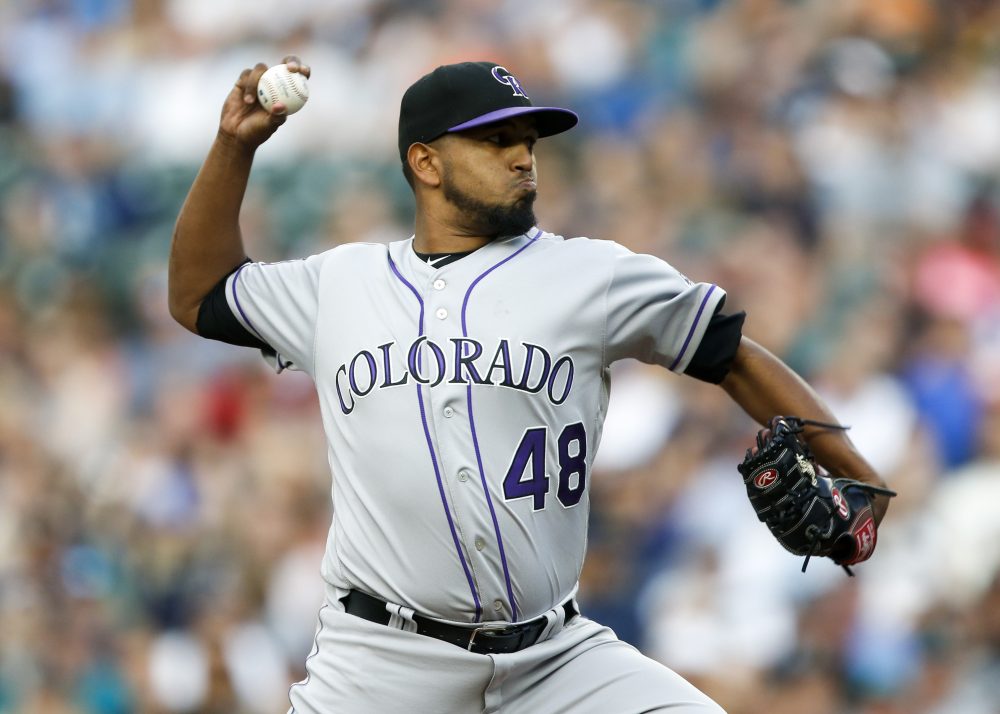 This may not be terribly relevant to the day-to-day of fantasy decision making, but I’m fascinated by the conundrum of Rockies starting pitching. With a geographical and meteorological situation (high elevation, dry air) that pretty much guarantees enhanced offensive production, the Rockies have never quite figured out what to do with their pitching (see Dan Rozenson’s excellent 2013 piece for a pitch-by-pitch breakdown of the Coors difficulties).

So what has this meant for 2018 so far, and are there any takeaways we can use in the final six weeks or so of the fantasy season? According to the surface stats, this year’s edition seems to be another mediocre Rox rotation: righties Jon Gray and German Marquez have disappointed with above-average ERAs and frequent blow-up starts, Tyler Anderson has shown promise but not consistency, and only Kyle Freeland has approximated something like a competent starter.

In recent weeks, though, Gray and Marquez in particular have each been on quite a run. Gray is likely owned in just about all leagues, but Marquez is widely available (23% owned in Yahoo, 51% in CBS leagues). These two righties are both trying to survive using a similar formula: throw your fastball hard and (ideally) down, and mix in your best secondary pitch to get whiffs (a slider for Gray, a curveball for Marquez). Let’s dig a little deeper into the recent success of these two Rockies righties.

Here’s Jon Gray’s line since his return from a demotion to Triple-A:

So, I guess any struggling pitcher should get a taste of those minor-league bus rides, bad food, and budget motels to remind him of what he stands to lose if he doesn’t perform in the bigs. Right?

Well, hold on there, Captain Narrative. As far as velocity and pitch mix, there’s no real difference between the pre-demotion Gray and the returned prodigal son. His four-seam velocity remains elite, he’s working with the same fastball/slider combo, and he’s getting more than half of his batted balls on the ground. The biggest difference? How about a pre-demotion BABIP of .386 and a post-callback BABIP of .162? I don’t think this is straight luck—Gray seems to be throwing fewer mistake pitches in his recent run—but for a guy with a career BABIP of .331, I think we can expect Better Jon Gray for the rest of the season, although Ace Jon Gray could very well be a white whale that we never hunt down.

But the larger point here is this: for what Jon Gray is, it works pretty much as well at Coors as it does in other ballparks. The slider is hard enough to bite, even in the thin Colorado air, and the ground balls are even more frequent at home (56.3 percent) than on the road (40 percent). I’m starting Gray in all leagues and all locations, knowing that the occasional bad-fastball mess is going to be made. We’ve been through so much, Jon. I won’t leave you now.

Marquez, on the other hand, seems to be the poster boy for the Coors/road split. I had moderately high hopes for the 23-year-old coming into this season, based on the signs of growth he had shown in the 2017 season, his potent mid-90s heat/low-80s curveball mix, and the fact that he was still a relatively young arm.

It hasn’t worked out as planned. This year, Marquez has posted a 6.63 ERA in Coors while cruising to a 3.09 ERA in all other parks. But check out Marquez since a June 30 start against the Dodgers:

Now that’s more like it. Marquez seems to have upped his curveball usage over his last several starts, mixing it in almost as much as his bread-and-butter four-seamer:

And, my goodness, is it fooling hitters—check out the uptick in whiff rate:

Marquez, unfortunately, still lacks a legitimate third pitch. This spring, he was hoping to develop his changeup into just such a pitch, but as his usage suggests, he hasn’t really made a breakthrough yet. He’s going back to what he feels most comfortable with, and that seems to be working for now. The caveat here is that Marquez’s run has only featured two home starts, so the curveball usage that has fueled his recent success may still be prone to failure at his notoriously curve-unfriendly home park.

In conclusion, Gray remains a riddle—but if slightly better fastball command can help get him to more two-strike counts and his deadly slider, he still has the upside of a SP2, if not a bona fide ace. He (along with Kyle Freeland) has come the closest of any current Rockies pitcher to negating the lopsided home/road split. Marquez, on the other hand, is still very much a work in progress, particularly as we wait to see if he can develop a third pitch. But if you are in need of a quick boost to your strikeouts, I would recommend a pickup even in 12-team mixers. You can feel good about starting him on the road, and I would pick and choose my Coors matchups.

The larger takeaway here—with teams (including, yes, finally the Rockies) using more extensive and granular pitch and batted-ball data to help guide organizational decisions from drafting, through development, and finally major league performance, we fantasy players need to be a bit more savvy in how we approach pitching in Coors Field, and Rockies starters in particular. With four promising (if flawed) starters finding their way to measured success in 2018, the days of categorically dismissing any and all Colorado arms may be coming to an end.