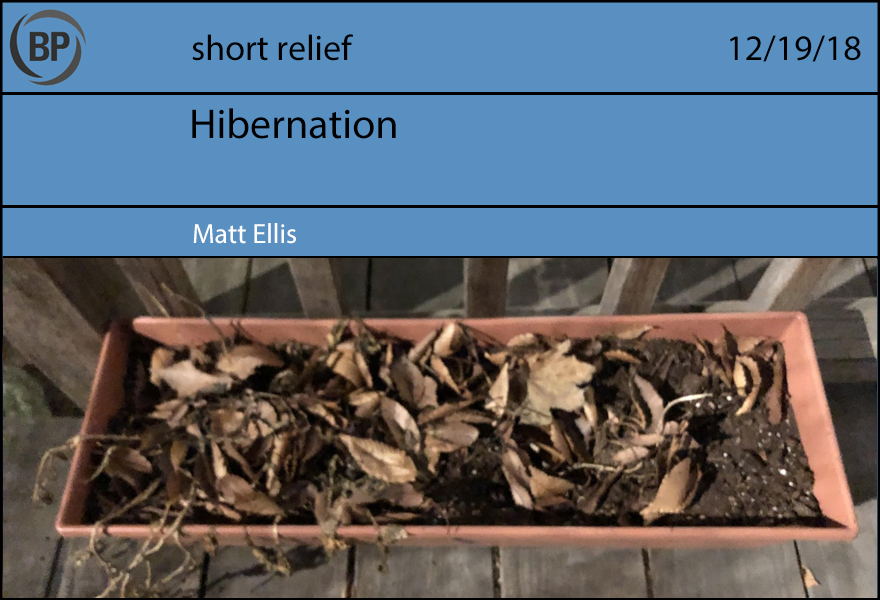 It is cold outside, and the plants are dead. We have a long pot on our front porch, and whenever I look at it in the winter I wonder how it’s possible those thin brown strings covered in dead leaves can summon the strength to become vertical again each March, and yet somehow they do. A rejoinder to the beckoning silence that is December. It says this is not always, and yet even though I can’t really wrap my head around what that means I guess the promise—nay, the suggestion—is enough to keep going.

What is the grass like at Wrigley right now? Fenway? It’s kind of strange, if you ask me, that the very ground upon which baseball is played is a living, breathing entity, a ground that suffers and dies each year only to be reborn in the spring as a different version of itself. Some guys jump and dive and roll around in it like little children, and nobody thinks any different, nobody realizes the fundamental contradiction that that kind of behavior is best had in public parks by eight-year-olds obsessed with boogers and capturing grasshoppers. Instead they pay this guy eight million dollars to catch a ball and the other one a paltry salary of only $350,000 to do the same—an amount of money I will never even reach the quarter-mark of earning in my entire life, even if I work until I was 85 years old.

The grass dies, and it is born again, and then it dies once more. A lame Ken Burns metaphor that runs beneath it all and tells us we can be safe in the arms of time if we just wait a couple of months. It feels good—the reminder that death isn’t permanent. And yet, my plants are really dead, they are gone, and I always wonder if this is going to be the first year they don’t grow back again in the spring. 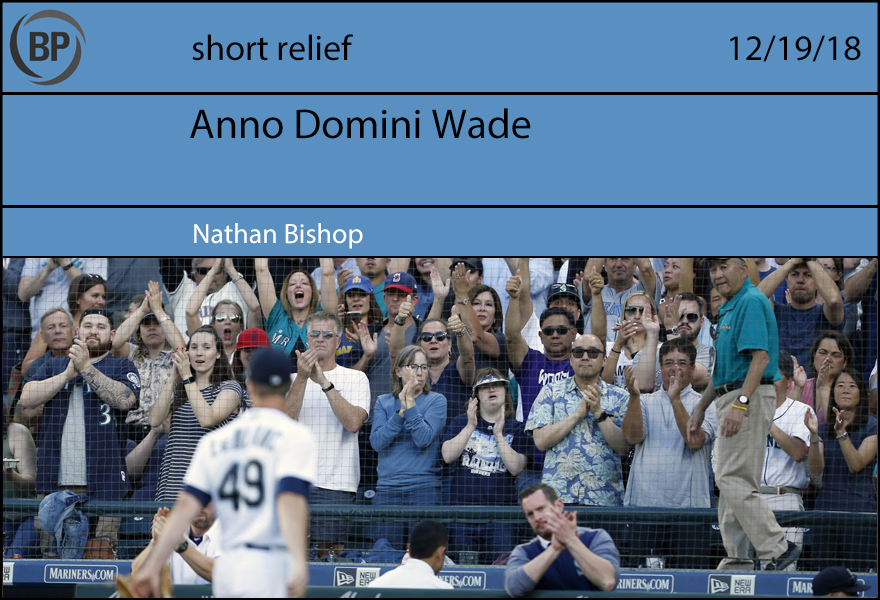 Another year is approaching its end and, friends, it’s not one that this author can claim to have enjoyed very much. Concerning baseball: My baseball team, the Seattle Mariners, subjected their fans to the cruelest staging of Lucy Pulling Football From Charlie Brown on record. My son is approaching adolescence, and as far as he’s concerned, stories about the Mariners in the playoffs may as well be carved in limestone. Ancient myths, from ancient times.

Beyond my personal rooting interest, the sport itself—always something I’ve clung to as an emotional buoy—finally sprang some leaks. Adulthood’s dank bilgewater rushed in, and my beloved baseball—with all its labor strife, wage suppression, racism and misogyny-fueled scandals and other trappings of reality—sunk the game down and settled it in the murky, cold depth with the rest of life’s jetsam.

I’ve sunk as well, of course. Another year of my mid-30s has passed by; facial hair peeks out from my chin ever saltier; the innocence of my children wanes as we transition from trying to protect them from life, to starting to prepare them for it; the aspirational goals and dreams unfulfilled feel less and less like tomorrow’s successes, and more like today’s failures. Middle age looms.

In the throes of this melancholic calendar then I take great comfort in the year of Mariners pitcher Wade LeBlanc. After more than a decade vacillating between spot starts and the waiver wire, after returning from a year pitching in Japan and being told by his agent that no one wanted him, after turning 30, getting married, having two children, and watching the post-baseball abyss yawn in front of him, LeBlanc found a home in Seattle in 2018. He made 27 starts and, armed with fastball velocity that Jared Weaver and Dan Haren take turns making fun of each other and themselves for, threw 162 innings. He was lauded, and loved. He was given standing ovations. A contract extension provided him and his family with, for the first time, a semblance of job security. In a franchise best known for its King, he found a throne of his own. He graduated from college.

LeBlanc’s annus mirabilis had me curious, and so I went looking for answers. Surely, with the Dodgers annually crafting sluggers out of bench bats, with Charlie Morton and Gerrit Cole achieving new career highs the moment they donned an Astros uniform, Seattle had done something to unlock this unprecedented success; an arm slot adjustment, a delivery quirk, a new pitch, an old pitch, something.

Over the summer I had the opportunity to talk to a Mariners’ front office employee. We talked about pitchers, and eventually the conversation turned to LeBlanc. “What did you do?” I asked, and the employee chuckled. “Wade LeBlanc,” he answered, “is the same as he has always been. We did nothing.” Looking back on it, with a new year weeks away, I find that very comforting. It’s almost time to try again. 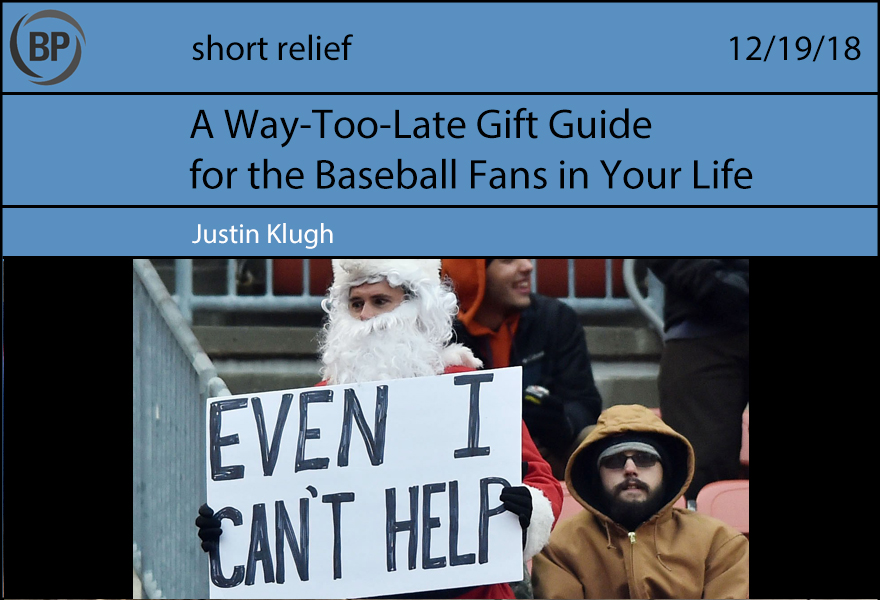 We all have that member of our family who is difficult to shop fo–wait, what’s the date today? Seriously? I thought there was still… None of these gifts can even arrive until… February 2019?? And why is it shipping from the U.K.? They don’t even play baseball there! Didn’t that country break in half? Oh god oh god.

Heh heh, well folks, it’s never too early to start planning for next Christmas, so this list will

[Email that was accidentally copied and pasted here]

To Whom it May Concern at PerfectGifts.org,

Your website crashed my computer and as compensation I demand you deliver the 24 products I was attempting to order with free two-day shipping. I am what’s known as an “influential Twitter user” and I will not hesitate to summon the full power of my position to sully your company’s representation if this situation is not made right.

Coupons! People love coupons, always have. So personal and customizable. Like, if you’re known for doing something in your family, you can play that up. This could be, “One free home cooked dinner, mostly not burned, ha ha ha.” People really appreciate these, especially when given by a fully grown adult and not a child or spouse, believe me; they won’t sigh, nod a wordless thank-you, and move onto the next thing. You could also try, “One free trip to a ball game where I don’t scream at the cameraman to put me on the big screen and then hold up a post with tiny, illegible writing on it outlining my 14-part, highly analytical plan to save the franchise.” Or, “This coupon is good for one non-ruined Christmas by me. Not eligible for use this year!”

This is it. This is why they hate me.

You can also use your talents to make your loved ones gifts, if you have any of those. Talents, I mean. Not loved ones. You could send them a draft of an essay that you’re doing for a baseball annual and ask for “detailed, but not critical, feedback.” Be sure to note as well that you’re “not likely to change anything, anyway; just look for outside opinions.” Really, you’re just giving them a sneak peek at a piece of writing they probably can’t wait to read on the state of the MLB franchise you cover! If that’s not up their alley–try writing a meaningful short story with your relationship at its core, spend half a day on it, share it with them via Google Docs, and then delete it after getting an email from them that simply reads “I’m confused; what is this, Justin? Sincerely, Aunt Gladys,” and cc’s your mother!

Hey! Happy Wednesday, ha ha ha. Listen, I know I said I was going to “‘do my own thing” this year, but what did you wind up getting dad? And mom and grandma? And everybody else? Nice, nice, hey listen–any room on the name tag for me to jump on? Ha ha. Of course I’m kidding! Yeah. Uh huh. I don’t do this “every” year. Just this year. And the nine before it. It’s tough to go holiday shopping when you’re getting a college education and the cat you and your roommates adopt strangles itself with a string of Christmas lights. Yes, I’m “still talking about that.” It was traumatizing. Look, just help me out here. Some of us are busy with our careers and don’t have time to sit around and fill virtual shopping carts. Uh huh. Uh huh. Yep, two kids. I remember. Yeah. Yeah I’m still trying to be a baseball writer.