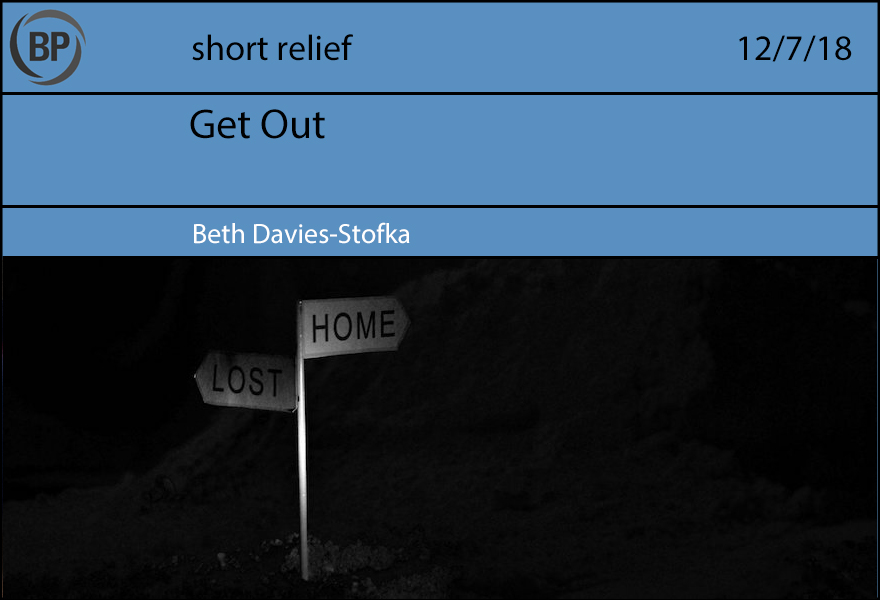 I remember an evening in a warm cafe in Toronto, sitting with Ben, a United Church pastor. We had become friends after I persuaded his church to give sanctuary to a refugee named Ibrahim. We didn’t know that a Holocaust survivor lived nearby, and that Ibrahim’s presence near her home triggered old and dreadful fears. Families and communities that gave shelter to people fleeing the Nazis were punished for it; Ibrahim’s presence in the church led her to relive those awful times. She began making late-night visits to the church, hoping to persuade Ibrahim to leave. Ben mediated, and the two started talking, survivor and refugee. Alone together in their night time conversations, they shared their suffering with one another. They formed a powerful connection, and within it, they each received a bit of healing. It was a miracle. I loved Ben so much because his good shepherding allowed us to witness this miracle together.

Imagine my surprise then, in the warm cafe that evening, when Ben asked me if I’d ever seen Last Tango in Paris. I hadn’t. He told me that he’d seen it the night before and it had made him very uncomfortable. “I’m not surprised,” I recall telling him. “You’re a pastor.” “That’s not it,” he said. And then, shamefaced, he told me that for twelve years, he had been beating his wife.

I don’t know if I even had time to blink. You have to do the right thing, I told him. You need to be the person who does the right thing. He sat quietly for a bit after that. I can still see him as he left the table and walked out the door. It was the last time I saw him. He went home. He repented to his wife. He moved out that night, resigned from the church, and returned to his hometown of Calgary for counseling. He got an office job, and they divorced. I had the honor of accompanying his wife as she began to heal.

Even the best and most beautiful people can live with a terrible secret. When that secret comes out, something must be done. Ben couldn’t undo the pain he had inflicted, but in a moment of opportunity, he chose to stop causing more pain. He didn’t cling to his church and marginalize his wife. He didn’t continue to hit her when no one could see him do it. He repented. And then he went away so that he wouldn’t hurt her anymore.

Ben wasn’t forced to do this; he chose it. He chose to give up everything in order to stop hurting another human being. I remember him now because his story is one that MLB, the GMs, and the players need to hear. Stop preaching love and sowing fear. If you are using fists, guns, or any other weapon to hurt other people, recognize that this is a choice you are making and choose differently. Do the right thing and get out. 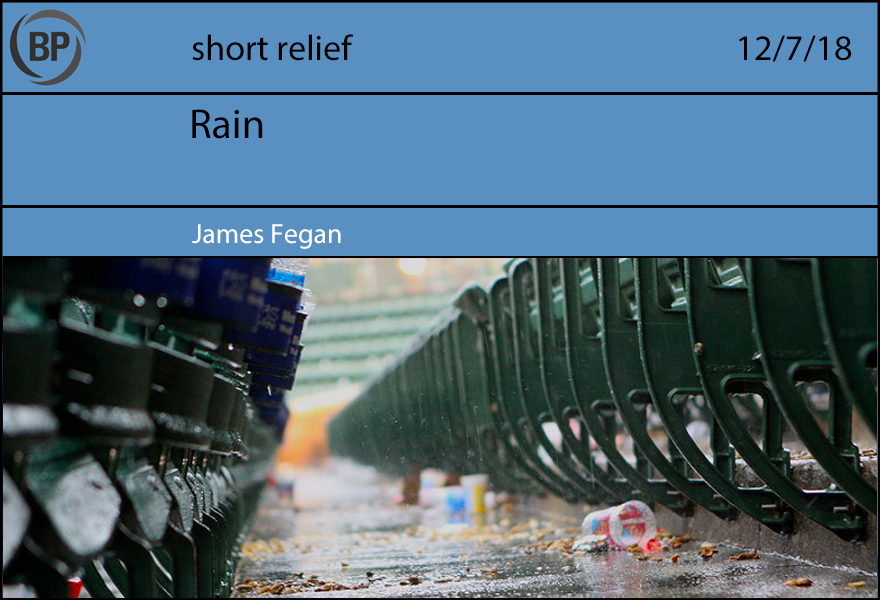 When I left Short Relief, I was struggling to move beyond the same two topics over and over: observations made while doing my job, which in most instances need to be written up for my job, and a curiosity of what baseball — a game known for its leisurely, strolling pace through a seemingly endless summer — will look like as the world hastily melts.

The Low-A West Virginia Power and Hagerstown Suns played just 133 games of a 140-game schedule this past season. No one in the South Atlantic League made it a full 140 games. The previous year, only the Hickory Crawdads had the distinction of playing the whole schedule. In 2016, five teams played 140. In 2015 it was only two, but no one played fewer than 138. It will only get harder.

At the High-A level in the Carolina League, it’s typical to see nearly every employee in the ballpark spill out onto the field to drag the tarp. Rainfall that would invoke a fairly routine delay in the majors can grind all the functions of a minor-league stadium to a halt because it calls for all hands on deck, and a major one exposes the lack of significant draining infrastructure. The South Atlantic is the same deal, just with fewer people on hand and a lower threshold before they’re overwhelmed.

Even with the option of seven-inning doubleheaders in a small, 14-team league with countless return visits through the schedule and the famous sheer force of will present in every minor league staff, filled with young people trying desperately to prove themselves worthy of a larger opportunity, from the clubhouse to the announcing booth, this is one of the frontlines. It’s where we might first see the changes in atmosphere make gains on the mechanisms allowing professional baseball to be conducted around it. Per climate data from the National Oceanic & Atmospheric Administration, portions of the mid-Atlantic saw rainfall up to 300 percent of normal levels from May through July. The 2014 National Climate Assessment projected continuing acceleration of rainfall totals in the northern United States, partly the result of warmer atmospheres capable of carrying more moisture.

In other words, for a sport built on the premise that tomorrow always figures to be a beautiful day for baseball, and that there should be as many baseball games as a calendar can possibly fit, it is going to continue to rain, and rain. Will we just play less? Are we doing that already? 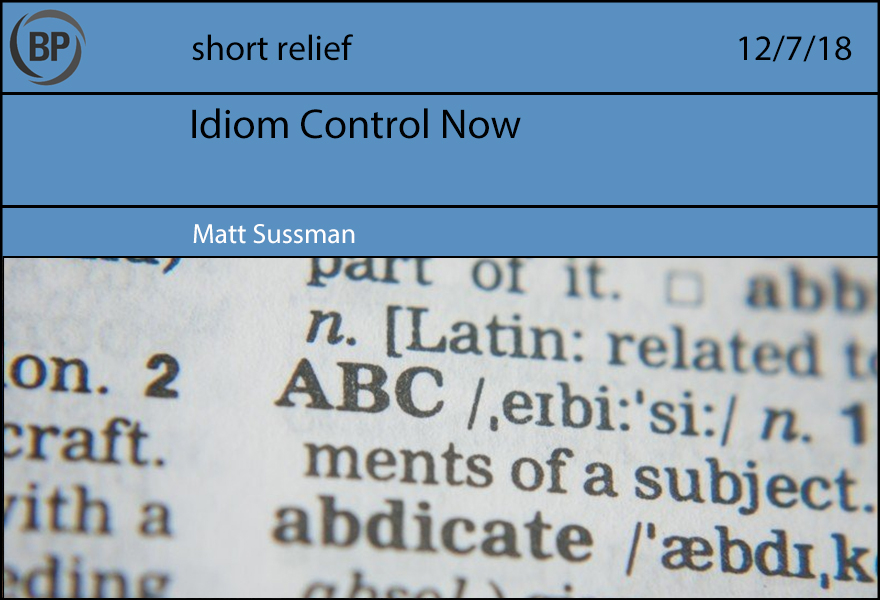 (In case you missed it)

Baseball language has been part of American speech for as long as baseball players have spoken, which is to say, a while, and much of it is swears. Its reputation as a timeless game has been a double-edged sword, as many of its phrases have carried derogatory connotations, ultimately misused. It leads the average citizen to believe that baseball is a game of clueless dolts, some of them belly-itchers. We’re just doing a small part here. 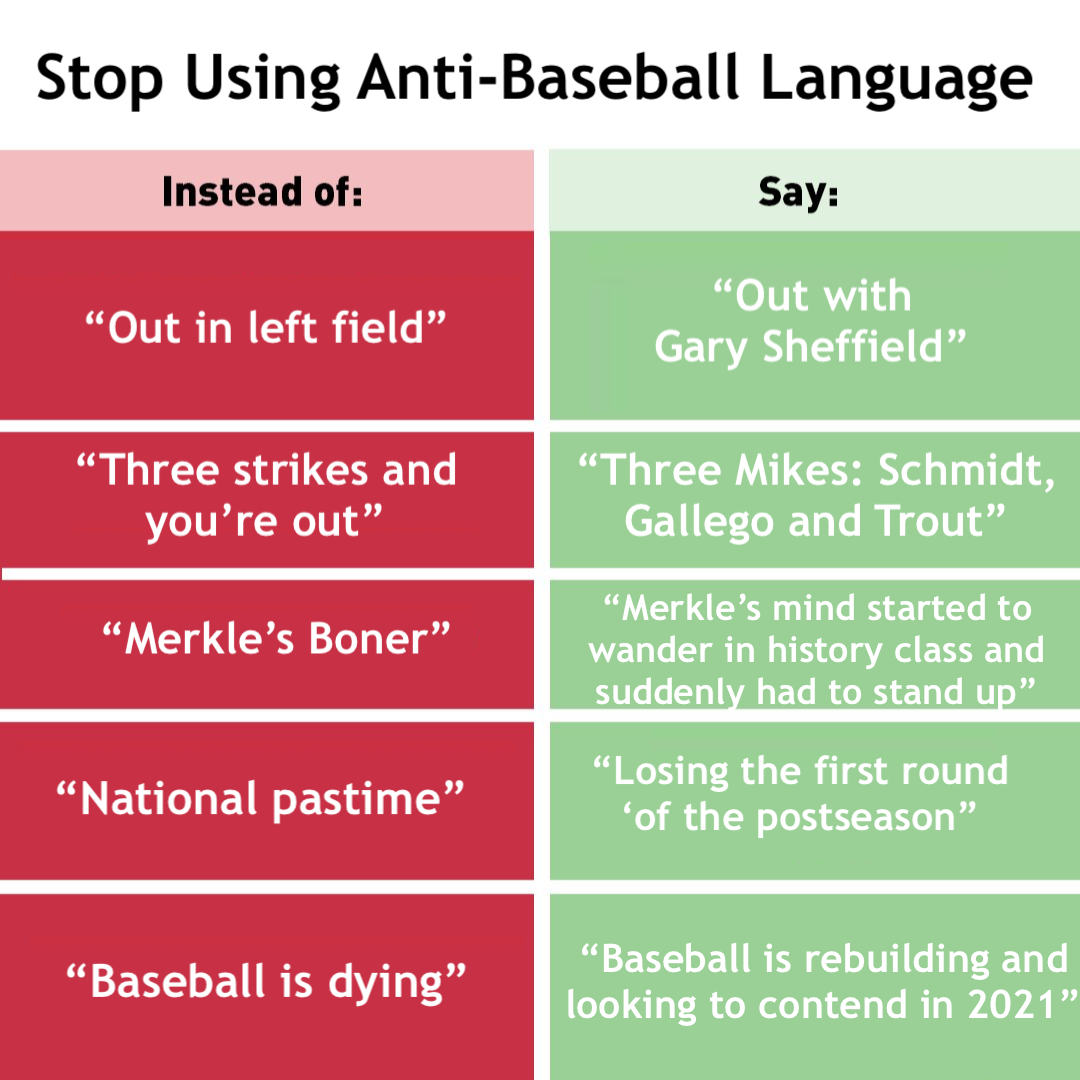 You need to be logged in to comment. Login or Subscribe
Mark Mancini
Loved the "Anti-Baseball Language" segment. BP never fails to deliver.
Reply to Mark
matthew smith
Didn't come here expecting something as affecting as Get Out. I hope there's always a space for things like this at BP.
Reply to matthew