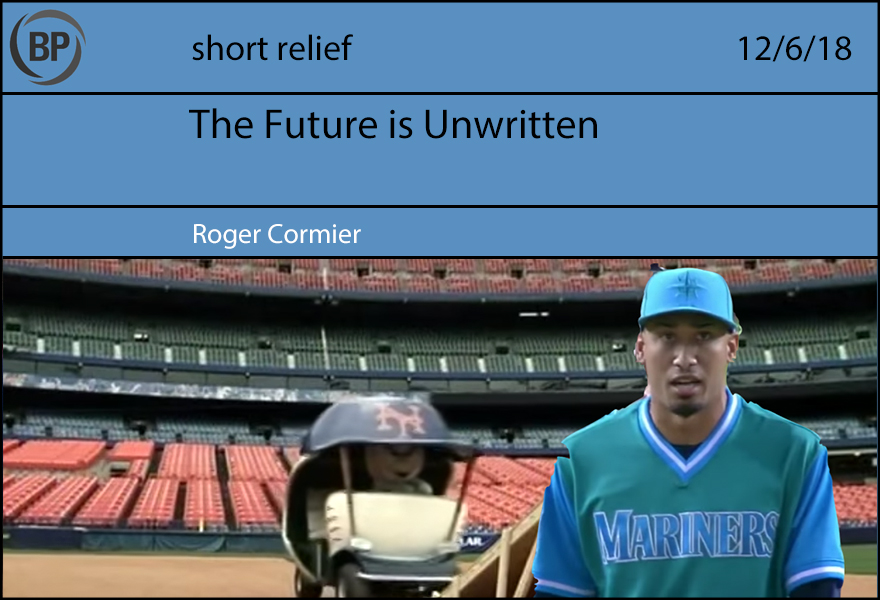 Psychologists Daniel Kahneman and Amos Tversky were so influential that “Moneyball” Michael Lewis wrote an entire book about them. Maybe the 23rd most interesting tidbit from the book about how our limited brains are out to destroy us is this: we greatly inflate the number of times in our lives we truly predicted a surprising event.

In the year 2023, Jarred Kelenic will be an All-Star. More than an All-Star. He will become the next Mike Trout. Trout will say “Jarred Kelenic made me a better player, person, and meterologist.” An oil painting of Kelenic following through on one of his many, many, many majestic home runs will be the main gift to the planet Neptune.

Some teams might be getting better at prognosticating the futures of human beings who themselves can’t even see themselves a few months from now, and new statistics, like, say, DRC+, gets us unwashed a little closer to the truth we cannot ever fully see. But the terrifying truth all front offices and/or people face is nobody truly knows what the future will hold and suffocate with its meaty paws.

With this in mind, I am saying with 100 percent certainty Edwin Diaz‘s arm is going to fall off.

I dreamed recently I was driving. Edwin Diaz was with me. I lied and told Edwin I was taking him to Disneyland. I don’t even remember if Disneyland is the one in Florida or the one in California. I did seem confident he would accept my offer, because Disneyland is expensive and he is still in his pre-arbitration years. But it was really all a trap because I was driving him to some hospital to get his bone spur removed.

Some folks call this “kidnapping.”

The spur in his right elbow was discovered in a physical examination taken soon after he was drafted in the third round of the 2012 draft. It has clearly never bothered him. Pitchers have pitched through them. I know this. I know the Yankees signed Masahiro Tanaka knowing he had one, and a few weeks after his second MLB season he had surgery to remove his and he did not miss any time because of it. I also know Strong Island native Steven Matz’s spur got so big over the course of the 2016 season he had to stop pitching by the middle of August in a pennant race and when he had his spur removed it was described as “massive.” I also know that Matz had arm troubles before and since, and Noah Syndergaard also pitched through a bone spur in 2016 and remained good. I know a lot of things, okay?

So I explained this to Diaz once he noted we were not going the right way to Disneyland nor Disneyworld, nor the Disney Store in Times Square. I brought up J.J. Putz, a former Mariner turned Met like himself whose bone spur in 2009 became so bad the team physician recommended surgery. The Mets recommended to ignore the physician. It ended poorly. Then Diaz asked if his name was really J.J. Putz. I confirmed. We both laughed. Then he ruined the nice bonding moment by calling the police.

As we suddenly sped down the highway at 120 miles per hour, the error of my ways became as clear to me as our surroundings became fuzzy. Why should I ask this nice young man to get a surgery he probably doesn’t even need? So what if he got it tomorrow and would probably be fine in time for Opening Day? I turned off the podcast I was never sure he was listening to in the first place and stared toward the future. “Que Sera Sera (Whatever Will Be, Will Be)”, I sang at the top of my lungs, somehow to the beat supplied by the shrill, tone-deaf police sirens. Then, Diaz sang along. I never saw it coming. 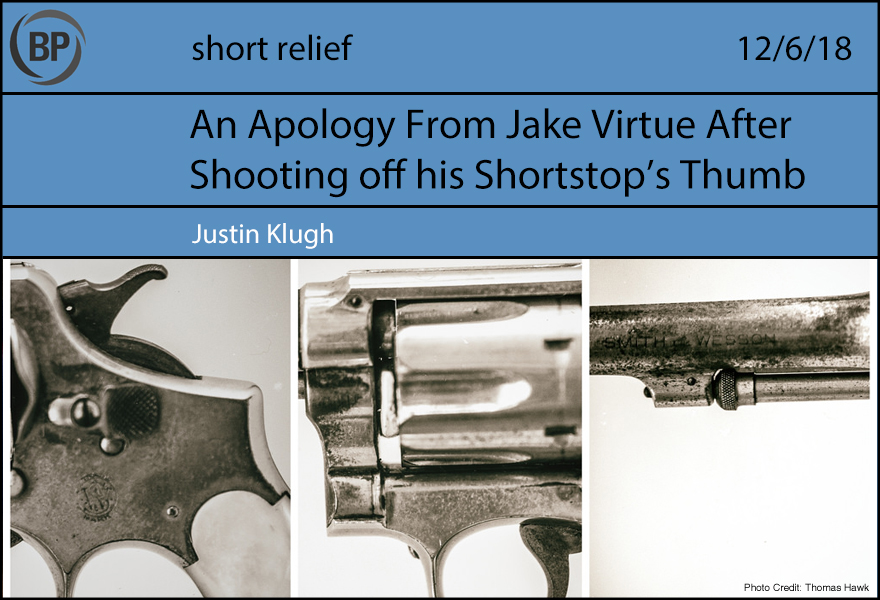 Obviously, I know how much Ed meant to this team — I’m sorry; you’re right, how much he means to this team. He’s not dead. In fact, I want to stress how very much alive Ed still is. It’s 1892; medical science has graduated to the point that a bullet wound is not a death sentence, even with a blown-off thumb. With the right prayer and a glass of pig’s milk, that thumb will be reattached in a quick 12 to 18 hours.

His presence will be missed, at shortstop but especially in the lineup, because he’s, you know, really good at hitting the baseball with the baseball bat. And it’s because of how noticeable his absence will be that coach asked me to say something to you guys while he went into his office and wept. So, here we are.

I can’t promise to make up for what Ed brought to the lineup with his bat, but I can promise you that I will work to prevent the other team from scoring runs with some of the finest first base work you all have ever seen. Right? Okay? All right! Let’s get out there!

Guys, I noticed I was the only one to run down the tunnel and out onto the field just now. I kind of thought we were all going to go out together, as a sign of solidarity and gun safety awareness.

What is it? I apologized, didn’t I?

I see you all looking suspiciously at my locker? Yes, the gun is still in there. Yes, it’s the same gun that Ed shot his finger off with just hours ago. What’s the big deal?

Is it that the smell of gun residue is lingering in the air that is reminding everyone of Ed’s horrible, horrible screams as he clutched the grisly nub that used to be a digit while blood spurted out in a way none of us have seen since the war? I guess I can understand that. But guns are so cool, you know? Just to like, have, and look at, and play with.

Here, watch; let me show you this trick I learned with it so you can see how safe it

Dang. Okay, in my defense, I had no idea the gun was going to go off again just now. I actually have no clue how it works, to be honest. So many moving parts. Fortunately, you don’t have to know about stuff like that before you buy one. Or just find it laying around.

Look, if I stop twirling it around on my finger like a gunslinger, will that make you guys feel safe? I can agree to that. Let’s just say I get two gun twirls a day, and that’s it. Well, three. I’m telling you right now I’m going to need at least three.

I can tell by the glowering stares I’m getting right now from everyone that it’s an agreement – four or five gun twirls per day, and that’s it. And if Ed… sorry, when Ed comes back, because he definitely will, I will do my best to twirl the gun only when he is not in the room, or when he is at least facing away from me.

All right. I think we’re in a good place. I’m really glad about the ten gun twirls per day compromise. I feel like the season is going to work out just fine. Let me just put the gun back down in my

Wow, these things really just go off for any reason, huh? Seems pretty dangerous. I’ll tell you what, why don’t I just get a few of my daily gun twirls out of my system now so I’m not thinking about them all game long.