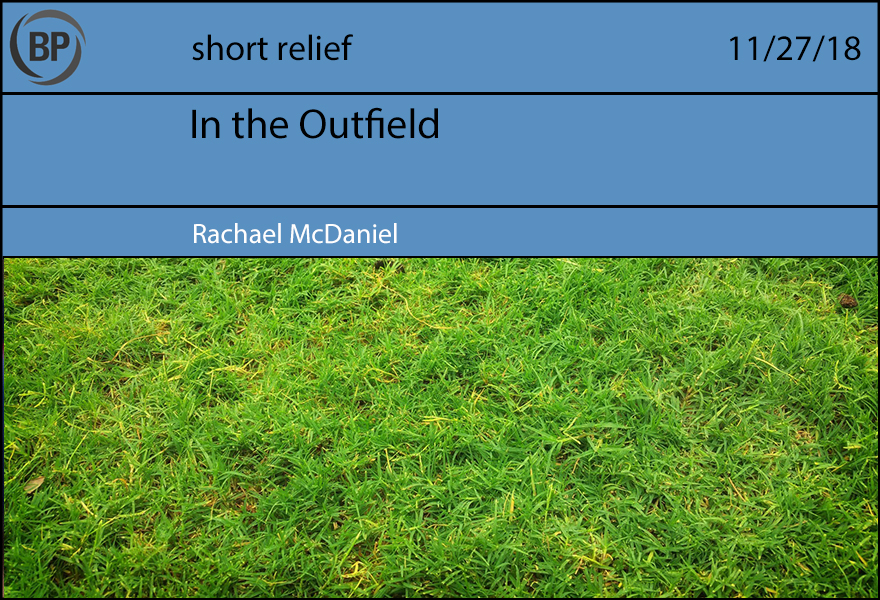 In the democratic, everybody-wins community softball environment I played in as a kid, everyone on a team had to play every position. A power pitcher could not pitch every game, even if they had the ability and inclination; you couldn’t force the same kid to play catcher every game. And on the extremely uncompetitive squad I played for, there was a near-universal consensus on which spot in the positional rotation was the one to hope for, the one to cheer when you got it and bewail when you didn’t. It was best to play the outfield.

Playing the outfield was the closest to not playing softball that you could get while still playing softball. At our young ages and low skill level, very few balls were ever hit past the infield, and those that did get past were mostly trickling ground balls that required little effort to hunt down. With favorable opposition, an inattentive coach, and a bit of good luck, you could pass several innings in blissful inactivity, enjoying the sun and your own company. On more than a few occasions, players missed easy fly balls because they had been lying on their backs in the grass, eyes closed, resting peacefully.

I resented these players deeply. There was nothing I hated more about softball than playing the field. Every time I was assigned to the outfield, even though I knew that it was a rotation and everyone had to play every position, I still interpreted it as exile. I always felt like was being made to do penance — for allowing too many walks in a previous game, or for allowing a run to score on a wild pitch, or any one of the other errors so prevalent in softball for small children that they likely remained unremembered by anyone but me.

As my teammates spun around with their arms in the air, I stood out in right or left or center, knees bent in a tense caricature of flexibility, anticipating in every moment fly balls that never came and throws to the plate that were never necessary. Time slowed to a crawl. I stared in longing resentment at whomever happened to be pitching. I went over every play I’d been involved in, lingering on the mistakes, and cursed myself for my unbearably incurable imperfection. It was lonely out there, and when the third out was recorded, I felt the relief of a drowning man grabbing hold of a lifesaver.

It’s been a decade since I played softball. I haven’t seen the sun in four days at least. I sit indoors, staring at my screen, and think of myself at age nine, standing in the outfield in the sun, playing my favorite game, bitterly resenting every moment of it. My teammates had the right idea, after all. 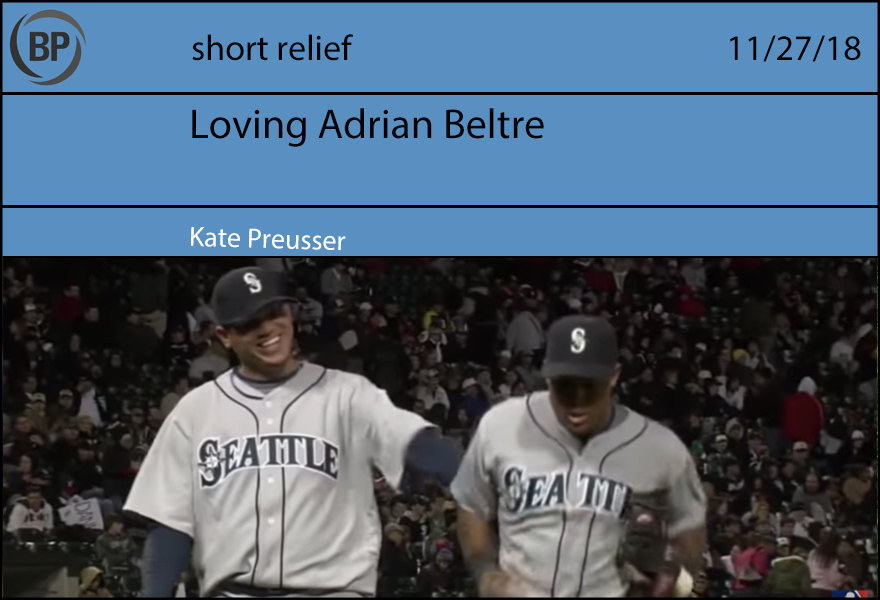 There is not a lot of connective tissue between the early and late periods of my baseball fandom. I moved away from Seattle in my early twenties, and with it left my Mariners fandom largely behind; my favorite player, Edgar Martinez, retired, and it felt like a good time for me to retire, as well. (This was before the advent of streaming services, back when MLB.tv was just a fuzzy glimmer in the Commissioner’s eye, back before cable packages that allow for watching Indonesian test cricket at 4 AM.) I left Seattle as Adrián Beltré entered, and so all I knew about him as a Mariner came from Sunday night phone calls with my dad, who would recap the week of baseball games in exacting detail. Good defenders are my dad’s second-favorite baseball players, and he would devote a solid twenty minutes, at least, to breaking down Beltré’s wizardry of the week.

Pitchers, however, are my dad’s first-favorite baseball players, and gradually the conversation focused less on Beltré and more on an intriguing young pitcher named Félix Hernández. And so the two are forever connected in my mind: twenty minutes on Beltré, another twenty on Félix. Double that if Beltré had, as he often did, made an incredible play at third to bail Félix out of a sticky inning. There wasn’t a lot else to talk about with a 60-something win team, but he filled the time anyway, like a professor with a lecture assignment.

I think he thought if he talked enough, his words would build a bridge from Seattle to Philadelphia, one I could walk home on; if he caught me up sufficiently on the Mariners, it would be like I never left. We went to games when I came home in the summers where he expected me to greet players like Wladimir Balentien or Jeff Weaver or Erik Bedard with the same degree of familiarity as other franchise icons–to be fair, a familiarity one might expect if one had been dissecting, among other things, pitchers with plus-5 ERAs. I never recognized any of them but Beltré and Félix.

Beltré was only a Mariner for four seasons, but when he eventually became a Texas Ranger it was like having a good friend move out of the neighborhood but not change schools. The Beltré-Félix dynamic became codified, performative, a ritual enacted each game where the two teams met head-to-head: a best-friends’ pageant. Love takes many forms, from good-natured ribbing to a three-hour phone call analyzing the holes in the swing of Jose Lopez.

As I have grown older, I have come to appreciate more the audacity of Adrián Beltré: his insistent iconoclasm in a sport where the daily grind constantly threatens to flatten out players’ individuality, the attention and respect he commands in a world that is not predisposed to giving people who look like him attention nor respect. Félix may be known as King, but there is something ineffably regal about the way Beltré carries himself, the effortless way he can switch between an easy jocularity and locked-in at the plate. So, too, as I have grown older, do I appreciate more and more the defiance of Beltré not just of baseball’s sleepy behavioral norms, but of time itself, as he strode out to third base on legs quickly approaching their fourth decade. Like septuagenarian marathoners, Beltré manning the hot corner at age 39 served as a reminder of the limitlessness of the human body, how far discipline and will and strength of spirit can carry someone. It reminds me of my father calling me each week and willing me home, each word a brick in that bridge. It reminds me of the many forms love can take, across time and space. 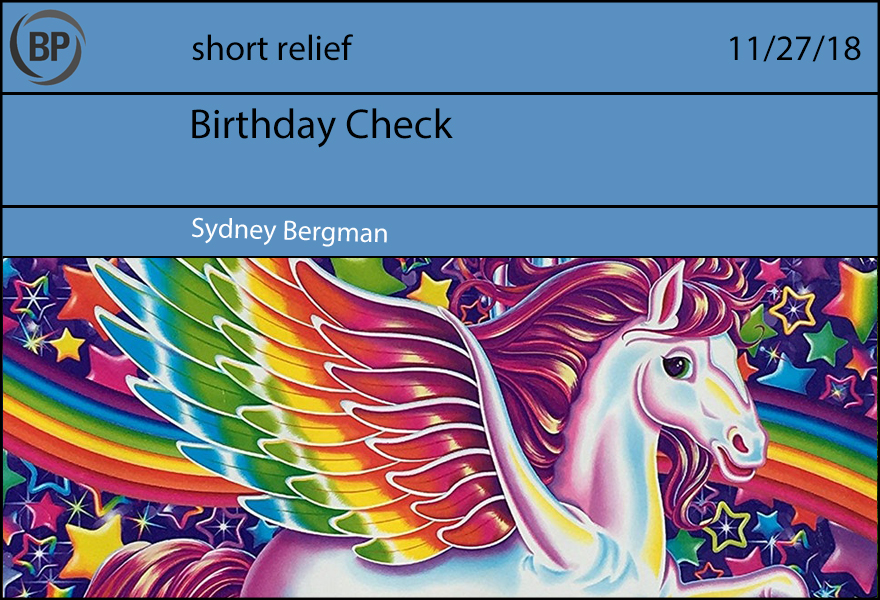 It’s my birthday on Saturday, and you’re all invited to the party. By ‘all’ I do mean just Major League Baseball. Oh, you can’t make it? A $5000 check should do nicely. Just make it out to my byline and overnight it in a card — I prefer something with a Lisa Frank aesthetic. (Honestly, the Lisa Frank Aesthetics sounds like an actual minor league team.)

What have I done to deserve a $5000 check? Nothing much really, but I hear that the MLB is just issuing those now when they’re invited to do so, so I thought I’d give it a try.

One major thing stopping them from giving me the money, though, is that I’m not running for U.S. Senate. In fact, I bet my politics are pretty different from Rob Manfred’s. Exhibit one: I think paying minor leaguers below minimum wage is abhorrent and a tarnish on the whole sport — and Manfred and the League spent a good amount of time and effort “saving America’s pastime” from the indignity of paying a living wage.

But is having politics the MLB disagrees with enough to disqualify you from a check that’s five-eighths of what the average minor leaguer makes in a season? It didn’t seem to be for U.S Senate hopeful and segregation and Confederacy enthusiast Cindy Hyde-Smith — that is, until people noticed. It’s an easy-to-make mistake. Who among us hasn’t accidentally sent in a check for more than 50 percent of a minor leaguer’s salary to someone with whom we fundamentally disagree?

The thing is, MLB likely doesn’t disagree with Hyde-Smith’s politics, at least not as they pertain to what the League holds important — itself and its bottom line. They put their money where their mouth is and only rescinded the contribution once what came out of Hyde-Smith’s mouth became, for them, a PR problem.

So, if they’re in the business of issuing checks to people who don’t work for them in order to withhold fair payment from people who do, add me to the list. I promise that I won’t vote against MLB-friendly legislation in the Senate, and that’s a campaign promise I can probably keep.