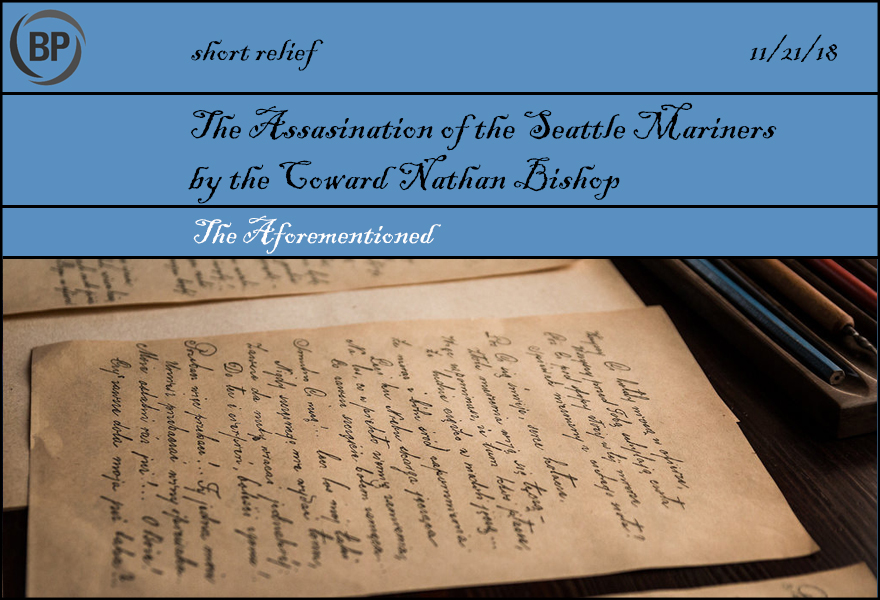 To Those Concerned with Such Matters,

As the Seattle Mariners lie coughing, bleeding, dying at our feet, I stand here, before all, to confess of the murder. I loved them once, long and true, through our years of plenty and our long seasons of want. We rejoiced together during The Double, 116 Wins, Ichiro, Felix, and more. Life is life, though, and we saw a lot more bad than we have good. Still, we had each other, and we were happy, or at least convinced ourselves we were.

I don’t confess to know exactly when the rift formed between us. Not much of our lives changed much over the years. Looking back, maybe that’s part of the problem. Our emotional expanse seemed forged by and at the speed of the forces of the eons; so slow we never saw it happen, so unstoppable and powerful there was no undoing it once it was done.

What I do know is, over time, I came to despise the Mariners truly. Not any one player, or front office executive, no. This was no distaste formed by some minor triviality, nor minor tic. This was something deeper, longer, more whole. Long periods of closeness don’t allow for much in the way of ambivalence, and when the deep groove my love for the Mariners had worn within me was finally fully vacated, it seems hate was all too happy and eager to rush in like a loosed flood, and fill all that space with its bile-filled sting.

I confess to bending my will and thoughts towards my ultimate end: The destruction of the Seattle Mariners as we have known them. I wanted them gone, removed, vacated from this earth. The very sight of their utter, boundless mediocrity became an affront to me. To be surrounded so omnisciently by such averageness made me feel in some way average, and in my titanic self-delusion I believed myself worthy of better. While I may not have personally pulled the trigger that sent the fatal rounds hurtling towards their flesh, I have spent hours in shadows, with my hate and machinations, seeking to deny them further existence. And I planned well.

As my plans, efforts, and well worn designs see their fruition; as trade after trade deprives the team of the lifeblood that has coursed through its veins, I look over the body, and have but one regret: As I stand triumphant, as all I have wanted plays out before me, I feel deep, deep sorrow. Vengeance is indeed a hollow feast. 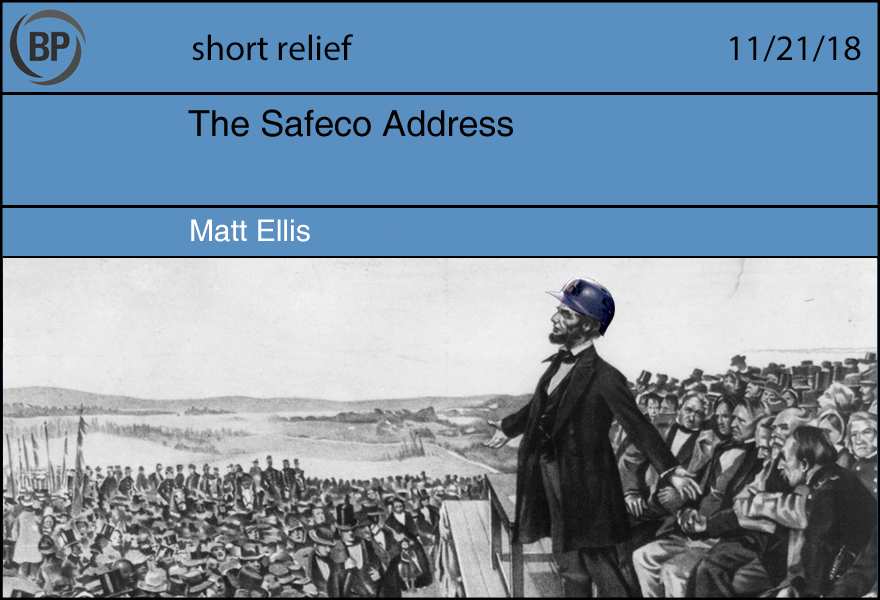 #Mariners and #Padres indeed have discussed a trade that would send Mike Leake to San Diego, source confirms @Ken_Rosenthal’s report; Ken reported that Jean Segura (to #Padres) and Wil Myers (to #Mariners) have been discussed in the talks. @MLB @MLBNetwork

Four score and one year ago our fathers brought forth in this state, a new franchise, conceived in Liberty, and dedicated to the proposition that we are just as good as the rest of those jabronis on the East Coast.

Now we are engaged in a great civil war, testing whether that team, or any team so conceived and so dedicated, can long endure. We are met on a great battle-field of that war. We have come to dedicate a portion of Safeco Field, as a final resting place for those who here gave so much time that that project might live. It is altogether fitting and proper that we should do this. Except for Robert Andino, he can screw off.

But, in a larger sense, we can not dedicate — we can not consecrate — we can not hallow — this ground. The brave men, living and dead, who struggled here, have consecrated it, far above our poor power to add or detract. The world will little note, nor long remember what we say here, but it can never forget what they did here. It is for us the living, rather, to be dedicated here to the unfinished work which they who fought here have thus far so nobly advanced. It is rather for us to be here dedicated to the great task remaining before us — that from these honored dead we take increased devotion to that cause for which they gave the last full measure of devotion — that we here highly resolve that these players shall not have withered away the last years of their arbitration in vain — that this nation, under God, shall have a new birth of freedom — and that a team organized around the will of the people, by the people, for the people, shall not perish from the earth.

You need to be logged in to comment. Login or Subscribe
Llarry
Not "Four Score and One", TWO Score and one. The team appeared in 1977, not 1937. Other than that, nicely done (though Robert Andino might think otherwise)
Reply to Llarry
frank noto
Bishop is amazing.
Reply to frank