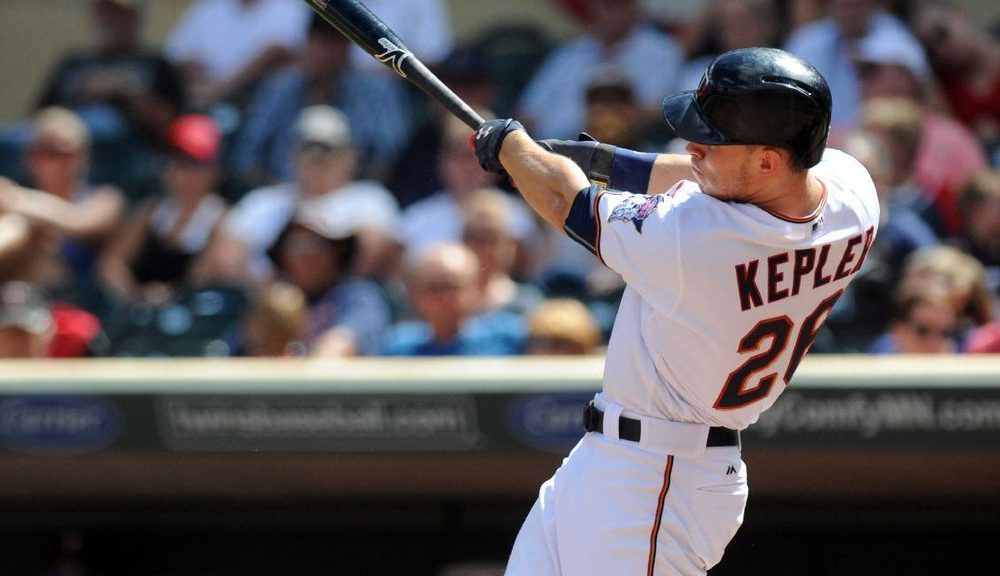 It was Johannes Kepler (the German mathematician, astronomer, and philosopher) who first laid the groundwork that became our Newtonian understanding of planetary motion. Kepler realized, and first described around 1600, that planetary orbits weren’t circular, but rather, elliptical. There might not be a more crucial figure in the history of European scientific thought than Kepler, because he defended and empirically explained the theories of Copernicus, and because he built bridges between the disciplines of astrology/astronomy, physics, and philosophy that altered the very arc of discovery. Less famous than Galileo and Newton, Kepler made both of their works possible and creditable.

Max Kepler isn’t, as far as I can tell, a descendant of Johannes, but in the universe of the Minnesota Twins, he might be equally important. For years now—since the original departure of Torii Hunter, really—the Twins have cast about unsuccessfully for someone around whom to build an outfield. They’ve been looking for structure out there, and have only briefly and intermittently found it. One problem might be that, for too long, they’ve been looking for someone like Hunter, or like Kirby Puckett before him. That’s a simple, Copernican concept of the gravitational properties of an outfield. It might be that, like our Keplerian solar system, the right solution requires an unseen second focus, a two-pegged center of it all.

If that’s true, it’s almost certain that the second focus of the Twins’ next great outfield is out there somewhere, waiting to be fitted into the picture. Eddie Rosario’s tantalizing, Guerrerian ability to hit any pitch hard to almost any part of the park hasn’t yet been enough to fully, consistently overcome his poor instincts and hacktastic approach. Byron Buxton’s tools make him the guy to dream on, but his track records for health and contact rate make him a tough guy to bet on. Kepler, however, fits neatly into this imagined cosmos.

That assertion requires some defending, because Kepler’s development has, ostensibly, been frustrating. Our editor-in-chief, Aaron Gleeman, wrote a long essay on Kepler for the Twins Daily 2019 Offseason Handbook (which you should buy, since you can name your price and the thing is both gorgeous and chock-full of good information), and he raised legitimate concerns about the lack of forward progress from the German wunderkind.

Kepler’s left-handed bat hasn’t yet packed the pop for which one might hope, given his thin but not gangly 6-foot-4 frame. Taking his surface-level numbers at face value, he stands alongside hitters like Mark Kotsay, Jose Tabata, and Gerardo Parra—guys who came up and held their own right away, but didn’t really mature into offensive weapons. With input from noted hitting guru and Twins Daily writer Parker Hageman, Gleeman mused that Kepler’s swing might not be modular enough—that the angle at which his bat moves through the hitting zone gives him a small margin for error, if he wants to connect solidly.

Here, then, are my five reasons why the Twins should prioritize Kepler over Buxton and Rosario; sign or trade for another well-rounded outfielder; and make them the two foci in a renovated outfield next year.

In an article earlier this month about Kansas City’s Whit Merrifield, I concocted a simplistic yet holistic offensive stat. It centered upon three factors: hitting the ball hard (within the most productive band of launch angles), walking, and not striking out. In this quirky little metric, Kepler fares even better than Merrifield. He stands, in fact, shoulder-to-shoulder with Bryce Harper, and the player to whom Kepler maps best in the three factors individually is Andrew Benintendi.

It’s speaking slightly out of school to mention this, but I’ll do so anyway: we will soon be rolling out a new offensive value metric at Baseball Prospectus. This is the brainchild of Jonathan Judge (with help, of course), and follows many of the same principles as our industry-leading Deserved Run Average for pitchers. We’re calling it Deserved Runs Created (DRC, for short, and it will nearly always be rendered in its adjusted rate form, DRC+), and in the opinion of that model, Kepler actually made a significant forward leap in 2018.

When Hageman talks about hitters, I make it a habit to nod and keep my mouth shut. There’s some evidence, however, that Kepler has fixed the swing problems described above. On pitches low in and just below the zone, Kepler made contact on nearly 83 percent of swings in 2018, up from 69 percent in 2017. His average launch angle and average exit velocity on batted balls down in the zone were both significantly higher in 2018, too. On pitches up in and just above the zone, his contact rate was slightly down, but exit velocity was, again, sharply increased. He especially handled high fastballs better in 2018.

Indeed, given his contact rate on pitches in the zone, I think the criticism about his having a small margin for error is unfair, or at least outdated. He just needs another year of finding that feel for the barrel and getting ever-so-slightly more into some of the fly balls he’s now generating.

There’s no question that Buxton, with his elite speed and great jumps, is an exceptional defensive center fielder. Because their development has so much overlapped, though, it can be easy to overlook just how good Kepler is, too, even when he must take over center field for an injured or ineffective Buxton. All four major defensive ratings systems had Kepler as well above average in 2018, and again, that’s not only when he’s confined to right field. He’s not merely good; he’s one of the dozen best defensive outfielders in the American League.

This is related to the first two reasons, but distinct from them in its specific focus. Kepler had a strikeout-to-walk ratio around 2.35-to-1 in 2016 and 2017 combined, but in 2018 that figure improved to 1.35-to-1. In the last 10 seasons, only 16 25-year-olds have had that low of a strikeout-to-walk ratio while also posting an isolated power in excess of .150. There are plenty of guys on that list to whom Kepler shouldn’t be directly compared, because (despite his .184 ISO in 2018) he’s just not their caliber of power hitter, but his control of the strike zone (and in particular, the way it’s improved so dramatically in so short a time) is undeniably encouraging.

The Value of Certainty

No matter on which of the three incumbent Twins outfielders you’d most like to bet, Kepler is clearly the most reliable. If an outfield really is akin to a planetary orbit, one needs two reliable foci to serve as the anchors of it, and Kepler can be one of those. If one believes DRC+ and its spin on WARP, Kepler is already one of the 30 best outfielders in baseball. If he improves further at the plate, as the trend lines in his performance suggest that he can, he matriculates into the territory of the true stars. Unlike Buxton and Rosario, he provides production in all three aspects of the game, and he’s reliable in a way they aren’t.

Buxton is the Galileo of this group: he makes for the best story, threatens to blow up the world as we know it, but ultimately. has mostly been debunked. Rosario is Newton, full of enthusiasm and cocksurety but kind of derivative, when you boil him down to his essence. Kepler is Kepler, and that might seem underwhelming at the moment, but it’s going to be good enough, if the Twins just allow it to be.

You need to be logged in to comment. Login or Subscribe
sbnirish77
" If one believes DRC+ and its spin on WARP, Kepler is already one of the 30 best outfielders in baseball."

Not one of sabermetrics shining moments :)
Reply to sbnirish77
Mac Guyver
I think a lot of false conclusions get drawn from EV. I think it is a better way to measure raw physical ability than baseball skills that translate to games.
Reply to Mac
Mac Guyver
Minnesota has an incredible track record of doing a miserable job of development with young hitters. I don't like to blame an organization or a hitting coach or anything like that generally, but you name the young player that has come up in the last 5 years and we can talk about his problems with approach. Buxton and Sano are the shining examples of this, but Eddie Rosario is held back by his approach as well. Not long ago they squandered an opportunity on Oswaldo Arcia who was a young slugger that fell apart. Aaron Hicks never hit in Minnesota, although that wasn't due to swinging at everything he saw - perhaps he was too passive? Maybe Kepler has what Hicks had? In any case, I really do think that this organization does a terrible job with hitters (and infield defense, but that is another story). The White Sox have an equally troubling track record with developing hitters. Those two are at the top of the heap.
Reply to Mac
deadheadbrewer
Good article, Matthew. Even when Kepler was in a groove last year, Molitor just kept trotting him out in the six-hole, regardless of the fact that few of the hitters above him were likely to have a better offensive game that day. I'll be interested in how the new coaches treat Kepler, as it seems like he's quietly putting it all together, as Matthew illustrates here. And to the developmental points in the comments above--yes, I cannot wait until all the old-school coaches and philosophies of the Ryan-Smith regime are finally flushed from the Twins' system. Those ideas seem to have squashed quite a few players' developments.
Reply to deadheadbrewer
Jay Stevens
Could Kepler be one of the players the "launch angle revolution" hurts? That is, hitting more fly balls works if you can put a number of them out of the park, but Kepler's HR/FB rate plummeted last year, so more fly balls = more outs. Or am I not taking how hard he's hitting balls into account, and what we saw was bad luck?
Reply to Jay
Pat Folz
You might be onto something. Statcast has his exit velo, barrel% and hard hit% up from 2017, but his launch angle was also quite a bit higher - seems like he's hitting higher but without quite enough juice to put it over the fence. For what it's worth, HR/FB is usually pretty stable so he might be in line for a bounceback... unless they broke him for good.
Reply to Pat