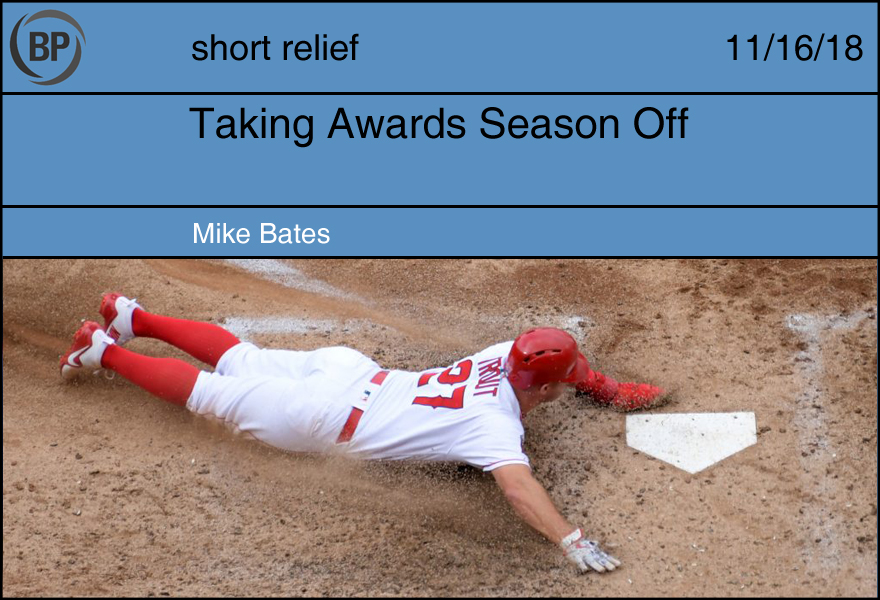 Whatever is a baseball writer to do? Mookie Betts and Christian Yelich each took home MVP awards last night. The night before, Blake Snell and Jacob deGrom took home Cy Young honors. And earlier this week Shohei Ohtani and Ronald Acuña were rewarded with Rookie of the Year awards.

Look, I’m from the old school where we’d get at least two rip-roaring columns out of torching the BBWAA’s suspect judgment. Where we’d point out that Juan Gonzalez’s RBI totals were inflated because he played in Texas and hit behind three guys with an OBP north of .350, while playing a corner outfield position poorly three-fourths of the time. Where we’d say that Bartolo Colon’s 20 wins were nice and all, but his 3.48 ERA couldn’t hold a candle to Johan Santana’s far more dominant and strikeout-heavy performance in more innings. Where we’d mock the idea of immortalizing Chris Coghlan when J.A. Happ, Tommy Hanson, and Andrew McCutchen were having demonstrably better inaugural campaigns.

What am I supposed to do? Am I supposed to get angry because one guy from San Diego still wants to live in a world where pitching wins are still venerated like we don’t know anything about run support? Should I write a screed because Nick Piecoro was the only one who thought that deGrom was the most valuable player in the NL? Should I stump for pitchers to win the MVP, because they’re fricking eligible, dammit, even when someone as clearly deserving as Yelich gets to take home the hardware?

No. No, I’m not. I refuse to feign outrage over unimportant or imagined sleights. Instead, I’m going to write with real outrage over the lack of anything to write about. The BBWAA, through its obnoxiously younger and more engaged membership, and its maddeningly good decisions is putting people like me out to pasture. It’s not fair. They’re messing with my livelihood. And until they get back to basics and giving Cal Ripken a single 10th place MVP vote for a 10 win season in 1984, I’m on strike.

To hell with all of them and their competence. 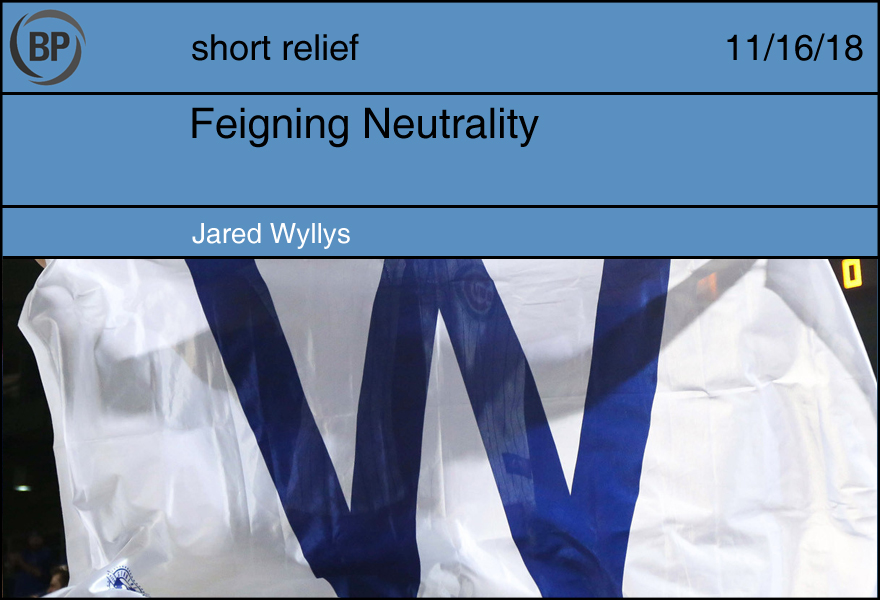 Early on, I was a mutt when it came to baseball fandom. No rooting interest was passed down in my family, so I was free to cheer as I pleased. I grew up compelled to root for the nearby Tigers and liking the Braves because they were really good and eventually falling in love with the Cubs because for a long time they felt relatable, as well as always on TV. But at some ill-defined point, probably around 2004 when I first sat in the stands at a game at Wrigley, I was finally decisive about it and became a Cubs fan, shedding the others.

Fandom to me then meant having your footing, meant knowing who your people are. These guys are good, those guys are bad. A bit of self-identity.

But in “The crowd at the ball game,” published nearly 100 years ago, William Carlos Williams described the sometimes dark and even sinister nature of the groupthink that can pervade fans at a sporting event. Williams even goes so far as to liken it to the Spanish Inquisition and the French Revolution.

So in detail they, the crowd,
are beautiful

for this
to be warned against

saluted and defied—
It is alive, venomous

In short, being fans — despite the objective frivolity of what it is we are rallying around — holds tremendous power over us, and it can at times collect an ugliness in us otherwise dispersed.

Being a fan of a team in any sport and at any level often fosters togetherness and joy — any of us who have high-fived or hugged a stranger in the seat next to us following a big play knows this — but that should not lead us to ignore what we know to be basically right or wrong. In the southwestern suburbs of Chicago, well over 30,000 people voted last week for an openly neo-Nazi candidate. I like to believe that it wasn’t because they themselves were Nazis, but because they blindly voted for that little letter listed next to his name on the ballot. Either way, it’s ugly.

My experience in the last two years has sort of returned my fandom to its mutt-like roots. Early in 2017, my writing career reached the point where it provided me press credentials. There’s no cheering in the press box, and as I learned quickly, it is very hard — even internally — to root against a player or a team you’ve just spent time with in the clubhouse prior to a game. It’s a feigned neutrality at first, but eventually when David Bote hits a walk-off grand slam with two strikes and two outs, I’m happy less because “my” team won but more because it means I have a better story to write.

Fandom to me now isn’t quite what Williams described, not always so bloodthirsty. Blind allegiances should always be guarded against, but some self-identity in colors, stripes, and logos is healthy. The simplicity and safeness of cheering for one and against the other in the context of sports can be a worthy salve against the rest of life. I don’t root for the Cubs any less now, but almost paradoxically, I can’t root against anyone else. I’m happy being a mutt. 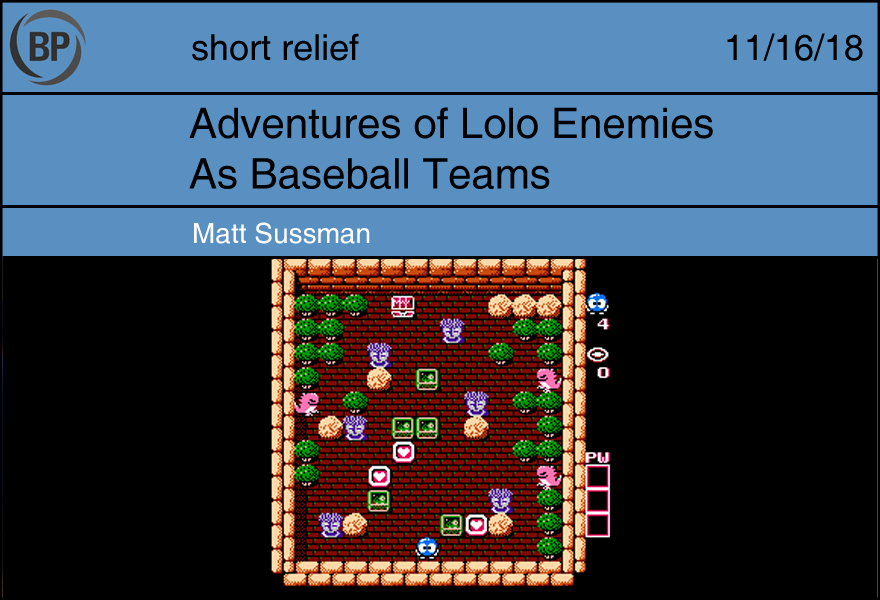 On the surface, the puzzle strategy game Adventures of Lolo doesn’t seem much like a baseball game. Moving around blocks, dodging enemies, collecting hearts and finally grabbing the contents of a treasure chest doesn’t sound at all like sports. Then again: The game isn’t timed. Lolo is usually by himself against an entire field of opponents. The room is round and so is a baseball diamond. Not to mention each of the enemies having distinctive baseball team-like qualities.

Snakey – This enemy literally does nothing. It doesn’t move. It doesn’t hurt to touch. It gets in the way sometimes but it’s easily pushed around and used to complete missions. This is the entire AL Central of enemies.

Rocky – This enemy walks around and can push you into harm’s way or pin the hero into a corner, forcing one to forfeit the level. You’d think this is textbook Colorado, when his awkward squarishness is classic Angels.

Leeper – These little critters bounce around the screen until they touch you, then immediately fall asleep. If those aren’t Oakland Athletics, I don’t know what are.

Gol – These dragons sleep silently until you collect all the hearts in a level and need to get to the treasure box to clear the stage. Right when you collect the hearts, they awaken and start breathing fire if they cross your line of sight. A better name for Gols would have been San Francisco Giants.

Skull – Like Gols, they just sit there and do nothing until the treasure box opens, then scamper around wildly. You think you can outrun them, it’s just a head of bones. You thought wrong, for they contain the spirits of St. Louis Cardinals.

Alma – I don’t mind these all too much. They’re little armadillos that just run and roll around, but they’re pretty easy to dispatch and don’t show up in numbers. That’s a Tampa Bay Ray for you.

Medusa – Real talk, there has never been an enemy I despised more with all my being than the Medusae from Adventures of Lolo. They just sit there but if you are in their line of sight horizontally or diagonally, they immediately hit you with a gaze and a life is lost. I think it’s the sheer immediacy of the kill, followed by the fact that sometimes you think you’re safe, then ZZZZZOOOMPH. Dead. Not unlike an inning in Yankee Stadium.

Don Medusa – Just like a Medusa except they move, which, get right the hell out of here. Despicable abominations who can’t do anything wrong. The 2018 Red Sox would like to have a word with you.