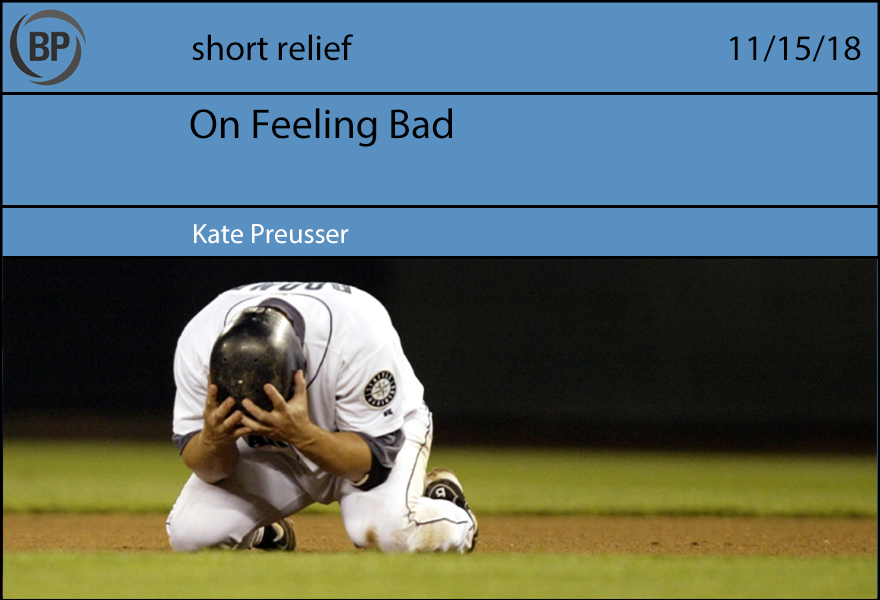 People ask me what I do in winter when there’s no baseball. I’ll tell you what I do. I stare out the window and wait for the sea to rise up and swallow me.

This is a dramatic statement, I recognize. It’s the kind of statement we’re prone to making in 2018, a year of the worst and most extreme promises fulfilled, hyperbole made into just -bole. “Wouldn’t that just be the worst,” we remark over drinks, and then fire up our handheld glowing hell scrolls to find out that the worst has, in fact, happened, and in ways that are new and different and even more hellacious than we could imagine, like we’ve all suddenly been switched out of General Drudgery into AP Horror. The days are shorter now, the weather colder; there is more time to spend inside, without the glorious three-hour distraction of baseball games. Bring me the head of everyone who claimed baseball is boring on a platter; what I wouldn’t give to be bored by a winding, low-offense, extra-innings day baseball game right now. I’m very sad that last year, somehow forgetting that there would be a this year, I watched all the Hallmark Christmas movies in existence and now there is nothing else mindless and comforting to distract me from thinking about the preponderance of natural disasters and gun violence and the rapid growth rate of the Great Pacific Garbage Patch.

Speaking of Great Pacific Garbage Patch, folks, have you heard about the Mariners?

Sometimes I talk to myself like this, like a stand-up comic; I am not a particularly funny person, although I have my moments, but I admire the ability of stand-up comics to yell, loudly and using as much profanity as they deem necessary, in semi-public spaces without getting arrested. It seems cathartic. I try out my material on the cat. He gazes at me sleepily and then begins licking himself in earnest.

Stand-up comics are often deeply wounded people; their wound is where they work from. They take the pain place, poke it, and report back. If Hallmark movies are about feeling good, stand-up comedy is often about feeling bad. I can feel my Mariners fandom, in the way I think and write about the team, starting to shift to that wounded place. The losing never bothered me all that much; someone has to lose, and the Mariners of 2002 – on were so bad that the losing was almost an art form, much like the baseball equivalent of the 1995 film Showgirls, a movie so deeply steeped in its own failure it features an un-ironic moment where the main character suggests to another character during a lapdance that he “check” to see if she’s on her period.

But this latest failure—the former Director of High Performance Dr. Lorena Martin’s allegations of sexism and racism rife throughout the Mariners organization—isn’t the fun or familiar kind of failure, the sad-sack Charlie Brown-iness of the Same Ol’ Mariners as we’ve come to know them. It is an indictment of an organization that, at best, is guilty of extreme employee mismanagement, and at worst, is steeped in the sexism and racism that are the very things I look to baseball to escape. The fact that this comes on the heels of the revelation that the organization retained, sheltered, and promoted an executive accused of sexual harassment–one who still has a public-facing role with the organization–only exacerbates the fissures that have been growing between a long-suffering fanbase and a team that can’t seem to get it right on or off the field.

There is nothing about this that is fun, as I stare out my window and dread spring, but also dread what might come tomorrow, what new story or revelation. It is exhausting, and it is sad, and I am already so very sad, so very exhausted. 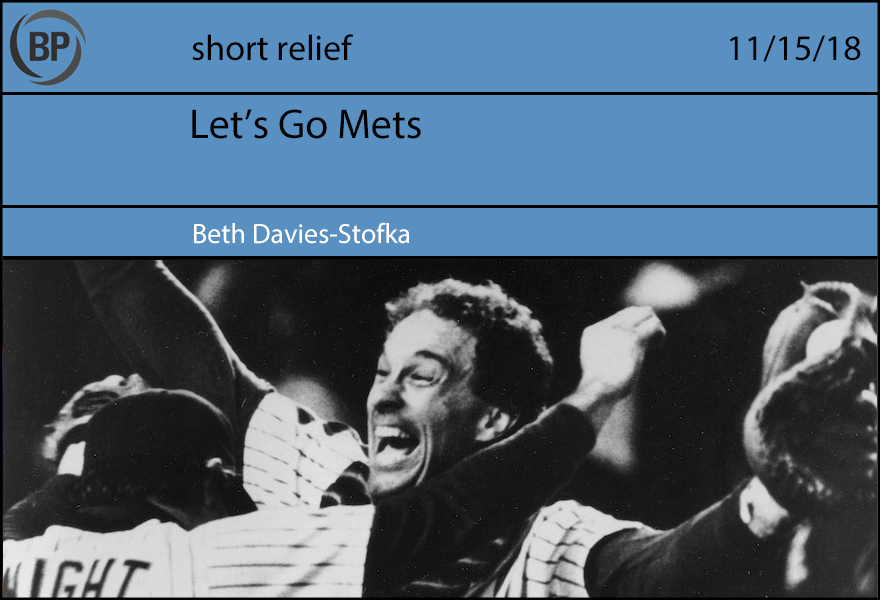 I have a signed photograph of Gary Carter that came from a flea market in the Bronx. Carter is in his Mets uniform, his big swirly signature displayed across the V- of his short-sleeved jersey. I’ve never had the signature authenticated because it doesn’t matter. It was an amazing gift from a true pal, a lifelong Red Sox fan who listened to me talk endlessly about Gary Carter and the Mets for the entire 1986 season (even if he didn’t go with me to the ticker-tape parade).

The photograph hangs on the wall in my office, a wormhole back to that joyous summer. Carter and the ’86 Mets introduced me to baseball. I didn’t know anything about Carter’s personality, but I knew that whether behind the plate or standing at it, he was piling on the victories. From my adoring perspective, Carter was the Met’s center of gravity. Each victory ran downhill in some way toward him, and I loved him for it.

Bleacher seats at Shea Stadium were affordable in those days, even for seminarians, and my girlfriend and I would take the red line from 125th and Broadway, transfer to the purple line at Times Square, and ride into Queens. We didn’t notice weird, dilapidated New York City and we never noticed that the subways were smelly or dirty. Not on game day!

Sometimes I would buy a program, and one evening, thumbing through the pages, I noticed an ad from a store in Times Square selling sports memorabilia. “Hey!” I thought. “I could get something small, like a pair of wristbands!”

I couldn’t wait to wear my Gary Carter number eight wristbands, but it turned out that the shop sold team logos only. There were no names on the gear, much less numbers. I showed the ad to the guy behind the register, and he just shrugged. It’s New York. What are you going to do? Well, I wrote Mr. Carter a letter and told him what happened. Then, indignation satisfied, I forgot about it.

That forgetting made it so sweet when one day at lunch a dorm mate said, “Beth! You have a letter from the Mets!” The Mets? Surely this was a joke or a scam. But I looked at the envelope and the return address seemed real enough, and when I opened it, a small photograph of Gary Carter fell out. It was signed, “Beth, God bless. Gary Carter.”

This small treasure is not framed or hanging on my wall. It’s carefully stored in the original envelope. I’ve never had the signature authenticated because it doesn’t matter. My heart knows the truth. In the middle of a championship season, a thoroughly decent man got a letter from a young seminarian and blessed her. I’ll never forget him. Let’s go Mets! 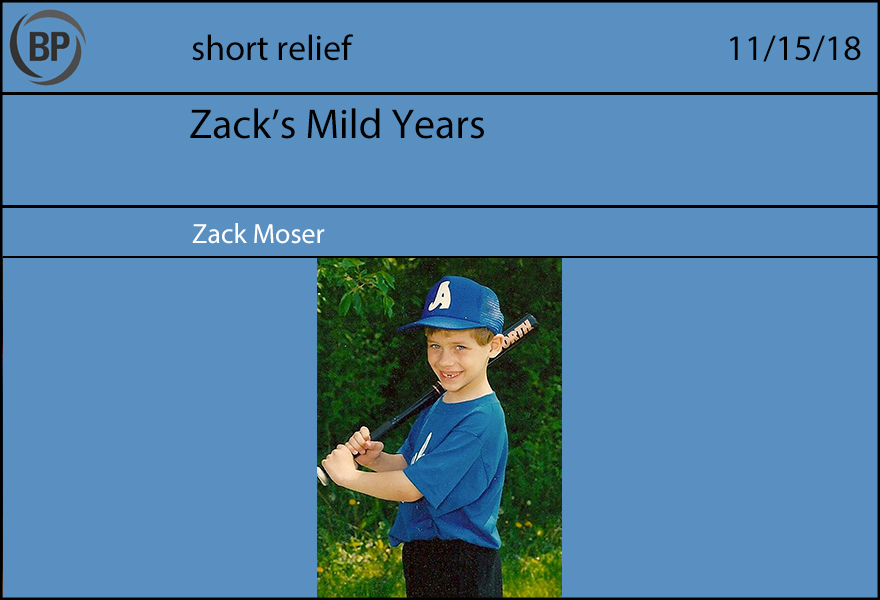 There are so many things to get mad about. It’s exhausting, really, and the amount of time I spend getting mad about things continues to grow as I hurl toward 30 more quickly than I could have imagined just a few years ago. Sustained anger—rage, contempt, resentment, rage, contempt, resentment—is trying on the mind and trying on the body. The physiological effects, I think, are those that I most chronically feel these days, as I stress about how crappy things are in the state of baseball, in the state of being a 26-year-old living in the United States in 2018. Anger-induced stress, and stress-induced anger. Hardly healthy.

This wasn’t always the case, of course, but before it wasn’t the case, it was the case, originally. In elementary school, I got into several playground fights for reasons that escape me today. In Little League, I was a hot-tempered kid who once was thrown out of a game because I unintentionally hit too many batters, prompting me to throw my glove over our team’s dugout fence. These aren’t things I remember much about, nor are they things I’m eager to share with even my good friends. After all, I eventually mellowed out and grew a greater capacity for patience, learning to channel my feelings in less destructive ways. It’s ancient history!

These days, I feel angry, but not in that middle-school way—a small spark of anger turning into negative consequences for myself or others, actions for which repentance is relatively easy because the causes are so inconsequential. My adult anger is more difficult to shed, maybe because it’s more simple and justified. It’s been difficult to find joy in baseball lately, for reasons more eloquently stated by Patrick and others. I’m mad about my favorite team imposing artificial limits on their player payroll as an anti-labor tactic; I’m mad about that same team’s weak public response to their shortstop’s abuse of his ex-partner. I’m mad, too, about the failure to renew the Violence against Women Act, adversely affecting the work we do at my day job. I’ve felt helpless more often, and, as a result, I’ve expressed myself outwardly in much more negative ways.

It’s that last bit that I feel most acutely. Frankly, I’ve been ashamed at times of how I’ve acted toward other people, and I’ve been feeling bad about feeling bad about baseball. I don’t want that to affect others in a counterproductive, negative way. It’s nice to be someone people want to be around.

There are so many things to get angry about, but I’d like to do better on my part. There’s another season on the way.