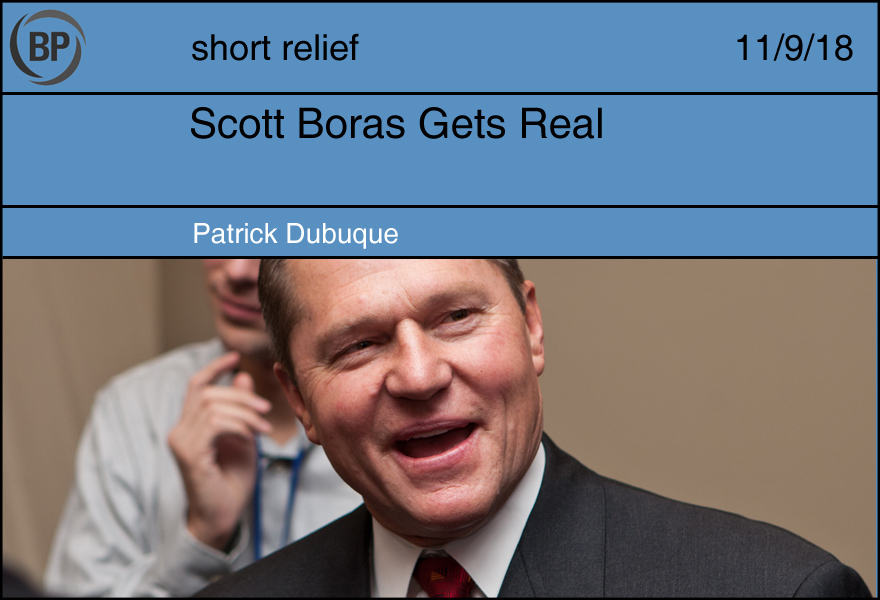 There was a lot going on, verbally, yesterday in baseball. The offseason bell was rung in the traditional fashion, with the ceremonial sad Rays-Mariners trade, and every GM gazed upon the dozens of thirtysomething second baseman that comprise the free agent market. Fans and reporters, meanwhile, girded themselves for another long winter, suffering from baseball’s economic version of climate change, one where the stars so recently marketed as the soul of the game are addressed as interchangeable and replaceable. In such inhospitable environs, only the careful colloquialisms of Scott Boras can keep us warm, or at least keep us moving.

Boras fired his usual shotgun of buzzwords at the crowd, talking up Bryce Harper and down Brodie Van Wagenen. But his main salvo was pointed at a much larger target, the marketplace itself:

“We have a cancer” says Boras about a system in such things as the draft that rewards systemic losing. Said teams that try to win and say go from 65 to 75 wins should be rewarded.

Despite the recent success stories of the Cubs and Astros, you’re not going to find many people out there who are just going to support tanking. I doubt the teams themselves are thrilled with the idea, even though they’ll happily accept the payroll savings while they restock the system. But despite this lukewarm opposition, it’s unlikely that Boras will find much success in attacking the systems behind baseball’s cyclical tendencies, in part because they’re systemic and no one cares about systems, and in part because the principal actors in any system like systems, especially systems they’ve learned and can predict. It’s the same reason why political parties have no incentive to introduce campaign finance reform: change creates chaos, and chaos is bad for incumbents, either existing or prospective.

Tanking is a cancer, even if the talk of it tends to be overblown. The system is broken; it’s not that the desiccated Tyson Ross of 2019 deserves ten million dollars, it’s that he deserved it five years ago, coming off a four-win season, and the laughable arbitration system built on an escalation of club control granted him a mere two. Pre-arbitration cost control is theft. And yet to dismantle this flawed system, to propose something new and scary that all thirty teams and a player’s union would have to wrap their heads around and agree to, is impossible. It’s pointless to even discuss, people say. Teams should tank, loyal fans will shrug, because that’s how you win.

There has always been this argument, and there have always been these people, on the periphery of every collective action problem in the history of mankind. The political philosopher Henry Walzer, in his treatise on morality in war, Just and Unjust Wars, devotes his first chapter to them, because they’re the ones who say that anything goes in war: mustard gas, bombing civilians, whatever it takes. These are the kind of folks who are okay with trading for Roberto Osuna. They call themselves realists, because realism somehow carries some positive connotation. These people are toughened and wise. They understand the world and see it for what it is. And so they base themselves on the worst kind of conservatism, the right-wing version of anarchy: a political philosophy of negativity that states that how things are is how they have to be. It’s not about preserving heritage or good; there’s no use in trying to change anything.

It’s not easy trying to find an incentive for 75-win teams, as Boras would like. Basketball employed the lottery system, but baseball’s development process is a lottery unto itself; other than the first overall pick, nothing is assured. Attendance used to be the primary feedback for losing, but in the era of TV and digital rights, that’s no longer true. Relegation is cumbersome. Flags fly forever. But it’s a conversation we should have, that Boras is right to keep complaining about.

The thing about baseball is that baseball is whatever we decide it to be. And sometimes, it’s whatever we don’t actively decide, but the effect of unintended consequences. One of them, in this modern era, is the increase in the amount of certainty in the game: our ability to predict and measure has made it harder for the league’s Padres and Royals to dream. We can continue down this path, drill further into the minutia for competitive advantage; we can also introduce our own chaos, add new elements of uncertainty, to make 75 wins (or at least 85) palatable again. There are no Founding Fathers for baseball’s systems, no divine ordinance that makes things the way they are. We should keep working to find a fairer way, and maybe create a baseball that people enjoy a little more, and don’t have to lose a year of every couple decades over a strike. Which we will, soon, as sure as the oceans are rising. 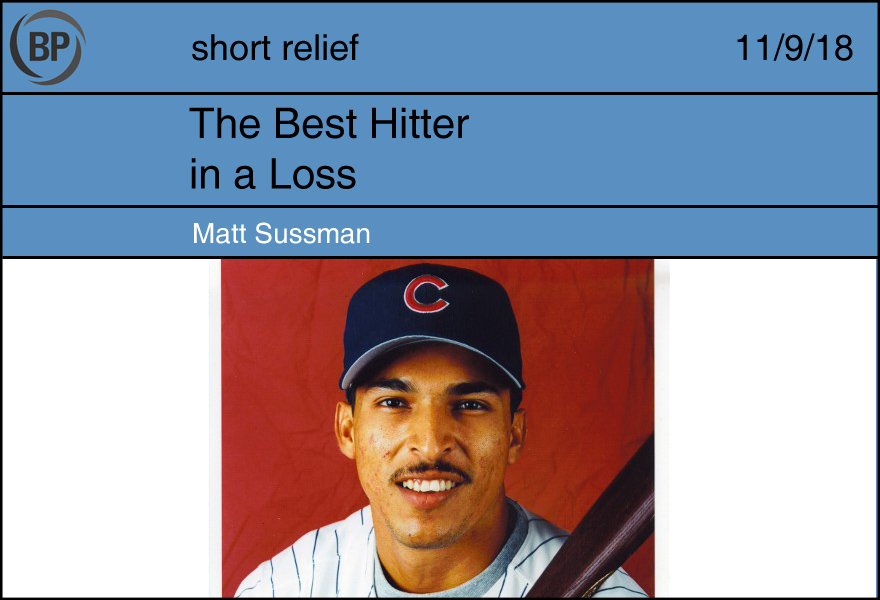 They have baseball splits for each player in wins vs. losses for some reason. Probably because they can. Sometimes a point is even made about it. Player X is so good in wins but so bad in losses. Why is that? Don’t overthink it too much or you may accidentally start a global warming straw man argument.

No, the split was built, I am certain, to see if the opposite ever held up. I fired up Play-Index to see if anyone ever did really good in losses but piddly poor in wins. I discovered José Nieves. He was one of the plentiful light-hitting shortstops that played for the Cubs and Angels at the turn of the century. No, the recent one, not the other one. In 2000 he was the utility infielder for the Cubs, a team that finished sixth in the division at a time where only one team ever could finish sixth in the division. Nieves registered over 300 plate appearances. In wins he slashed .128/.148/.167. In losses, .267/.315/.782. Four of his five home runs were hit in losses. It was safe to say he never had any idea what all his teammates were always sad about.

In 2002 Nieves was on the Angels and also posted a better OPS, albeit barely, in losses than in wins. It was for this very reason, I am certain, that the Angels left Nieves off their roster. They wanted to win but didn’t want to see Nieves play horribly. That’s why they instead went with Adam Kennedy, who of course had a three-homer game in the ALCS.

For his career Nieves had a better OPS by .111 points in defeats than victories, and either fails to understand the goal of baseball, or completely understands it better than all of us, which is to hit the ball and have fun. The only other person to have such a disparate career OPS in this split is Tommy John, which just means we found another viable use for that surgery, but no practical application.