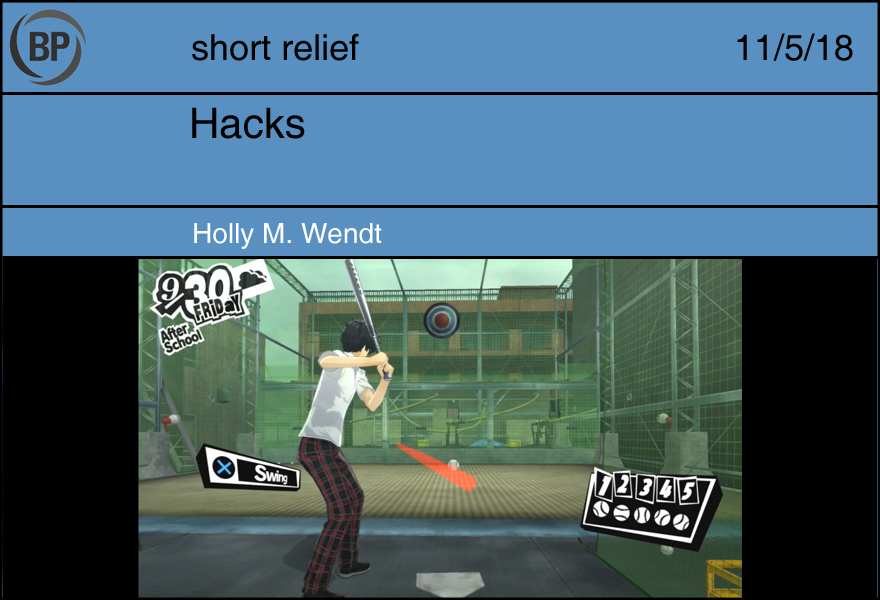 Upon its world-wide release on April 4, 2017—just 48 hours after MLB’s opening day in the same year—Atlas’s Persona 5, the latest installment in the popular Shin Megami Tensei franchise, catapulted into popularity. At its core, Persona 5 is a role-playing game with a turn-based combat system and an emphasis on strategically cultivating social bonds to boost various character stats and abilities. The protagonist and ensemble of compatriots harness their rebellious natures to combat adults who abuse their power—long story short, a team of underdogs and misfits save their world (a contemporary iteration of Tokyo) and try to survive high school while doing it.

Thematically, the game is weighty stuff. The first significant task is defeating a lecherous, megalomaniac volleyball coach who physically abuses and sexually harasses students and whose behavior, an open secret, is ignored by fellow teachers and administrators because of his athletics success. Though the game relies on myriad arcane, fantastical elements to execute its vision, its central conflicts are compellingly relevant and heartbreakingly familiar. And, in a way that feels unhappily resonant, the daily stuff of life must be managed during the game’s elongated narrative crisis: answering questions right in class, keeping the houseplants alive, finding time and energy to maintain relationships with friends and associates. While the game advances through its calendar and toward the various deadlines imposed (like defeating the volleyball coach before the school board meeting that might result in the hero-team’s expulsion), the player is faced with a constant choice: how best to spend your time. The strength of the protagonist’s social bonds and abilities is determined, in large part, by those choices. Will you hang out with this friend or that one after school? Will you study or put in hours at your part-time job?

Or will you go to the batting cages?

Around the corner from the protagonist’s home, up a narrow flight of stairs, is an indoor batting cage. For the not-inconsequential in-game sum of 500 yen, a machine tosses five baseballs, which one attempts to hit at a target, which would be located in straightaway center, if there was anything resembling a field. As in many minigames embedded in larger ones, expertise in the mechanics of actual gameplay will do you almost no good, but by mastering some other set of skills—here, a combination of aiming and timing—you can gain rewards. In this case, success in the batting cages improves your proficiency status.

At least, theoretically, that’s what happens. In my multiple visits, I’ve managed to make weak contact only a handful of times because my reason for loving RPGs with turn-based combat systems is that I’m not good at the games with complex button sequencing, the ones that take real coordination to target and fire—or swing, as the case may be—at the right instant. I prefer a game that requires me to solve a puzzle to shut down the scythes swinging across my path, rather than execute the correct combination of edge-edge-dodge-roll to skitter through. I play video games during baseball’s off-season to try to relax, after all. The difficulty setting on being a writer and an educator and a nonbinary person in 2018 is already high enough.

And yet, I keep going back to the batting cages in the game, even though each unsuccessful attempt costs me success somewhere else. In Mark Kingwell’s Fail Better: Why Baseball Matters, he writes, “[S]uccess in professional baseball is often a direct cause of failure in other aspects of life.” Kingwell, in his chapter, is alluding to the ways in which the rewards of immense physical prowess, the concomitant fame and power, and the extended boyhood our culture offers to certain young men and not others, is damaging in regards to personal development and accountability. In Persona 5, the game mechanics make this zero-sum circumstance a literal truth because game-time cannot be divided, cannot be re-allocated. Practicing for this batting cage is an actual expense and inefficient; five pitches is all you get, and one session (something that takes at most three minutes both in real life and in the game) consumes the entirety of your “after school” hours. And yet, as in real life, I find taking these swings satisfying, despite my near-constant failure and the knowledge that the same stats boost can be achieved in other, simpler ways. In my most recent set of hacks, I connected with more pitches than I did in any other. Practice, as they say—

There is still a staggering lot of game left to me, which means there is still time to spend and all this long offseason looming. Every time I pick up the controller, I know these are hours I could use better—a thing I could say of nearly every hour I spend—but pleasure has never been about efficiency. 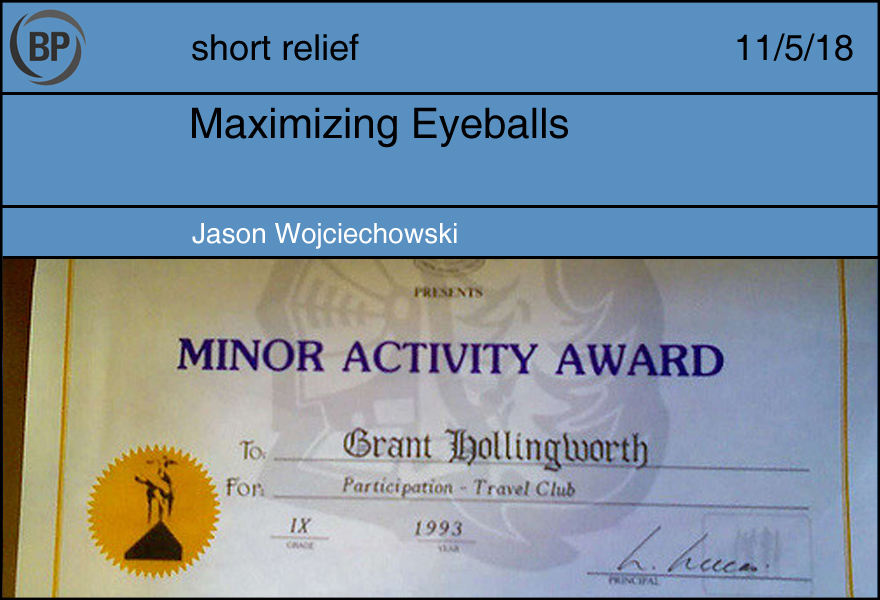 Yes, duh, obviously 9 p.m. eastern time on the Sunday night during football season when that’s going to feel like 10 p.m. because of the end of daylight saving is absolutely when we want to have a telecast for the winners of the Gold Glove awards. It is entirely clear, plain as day and also this incredibly dark night, that people will watch this show and that its airing will be a successful part of our grand design to Make Baseball Popular Again.

Here are the dates and times of the telecasts for the announcements of the remainder of the 2018 awards. Don’t forget to tune in.

Rookie of the Year: Tuesday, November 6 at 8 p.m. pacific, when the polls close in California and you’re watching the TV to find out the future of the country, you will also, via split-screen technology, find out who was the best of the future stars in Major League Baseball. Synergy!

Cy Young: Thursday, November 22, whenever your family is 17 minutes into Thanksgiving dinner. Space-age technology will ensure that each household in this great nation receives this broadcast at precisely the time when everyone is sitting down and together, the better to celebrate the greatness of Jacob deGrom. Sorry, Canadians, you’ll just have to call your closest American friend to find out what happened.

Most Valuable Player: At the next major natural or man-made disaster, three to seven minutes after all the channels go to live coverage of that event and its aftermath, the MVP awards will be announced with great fanfare and acclaim. Presently unscheduled, but sure to happen soon enough.