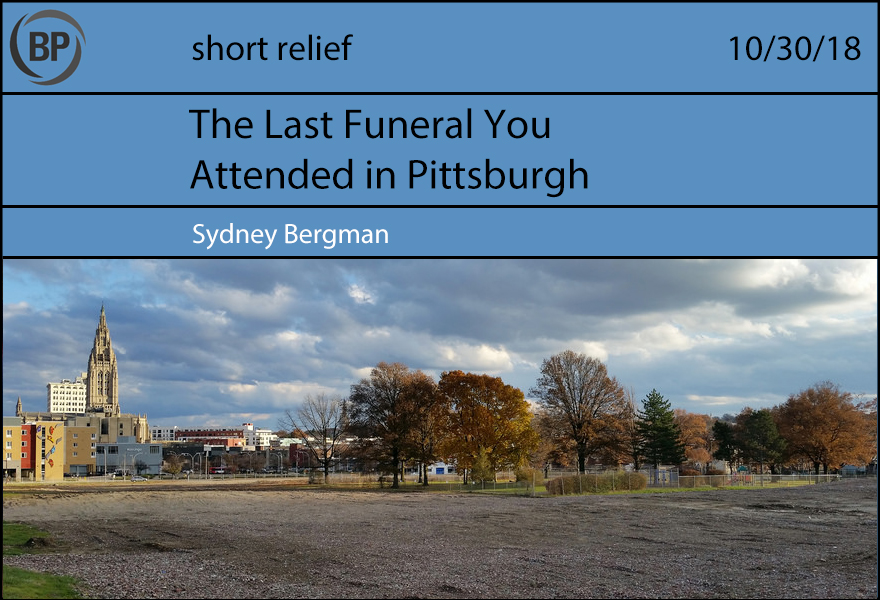 Don’t think about the last time you attended a funeral in Pittsburgh. Don’t think about your great aunt’s funeral on one of those cold gray days the city specializes in. A city with less sunshine than Seattle; a city clouded in funereal gray. Your sister stands next to you, and your shoes sink in the wet dirt. There’s not much said graveside, and you know what they’re saying anyway. The point of a ritual is to give you something to say when you don’t know what to say.

Your great aunt was old when she passed and always favored your sister over you. Mostly because you were obnoxious as a teenager, as a young adult. Still are sometimes. It’s not one of those funerals where people treat death as a tragedy. She was old and lived a long good life. Mostly, you just feel cold and damp, Pittsburgh feelings. You think about the last time you saw your great aunt and wonder if you were obnoxious to her, the way you’d been when you’d hiked up the big hill to her senior living facility to pick up two tickets for Rosh Hashanah. You probably were.

The sky is slate gray, raining or at least not not-raining. You’re a little bored, and know that you’ll have to go to your relatives’ house after. There will be food, and you’re in college. Anything not cooked by campus food services or your own instant pot is good. The food will be good. That’s how you process grief — carbohydrates. That’s also how you process joy, anger, disdain, and boredom. Your aunts and cousins will sit and tell stories about your great aunt. It’s one of the best and worst things about funerals — it makes you think about what people will say about you after you’re dead. About what you’ll say about your family.

There’s a gravestone next to where you’re standing, something new and unweathered. You read it and plaster a hand across your mouth to keep from laughing. On it, two crossed bats. An inscription that says “Beat ’em Bucs.” A Pirates fan, forever. You wonder what archeologists will say when they dig up this part of the Jewish cemetery.

It’s funny, the kind of thing that’s not really funny until you’re standing on a gray hillside overlooking a gray city, surrounded by family, at something where you absolutely cannot laugh. You nudge your sister because you want to share the absurdity of it, of loving baseball the way that people who cite themselves as mothers and wives and sisters on their tombstones. Baseball as your most enduring relationship, your legacy.

Later, you realize that a grave marker that says “Beat ’em Bucs,” is the kind of grave marker people pick out for themselves, something drafted when you know death is coming and can prepare for it. Of needing something to say, and finding the exact words, even if other people find them silly. At your cousins’ house, you eat carbohydrates and listen to your relatives talk. They tell stories about your great aunt and even the bad ones sound good.

Years pass, and on a Saturday morning, you sit at brunch listening to your friends talk about their latest home repairs. They look at you like you might cry because you’ve been crying. They hug you, and you try not to think about any of it, especially the last funeral you attended in Pittsburgh, and the power of choosing how the world remembers you, and of that power denied. 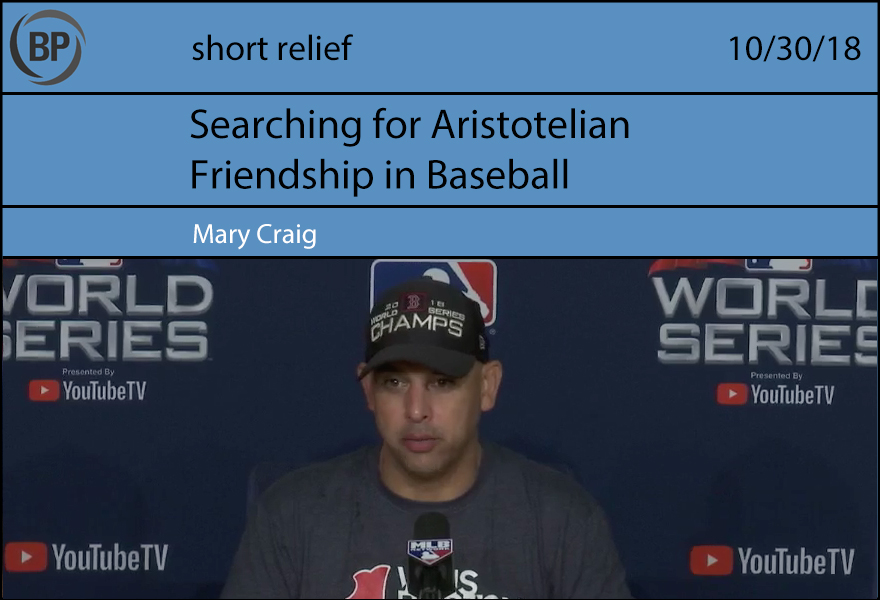 The third type of friendship, that of virtue, is the rarest and most prized of the three. It is a complete friendship, wherein the participants wish good for each other for the sake of the good. Like the two incidental friendships, friendship of virtue is both pleasurable and useful insofar as the virtuous find the good useful and pleasurable for itself. However, these friendships are enduring, lasting far beyond the removal of the material use or physical pleasure. They are built on mutual trust, common activities, and a shared interest in the good.

As with life, professional baseball bears many examples of incidental friendships, consisting of utility and pleasure. Owners band together in friendship of utility to acquire bargaining power over players; those, like Peter Angelos in 1994, who do not adhere to this bond are hated by the others.

Likewise, players on major-and-minor league teams bond over superficial emotional aspects, like the pleasantness of playing baseball together. We see this kind of friendship embraced repeatedly in sports media; teams who win are frequently described as possessing more camaraderie and having more fun together than teams with losing records.

Both of these types of friendship pale in comparison to friendship of virtue, which is perhaps rarer in professional sports than in daily life. Even within Major League Baseball, the sport most closely designed to facilitate the friendship with its languorousness and focus on the whole being greater than the sum of its parts, contains only glimpses of such friendships. Of course, Aristotle asserts that despite their necessity in crafting political communities, virtuous friendships by nature cannot exist within power imbalances or among the many.

Yet, every so often, we uncover an anecdote or story that gives us pause and makes us question the exclusivity of Aristotle’s friendship of virtue. We forget the fact that Major League Baseball operates on friendships of utility and pleasure and reach out to grasp the virtuous friendship before it disappears:

The sense of camaraderie built throughout the spring, particularly over concern for closer Craig Kimbrel’s daughter, Lydia, who required a heart procedure. When Kimbrel left the team in February, Cora and other members of the Red Sox remained in regular contact with him.

“He’s been a friend, he’s been a manager, and he’s put my feelings and emotions in front of a lot of things,” said Kimbrel. “You talk about family, my family at home, we went through a lot, but I was able to cling to the family I had around me here all year long, the guys I spend most of my time with. Those guys were big for me all year.”

In a sport defined by its ills, from the reserve clause to banning women and Black players, it’s these moments that allow us to keep watching in hopes that one day, we’ll know for sure that Aristotle was wrong.

You need to be logged in to comment. Login or Subscribe
Llarry
It wasn't an aunt, but my grandmother, and I was 7. "Beat 'em Bucs" isn't on the gravestone, but it was a catchphrase she taught her parakeet to say. But yeah, I hear you.
Reply to Llarry
John Collins
I really enjoyed the rumination on Aristotle and friendship. Thanks, Mary.
Reply to John